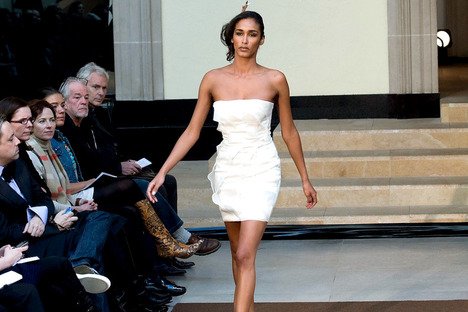 Eatons attempted its aubergine-tinted reinvention at the beginning of the decade, but even Floria Sigismondi’s art direction and a mod lower-case “e” logo couldn’t save it. Here’s hoping The Bay’s revamp, including this fall’s reopening of The Room and rumblings of a partnership with Top Shop, yields better results.

Street-style photography isn’t anything new, but it took the blog boom to turn everyone with a digital SLR into a pseudo-sartorialist. The decade ends with Toronto favourite Tommy Ton at the head of the fashion shutterbug pack.

Come Up To My Room, the Gladstone’s alt design event, launched in 2003, and MADE opened on Dundas West in 2006, creating a dynamic Toronto design community and signalling we were ready to fill our pads with locally sourced housewares

Our once starved-for-fast-fashion city now feasts on cheap and cheerful buys from American Apparel, H&M and Urban Outfitters. Local entry Joe Fresh arrived in Loblaws stores in 2006, but we still find the sight of grocery carts cruising by clothing racks kinda weird.

Toronto has a Fashion Week? Before the Fashion Design Council of Canada pitched its catwalk tent in Nathan Phillips Square in 2007, the city could be excused for being oblivious to our twice-yearly celebration of clothing and cattiness.

6. Turning on the Runway

Who knew watching attention-starved designers bitch each other out across the cutting table week after week would be such a reality TV sensation? Heidi Klum did. And Iman. And Evan Biddell. And sew on and sew on.

Institutional architecture in Toronto wasn’t a complete bore before the decade’s SuperBuild-funded development boom. (I like U of T’s Robarts Library, dammit!) But Will Alsop’s OCAD, Daniel Libeskind’s ROM and Frank Gehry’s AGO gave the city’s armchair design critics lots to gloat/whine about.

8. Hip to the trends

Metrosexuals’ perpetually reshaped facial hair was the only rival to the spectacle of hipster fashion through the decade. From fluorescent nu rave to unwashed hoser chic and sulking androgyny, it was a very good show.

The colour green was rarely in vogue, but eco-fibres like hemp, Tencel and bamboo, recycled vintage, accessories made out of everything from potato chip bags to skateboards and local labels galore made it increasingly easy to dress green.

The city’s editors, designers, stylists, photographers and door crashers filled their social schedules with a dense nightly lineup of openings, launches, catwalk shows and style-centred charity galas like Powerball and Fashion Cares. What is this, New York?