As the principal director of Monty Python's feature films, he did more to shape the troupe's comedy than any other member – and inspired George Harrison to launch HandMade Films 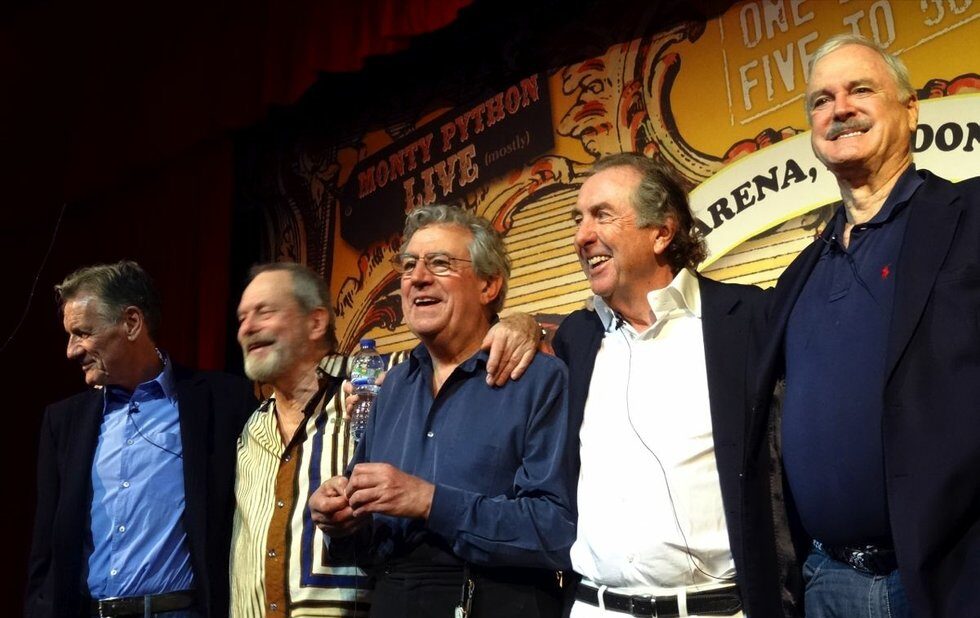 Jones, who was diagnosed with frontotemporal dementia in 2015, leaves behind a truly staggering legacy: Not only was he a founding member of Monty Python alongside Graham Chapman (who died in 1989), John Cleese, Terry Gilliam, Eric Idle and Michael Palin, but he directed or co-directed all three of the troupe’s original features: Monty Python And The Holy Grail, Monty Python’s Life Of Brian and Monty Python’s The Meaning Of Life. (Python’s first film And Now For Something Completely Different, was a collection of their TV sketches, re-shot by the show’s director Ian MacNaughton for theatrical release.)

It’s as a Python that Jones will be best remembered, and that’s entirely fair: the troupe’s impact on sketch comedy was seismic, mixing absurdist premises and highbrow references with razor-sharp insight into the puffed-up British identity of the 60s and early 70s.

But his work behind the scenes is just as important. As the Python behind the camera – frequently in collaboration with Gilliam, who co-directed Holy Grail and the short film about accountant pirates that opens The Meaning Of Life – he did more to shape the troupe’s work, and the way it was received, than any other member.

And Jones’s status as the director of Life Of Brian means he gets the lion’s share of the credit for creating one of the most controversial movies of its age: the 1979 comedy about an ordinary child who has the misfortune to be born on the same night as Jesus Christ and spends his entire life being mistaken for the Messiah was pilloried, protested and picketed on its release by Christians who called it blasphemous.

It wasn’t, of course – Jesus himself is a peripheral character in the film, and the Pythons’ real ire is reserved for bureaucrats, people who follow false prophets and the people who look to exploit those people. But good luck explaining that to an angry mob – which is also something that comes up in the movie.

Fun fact: Life Of Brian also led George Harrison to form the production company HandMade Films. When EMI refused to make the film, the project was on the verge of collapse before  Idle reached out to the former Beatle for the money. Harrison, a Python fan, obliged – calling it “the most expensive cinema ticket ever issued” – and wound up enjoying the experience so much he kept on making movies, including Terry Gilliam’s Time Bandits, Neil Jordan’s Mona Lisa, Bruce Robinson’s Withnail And I and How To Get Ahead In Advertising and the Python documentary Live At The Hollywood Bowl.

Between Python projects (and, later, reunions), Jones worked on a variety of television shows and films. With fellow Python Palin, he co-created the very silly and very charming BBC series Ripping Yarns in the mid-70s, only to see it overshadowed by the success of Cleese’s Fawlty Towers. On his own, he directed the comedies Erik The Viking and Personal Services and a very odd live-action adaptation of The Wind In The Willows in which he played Mr. Toad. He also wrote a number of books, among them a novelization of the videogame Douglas Adams’ Starship Titanic that’s quite funny.

I met Jones in 2015, when he came to Hot Docs with the Python documentary The Meaning Of Live. While his dementia diagnosis wasn’t yet public, I was warned beforehand that he wasn’t well and might have difficulty speaking filmmakers Roger Graef, James Rogan and Holly Gilliam (the other Terry’s daughter) would do most of the talking. That is indeed what happened, but Jones was warm and engaged in the conversation, even if he didn’t say much.

And when he did start to address his illness, Jones made it count: this Guardian 2017 interview, in which he’s accompanied by Palin, is painful and honest and ultimately quite beautiful, laying out Jones’s condition as he was experiencing it while still demonstrating his essential self remained undiminished. (“He loves seeing friends,” his daughter Sally told Robin McKie. “His only problem is that he no longer has the ability to tell them how pleased he is to see them.”)

There’s a thread in The Meaning Of Live about Jones and Cleese growing estranged over the decades, and how they finally reconnected during the Pythons’ 2014 concert tour Cleese ultimately appeared, sort of, in Jones’s final directorial effort Absolutely Anything. It’s an utterly forgettable comedy, but it’s now the final assembly of all five surviving Pythons, voicing the CG aliens who grant limitless power to a hapless Simon Pegg.

It’s heartening to know Jones was able to make peace with the people who mattered to him, while he was still able. It softens the loss, just a little.