In the latest episode of the NOW What podcast, the creators and stars of CBC's new comedy series discuss the show's creation, and where the Pham fam are going in the first season. 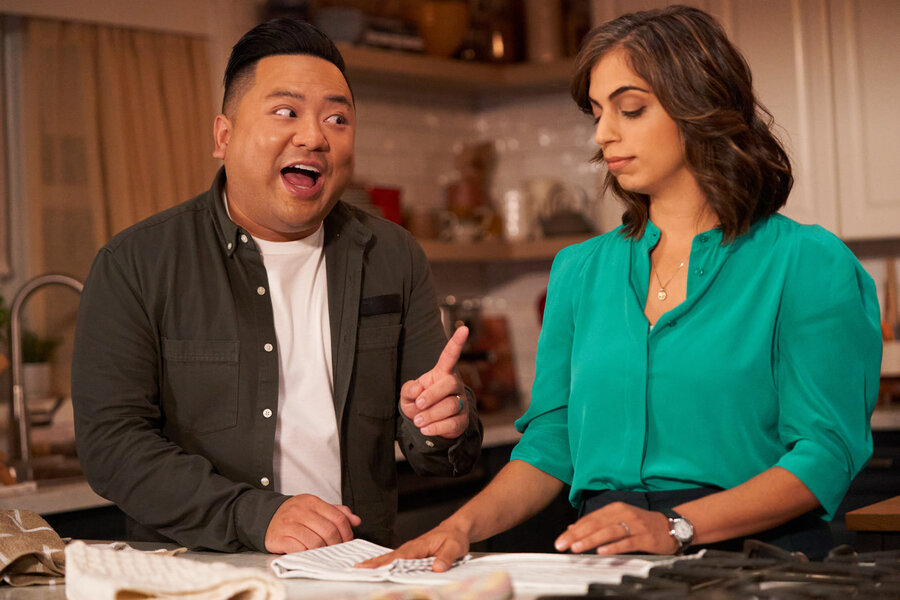 Andrew Phung and Rakhee Morzaria as Andrew and Camille Pham in Run The Burbs.

If you’ve read this week’s NOW’s cover story on Andrew Phung’s new CBC sitcom Run The Burbs, you know how hard Phung and co-creator Scott Townend and writer/co-star Rakhee Morzaria worked to make the show’s world and characters feel both authentic and relatable.

On the latest episode of the NOW What podcast, Phung, Townend and Morzaria dig into the challenges of building the specific relationships between the members of the Pham family, which had to be done in rather heightened circumstances.

“The cast didn’t get together until like a week beforehand, basically,” Townend says. “So to have that sort of dynamic that they found, that was incredible… we had all these goals and dreams for the characters in the writing room, and they found it. A family that we wrote to love each other, that actually supports one another.”

“We had some extremely masked rehearsals,” Morzaria laughs. “Those really helped.”

Morzaria’s own path to co-starring in a network television series was similarly unusual. Originally hired as a writer on the show, she went up for the role of Camille Pham, Phung’s screen wife on the show. Morzaria got the part, but then realized she wouldn’t have a lot of time to figure out her chemistry with her co-star.

“Yes, we know each other from a while ago,” she says, “yes, we had a relationship in the [writers’] room, and we’re pals. But I was like, ‘15 years married?’ I wanted to have time to spend with Andrew to build that relationship.”

As it turned out, Phung was a little worried about that, too.

“Rakhee and I knew we could hit the comedy,” Phung says. “The scenes of her and I doing wild stuff, we always knew [we’d be fine]. But the [couple’s] intimacy, the connection – we checked in a lot on those types of things. And I want to give credit to Rakhee, because [she] just embraced the maternal instinct with Roman and Zoriah. Always just supporting them, being silly with them, doing TikToks with Zoriah and checking in on Roman. Like, like I remember we did the press day and you came up to me like, ‘Hey, Roman’s really nervous.’ Like, we got to coach them through it, and it was such a maternal thing to do. But you were looking out for them.”

“They’re kids!” Morzaria laughs. “This is new for them too. They’re my pals, I like them. They kept me grounded because they didn’t care when they were on set. They weren’t stressed at all about their lines… you know, Roman, you give him a note and he’s just like, ‘Okay!’