While walking through her East Vancouver neighbourhood, actor and filmmaker Elle-Máijá Tailfeathers happened upon a young pregnant woman standing in the cold rain. She was barefoot and clearly in distress while a man was yelling out violently in the distance.

Tailfeathers took the fellow Indigenous woman to her own apartment. They spent a few guarded and intense hours together while Tailfeathers searched for a shelter where the woman could facilitate her escape from an abusive situation.

“It didn’t work out that way,” says Tailfeathers, who never saw the young woman again. Tailfeathers spent years grappling with that moment, which is now the subject of The Body Remembers When The World Broke Open, the film she co-wrote and co-directed with Kathleen Hepburn.

“I wanted to do something with the experience and honour her story and other women like her,” says Tailfeathers of the film, which will have its North American premiere at the Toronto International Film Festival after debuting in Berlin earlier this year. Both Tailfeathers and Hepburn appeared in NOW’s Rising Screen Stars issue, where we initially discussed The Body Remembers.

Tailfeathers, who also stars in the Midnight Madness zombie movie Blood Quantum, initially intended to tackle her first narrative feature alone. She’s made documentaries and that vérité aesthetic is apparent in The Body Remembers. But the filmmaker also challenged herself to to tell this story in real-time.

In the lightly fictionalized recreation, Tailfeathers plays Aila, a version of herself, opposite Violet Nelson, making her film debut as Rosie, a pregnant young woman who grew up in the foster-care system and fiercely holds on to motherhood while weathering her circumstances.

The film is built from five takes cut to look like one long take. Each take ran through the entire narrative, keeping the actors in the moment. Tailfeathers and Nelson performed as if on stage – except they were in multiple locations. As they moved, cinematographer Norm Li followed with a 16mm camera. He found moments to swap out cameras as the actors continued their performance unbroken. Li dubbed the process “real-time transitioning.”

Even before considering the exacting precision required to pull off such a complicated feat, Tailfeathers decided to partner up on directing duties. Hepburn, a friend she shared an artist’s studio with, was finishing her own feature debut, the heart-wrenching drama Never Steady, Never Still. 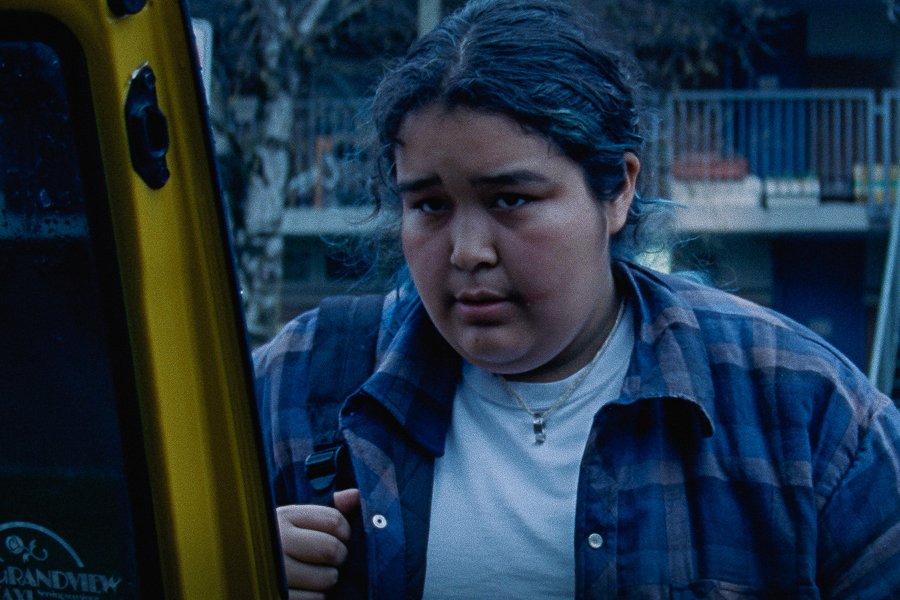 Violet Nelson makes her film debut as young pregnant woman in The Body Remembers When The World Broke Open.

The co-directors also have an endearing interplay where they tee each other up when answering questions. One lays the groundwork and the other lands the point. Their light-hearted and giggly demeanour is warm and surprising, only because – between Never Steady, Never Still and Body Remembers – these two are responsible for leaving me with far graver emotions.

In Body Remembers, they revisit Tailfeathers’ galvanizing experience, drawing us into that moment to witness the weighted encounter and leaving us to unpack all the social and political dimensions anchored to every simple exchange, from the gentrification in East Vancouver (the two directors consider themselves part of that problem) to the intergenerational trauma informing the characters. Very few things are spoken but the idea that authorities might take the child due to Rosie’s precarious situation is just one thing that lingers in the subtext.

“The core of the film is about love, motherhood and sovereignty of the body,” says Tailfeathers, “being able to have the right to choose to have a child and have the right to raise that child. It’s been this fundamental rupture of Indigenous community: this removal of our children, this fracture of our families and our communities, which has done so much damage.”

Tailfeathers and Hepburn turn the discussion toward foster care, specifically what happens when youth age out of the system, cut off from support after they turn 19.

“This leaves youth – young women in particular – especially vulnerable,” says Tailfeathers, who points to a BC report that found youth deaths occurred at five times the rate among those aging out from care. “Rosie’s situation speaks to the myriad ways in which young Indigenous women are further pushed to the margins, ultimately facing life-threatening realities.”

Tailfeathers also went into this narrative recognizing the disparity between herself and the woman who inspired Rosie.

“I’m not untouched by the legacy of colonialism,” says Tailfeathers, “but I was never in foster care. I never witnessed domestic violence at home. I went on to get a university degree. I have a mortgage, a car and a poodle. I live a very middle-class, comfortable life in many ways. When I encountered this young woman, that day was a total confrontation with my own privilege.”

With that in mind, Tailfeathers and Hepburn set out to create Rosie in a way that young Indigenous people would find authentic. Part of that process was casting Violet Nelson, who was in the foster care system while her mother struggled with addiction and domestic violence. Both are in a good place now.

But before casting Rosie, Tailfeathers and Hepburn acquired a grant so that they could host a paid workshop. They invited young Indigenous women – some of whom had been through the system – to provide  input on the script.

When it came time to shoot, they received another grant to offer paid internships so young Indigenous artists could work alongside key crew members.

“[The idea] initially came from this obstacle that we faced as filmmakers,” explains Hepburn, “wanting to hire Indigenous people in our key crew positions and then not having enough people to actually fill those positions. So we wanted to build capacity within the industry.”

Tailfeathers and Hepburn explain that while there are many talented Indigenous writers, directors and producers, there aren’t enough in the craft sectors.

“Ten years down the road,” says Tailfeathers, “we want to know that there’s going to be more than one Indigenous sound person, editor and production designer.”