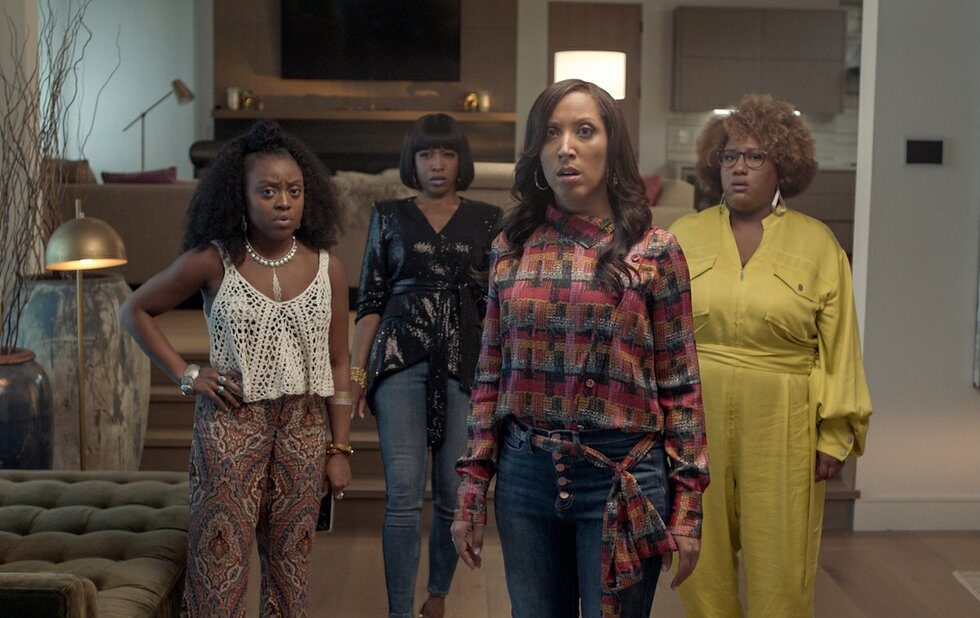 Black-led sketch comedy shows have enjoyed off-and-on spurts of glory for decades, from the trailblazing In Living Color to Chappelle’s Show and Key & Peele. All have helped launch or cement the careers of Black male comics, but none have done the same for their female counterparts.

Now we have A Black Lady Sketch Show, a late-night HBO series with an all-Black, all-female cast and writing team – the first of its kind. Created and helmed by comedian Robin Thede, directed by Dime Davis (and co-executive produced by Insecure creator Issa Rae), ABLSS features a stellar core ensemble cast of Thede, Ashley Nicole Black, Quinta Brunson and Gabrielle Dennis. It will be interesting to see if ABLSS catches on and spawns breakout stars, something Saturday Night Live and other mainstream sketch shows have yet to do for Black women comics.

HBO has clearly spared no expense with glossy, Hollywood-looking sets that take the women convincingly from a Motown stage in the late 60s to a baseball field in the 30s and modern-day CIA office. The gorgeous production supports a diverse cast of characters that the women bring to life.

An end-of-the-world skit, featuring the women as themselves holed up in Thede’s apartment, runs throughout the six episodes. The skits between these segments feature the foursome mischievously satirizing a wide variety of topics: Black love, rigid ideas of Blackness and beauty, Black-owned businesses, cancel culture, viral proposals, Black TV shows like 80s sitcom 227 and the church.

They play dozens of roles, including men. Whereas male comedians have a long and celebrated history of playing women, this kind of sketch-comedy drag is a domain few female comics have left a stamp on – and few are as good at playing men as Thede. From her flat gaze to her swagged-out slouch and wide-legged stance, she embodies exaggerated masculinity without any attempt to downplay it or make it more comfortable for viewers by retaining some femininity.

Many skits are based on inside jokes many Black women will instantly get: to wear a hair-protective bonnet at night or not the search for the ever-elusive Black female therapist and can you still watch The Cosby Show for Lisa Bonet even though Bill Cosby was convicted for sexual assault?

Others are more universal: attending a high school reunion while secretly longing for the adoration you never got as a teen and with who (and how) would you spend your last days if the world was coming to an end? The result is a season of assured writing, clever sketches and hilariously memorable characters.

Some skits pay off instantly. The Bad Bitch support group, featuring Angela Bassett and Laverne Cox, is a smartly written and performed, meme-ready skit complete with unforgettable lines like, “Is a partner that doesn’t appreciate the cheekwork deserving of the cheek twerk?” The Get The Belt reality competition, featuring exasperated parents and sassy children, makes sport of contentious power dynamics between kids and parents. And the Basic Ball sketch – starring Caldwell Tidicue (Bob the Drag Queen) – spoofs the vogue ball scene by celebrating the least fabulous “LGBTQ cuties” voguers one can find. Sweat pant-clad women in the throes of depression and chubby barbecue daddies bring the house down with their dreary plainness, all while Tidicue says things like: “I’m looking for sadness. I’m looking for Eeyore in Dior.” The outrageous humour brilliantly upends the assumption that LGBTQ people are fabulous at all times. It truly is everything.

By the third episode, each cast member has introduced a character aiming for fan-favourite designation.  But the standout is Black’s CIA agent Trinity, the invisible spy, who is renowned for using sharp wits and “regular” looks to take down crime conglomerates. It’s a sharp commentary about how women are often recognized or dismissed solely based on looks, while illustrating that looking “regular” has nothing to do with being basic.

Both Thede and Black are scene stealers. While Thede thrives on broad parodies and outrageous characters, Black’s brilliance comes in her subtle transformations and timing. She’s the needy girl with the vocal fry at the high school reunion whose hot-girl transformation and bravado quickly falls apart the minute she’s ignored. She’s the nosy security guard at your office, whose smile you see a mile away and dread having to chit-chat with.

Not all skits land. A lesbian club skit featuring Thede and Brunson starts off strong but then a pivot into sci-fi falls flat. And a promising breakup sketch featuring singer Patti LaBelle becomes one of the few times the celebrity guest appearance is more about “look at this huge star we’ve got” rather than the punchline.

Ultimately, Black lady viewers will get the inside jokes, but there are enough laughs to go around for all viewers.