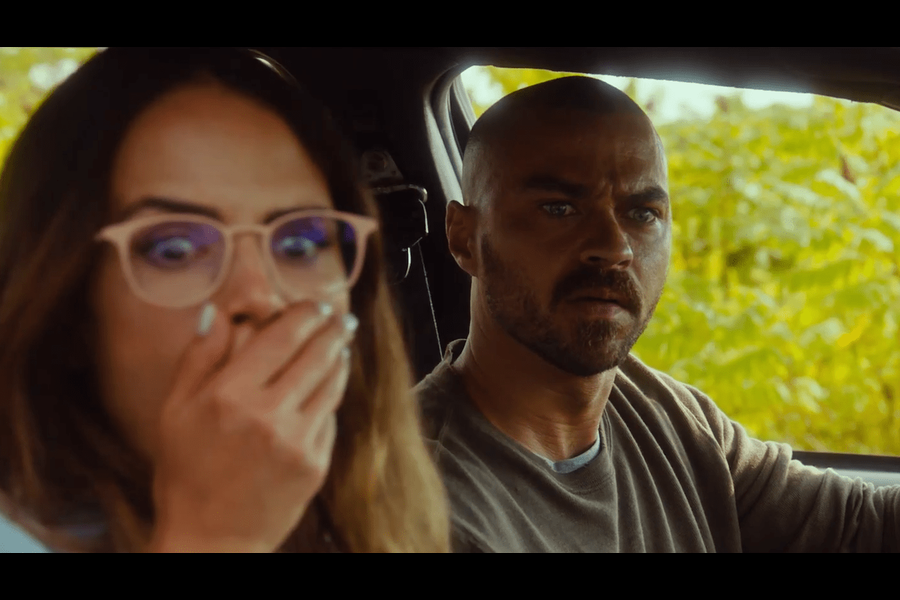 If Goon: Last Of The Enforcers was meant to give fans more of the thing they liked, Random Acts Of Violence is all about asking a different subset of fans why it is that they like their thing – and whether they’re really prepared to consider the ramifications.

There’s something dark and unsettling slithering around inside Jay Baruchel’s second feature, adapted by the actor/director and his writing partner Jesse Chabot from a 2010 comic by Jimmy Palmiotti and Justin Gray.

Comic writer Todd Walkley (Jesse Williams), his girlfriend Kathy (Jordana Brewster), his assistant Aurora (Niamh Wilson) and his publisher Ezra (Baruchel) are on a road trip from Toronto to New York derailed by a string of murders directly inspired by – or perhaps connected to – Todd’s nightmarish stories of a serial killer called Slasherman.

The premise is comfortingly familiar, but the execution is anything but: Baruchel doesn’t treat either the murders or Todd’s traumatizing childhood backstory as excuses for showy camerawork or elaborate set pieces, instead depicting the brutality of physical violence as ugly, frenzied and cruel.

This might divide horror fans looking for some stylish splatter, but I found it genuinely thrilling to watch Random Acts Of Violence refuse to slot itself into a recognizable genre framework, and just push forward with its mission. Baruchel knows what he’s doing, steering the action into messier, nastier territory and dragging the viewer along with him.

Even the requisite “we should go to the cops” scene is handled with a rabbity, uncertain energy, the actors yelling past each other as their characters’ panic mounts: it’s like watching a punk band play a waltz.

As the bodies start piling up, the narrative fixes tighter and tighter onto Todd, and Williams (Gray’s Anatomy’s Dr. Jackson Avery, of course, but also Holden from The Cabin In The Woods) offers a study in sweaty desperation as our hero is challenged, over and over again, by questions of his culpability in the murders.

He’s not the killer – this isn’t that kind of movie, thank Christ – but the violence is literally inspired by his comics, the bodies staged post-mortem to mimic Holden’s grotesque images. And even if his comics are his therapy, a method of coping with a deeply buried personal trauma, does he think he’s gone about that therapy in the most responsible way? That’s something both Baruchel and his star have thought about, and they want to leave it with the audience thinking about it too.

I don’t know that Random Acts Of Violence sustains itself all the way to the end – the climax ultimately fully embrace a certain type of horror trope – but it’s a daring choice to even try to do something like this. I just wish I’d been able to see it with a crowd, but you can’t have everything.