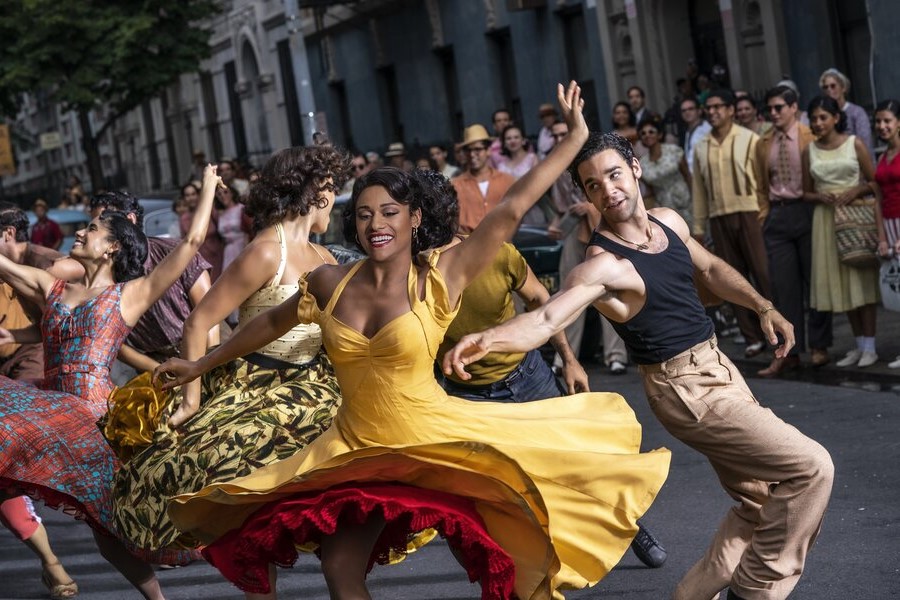 Ariana DeBose as Anita, with David Alvarez to her right as Bernardo, in Steven Spielberg's West Side Story.

West Side Story is Steven Spielberg’s first musical, officially speaking, but he’s always been making them; 1941 has a spectacular jitterbug dance sequence that turns into an even more spectacular brawl, and of course Indiana Jones And The Temple Of Doom opens with Kate Capshaw belting out Cole Porter in Mandarin in the greatest number Busby Berkeley never made.

And beyond that, think of all the ways the producer/director has married kinetic filmmaking to his scores and soundtracks. Quint firing barrels into the shark in Jaws is a musical number; the market fight and truck chase in Raiders Of The Lost Ark are musical numbers, complete with applause. And of course Close Encounters is full of characters singing to strangers, hoping they’ll like what they hear; its climax is an interplanetary duet.

Spielberg’s new version of the Stephen Sondheim/Leonard Bernstein musical – a Romeo and Juliet story set among the street gangs of 50s Manhattan – isn’t a remake of the Oscar-winning 1961 adaptation but a complete reinvention of the text. Directors Robert Wise and Jerome Robbins brought the play to the screen; Spielberg and screenwriter Tony Kushner bring it to life.

Watching this new West Side Story is like encountering a brilliant new remounting of a classic work; its makers understand not only what the writers intended, but find new ways to shake the material to life, recontextualizing songs with new locations and intentions, and letting the audience’s love of the source text inform this new experience. The Jets and Sharks still dance, of course – Justin Peck’s choreography is based on Robbins’s distinctive balletic movements – but the violence they inflict on each other is less stylized and more visceral.

Six decades later, it’s possible and even preferable to present this story without softening the racism and loathing that drives it; Shakespeare’s narrative was cruel, but in a way Sondheim and Bernstein’s is even more so. Romeo and Juliet were young and foolish, convinced their love would save them; Tony and Maria – now played by the decent-enough Ansel Elgort and a radiant Rachel Zegler – are acutely conscious of the worlds in which they’re trapped.

Not that this film is a misery, mind you. Its sadness is entwined with the play’s cynicism, but Spielberg and his team make sure there are moments of explosive joy as well – moving the musical numbers from soundstage stoops and rooftops to bustling streets, building sites and dance halls. In the fastest, most upbeat numbers, Spielberg makes sure we see his cast delight in the rhymes flying out of their mouths, as though they can’t believe their minds have become as graceful as their bodies.

The exuberant daytime staging of (I Like To Be In) America returns the song to the propulsive, crowd-pleasing blowout it’s always deserved to be, with Ariana DeBose’s Anita bantering with beau Bernardo (David Alvarez) amidst a swirling chorus of dancers. Setting I Feel Pretty in Gimbel’s department store surrounds Maria with images of manicured whiteness that aren’t meant for her. She sings anyway, because this movie is about Puerto Rican characters refusing to be quiet and get along. As in most of his movies, Spielberg doesn’t bother to subtitle the non-English dialogue, trusting the audience to get the gist; here, the decision also seems essential to the movie’s sense of balance.

Which reminds me: Rita Moreno – who won an Oscar for her performance as Anita in the 1961 film – is here too, playing a new character named Valentina. It’s wonderful to see her walk into the frame, and to realize not just that she’s still as lively a performer as ever but in a film that’s willing to see her as more than just an echo of past greatness. Indeed, in the movie’s most unexpected moment, Spielberg stops the show for her – and she returns the favour.

Kushner’s script also finds notes of sadness in the songs that just weren’t there the first time around: as we see in a singularly shattering interpretation of Somewhere, this West Side Story is also about the sadness of understanding you won’t live to see the future you’ve been fighting for. All of this in a picture about people dance-fighting for a few measly blocks that are about to be torn down anyway. Who’d have imagined.