NOW MagazineMovies & TVReviewsReview: The Irishman is so good you can almost overlook the distracting de-aging

Review: The Irishman is so good you can almost overlook the distracting de-aging 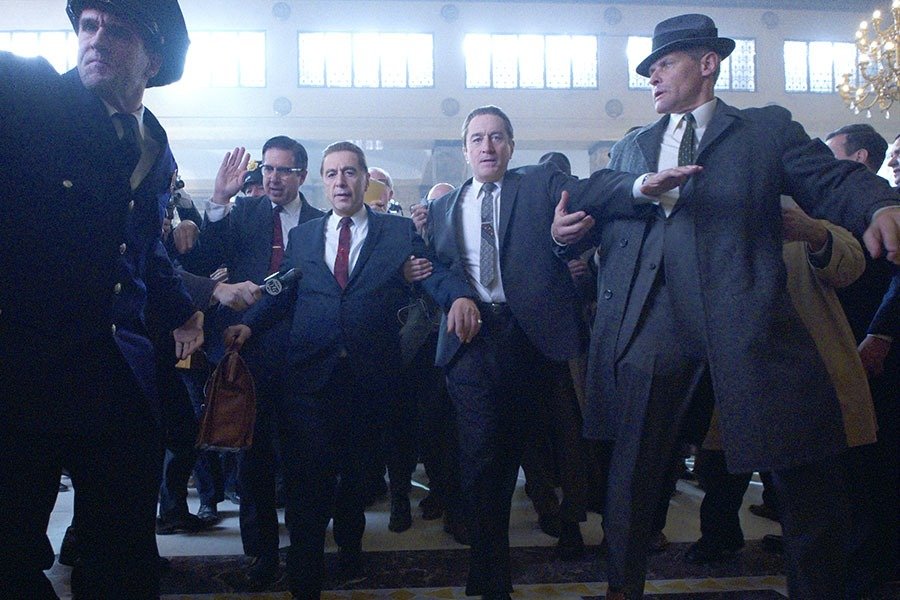 First, the bad news: although The Irishman makes the best artistic argument to date for the digital de-aging of actors, the technology isn’t quite there yet. Sometimes you get an uncanny representation of Robert De Niro as he looked in his 40s, sometimes Joe Pesci’s head seems to be floating on top of his neck.

As a result, the first half of Martin Scorsese’s epic American crime story – which stretches over some 60 years, from the early 40s to the early 00s – is not as easy to watch as it ought to be.

The opening movement of The Irishman is composed of long stretches set in the years after the Second World War, meaning the two actors – whose collective association with Scorsese runs all the way back to 1980’s Raging Bull – are tasked with playing decades-younger versions of themselves. Daylight scenes look like elaborate simulations, with the characters appearing younger but moving like the older men they really are the tech also fails to take cartilage into account, so their younger selves have the oversized ears and noses of senior citizens.

Neither does it help that De Niro’s character, Frank Sheeran, is a blue-eyed Irishman, adding another level of wrongness to his youthenized image the movie keeps showing us why it would have been less distracting to cast another actor as Sheeran’s younger self. (And really, Enver Gjokaj is right there.)

Later, when Al Pacino shows up in flashbacks to Jimmy Hoffa’s early rise, the smoothing algorithms don’t know what to do with prosthetics, flattening out the flesh over his artificial cheekbones so that his eyes seem to bulge out of his face, giving him a striking resemblance to his Dick Tracy villain, Big Boy Caprice. In which case, we’re still seeing the actor as he looked three decades ago, so I guess that means it’s working?

Anyway. The good news about The Irishman is that the rest of the movie is so strong that you’re willing to do the cognitive work required to overcome the distraction of de-aged actors. I also suspect it won’t be nearly as distracting on smaller screens once the picture arrives on Netflix at the end of the month.

On paper, The Irishman is a straight mob picture, a catalogue of larceny, theft, betrayal and murder both witnessed and committed by Sheeran during his decades in the Pennsylvania mob as an all-purpose guy for Russ Bufalino (Pesci). Deals are made, dues are paid, blood is spilled. A lot of blood, all without hesitation or question.

Steven Zaillian’s script, based on Charles Brandt’s book of interviews with Sheeran, I Heard You Paint Houses, follows the show-and-tell format Scorsese perfected with GoodFellas, Casino and The Wolf Of Wall Street. From a vantage point in a Philadelphia nursing home, Sheeran walks us through his life story in detail: it all started when he scammed some beef from a refrigerated truck he was driving as a Teamster when pinched, he refused to name anyone else involved. That honourable act led Sheeran’s lawyer Bill Bufalino (Ray Romano) to introduce him to Cousin Russ a career was forged, as well as a side hustle supplying prime cuts to the likes of Felix “Skinny Razor” DiTullio (Bobby Cannavale).

Somewhere in there is Hoffa, whom Sheeran knew from the early 60s until July 30, 1975, the day the labour leader disappeared. Sheeran was placed with Hoffa as a combination minder and bodyguard when Hoffa and the Teamsters were being investigated by Bobby Kennedy’s justice department the two men became friends, bonding over their working-class roots. It didn’t end well, but this is a guy who kills people as easily as he drives nothing he’s involved with ends well for anybody else.

The rhythms of The Irishman are instantly recognizable once again, Scorsese is making an insider epic filled with details and textures that feel authentic and sharply observed, from the lighting scheme in the steak joints preferred by the Bufalinos to the curious contrast of Hoffa’s constant stream of petty grudges and the domineering insecurities of his primary rival for the Teamsters’ crown, Anthony “Tony Pro” Provenzano (Stephen Graham).

Everything rings true, with one crucial exception. We’re never invited to take pleasure in any of it. Sheeran’s home life – he married twice, and had four daughters – is muted and joyless, his youngest Peggy (Lucy Gallina as a child, Anna Paquin as an adult) forging a better relationship with Hoffa than her own father. There are parties and celebrations and vacations Sheeran barely cracks a smile. When he talks about his war service, he implies that it broke him somehow, but in the flashbacks we’re never given the sense he was ever whole.

The Irishman is a more mature version of GoodFellas, one where the vicarious fun of criminal life is absent, replaced instead with regret for the emptiness of that life. Imagine Henry Hill not ratting out his friends, and still ending up alone: that’s Frank Sheeran. Like Silence, the 2016 religious drama that’s starting to feel like Scorsese’s masterpiece, it’s a movie steeped in regret and self-doubt, made by an artist reckoning with the passage of time and the apprehension of what comes next.

Some critics have suggested the movie is Scorsese’s way of apologizing for glorifying unpleasant characters in his early films I think that’s a stretch, since movies like Taxi Driver and Raging Bull did a pretty good job of indicting their protagonists at the time. (Yeah, you can come out of GoodFellas thinking mob life is awesome, but you’re a fool if you don’t notice all the bodies piling up in the frame.)

But by focusing on the doomed friendship between Sheeran and Hoffa, and by continuing to tell Sheeran’s story well after his criminal career ends, rather than end on the narrator’s panicked escape as he did in GoodFellas, Scorsese refuses to let the character or the audience leave on a high. We’re just left there with Sheeran, decrepit and isolated and still incapable of truly taking responsibility for the damage he’s wrought. It’s thrilling to realize, maybe halfway through the picture, that De Niro is giving a real performance rather than coasting on past glories Pesci, almost a decade after his last on-screen appearance, is just as good, his quiet, un-insistent steeliness informed by the volatility of his earlier career.

And Pacino is Pacino as Hoffa, which is to say he peacocks his way through the role like a pro. Casting him as a man in love with the sound of his own voice is almost self-defeating, but Pacino isn’t coasting, either he’s blunt and funny, playing into the makeup and the rug, sneaking a little pathos into Hoffa’s endless litany of peeves and grudges and finding real tenderness in his brief moments with Gallina and Paquin.

We miss him when he’s gone, and I think Frank does, too. Shame about that.