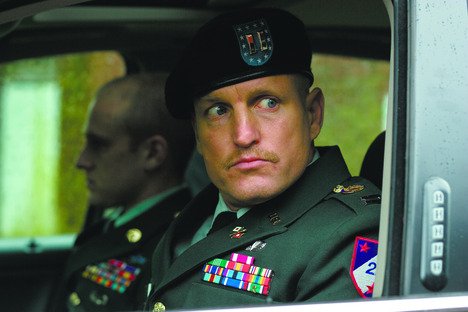 François Truffaut once said there was no such thing as an anti-war movie, since all war movies make war cinematic and therefore exciting. Half a century later, Oren Moverman’s The Messenger proves him wrong.[rssbreak]

Set entirely in the United States, The Messenger is the story of Will Montgomery (Ben Foster), a soldier just returned from Iraq. Wounded in action but deemed fit to serve, he’s assigned to spend his last three months of duty as a Casualty Notification Officer. It’s his job to knock on doors and tell spouses and parents that their loved one wasn’t as lucky as he was.

Screenwriter Moverman’s (Married Life, I’m Not There) directorial debut is intensely focused. Will tries to piece himself back together, enduring bonding sessions with his blustering captain (Woody Harrelson) but feeling drawn to a recently widowed woman (Samantha Morton). He recognizes the devastation behind her eyes.

The Messenger is about the human wreckage of war, and the weight of survival. And Foster, who’s built a resumé on twitchy characters – he was Russell Crowe’s henchman in 3:10 To Yuma and an amnesiac astronaut in Pandorum – surprises with a performance defined by stillness and repression. Harrelson was Oscar-nominated for the showier role, but Foster is the revelation.