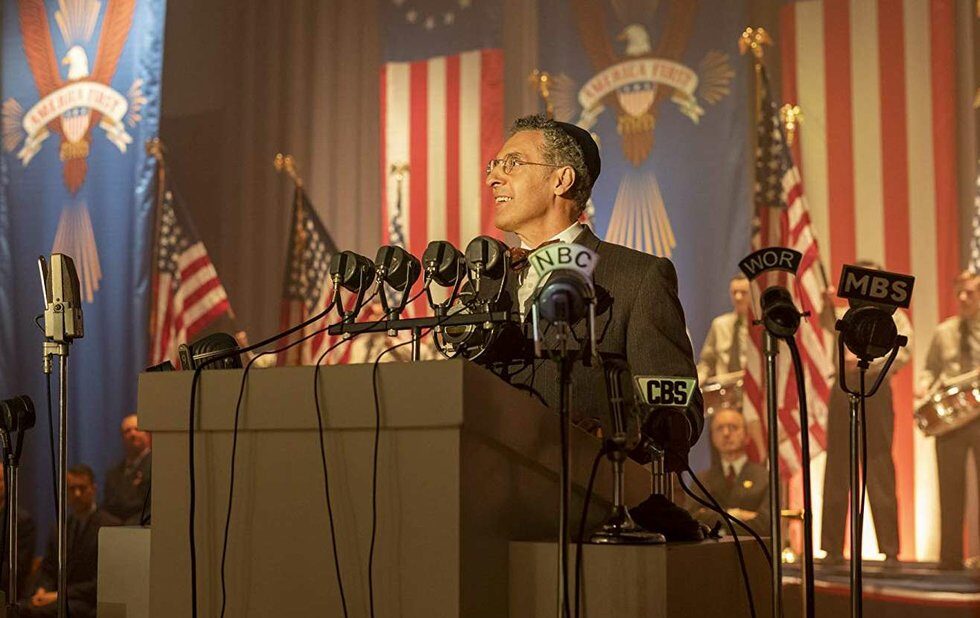 THE PLOT AGAINST AMERICA (David Simon). Premieres Monday (March 16) at 9 pm on HBO Canada and streaming on Crave+. Rating: NNNN

Alternate histories are tricky things. Quentin Tarantino’s Inglourious Basterds and Once Upon A Time… In Hollywood both spend a couple of hours establishing a certain level of historical veracity before veering into directorial wish fulfillment by rewriting the history in which they’re set. And then there’s the weird stylistic mashup of Amazon’s recent Hunters, with its Tarantino-inspired take on a band of Nazi hunters stalking sneering Fourth Reich wannabes in 1977 New York, while flashing back to grim and brutal scenes of the actual, factual Holocaust. (It’s a tonal disconnect the show never really resolves.)

If these projects have one thing in common, it’s that they enable a weird sort of retro play-acting – Amazon’s The Man In The High Castle, with its digitally realized Riefenstahl vistas and elaborately tailored wardrobes, is constantly reminding us that its alternate America is just a thought experiment, a what-if exercise. None of it is real. We always have an out.

The Plot Against America, which premieres Monday (March 16) on HBO Canada and Crave, isn’t interested in that. David Simon and Ed Burns’s six-part adaptation of Phillip Roth’s 2004 novel is as real as possible, both in its 1940s New Jersey setting and its emotional stakes. The actors aren’t winking. It all feels painfully plausible.

As in Roth’s novel, the story unfolds in a timeline where Charles Lindbergh runs for president in 1940 on an isolationist platform, promising to keep America out of the war in Europe. He defeats Franklin Delano Roosevelt, signs a non-aggression pact with Nazi Germany – and in so doing, starts America on its own path to fascism.

The miniseries is told from the perspective of the Levins, a middle-class Jewish family in Newark who serve as the metaphorical frogs in boiling water: things get just a little bit worse in each episode and we hope they’ll jump out while they can. And yes, I know that’s not a real thing frogs are a lot smarter than humans. They get themselves out of the pan. The Levins stay put and try to make sense of things. It doesn’t go well.

If Roth’s book was a metaphor for the George W. Bush years, Simon and co-executive producer Ed Burns (Generation Kill) have very consciously retooled it for the age of Trump and his sales pitch of making America great again by taking it back to an idealized past. Because this is the past Trump speaks of – one where assimilation only goes so far, where minorities keep to themselves out of apprehension and comfort, and where democracy and liberty are just words to be thrown around by autocrats at rallies.

Morgan Spector and Zoe Kazan are well-matched as Herman and Elizabeth Levin, his righteous anger at the erosion of his country’s principles balanced by her shock and disbelief at the changing nation, and her growing resolve to protect her own family. (They also look like they belong in the early 40s, which is not always something period shows get right.)

Anthony Boyle plays Herman’s hotheaded nephew Alvin, who ignores Lindbergh and joins the fight in Europe Winona Ryder is Elizabeth’s sister Evelyn, who falls into the orbit of a vainglorious Southern rabbi (John Turturro) who’s convinced that Lindbergh’s anti-Semitism is just a gimmick. And this is where the show stumbles Turturro does his best as a genteel fool who loves the sound of his own voice almost as much as the social status that comes with serving powerful friends – but the performance belongs in a different show it’s just a little too big, and a little too arch, to fit the tone of gathering, deliberate dread Simon and Burns establish here.

And it distracts from the heart of the series, which is the Levin kids: angry Sandy (newcomer Caleb Malis) and fretful Phillip (Marriage Story’s Azhy Robertson), who have to interpret the changes in their world through their parents’ responses. Both kids are rock-solid at conveying the shifting tensions, and while there’s not much of an effort to track their growth over several years of the story, series directors Minkie Spiro and Thomas Schlamme make sure we see them develop emotionally from one episode to the next.

These boys are the future of America, after all – assuming they still get to be part of it.