We caught up with the Toronto rapper to talk about the city's energy during the NBA Finals, working with his cousin Steph Curry and his upcoming EP Sun Of Dawn 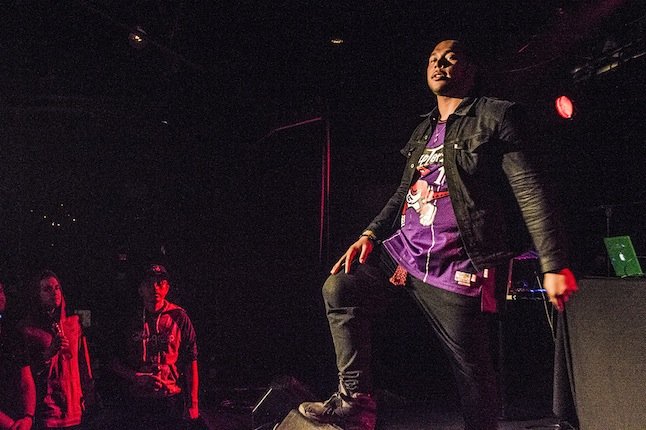 When I call Devontée on Thursday, May 30, he’s walking his dog and gearing up to attend the first game of the NBA Finals, which are taking place in Canada for the first time as the Toronto Raptors play the Golden State Warriors.

“I’m lucky, my cousin got me some tickets,” he says.

The cousin the Toronto rapper mentions so nonchalantly is Steph Curry, the Warriors’ star point guard and one of the most revolutionary basketball players of the last decade. They’re related through Steph’s wife Ayesha Curry, who grew up in Markham, Ontario.

For all of Drake’s headline-stealing shenanigans sitting courtside at every Raptors game, in a way Devontée is the true bridge between the two teams currently playing for the championship. “I’m blessed,” he says. “I’ve been praying for this [matchup] since the beginning of the season.”

You wouldn’t necessarily know it to listen to his 2018 album, Head Gone, which is layered with local slang and mixed with the multicultural influences of his Jamaican-Canadian Toronto upbringing, but the Golden State Warriors are a big part of his career so far. The album was even mixed at the home studio of another Warriors star, Kevin Durant.

But Toronto is heavily encoded in Devontée’s musical DNA. He came up with the phrase “WOE,” which Drake borrowed for the “running through the 6 with my woes” hook of Know Yourself (which you’ll hear often at Raptors games), but for him it’s the name of his brand, his crew and his motto: “working on excellence.” As part of a collaboration with Under Armour, you’ll see it on a black and white edition of Steph’s Curry 6 shoes, and he’s also cooking up a community project with University of Toronto women’s basketball. And he’s involved in the youth mentorship program School Alliance of Student Songwriters, which is how his new music ended up with guitar by Dale Russell, formerly of the Guess Who.

On June 21, Devontée will release the five-song Sun Of Dawn EP, a more spiritual and uplifting sequel to the banger-filled Head Gone. Talking to him about it, it’s hard not to keep coming back to the Raptors. But it’s all related when it comes to civic pride, and whether you’re talking basketball of music, Devontée says, we’re on an upward wave.

For all the talk of Drake on all the sports shows right now, when it comes to the Finals it seems like you’re just as relevant.

Oh, that’s an honour. But I gotta get as relevant [to the point where] where I have my own courtside seat, you know?

Sitting in the Curry seats, does it matter you’re cheering for the Raptors?

Umm… I don’t think so. They know I’m a Toronto heavy repper. They know that I want Stephen to be successful, but at the end of the day how could you be from Toronto and not want Toronto to win?

The energy in the city is incredible right now. It’s hard not to get sucked into it.

You know what I’m saying? It’s ridiculous. It’s like one of the most amazing feelings I’ve ever felt. I feel like I can’t lose. Speaking for the city, I feel like we can’t lose. Like anything we want to put our minds to as a city right now, the energy is just in our favour.

Despite all those connections to the Warriors, your music feels like it could only have come from Toronto. Is that something you’re aiming at in your music?

That’s my goal, for sure. And what you just said is a compliment, because Toronto is one of the best feeling cities in the world. Toronto is a place that feels like every different ethnicity and race and gender know how to co-exist together and also learn from each other’s cultures and adapt and grow together. And I think that is what separates us from anywhere.

Your upcoming EP Sun Of Dawn has a different vibe from Head Gone. Musically, it’s moodier and more organic sounding, but it’s also more optimistic and spiritual, lyrically. Is it sort of a reaction?

Honestly, I’ve been working on this project for like three years. I’ve always had this concept, Sun Of Dawn. My mother, her name is actually Dawn, so I am literally the son of Dawn. And metaphorically, the sun of dawn is the first light of the day. It’s kind of a trilogy. Head Gone is based off my thoughts, like the negative, the evils, the lust, the fears, pride. And Sun Of Dawn is the answer to that. It’s the light right after that darkness.

It’s only 20 minutes long. I call it like a quick meditation. I just want people to listen to it and cleanse their palate or for it to uplift them and inspire them to be better, help them get through that Head Gone-ness. As a human, we have both. We have good thoughts and we have evil thoughts, and that’s the balance in what makes us.

Your first single is Shift (coming out June 10), and it alludes to a sort of global change in energy. Is that something you’ve observed?

You know on a heart graph in a hospital when your heart is hooked up to that machine and there are spikes, up and down? In general, I feel like the masses of people are at the bottom of that spike. A lot of people are just getting out of depression and this negative energy that the world is feeling. There’s a big shift, you can feel it.

You called it a trilogy earlier. What’s the third part?

The third is yet to come. It’s going to be a mix of both emotions, more present – accepting the Head Gone and accepting the light and just living within the moment.

As a Torontonian, pridefully, our energy right now is like no one can talk to us. Doesn’t matter who you are, where you are, what you are, I’m from Toronto and I’m proud. I’m prouder than ever.

How did you end up mixing Head Gone at Kevin Durant’s house?

I had a song with Kevin Durant and my friend Myck Kabongo, who’s a basketball player [for Raptors 905] already. Myck went to University of Texas, so he had a relationship with [Durant]. I didn’t know him at the time, I didn’t meet him. We only spoke over the internet.

My cousin Ayesha has a restaurant in San Francisco called International Smoke. I went to the opening of that restaurant, and Stephen brought his teammates after the game. I was talking to Kevin – he makes music too, he produces and raps. Next thing you know he invited me over to his house, and he has a big studio there. That’s where I met Raleigh, who mixed and mastered Head Gone and Sun Of Dawn. I recorded and produced the first single off Head Gone, Bless, at [Durant]’s house and mixed the rest [of the album] there. It’s crazy to think, without Kevin Durant I wouldn’t have the single or the project.

You really are the bridge between the two teams in this series.

I feel like The Bridge should be one of my nicknames. Even my music, that is the bridge of everything – the dark to the light, the heavy raps to the melodic, bringing people to the old school, like having Kardinal Offishall [who played at Game 1] on it. I just feel like I am essentially the bridge of that, bringing the past and the future together.

After Drake and the Weeknd got huge, there was a lot of talk about the Toronto Sound, and now it feels like the stuff breaking out of the city is a lot more diverse in sound. Do you think Toronto is in its next wave?

It’s our time. I feel like we always say that, but it’s more so. We’re producing amazing things, better and better each time. From Kardinal to Justin Bieber to Drake to the Weeknd to NAV to Haviah Mighty to everybody, Devontée. Athletes, businesses – everything. And then if the Raptors take this [NBA championship], no one can make fun of us anymore.

As a Torontonian, pridefully, our energy right now is like no one can talk to us. Doesn’t matter who you are, where you are, what you are, I’m from Toronto and I’m proud. I’m prouder than ever.