Interview: Jeremy Dutcher wants his songs to soar beyond the record 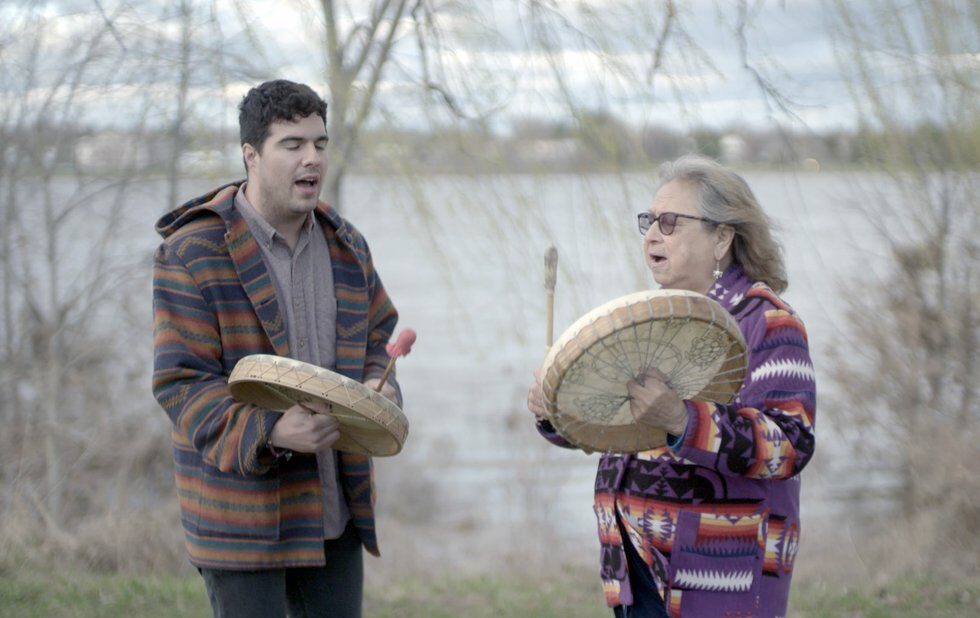 Jeremy Dutcher (left) and elder Maggie Paul sing to the Wolastoq river the namesake of his language and album on CBCs In The Making.

Jeremy Dutcher (left) and elder Maggie Paul sing to the Wolastoq river the namesake of his language and album on CBCs In The Making.

Who says music has to end when it’s recorded and released? For Jeremy Dutcher, that’s just one step on a journey that is still ongoing.

The Toronto-based singer/songwriter was relatively unknown when he released his debut album, Wolastoqiyik Lintuwakonawa, in 2018. He’s since earned a Juno for Indigenous album of the year, won the 2018 Polaris Prize, made headlines for his powerful speeches, played an NPR Tiny Desk Concert and toured nonstop. Somewhere between he’s found time to collaborate with Yo-Yo Ma and play Joni Mitchell’s birthday party.

Soon he’ll embark on an orchestral tour where he’ll play with the symphonies of cities throughout Canada. As he brings the project to more and more people, he’s let the songs soar beyond the record.

“A song is what?” Dutcher asks over coffee and juice at 401 Richmond, looking considerably more casual than the previous night’s Polaris Prize gala where he presented the award to his friend Haviah Mighty with a bear hug. “Is a song something you put on a record? Is it an idea? A melody? Is it an orchestra? I think the answer is that it’s all of them.”

To create Wolastoqiyik Lintuwakonawa, Dutcher spent years digging up wax cylinders of traditional songs from the Tobique First Nation in northwest New Brunswick, where he was born and raised, in the Canadian Museum of History archives. He transcribed them by ear and built arrangements that meld his breathtaking operatic voice with the voices of his ancestors. It’s intensely personal and it was intense to make.

So now that it’s out, Dutcher is doing it as much justice as he possibly can. He’s carefully considering every part of the project beyond the record, from his incisive awards speeches speaking out on Maxime Bernier and foreign policy, to his first music video for Mehcinut celebrating Indigenous Excellence, to the majestic capes he performs in.

Considering the idiosyncrasies of the record – its mix of modern classical, jazz, musical theatre and indie pop, its ethnomusicological background, the fact that it’s sung in a language that fewer than 100 people still speak – Dutcher is surprised the record is resonating the way it has been for the last year and a half.

Touring across the country, he’s met people from other Indigenous nations who don’t know his specific ceremonies or traditions but understand the precariousness of languages and the importance of cultural preservation and feel the music deeply. He’s toured in the United States, where the conversation around Native American issues is different, and in Europe, where he says he’s been asked if he lives in a teepee and where his long hair is. But despite the emotional labour of “having Indigenous 101 conversations” when he just wants to be a musician, the songs have been connecting with people everywhere he goes.

But one thing that’s often missing, Dutcher says, is context. Though he does his best onstage to explain the stories behind his songs and why they mean so much, he worries that the spotlight is pointed in the wrong direction.

“There’s a phrase in my language: psiw-te npomawsuwinuwok, kiluwaw yut,” he says. “All my people, this is for you. And what that means is this isn’t about me, it’s about my community.”

So when CBC asked to profile him for the process-driven documentary arts TV series In The Making, he agreed – under one condition.

“I wanted to really ensure that we weren’t telling the story of Jeremy Dutcher.”

Host Sean O’Neill and his team met him in his childhood home in rural New Brunswick, where the music means the most. They talk with his proud parents in his kitchen while his mother – who was once punished by her teachers for speaking the language her son now sings in – cooks for them. They listen to once-banned Wolastoqey songs with Maggie Paul, Dutcher’s elder, at the University of New Brunswick – the person who first encouraged him to seek out the wax cylinders and reintroduce the songs to the people. And, most powerfully, they film Dutcher and Paul singing to the Wolostoq river – the “beautiful and bountiful river” that gives the album, and his language, their name. (You can watch the whole episode here).

It’s all part of, what Dutcher calls, a “radical reorientation” away from music as individualism and back toward what it is for him and his community: “Collectivity, togetherness. A shared experience.” It’s about amplifying voices that have been silenced due to colonization and cultural genocide.

“These people have been living their lives with these immense gifts and cultural understandings,” he says, “that we as a society have no idea about because we haven’t been fucking listening.”

In his acceptance speech for the 2018 Polaris Prize, Dutcher declared that Canada is “in the midst of an Indigenous renaissance.” The phrase gave a name to the fact that some of the most vital voices in Canadian music, art and literature are currently Indigenous, but also rankled some for suggesting this was a new thing.

“A lot of journalists talked about me breathing it into existence. That’s bullshit,” he says now. “No, no, no, no, no. It’s been happening. For a long time.”

It’s important to uncover the wisdom that’s been suppressed, he says, but also for Canadians to understand the mind of conquest, the logic that made people think it was okay to come to a continent, dominate an entire race of people, take everything out of the land and profit from it. He says Indigenous and non-Indigenous people have to come together because “the world is on fire” and the thinking that got us into this mess won’t get us out of it.

“There’s no other option than to figure it out,” he says. “So let’s take what you have to say and what we’ve been saying all along, and” – he claps his hands together and reaches them forward – “let’s figure out a pathway together.”