"Folk has always been a fantastic medium for delivering social comment and protest," said John Mann in this interview. "What's drawn us to the folk scene is its basic lack of pretension." 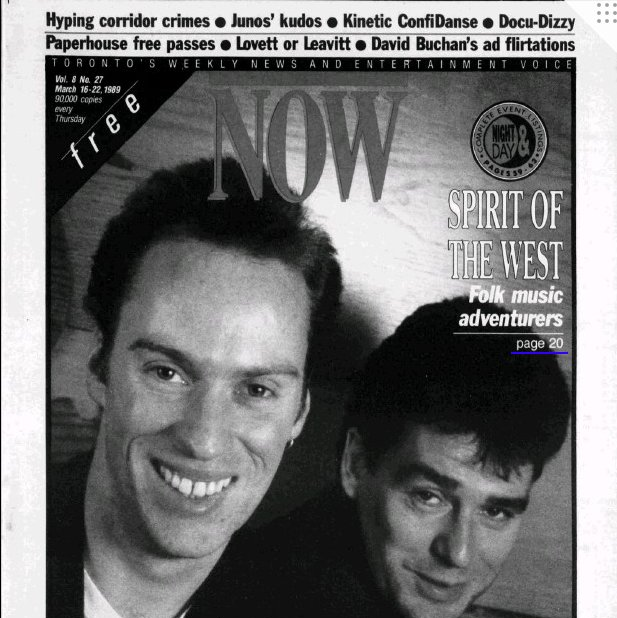 Spirit of the West's John Mann (left) and Geoffrey Kelly on the cover of NOW Magazine, March 16, 1989

John Mann, lead singer of the quintessential CanRock band Spirit of the West, has died at the age of 57, after living (and touring, briefly) with early-onset Alzheimer’s.

When NOW put the band on the cover in 1989, they hadn’t yet conquered every Canadian college bar’s party playlist, but they were already working their way towards the perfect mix of politically conscious Celtic-tinged folk-rock and unpretentious arm-in-arm drinking songs. They’d make their major-label debut the following year and release the indelible anthem Home For A Rest.

WATERLOO – The sound man calls Spirit of the West a “sweat band” because of their energetic but decidedly no-frills live approach. And just minutes into their first set Saturday night at the Bombshelter – a University of Waterloo campus pub – it’s obvious the technician knows what he’s talking about.

By the second song, band cofounder John Mann has broken two guitar strings exercising his wrenching, emotive singing in front of an audience of 350. The folk-rock tag seems a little bald for this Vancouver-based outfit, yet that’s exactly what Spirit of the West is – one of the freshest, most lyrically charged bands to emerge from the Canadian folk scene this decade.

But if the band’s formative past is tied to the folk festival circuit, its future lies increasingly in the bars and clubs frequented by an audience weaned on the vital sounds of college radio. The Spirit’s current national tour takes in venues ranging from 20O-seat folk clubs to 800-capacity, standing-room-only bars like Toronto’s Diamond Club, where the group celebrates St. Patrick’s Day tomorrow (Friday).

“The folk realm can be a very dead end,” says Mann before the Waterloo show, “because it’s not like the shows get bigger and bigger. They reach a plateau and stay there, and it can be comfortable or it can be inhibiting – we want to stretch out a bit.”

And that’s what Mann and cofounder Geoffrey Kelly are doing as they expand the group from a trio to a quartet and beyond. Former bassist Hugh McMillan split amiably with the pair last December to pursue solo interests, and the leaders have since added two new members, bassist/singer Linda McRae and multi-instrumentalist Daniel Lapp. And although each incarnation of the group has been drummerless, the latest four-piece edition recently cut a three-song demo in Vancouver bolstered by Darrell Mayes, time-keeper for the Colin James Band.

This move from folkie minimalism to a bolder, more commercial sound is particularly evident in the Spirit’s evolution as a recording act. The band’s self-titled debut album appeared independently in 1984 and established the group’s roots in celtic-flavoured, acoustic ballads. 1986’s Tripping Up The Stairs (on Stony Plains records) was more diverse, with upbeat jigs and pointed lyrics about issues like native land claims and the tyranny of false hope inflicted on the working poor by state lotteries.

Neither record, however, contained anything as close to pop as Political, the single and video from Labour Day, the Spirit’s third and most recent LP. The song is a lively and lovely exchange about a relationship that hits a wall when ideology clashes with emotional intent.

Yet in spite of Labour Day’s meIodic hooks and stinging lyrics, the Spirit on record still can’t compare with the Spirit live. Most of the students at the head of the line outside the Bombshelter know this from experience, having seen the band before in Toronto, London or Guelph. The fans start queuing for the 10 pm show before six, and by the time the doors open at eight the line stretching around the large common area is long enough to sell out the room.

But what prompts this young crowd, many of whom aren’t yet 20, to line up for a Celtic folk band?

Inside, as the Spirit hits full steam and the reels start rolling, artificial notions of hip and cool evaporate in a wash of bracing playing and good-humoured abandon.

When Mann’s aggressive strumming gets too rough he asks if “anyone out there plays guitar and would mind changing a couple of broken strings for me?” His request is granted nonchalantly, as if such direct connections between performer and audience happen every day. It’s this mix of casual informality and buoyant musicality that puts the spirit in Spirit of the West. 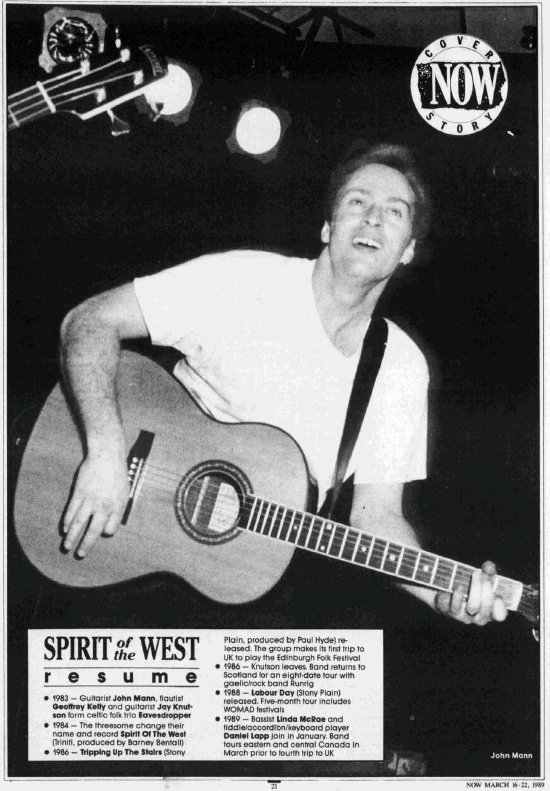 “I think what’s so exciting about today’s folk music.” says Mann, earlier that evening in the band’s cafeteria-cum-dressing room, “is that it has such an urban feel to it. People like Billy Bragg and Michelle Shocked, they’re writing about things that concern the people who populate our cities, and that shifting of lyrical focus to urban issues has made it way more accessible right across the board.

“I think it’s wonderful to see someone like John Cougar Mellencamp make an album with dulcimers on it, and I think he used them to great effect on Lonesome Jubilee. It’s part of an acknowledgement by rock musicians that this very real, rootsy stuff that’s been around for such a long time hasn’t gone anywhere and isn’t about to go away now. At the moment, folk is really flourishing.

“We’re quite aware of the socalled folk revival,” adds cofounder Kelly, who also sings and plays flute, tin whistle and bodhran (an Irish hand-held drum that resembles a large tambourine), “and we want to play a bigger and bigger role in that revival because, for one thing, we’ve been at this for five or six years now – it’s not like we’ve just jumped on the bandwagon or anything.”

Spirit of the West paid its dues with several national tours and slots in dozens of folk festivals from Yellowknife to Halifax. And this summer the band embarks on its fourth tour of the U.K.

“We’ve built it up slowly with a real grassroots approach,” confirms Mann. “We’ve never had a lot of commercial radio air play, so the crowds we do draw across Canada are the result of all this endless touring. And I think it’s been very positive, because when you do it that way – through sheer tenacity – there’s no danger of suddenly having the bottom fall out. If our next album, for instance, stiffs commercially, I don’t think it would affect our draw at all, because of the nature of our following, which is, as I say, a real grassroots one.”

But loyalty to that following has, in some ways, impaired the group’s progress and kept it from reaching an even wider audience. Kelly speaks of the natural progression toward a full-band sound but acknowledges that “the ultimate reason we’ve avoided drums up until now is because we’re very aware and concerned about what our fans might think if we altered the sound of the group that much.

“By the same token, though, one of our goals is to get a major label deal, and naturally record labels and marketing people want to hear drums. We used a drummer on the last demo and we’re talking about adding a full-time percussion player in the future. But right now, this group is still too new. I mean Linda and Daniel only joined at the end of January, so we’ll wait a while and let the dust settle a bit.

“Most of the music we play is very rounded,” adds Mann, “it kind of gallops, and I think that if you add drums to that it slows it down, makes it more square.”

In concert, the lack of a backbeat goes all but unnoticed. Mann’s rhythmic attack and McRae’s supple bass playing provide ample dance direction, while Lapp’s staccato fiddle bursts, wheezing accordion runs and trumpet exclamations add all the melodic glue necessary. The group’s four-part harmony is chillingly beautiful yet rarely precious. Kelly does a marvellous routine with hand gestures and voice, where he mimics a host of Latin percussion instruments with incredible accuracy – the act sends a wave of smiles through the house with its Fat Boys silliness.

“We want to make sure the next album is more like our live show, where we really break things up,” says Mann. “We’ve realized that you can’t just beat people over the head with one issue after another, because eventually they just all melt together and you lose the impact. You may really want to make a point about the treatment of the mentally handicapped but because the last three songs have been about other equally heavy things you end up running into overkill. We’ve gotten into humour more and more, especially with the new songs.

“I think we’ve grown more adventurous in our writing. We get a big kick out of some of the British bands like Morrissey and the Smiths and some of the quirky lyrical ideas they come up with. They make you laugh, but they also make you think.”

Yet in spite of these implied new directions, Mann and Kelly insist that the changes are aimed only at providing a more balanced perspective – moral and political issues, they say, will continue to dominate their attention.

“I don’t think playing to a larger audience represents any real threat to our ideals,” says Mann, “because, more and more, rock and pop are embracing politics.

“Folk has always been a fantastic medium for delivering social comment and protest — folk musicians have never had a problem with naming names, and I really admire that. I think in some ways what’s drawn us to the folk scene in the first place is its basic lack of pretension.”