Now in its 23rd year, NXNE looks different than it used to. With the e-sports-focused Game Land (June 16-18), speakers’ series Future Land, musician-and-broadcaster-curated Club Land shows at a handful of venues, and an expanded weekend at Port Lands on Commissioners Street replete with midway rides, there were highs and there were lows.

Evan James Redsky evoked city streets and wild prairies, and Twin Within got goofy (Tuesday, June 20 at the Rivoli)

Nick Rose of Dwayne Gretzky and Teen Ravine curated Tuesday’s Rivoli show, dubbing it a “sensual night of soft-rock,” and the sombre folk-rock of Toronto’s Evan James Redsky was the highlight. Pairing 90s grunge vocals with an acoustic guitar, he delivered songs that were visceral and at times surprisingly tender, evoking harsh city streets and desolate prairies.

Just before, local mustachioed duo Twin Within warmed up the crowd with lines like, “Let’s make some love – music love” before kicking into songs from their 2015 album, Horizontal Lines. Between teasing the crowd and each other with cheeky banter, they showcased beautiful harmonies and strong songs like Tunnel To The Reservoir and YerYard ’78 (reminiscent of the Pet Shop Boys’ Being Boring).

Making damn good blues rock, Philadelphia’s Son Little (nee Aaron Livingston) made his 45-minute set feel like an epic concert. A stellar band accompanied his rich, gravelly voice, with its Marleyish inflections, drawing concertgoers toward the stage. Standout tracks Doctor’s In, Lay Down and Your Love Will Blow Me Away When My Heart Aches stunned during a dud-free set. He’s a must-see next time he makes his way through Toronto.

Over the moon for Muna (Saturday, June 24, Canal stage)

Before Muna (Katie Gavin, Josette Maskin and Naomi McPherson) even hit the stage, rows of fans took position upfront. This past February the L.A. act impressed at their Family Day show at the Drake Hotel, and singer Gavin, flying around in a canary yellow hoodie, made it clear that the party was back. Exuding star power, her dark-pop vocals enthralled, while radio-ready Crying On The Bathroom Floor may make Muna the next big thing. They also shut down a group of drunk men disruptively yelling “Fuck yeah” by diving into the song Loser. Whether intentional or not, it was a perfect moment in a dynamic set. 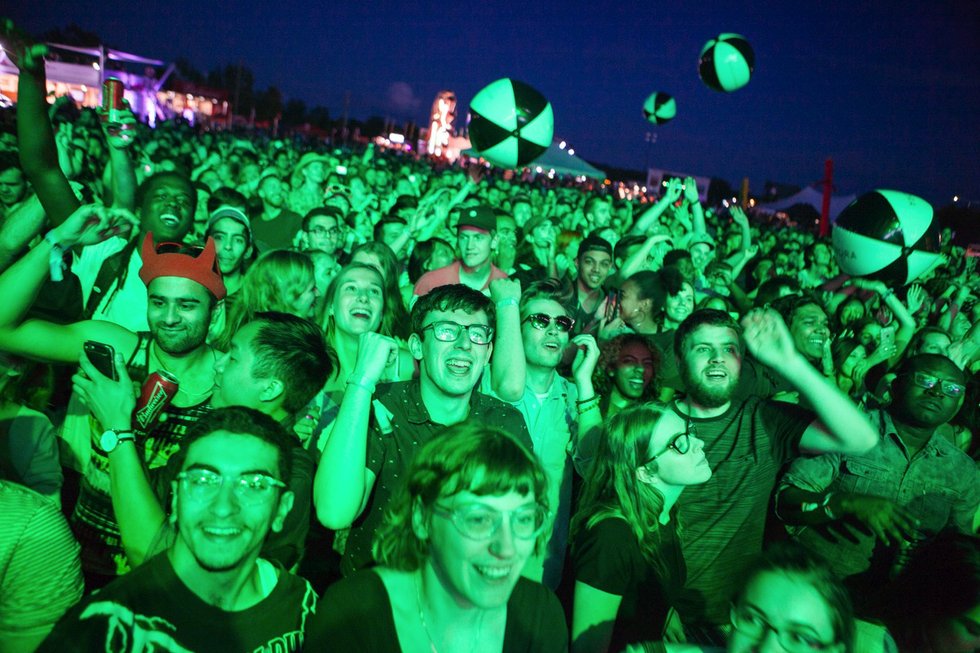 The Montreal DJ/producer brought much-needed star power to the fest, closing out Saturday night at Port Lands. The crowd swelled noticeably an hour before he came on, and greeted him with loud cheers. The show felt closest to the outdoor party vibe that NXNE is trying to achieve with its Port Lands set-up: Sephora beach balls bounced and glow sticks shone as he dove into tracks from his 2016 Polaris Prize-winning album, 99.9%.

He’s as dynamic a performer as he is a producer: mean muggin’, dancing and playing with the crowd, bringing swag to the Skyline stage, which needed an injection of bigness and glamour. The audience responded best when he drew from his own catalogue, and he DJ-ed as if he could play all night. His 75-minute set showcased his ability to sustain intensity, keeping the crowd hyped the entire time.

That old adage about performing like you’re playing to a packed house even if it’s a crowd of one? That’s what 17-year-old Ebhoni did. With a 2 pm set time and few folks in attendance, she still brought it. Flanked by backup dancers and a DJ, the platinum blonde experimental R&B artist shimmied, bounced, engaged the crowd, sang one infectious track after another and even squeezed in an outfit change.

Delayed show times, often pushed back by an hour or more, became all too familiar and frustrating at some of the Club Land events. And while the curator’s series idea was inspired, having them there to hype the crowd and introduce the bands made a big difference. Nick Rose being on hand to support the artists he’d selected made the night feel more special than, say, Shad’s (who curated the Baby G on Wednesday but was a no-show).

NXNE used to be one of the most exciting festivals of summer, but its recent move to Port Lands undermines what it once was: a fun, club-hopping, dynamic experience where you could catch big names and easily make new discoveries.

The large, isolated space felt empty much of the time, aside from some of the headlining evening sets. Its roped-off VIP section, complete with scant seating, did little to provide an exclusive feel, and was easily breached by fans during the Kaytranada set. It’s far from the city’s core and transit is infrequent, making it hard to slip away between acts you aren’t interested in.

During a weekend that included Pride, the kickoff to the Toronto Jazz Fest, Luminato and myriad other events, many music fans stayed away or seemed to show up only for acts they were interested in. Port Lands, it seems, deterred fans from investing in the full weekend experience.