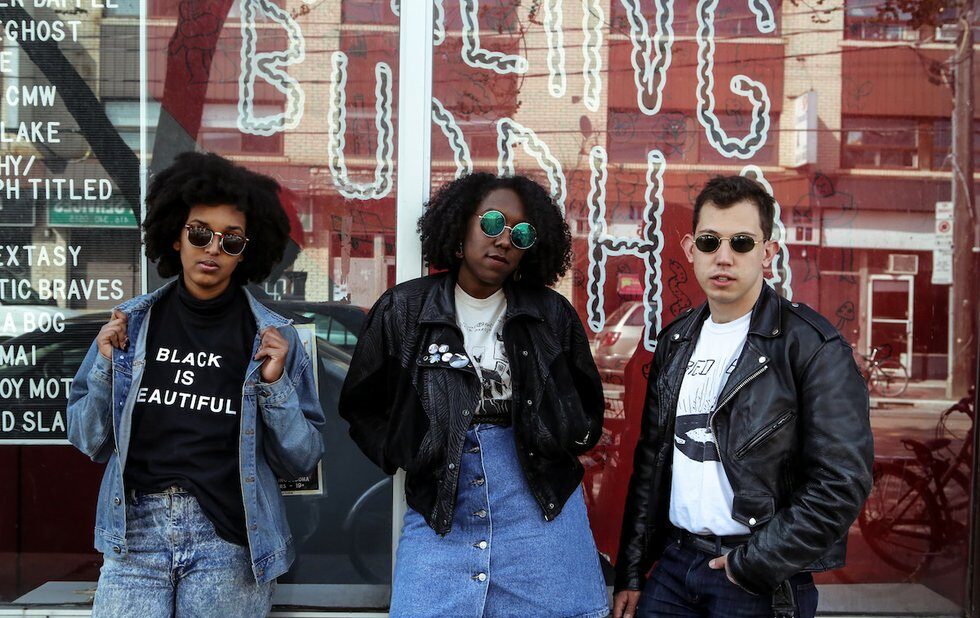 It's Cold Outside organizers Hana Jama

Amidst the recent closings of several small music venues, there are signs that Torontos already disparate music communities are retreating into themselves.

While the premium on available venues goes up, indie artists are seeing that the diversity of their respective scenes, both in terms of people and sound, is suffering. Lack of racial representation is a pervasive issue on concert bills, and the closing of venues has seemed to magnify it.

But two music festivals happening this weekend are fighting back by booking diverse lineups that reach across communities, genres and social scenes.

Kyle Knapp of the band Deliluh and the label Raw Materials planned the SHHHH music fest to address the lack of diversity hes seen on other festival bills, and he set it in an unconventional space: the Parkdale Library.

His aim is to take advantage of that welcoming space to make the music more accessible than in bars, clubs or basements.

Though he doesnt think its the perfect solution, he sees the basement auditorium in the Parkdale branch as a neutral space not aligned with any scene or sound, and a site where the musicians can be the focal point.

I saw Deenzi play at the Tranzac and was just floored. They immediately struck me as a band that would be very appealing to friends who might not frequent that place, says Knapp. Thats how these bills come together by seeing someone whos outside your periphery.

This is the second consecutive year for SHHHH, which helped launch the Parkdale branchs instrument lending library last year. The experimental acts set to play this year include Kat Estacio (of Pantayo), Carl Didur, Bodies that Matter, Deenzi and a host of others. The two-day festival also aims to be accessible in another way: both shows take place in the early afternoon and evening.

Alican Koc, long-time local punk and vocalist in the Brain, also saw an opportunity to address the fragmentation of T.O.s music scenes with his own festival, Its Cold Outside.

The three-day fest features Tenement, Tapehead and Quitter, as well as locals Fur Coat, Tashme, Siyahkal and Chlorine. How to achieve a diverse bill was a constant point of discussion between him and his friend music journalist Melissa Vincent.

Alican and I had been discussing how to include different groups and organizations to try open up the spaces were using for the festival, Vincent recalls.

The remaining DIY spaces have become extremely protective of their own boundaries, and they only book shows for bands that fall within a very specific social circle, with those spaces becoming their own kind of clubhouse, Koc adds.

He and Vincent say a pervasive clubhouse mentality often prevents Black and POC punks from being booked and participating in the scene.

Everyone has friends in different scenes, and its just bizarre that theres not an honest mixing of people between those scenes, says Vincent. For a city that wants to champion both its diversity and its music, I dont think theres been enough work done to build those connections.

She reached out to Hana Jama of the Ottawa-based collective Babely Shades, who returned to Toronto last fall. The result what Jama calls a true collaboration between the three is an after-party on the fests final night that prioritizes the booking of artists from marginalized communities. Baltimore darkwave rapper JJ Fonlon headlines, with locals Babylawn and Myst supporting.

Koc says it was important for the organizers to use their social capital within the DIY community to lead by example, promoting artists we think are relevant but fly under the hype radar of the most exposed bands.

Jama agrees, adding that its important to book people who have the skills and deserve a crowd but may not always get the opportunity.

Why wouldnt people want to see a bunch of great rap acts at this hardcore fest? Vincent asks. I really think if more organizers of shows were able to get past this idea that people are only open to seeing one genre of music or one particular kind of artist, the scene as a whole would be a lot more open.