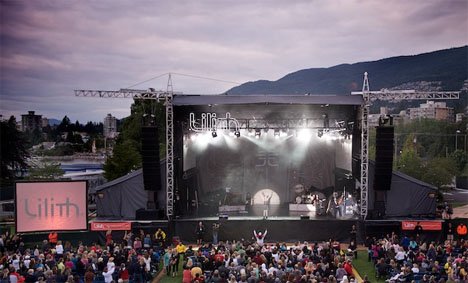 Terry McBride is under the impression the media is killing Lilith Fair, and in some ways he’s not totally off base.

The Lilith Fair co-founder did a damage control interview with EW last week immediately after issuing a national press release stating that the beleaguered tour was forced to cancel 10 more dates, including a stop in Montreal.

McBride plays defensive throughout the Q&A, emphasizing slumping economic conditions that he believes are creating “one of the most challenging summer concert seasons.” But he also repeatedly blasts the media for negative coverage and journalists who were pre-maturely claiming shows to be cancelled when in fact, according to him, they weren’t.

“I have been amazed at the feeding frenzy of negativity by the media and bloggers around Lilith Fair,” McBride blogged on June 29.

Though it mostly sounds like sour grapes, the Nettwerk Records chief probably has a legitimate beef when it comes to the media giving this tour a bad buzz, and perhaps contributing partially to its already anemic ticket sales.

Ever since tour co-founder and headlining star Sarah McLachlan admitted to soft sales and ticket price complaints, Lilith has been on death watch in the media.

Unfortunately for McLachlan and McBride somebody had to be the public fall guy this summer for an industry that doesn’t want to acknowledge it’s in turmoil. Tour stops are being dropped left and right this summer, with the Jonas Brothers (though sadly, Toronto demand forced a second show for these teen idol wash-ups), Christina Aguilera and even stalwart money vacuums the Eagles are struggling to gouge fans for another round.

It’s being called the Tour Crunch of 2010, and for some reason promoters are baffled by it. But is it really so complicated? Even someone with a half a functioning brain, Ozzy Osbourne, seems to understand it’s mostly about the inflated ticket prices that artists and promoters are commanding. “People are getting very greedy,” he said.

Even this web columnist took Lilith to task a month back for jumping on the disturbing trend of structuring ticket prices to create a stratified society of fans, with VIP packages and premium seating available only to those with big money to drop.

So when McBride blogs – “What drives the passion to write negative and speculative commentary on what is a socially positive and giving festival?” The answer would be because the tour industry system is a broken model and it’s becoming obvious fans are tired of it.

So maybe Lilith didn’t get the glowing coverage McBride would have liked, and maybe that’s contributed to the dark cloud hanging over it, but there’s a big picture problem here and the Lilith Fair tour just happens to currently be at the foreground of it.

Lilith’s Toronto date is still on for July 24 at the Molson Amphitheatre.