Music Men Ruined For Me collects stories of musical mansplaining

There are myriad ways that women-identifying and non-binary folk are regularly made to feel that they don’t belong in music scenes. Just ask, and you’re likely to hear a story of how a man assumed a woman’s musical knowledge of a band was limited because of their gender. Toronto-based writer and editor Alison Lang did ask, and she received submissions from writers based locally and all over the world for a new zine called Music Men Ruined For Me.

The nearly 30 entries range in style and subject matter. There’s a playful definition of mansplaining in action, an artful comic about entire families underestimating a woman’s fandom, a heartbreaking account of a father’s overbearing jazz enthusiasm flattening his daughter’s own desire to explore the genre, a thrilling punk call to arms and much more. Music ruined includes usual suspects like Nirvana and Tool, but also less expected artists like Feist.

The zine will be available at its Tranzac launch, while PDF copies will be on Etsy at a later date. All of the proceeds go to Sistering, a Toronto-based agency that serves at-risk, socially isolated women who are homeless or precariously housed.

We talked to Lang ahead of the zine’s release about what inspired it, the breadth of experiences detailed within and the freedom the zine format allows.

Was there a particular incident that inspired this project?

I’ve had so many conversations about Guided by Voices at parties, on dates, in all sorts of contexts where a man will put on a song by them and I can’t even get a word in edgewise. I realized I’d never listen to them because the thrill of discovery had been sapped away.

It’s not like it’s sinister or ill-intentioned, but definitely there’s been a lot of enthusiastic steamrolling [laughs]. My friend, a very nice man, and I were laughing so much about this, and that got me thinking about how I’m sure I have so many friends who this has happened to. I was really curious to see what other people’s experiences were, and which bands came up over and over again.

What’s striking about the entries from the zine is the breadth of ways this issue affects women’s lives. Is that something you expected from the responses?

I was surprised by how many stories weren’t just an angry, irritated or funny anecdote about how “some guy told me about this band.” The stories were all just so personal, about how a band is inexorably tied to a really shitty relationship or trauma they’d experienced, or grief. I was floored by how so many people were just so unquestioningly trusting with the stories they shared.

How did the zine format help to tell these stories?

Also, visually it’s really fun to sneak Paterson [Hodgson]’s amazing drawings throughout the zine – a lot of tired-looking girls. She approached me right when the call went out and was really interested in being involved. I kept seeing that image of Frank Zappa on the toilet, and I asked if she could do a play on him being flushed down a toilet by a woman. She did exactly that, and it was really funny. 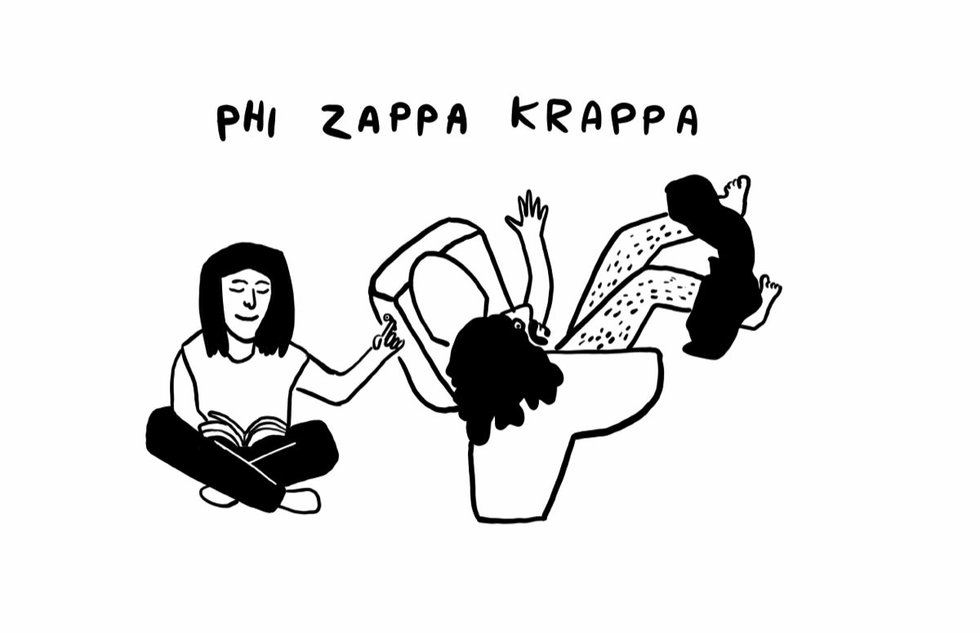 The format allows for a lot of honesty, but it also allows for me at least to be very playful and make fun of lots of pillars of the guitar-god community, which is a really fun thing to do.

Do you think that’s part of the problem, too, that the men prone to “enthusiastic steamrolling” take music too seriously?

This applies to anyone, not just those who mansplain, but when we talk about it with each other, so much of music is so stats-based, especially if you’re an obsessive collector or gear person. I don’t think that’s bad. I think that’s a product of love and total absorption, and it’s a fun way to spend your time. But it can pivot the other way, becoming this very overbearing and excluding force that makes people feel really shitty.

What are you hoping readers come away with?

I really hope people see that [the zine] is not just people ranting about crappy experiences they’ve had. It’s people sharing some very personal truths and feelings about being reduced and underestimated regarding something they love. The one thing that ties all of the contributors together is they all love music. They have a passion and are really knowledgeable about the music they love, and it’s so frustrating for them to be treated like they don’t know anything.