Amid Omicron storm, Erin O’Toole calls for “accommodation” of the unvaccinated 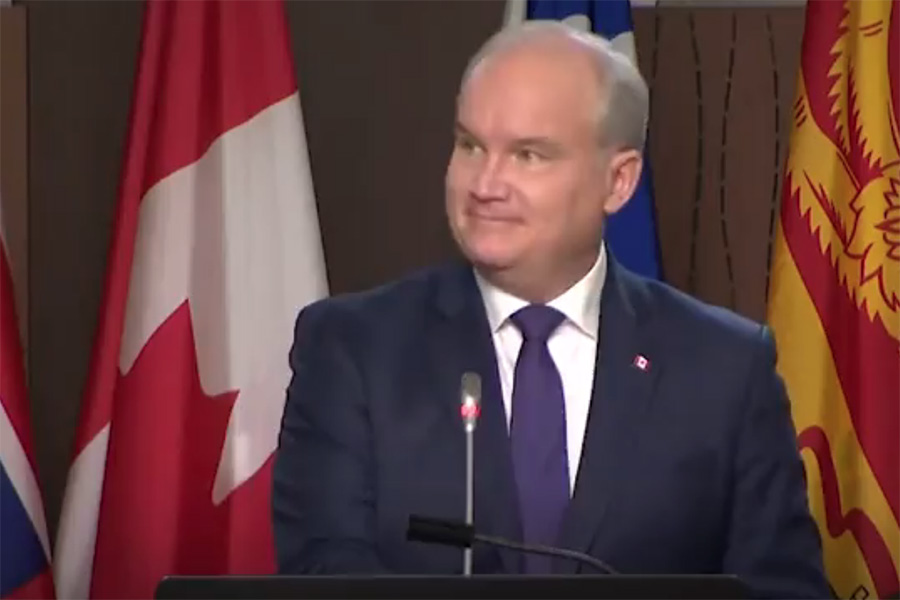 What’s got into Erin O’Toole? It’s not a nice thing to say, but the Conservative Party leader appears to have lost himself.

By all accounts, O’Toole had a nice time over the holidays, judging by his picture-postcard posts on social media from Stornoway, the official residence of the leader of the opposition.

But the Conservative Party leader emerged last week for the first time since Omicron hit more seemingly out of touch than ever.

O’Toole chose a Facebook Live event on Wednesday to make his first address of the year to Canadians. There was no opportunity for questions but there was ample opportunity for O’Toole to let viewers know just how “frustrated” he is with the Trudeau government for allegedly “normalizing” lockdowns. He even slapped the desk in front of him a couple of times just in case there was any doubt about just how angry he is. The CPC leader has become an actor out on loan.

O’Toole didn’t go as far as blaming Trudeau for scapegoating the unvaccinated “like Hitler did the Jews.” That’s the latest coming from the hardcore in his party’s so-con base who subscribe to the ramblings on LifeSite – and with whom O’Toole has been trying to curry favour. Indeed, O’Toole’s anti-vaccine MP and former leadership challenger Leslyn Lewis was quoted in an article published on the site on Wednesday calling out the PM for his “hateful and divisive” language on those who refuse to get jabbed.

But O’Toole’s histrionics did continue at a press conference on Thursday, with O’Toole suggesting that rapid testing and other “tools” like personal protective equipment could be used to lift current restrictions. He should probably be telling that to the Conservative premiers making a mess of the pandemic response in Alberta and Ontario. For a time over the weekend in Toronto, for example, there were no emergency ambulance units available to respond to calls because they were otherwise engaged with the latest COVID wave.

But O’Toole went further. He said “accommodation” should be made for the unvaccinated, as if that would stop hospital ICUs from filling up and requiring the restrictions in the first place.

As Canadians grow wearier of the pandemic – and the fact it’s the unvaccinated placing a burden on health-care systems at the expense of others in need of cancer care and other treatments – O’Toole continues to be out lines and out of step.

As federal health minister Jean-Yves Duclos said last week, discussions have already started among provincial health officials about the need to make vaccinations for COVID mandatory. The case counts seen because of the highly transmissible Omicron variant have changed the rules of the game. An overwhelmingly number of Canadians agree, some 89 per cent to be exact.

Moreover, O’Toole seems increasingly comfortable with his equivocations on COVID as the cloud hanging over his leadership gets darker.

And in politics, a tenuous relationship with the truth is never a good thing. Voters have been taking note of O’Toole’s misdirection for a couple of months now.

Nanos’s latest poll released December 31, for example, puts O’Toole at 20 per cent nationally, in a statistical tie for third with the NDP. That’s slightly lower than his rating in November. The real problem for O’Toole is that the numbers are looking more like a trend than an anomaly.

The People’s Party of Canada, for example, is eating O’Toole’s lunch in the Conservative Party’s base in Alberta and Saskatchewan, where the party is now trending at 20 per cent.

The more O’Toole tries to appease his base with manufactured outrage, the more he looks like a puppet for the anti-vaxx and self-described “freedom fighters” in his party. It’s a losing proposition. Indeed, it looks more and more like his every move these days is being determined by the latest indignation of PPC leader Maxime Bernier, who recently called the PM a “pathological fascist.” Uh huh.

O’Toole would be better served if a few of the Ontario Proud types advising him got the heave-ho. Clearly, memes tailored for right-wing echo chambers like 6ixbuzz and The Post Millennial are not a winning formula for the leader of a serious national party. The election proved that in spades with the Conservatives losing ground in BC, Ontario and the Atlantic provinces.

It’s not clear that O’Toole ever had “it” – whatever “it” is – to begin with. Too weak has been the knock.

But it’s also gotten to the point that he is no longer his own man, going from “True Blue” during the leadership to who-knows-who now. It’s not even clear that he believes his talking points or if he’s making like the lawyer he is to defend the indefensible.

He should have cleaned house after the election, but he made the decision instead to die (politically speaking) on the same hill of those in his base and the handlers around him who have been giving him bad advice, and may not in fact have his true leadership interests at heart. They are ideologues, after all. Beware the Ides of March.

An exorcism would be in order, but at the moment O’Toole is being led around by the nose.

6 responses to “Amid Omicron storm, Erin O’Toole calls for “accommodation” of the unvaccinated”