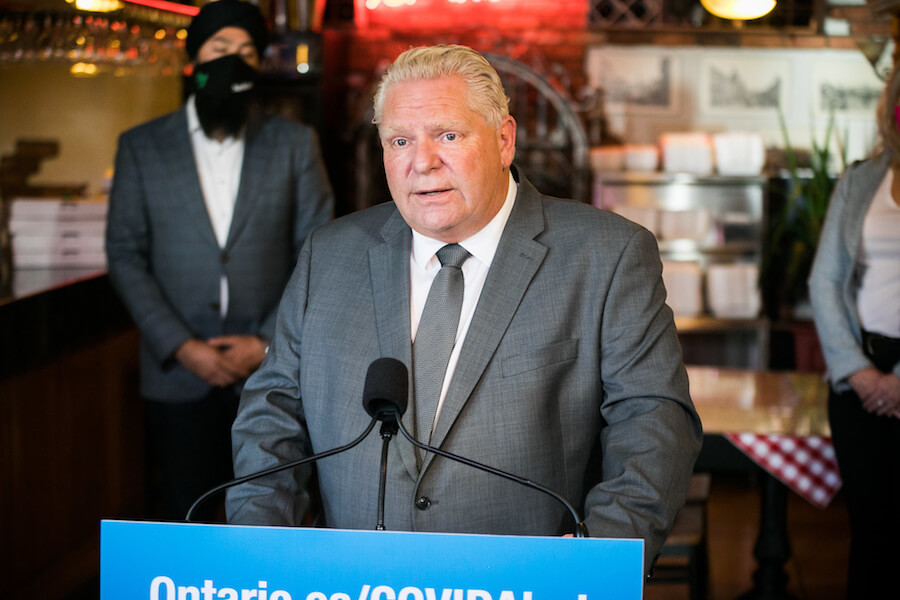 “We need you to help out these mom and pop shops,” Ford said during a press conference at Etobicoke restaurant Mamma Martino’s on October 13. “Please consider reducing the commission rates you charge the restaurants impacted by these new health measures. We can’t have restaurants paying as much as 30 per cent commission to have their food delivered right now.”

After the province closed indoor dining for 28 days as part of new pandemic lockdown measures in Toronto, Ottawa and Peel, Ford has urged Ontarians to support local restaurants by ordering takeout.

But so far, only SkipTheDishes has cut commission rates for restaurants. And Toronto-based app Ritual has extended a commission-free program for local businesses to the end of the year.

“SkipTheDishes stands by our restaurant partners as they begin to face mandated front of house closures, working closely with members of both city and provincial governments to ensure we’re best supporting all of our stakeholders,” the company wrote in a statement.

Restaurants using SkipTheDishes in the three regions affected by the new restrictions will receive a 25 per cent cut on commission rates and new sign ups will pay no commission for 30 days, the company said. Restaurants using their own staff to deliver will pay 10 per cent.

UberEats is not reducing delivery commissions. A spokesperson for the tech giant told NOW the company is waiving activation fees and reducing fees for restaurants that offer pick-up or have their own couriers.

Meanwhile, DoorDash is waiving delivery fees for customers that spend more than $25 at local restaurants in Toronto, and is offering free delivery every Wednesday during winter months to help boost sales in Canada and the U.S.

A spokesperson for the company said the platform will waive commissions for 30-60 days for new restaurants that sign up.

“Merchant fees vary by restaurant, are agreed upon individually, and cover Dasher pay, credit card fees, insurance, and more, including customer support teams for merchants, customers, and Dashers,” a DoorDash rep said in a statement.

On Wednesday, Mayor John Tory announced that Ritual is extending a partnership with the city to help local businesses increase commission-free sales.

In May, the city and Ritual teamed to launch the platform Ritual One to encourage all businesses to offer delivery and takeout. Businsesses that signed up before June 1 received the service free for life and do not pay commission or monthly subscription fees.

Since then, 1,211 local businesses signed up, the company said in a press release.

The platform is typically available for restaurants, bakeries and bars, but the deal with city allows all kinds of businesses to sign up.

Ritual will now offer the commission-free ordering platform to Toronto businesses at no cost through the end of the year. Set-up and monthly subscription fees will also be waived.

The meal pick-up app has teamed with DoorDash Drive to fulfill delivery orders. Under the extension, Toronto businesses will also get two weeks of free delivery between October 26 and November 8. All flat fees will be waived for both customers and local businesses during that time.

After pandemic lockdown measures began in the spring, advocacy groups and Tory put pressure on tech companies to lower fees to no avail.

Independent MPP Amanda Simard and Ontario Green Party leader Mike Schreiner are among the provincial politicians that have urged Ford to impose a 15 per cent cap on commission fees.

“If we want independent restaurants to survive, then we need to do more than ask Uber Eats for a favour,” Schreiner said in a statement. “The Premier can put an end to price gouging right now by capping commission fees at 15 per cent, which will give small restaurants a better chance to survive the 28-day indoor dining closure.”

Update (October 15): This story has been updated with a statement from DoorDash.