Ford is reportedly set to dump finance minister Vic Fedeli, but what he really needs to do is get rid of chief of staff Dean French, his old Etobicoke pal who has been acting like Dr. Evil again 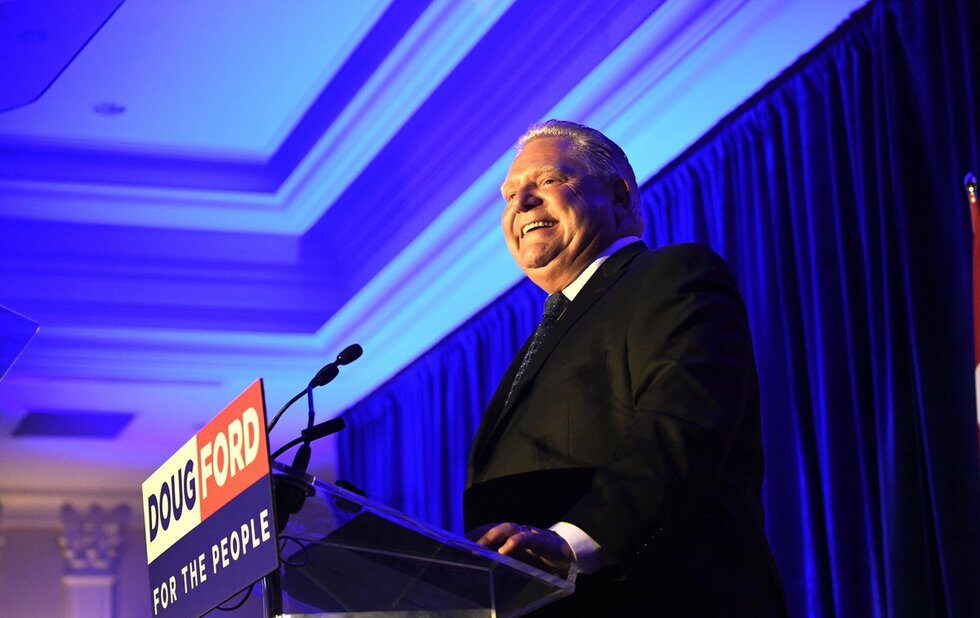 Who knew? Doug Ford is a communist – or so the Star reports.

According to the paper’s Queen’s Park bureau, the PC leader’s stranglehold on his caucus is such that his own MPPs have taken to comparing the workings of the government to the Soviet KGB.

Apparently, Ford’s chief of staff Dean French, whose leadership style has already come under fire, has been acting like Dr. Evil again. That would be the same French who has been taking names and keeping score of MPPs who do not dutifully applaud Ford enthusiastically enough during Question Period.

Such is the level of paranoia infecting the Ford administration that the premier’s chief of staff spends most of his time these days trying to ferret out possible traitors. Bunker mentality seems to be setting in.

French reportedly brought a female MPP to tears recently for daring to speak up at a caucus meeting. (The Star didn’t identify the MPP in question, but I’m told by one Queen’s Park insider that it’s Mississauga MPP Natalia Kusendova and that she’s not the only female MPP to be scolded by French).

Ford’s Etobicoke pal has been a fixture at caucus meetings, sitting at the front with Ford and dutifully taking notes (and apparently keeping score). It’s made MPPs wary of stepping out of line. Now French is suing former PC caucus member Randy Hillier for allegedly defaming his good name after Hillier got booted from caucus.

Ford may not have colluded with the Russians to win last year’s provincial election, but it’s not the first time the workings of his regime has been compared to a dictatorship. To be sure, his government has ruled by fiat.

Beginning with using the notwithstanding clause to cut Toronto council in half and cancelling renewable energy and other contracts for purely ideological reasons, it’s been one attack after another on our democratic institutions – not to mention the poor, health care and education.

What is it about so-called populists that makes them act like authoritarian dictators when they get into power? Maybe they’re not populists, but fakes simply employing populist rhetoric to get elected. That would certainly apply to Ford and his death by a thousand cuts visited on Ontarians under his “For The People” austerity agenda.

Now, fresh from announcing a five-month hiatus of the Legislature so he can go lick his wounds – and not have to deal with the opposition in Question Period – Ford is planning a cabinet shuffle to “reset” his government in the face of those tanking public opinion poll numbers.

Who’s in and who’s out remains to be seen but the media spin coming out of the premier’s office is that he’s not happy with the way the PCs’ first budget was received in April. That’s saying something given how the PCs somehow managed to spend $5 billion more than the Kathleen Wynne Liberals’ last budget while cutting the shit out of everything.

Maybe that middle-class tax cut (which was really and upper-middle class tax cut) wasn’t such a good idea. Putting Vic Fedeli in charge of the province’s finances was bound to end badly. Word is he’s out. Meanwhile, Lisa MacLeod has been a train wreck in children’s services.

Ford was warned, but he chose to surround himself with loyalists instead of those who will occasionally tell him how things really are. Ford prefers undying allegiance to smarts.

After the Kusendova incident, Ford met with his caucus privately to offer assurances that things would be different moving forward. And that they should feel free to bring any grievances to him personally. Caucus reportedly gave him a standing ovation for that one.

But let’s be real, folks. Ford likes to tell people what they want to hear. He’s made a career of it. So don’t expect this mea culpa – or exercise in shuffling chairs in his cabinet – to change anything. It all amounts to putting lipstick on a pig.

What Ford needs to do is get rid of French. It’s obvious.

The clock has reportedly started ticking on that one with the premier seeking advice on the question from two top party officials. “It’s only a matter of when not if,” that French is gone, says my PC source.

But Doug has a problem. French is a close personal friend and cutting him loose would mean bringing in someone from the outside. Ford distrusts government officials in general and outsiders in particular.

We’ve already seen that with Jenni Byrne, Ford’s former principal secretary, who was brought in to fill a key advisory role. Byrne was pushed out after questioning Ford’s move to use the notwithstanding clause to cut Toronto city council in half. She understood the terrible precedent it was setting. But Ford went commando on that one, bypassing completely even the advise from government bureaucrats. Byrne was handed a plum to sit on the Ontario Energy Board.

But the exodus of key Ford staffers has continued as Ford’s approval ratings have gone into the shitter. And it’s only going to get worse as political staffers, already run ragged by a government seemingly on fumes, are looking to jump ship.

A few have already moved to join Jason Kenney in Alberta. Dozens more are expected to leave Ford after the federal election, with the Conservatives under Andrew Scheer poised to win as many as 30 seats in Ontario.

For Doug, it’s beginning to look a lot like the situation critical that led to little brother Rob’s downfall after the infamous crack scandal, when no political staffer worth his or her salt wanted anything to do with him. The workings of government practically ground to a halt. Ford is faced with the prospect of something similar if he doesn’t do something about French soon.