NOW MagazineNewsThe accidental premier: a year into his reign of chaos, Doug Ford is on the bubble

The accidental premier: a year into his reign of chaos, Doug Ford is on the bubble

Behind the scenes, key staffers are leaving and no one knows who’s in charge anymore – the trajectory is beginning to look a lot like the one that led to his late brother’s political demise. 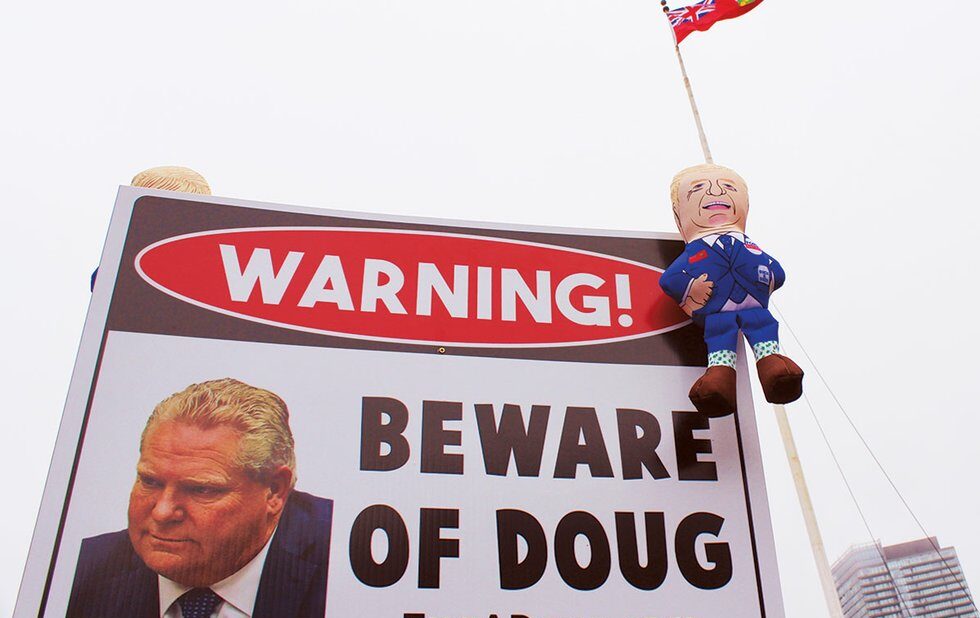 Doug Ford has shat the bed.

A year into his reign of cuts and chaos, the self-anointed premier “For the People,” finds himself on the bubble with disapproval ratings across the province hitting 75 per cent, including in traditionally conservative hotbeds of support right across Ontario.

Ford’s campaign to defund essential services and privatize everything else has turned conservatives in his own party against him. According to one recent public opinion poll, three out of 10 PC members who voted for Ford in 2018 would not vote for him again if an election were held today. The decimated Liberals with only seven MPPs don’t even have a leader and they’re neck-and-neck with the PCs.

Behind the scenes, meanwhile, disorder abounds. Insiders paint a portrait of a premier going through the motions, seemingly indifferent or unaware of the ramifications of his decisions and the decisions of the ideologues around him who think government can be run like a household. A number of key staffers have jumped ship recently, including Mitchell Davidson, Ford’s executive director of policy, and last week David Tarrant, his director of strategic communications. No one knows who’s in charge anymore. “There’s a lot of unrest,” says one PC insider.

The internal fractures are beginning to appear publicly, most recently via the leak of a cabinet document to the Star suggesting the Ford government had plans for even deeper cuts to social services in the April budget, but were talked out of it (at least for now) by senior government bureaucrats who warned of the mass devastation, including deaths, that would follow. Welcome to Ontario.

The election of 2018 seems like so long ago – time flies when you’re Ford and making a mess of the province. But at this time last year, as Ontario voters were contemplating handing Ford the keys of the palace, it seems many of them had no idea what a disaster he would turn out to be. 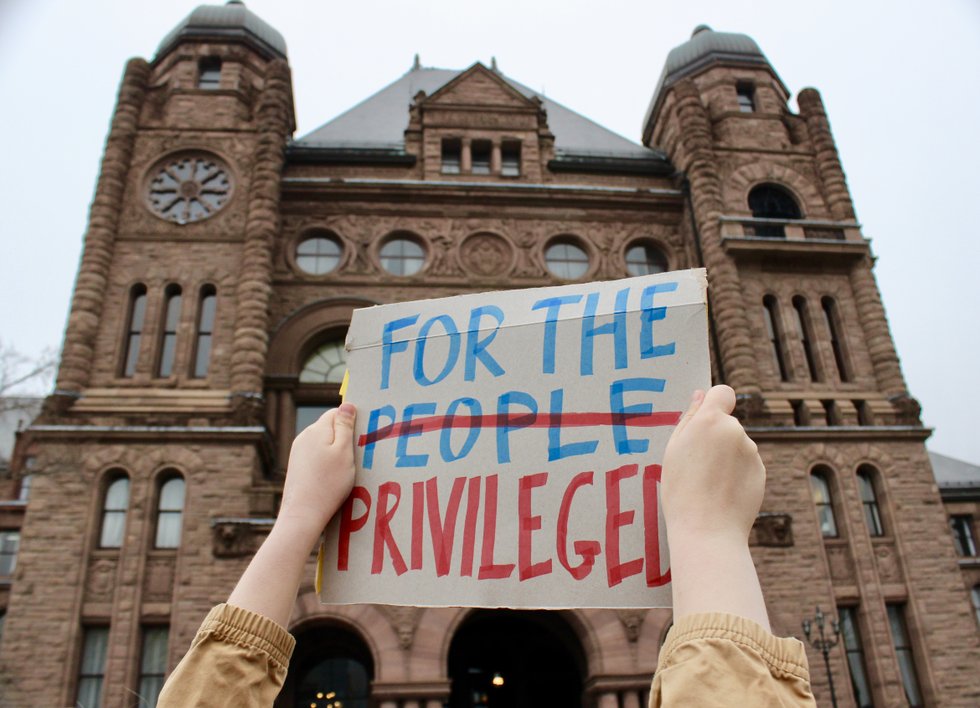 “PEOPLE BOUGHT A PIG IN A POKE.”

Hard for most people to remember now, but Ford won with 41 per cent of the vote. Moreover, he did that without releasing an election platform after stealing the PC leadership from under Christine Elliott, who was seemingly the consensus choice to take over the party after Patrick Brown’s timely demise.

Ford took over a party up some 20 points in the polls. And he rode that to a majority for no other reason, seemingly, than the fact that the electorate wanted change for change’s sake after 16 years of Liberal rule.

Ontario politics have historically turned on a knife edge between Liberals and Conservatives – save for the NDP’s out-of-the-blue win under Bob Rae in 1990. But the election of 2018 was something altogether different. Blame the coarsening of our political discourse – or just plain stupidity.

“People bought a pig in a poke,” says one political observer.

After a slew of broken promises, Ford has turned BS spun on the campaign trail from political brand to modus operandi as premier. There’s an entire taxpayer-funded apparatus, the premier’s personal propaganda agency, aka Ontario News Now, devoted to promoting the Ford brand and parlaying the “news” of the day into social media fodder for Ford and fundraising opportunities for the party. (Donate your $1 here.)

Despite the public backlash, there is no sign that the government intends to back off. The message to party staffers at Queen’s Park is to double down and dig in.

From buck-a-beer and liquor and wine in corner stores, to licence plate mottos and increasing the speed limit on Ontario’s highways, it’s been one big smorgasbord of symbolic feel-good gestures all carefully constructed to appeal to Ford’s base, while the real damage from sweeping policy changes is being orchestrated by Ford Reformers, as some have taken to calling the conservative dogmatists he’s surrounded himself with in the background, in particular his chief of staff, Dean French.

The blitzkrieg of cuts includes child care spaces, lunch programs for kids, classroom size, autism funding and public health – not to mention, Indigenous and mental health services and an agenda to privatize health care and education. Ford has also reversed policing reforms and anti-racism work literally decades in the making. On climate change, the most important issue of our time, Ford has turned the debate into a game of stickers, threatening gas station owners who don’t post government-mandated anti-carbon tax labels on pumps with huge fines.

The Ford government has embarked on a program to achieve nothing less than the dismantling of the social welfare state in Ontario as we know it – which has led to a downgrading of the province’s credit rating in the process.

A chance confluence of events may have carried Ford into office, but the devastation he and his administration are unleashing is no accident. It was thought after he was elected that the sheer task of running a complex provincial government would tame his baser instincts. The learning curve has been a steep one.

And despite the public backlash, there is no sign that the government intends to back off. The message to party staffers at Queen’s Park is to double down and dig in. On May 21, the premier was in friendly Con territory in Ajax presenting a united front with a number of MPPs after another poll, this one from Environics, showing his government’s approval ratings tanking.

But it’s not clear that it’s Ford who is in charge. His energy for the job seems to be waning. Some around Queen’s Park have taken to calling Ford “the accidental premier.”

He’s not exactly taking to his surroundings like a man who has waited his whole life to follow in the footsteps of his late father, Doug Sr., who served as a backbencher under Mike Harris. He doesn’t read his policy books. His attention span is said to be short during government briefing meetings. He’s seemed mostly indifferent. “There’s no passion to accomplish anything of substance,” says one Liberal party observer. Ford would rather be closer to home in Etobicoke than running around the province shoring up support for the party.

Politically speaking, the trajectory after year one in office is beginning to look a lot like the one that led to his late brother’s demise when he was mayor of Toronto, right down to the bizarre phone calls with supporters late at night, which have begun to surface on social media.

What’s changed? Looks like those best-laid plans to take over the federal Conservative Party, which isn’t happening anymore, has a lot to do with Ford’s lack of energy for his current job. 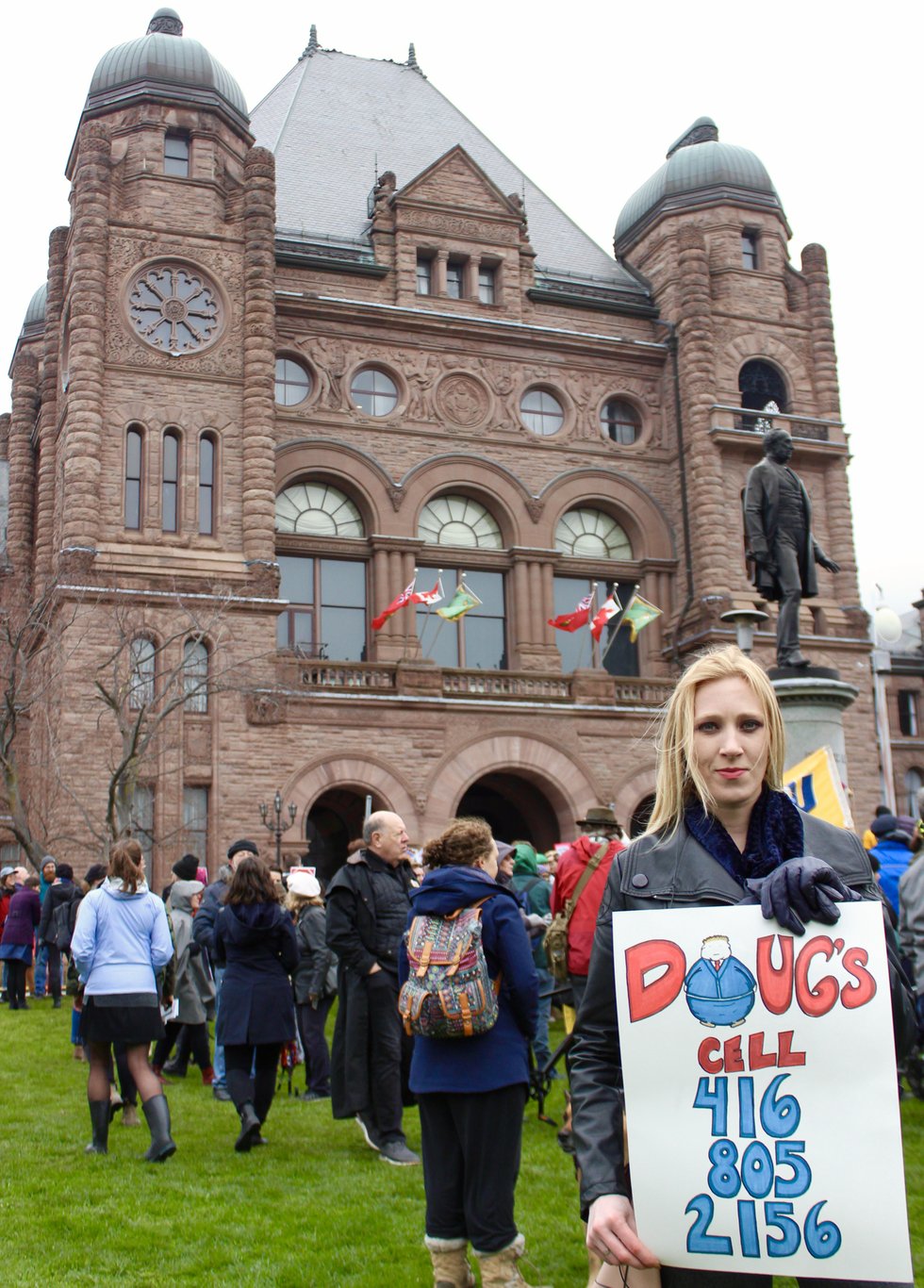 In the afterglow of his election win, it looked like Ford was on the fast track to an Ottawa take-over of the federal party.

That was when he graced the cover of Maclean’s as the unofficial leader of the so-called Conservative “resistance” to Trudeau – and back when current Conservative federal leader Andrew Scheer seemed headed for defeat in the October federal election.

But after the Liberals’ SNC-Lavalin imbroglio, that’s all changed. Scheer is no longer going to be out after the next election. At the very least, the Cons will increase their seats in the House, ensuring Scheer stays on.

For a while there after the election, Ford was keeping a low profile. The only communication coming from the man himself were those fundraising email blasts to party members. That was after he tried to put the fix in for his bud Ron Taverner to get the top job of OPP commissioner.

But these days Ford has been relegated mostly to the role of salesman and handing out plum appointments to his friends when he isn’t posing for photo opportunities and taking credit for projects started under the Liberals. He seems to be running out of material.

PC MPP Randy Hillier, who was bounced from the caucus for his outspokenness about the “vacuum of leadership” in the premier’s office, describes an “inordinate” and “obscene” concentration of power in the hands of “unelected caucus leadership” in Ford’s office. It’s like a cult. Those MPPs who dare to step out of line are “shunned, marginalized and ostracized,” Hillier said in late March in an interview with TVO’s Steve Paikin.

Ford can bank on caucus solidarity – at least, for now. Some two-thirds of PC MPPs were elected for the first time in 2018 and owe their jobs to him. Those among them who have their own leadership aspirations, like Rod Phillips and Caroline Mulroney, are content to sit back and watch things play out. 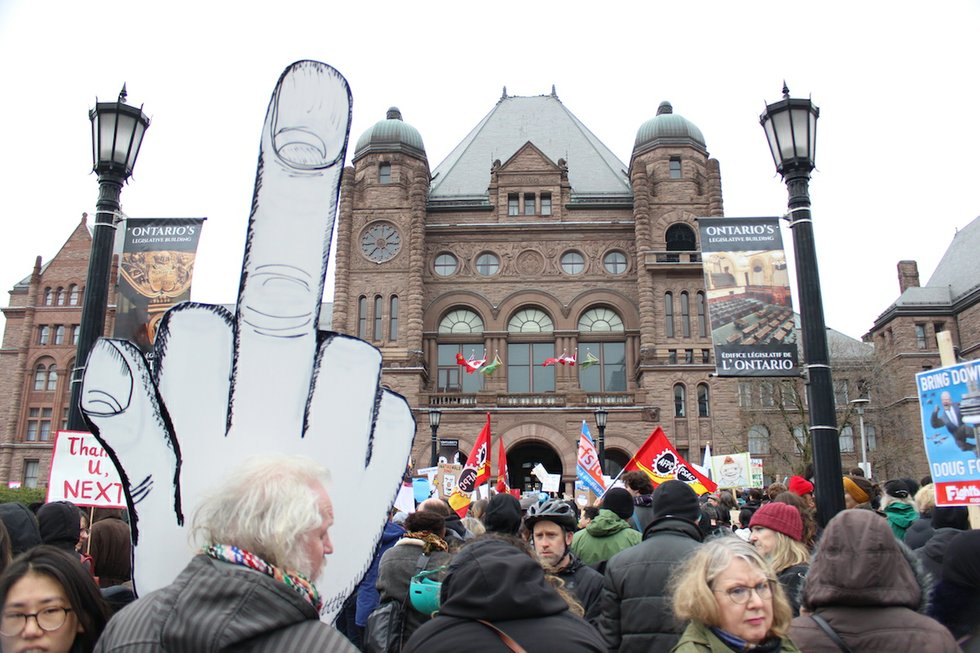 CAN DOUG FORD BE STOPPED?

In some ways, the Ford government has set itself on an irreversible course. Ontarians will just have to suck it up. Last week’s announcement that the province will no longer fund stem cell research is another indication that the Ford government has “cleared the pitch and is not looking back,” as one source puts it. (When younger brother Rob was ill with a rare form of cancer, stem cell research was used in the hopes of finding a cure. Maybe Doug forgot about that.)

We’re still three years from a provincial election – that’s a lot of time for Ford to plunder with impunity.

But there are signs that Ford is feeling the heat of recent polls.

Lately, he’s has upped the rhetoric on his political opponents. When he’s not attacking “Marxists,” he’s ignoring questions in the Legislature altogether.

The boos he was greeted with last week at the opening of the Special Olympics were a wake-up call, insiders say – as was the poll showing a Liberal party led by John Tory would win against Ford. The latter was meant as a shot across the bow – a Tory-led Liberal party is not going to happen, but Ford’s disdain for the Toronto mayor is well known.

And the fight Ford has picked with Toronto over provincial cuts that have left a $200-million hole in the city’s budget is beginning to look like the thin edge of the wedge that may mark the beginning of his undoing.

On Monday, the city upped the ante in that battle, announcing that property tax increases in addition to the ones already announced, will be needed to cover the shortfall. That’s making Toronto-area PC MPPs nervous. A door-to-door literature campaign targeting their ridings is also in the works. Other municipalities may follow suit. Whether that will be enough to force Ford to backtrack on his austerity agenda remains to be seen. How long before drums in Ford’s head start beating for him to drop French as his second-in-command? That may only be a matter of time as Ford’s poll numbers continue to plummet.

If the political pressure doesn’t get to Ford, maybe hubris will.

Those who know him say Ford is desperate for attention and acceptance – that he just wants to be popular. It’s too late for that.