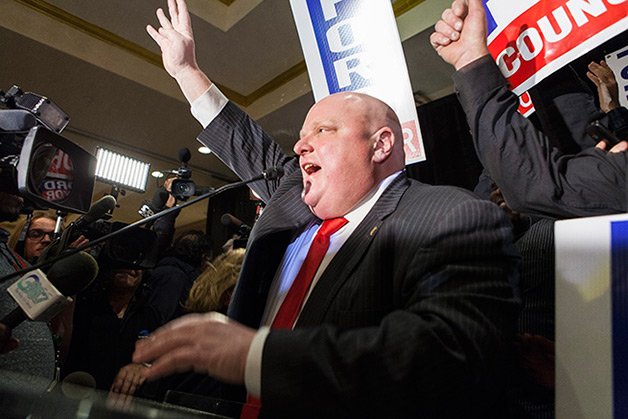 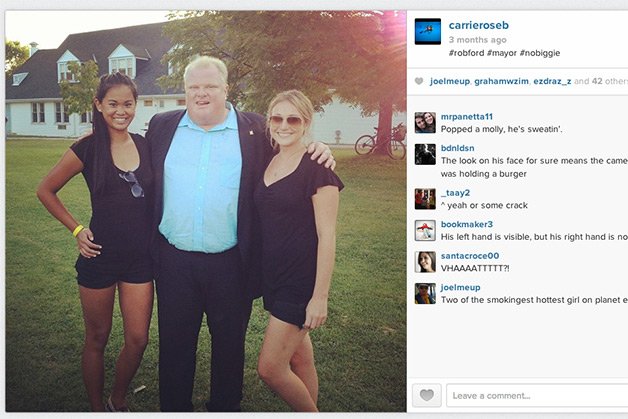 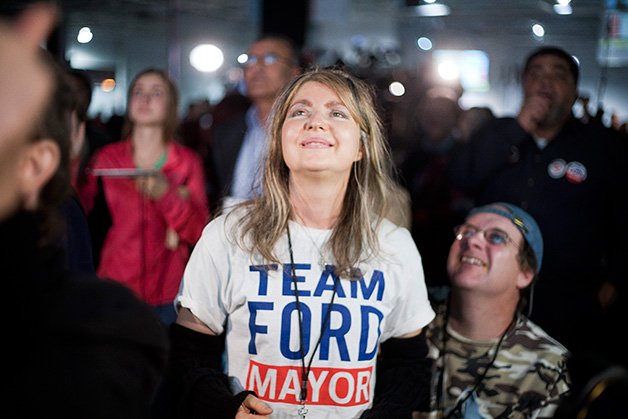 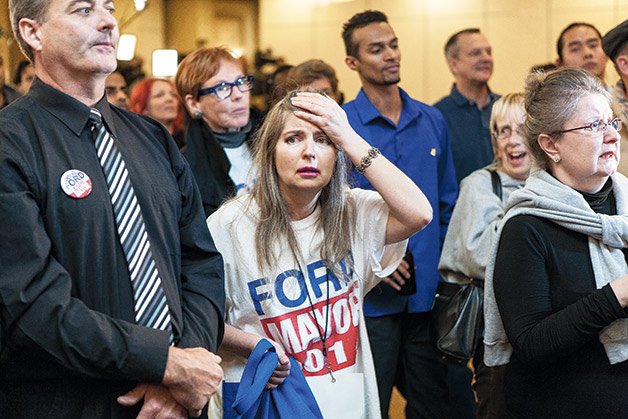 The moment Doug Ford stepped outside, it began to rain.

Leaving the Woodbine Banquet Hall at 10:30 on election night, he and his family piled into the RV that bore his face on the side. The Fordmobile was grinning, but Councillor Ford was not.

Included in his entourage was senior campaign staffer Graeme McEachern, who days earlier had boasted on Twitter that Ford would take the mayoral election with no fewer than 400,000 votes. In the end, he received 330,610 to John Tory’s 394,775. Olivia Chow finished third with 226,879.

Packed inside the garish vehicle, the inner core of Ford Nation drove away – less sailing off into the sunset than making a left onto a wet, dark Highway 27.

Not everyone went with. Oldest brother Randy stuck around the dwindling party, briefly joining the dance floor for Thriller. Speaking to NOW’s videographer, he wouldn’t preclude his own run for office in the future.

The Fords are both defeated and enduring. Their grasp on the city has slipped, but they have by no means let go.

Five hours earlier, I’m bounding along Etobicoke’s St. Phillips Road in a BMW driven by Cynthia Amsden, a film publicist who’s taken a job running communications for the Andray Domise campaign. Domise, a financial planner with roots in Rexdale, is running to be councillor for Ward 2 (Etobicoke North), the seat held by one Ford or another since 2000.

Amsden, a proud downtowner, explains that she hooked up with the campaign in September – when Rob Ford replaced his nephew on the ballot following his cancer diagnosis, and Domise’s campaign manager joked on Twitter, “Does anyone have @jimmykimmel’s number?” She tweeted back offering a contact.

For a publicist, she says, taking on Ford is “the motherlode.” The posh British voice of her GPS system interrupts her story as it barks out directions to the Dixon towers.

The high-rise neighbourhood east of Kipling, made infamous by the Project Traveller raids (that netted, among other things, a copy of the first Rob Ford crack video), is where Domise will spend the last few hours of his campaign. The area has thousands of residents living in close proximity, making it an efficiently dense place to pull the vote. We cross paths with would-be trustee Dahir Galbete and supporters of rival council candidate Munira Abukar.

Domise is accompanied on the canvass by two volunteers plus a man shooting a documentary and a camera crew from Humber.

Starting at the top of 370 Dixon, he works his way through, door by door, floor by floor. It’s like pretty much every other modernist apartment building in Toronto, with hallways whose quiet is sometimes pierced by the sounds of children and dogs.

I stand aside as Domise speaks to residents, and seldom catch more than an arm through a door frame. To be closer would feel like intruding on a sacred moment of democracy.

Many residents say they’ve already voted, which could be true or just a polite way to shoo Domise off. Some are too young to vote, others aren’t citizens, and still more are simply unable or unwilling to make it across the street to the polling station.

“We’ve been at this for six months,” Domise reflects between floors. “That’s not gonna reverse 14 years of enforced apathy.”

At the Ford party, the biggest cheers come early, when CP24 declares Rob the victor in Ward 2. He takes 58.8 per cent of the vote, nearly six times that of runner-up Luke LaRocque. Domise winds up third with 8.2 per cent. Abukar fourth with 6.1.

The event is otherwise bleak, held in a hall a fraction the size of that which hosted the Fords’ 2010 bash. The room could be expanded by opening dividers, but there is no need. The last remnants of Ford Nation fit comfortably, a far cry from the crowd of four years ago that forced the victorious candidates to literally shove their way to the stage.

Back then, Rob barrelled in to Eye Of The Tiger. This time, Tom Petty’s I Won’t Back Down. But the music doesn’t start until he’s already at the lectern and keeps playing through the first part of his speech.

His address is seven minutes of empty Fordisms peppered with references to the next election.

“We, today, have got to start working for November of 2018,” he says. “What that exact date will be, I’m not sure.” (Ontario’s municipal elections are fixed by law on the fourth Monday of October, so if nothing changes, it’ll be October 22.)

Some of his supporters shout “Come again!” not as a substitute for “Pardon?” but as an impassioned plea to a departing messiah.

When Doug later takes the stage to the same piece of music, he is greeted by chants of “Recount! Recount!”

“Together,” he tells his adoring fans, “we have changed the political landscape in Toronto. It is the city made up of vibrant communities from every corner of this globe, all of whom share the same belief that government should be for the people.”

He’s effectively describing democracy as though it’s a radical concept. And to those who drown out the end of his speech with further demands for a recount, government for the people may indeed sound like something of a novelty: the Fords’ substantial talent is helping the powerless feel empowered, as though someone is responding to them for the first time in their lives.

Several people reply to his speech with proclamations of “In Ford we trust.”

If you’re looking to bring Ford Nationals toward reality-based politics, the only hope is to elect someone who can improve their circumstances in ways the Fords only promise.

Shortly before the polls close, I find Abukar at Dabagoye restaurant on Martin Grove.

She’s wrapping up dinner before heading to her party in a hall above a furniture distributor next door.

The 22-year-old is a director of the Toronto Community Housing Corporation, one of the two tenant representatives elected to the board in 2011.

To her, the Fords are frauds who prop themselves up on the backs of the people they claim to be serving.

“It’s me taking all the myths that they sold to the city and saying, ‘Well, look at them: I’m unravelling every lie you’ve told, every myth you’ve told about the work you’ve done for the people.'”

“If you’re saying you’re calling TCHC residents and fixing their homes,” she says, “well, buddy, my home is still broken. And I live right close to you. I’m the closest TCHC neighbourhood to you. When it comes to you saying you’re there for the community, it’s me being at Dixon and saying, ‘Well, I’m here where Project Traveller happened, and I’m not the councillor – so where are you, right?'”

Abukar’s frustration bursts out in intense, rapid-fire explanations of the Fords’ alternately indifferent and paternalistic relationship with marginalized communities. (Domise has diagnosed the same issue.)

In particular, as a young woman of colour who lives in community housing, wears a headscarf and whose signs and volunteers have been subject to racist and Islamophobic attacks, she resents the Fords casting themselves as “the little guys.”

“You’re not the little guy if you’re driving around in an RV that has your face on it.”

Her campaign, she explains, is about declaring, “Hi, over here – I’m the little guy. And I’m telling you you don’t speak for me. I speak for myself.”

Just as with the city as a whole, Ward 2 has to wean itself off of a civic paradigm in which the Fords automatically take up the central role.