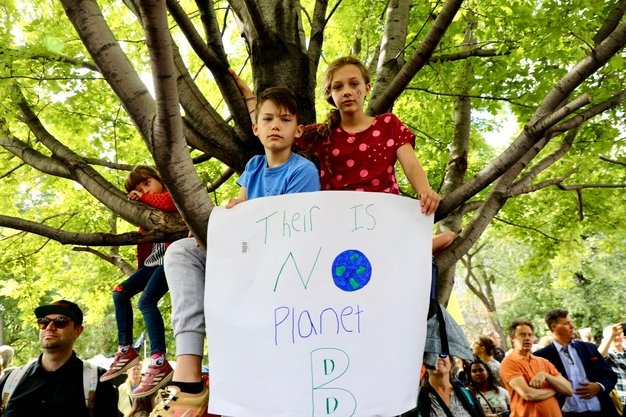 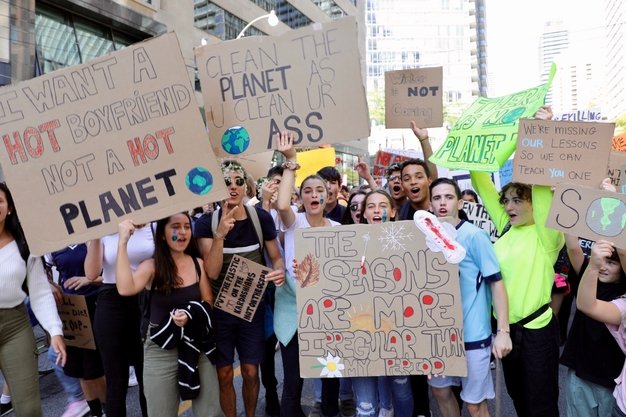 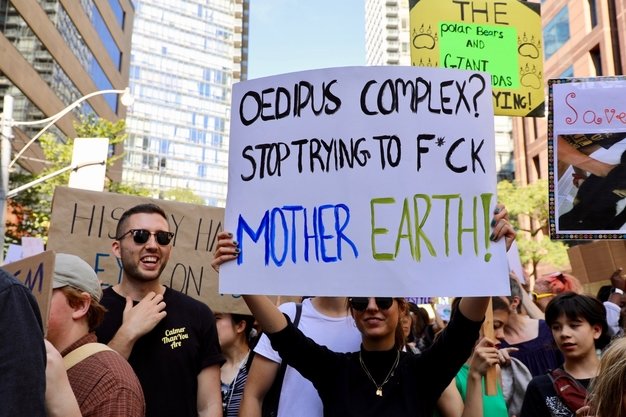 “Did you buy the planet dinner before you fucked it?” reads the sign of Erblin Hysi at the Toronto Global Climate Strike at Queen’s Park on Friday.

Thousands turned out, many of them high-schoolers and elementary school kids. They joined thousands more in cities across the nation calling on governments to put the brakes on the destruction of a habitable Earth.

While high-schoolers carried signs with messages of raging hormone-filled humour – “This is not what we meant by hot girl summer” “Oedipus complex? Stop trying to F*ck Mother Earth” “Keep the Earth clean its not Uranus” –  elementary school kids brought dead serious warnings.

“Maybe a couple of decades,” is Sebastian Lounsbury’s estimate of “when we’re all going to die. I’m 11 now, so probably when I’m 31.”

I found Sebastian and his twin Claire perched in a tree surveying the packed lawn of Queen’s Park. Their sign they held read “There is no Planet B.”

“I find it kind of sad,” says Claire, “that people of your generation are counting on us to change the environment but by the time we are old enough there won’t be anything to change. It will be too late.” 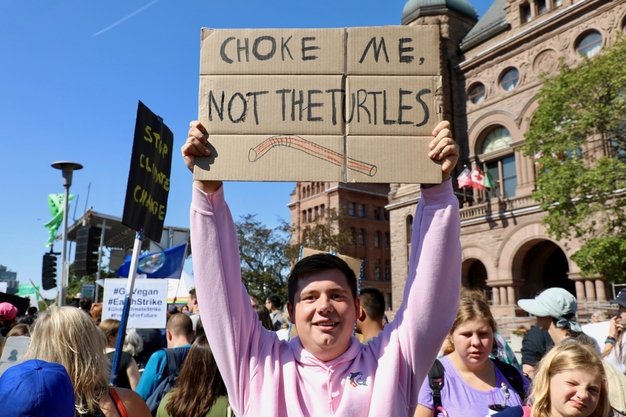 Joey Balke’s sign, an image of a plastic straw, reads, “Choke me, not the turtles.”

Nearby, Caitlin Rothman is sitting on the grass. “I would be in school if our planet was cool,” reads her sign. “We don’t have much time left,” she says.

Rothman is with her mother. “The other kids from my school don’t really care about it,” says Rothman, “they didn’t want to hear it.”

“It’s better to know the truth than not,” says the devastatingly articulate 8-year-old. “It’s like big corporations just want to make money and they don’t care that if this keeps happening people are all going to start dying.” His mother Erica is holding his hand. 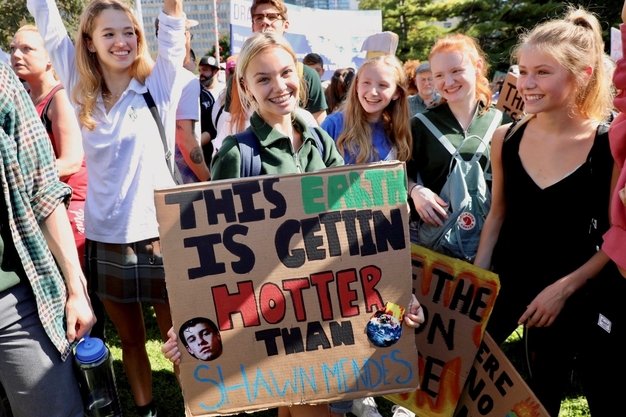 “This Earth is gettin’ hotter than Shawn Mendes,” reads the sign held by Bronwyn Lyons, a student at the National Ballet School who tells me she danced the role of Tanya in the National Ballet’s adaptation of Tolstoy’s Anna Karenina.

Says Lyons, who then adds seriously, “Our world is going to come to an end and I’m not seeing enough changes that we need to see.”

“The heat, ice ages, tsunamis, tornados, natural disasters, its scares me, I think about it a lot and a little bit at the same time,” says Luna Gatkowskivio carrying a sign that reads “Time to Think, We don’t want to be EXTINCT.” 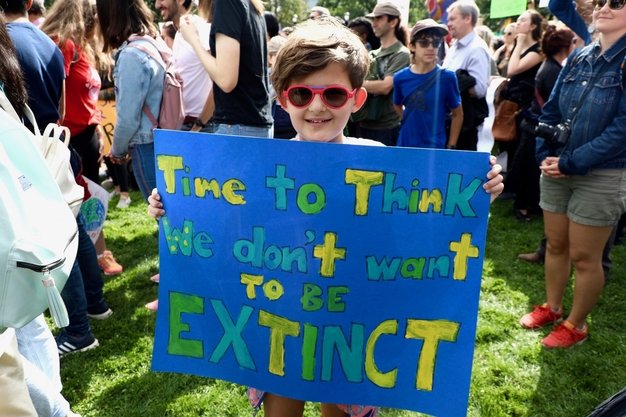 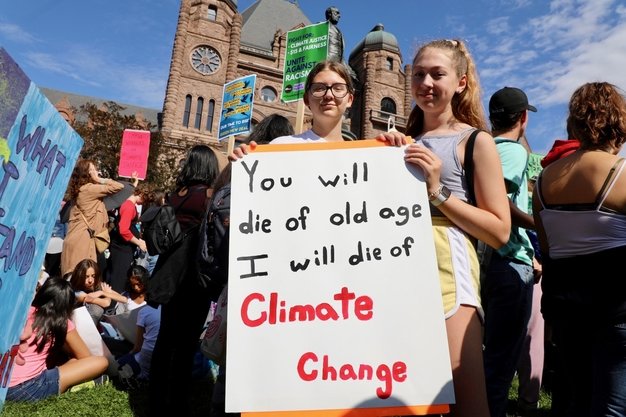 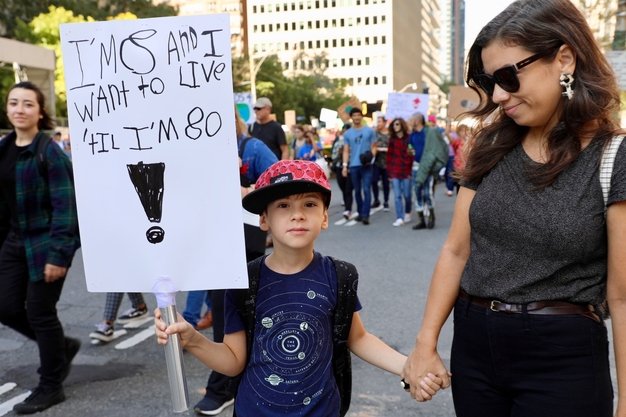 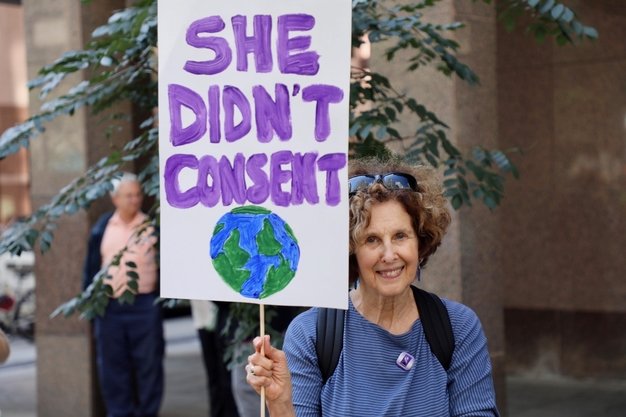 “I just want time for everyone else, its kinda dark to think of it that way but if we can do anything at all to slow it down to give anyone else another chance that’s enough for me,” says Daila Labatt, who posed with friend Blaire Miller holding a sign, “You will die of old age, I will die of climate change.”

“Earth did not say ‘Yes, you can destroy me, its that simple,’” says Susan James who took a break from marching to stand on the sidewalk and watch the people course down the route. Her sign reads “SHE DIDN’T CONSENT.”

If there was one sign that stood out in the Toronto protest it was this one writ large: “IF YOU’RE READING THIS IT’S NOT TOO LATE.” 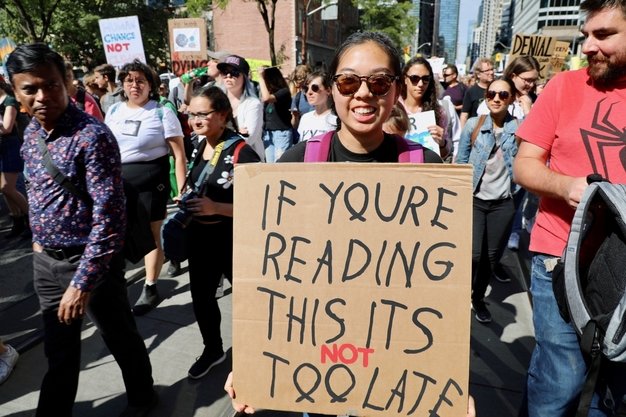