On Saturdays, the Moss Park Hockey League is hockey heaven for local boys and girls without the dollars to pay for ice time 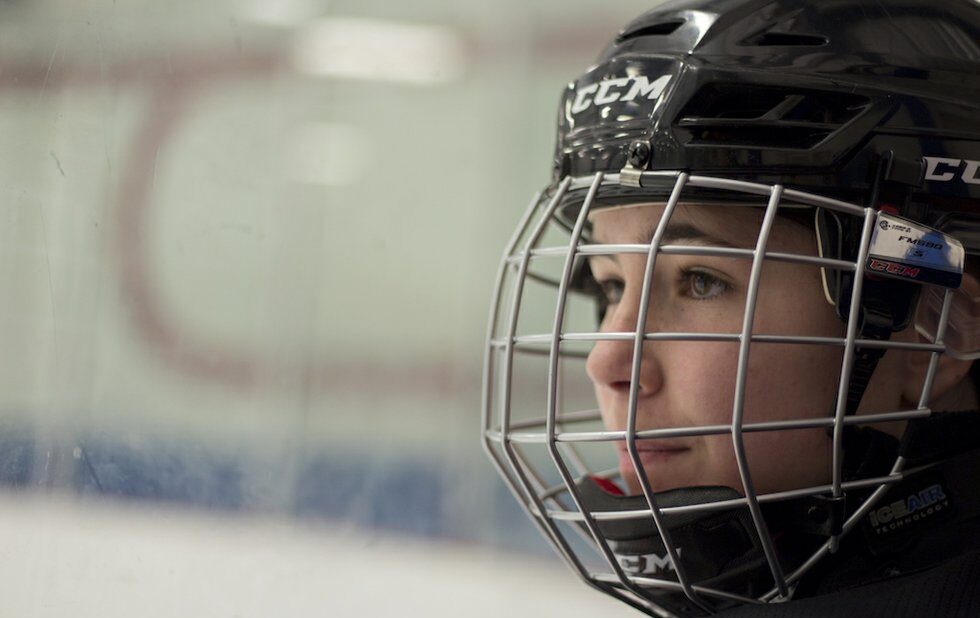 Gone are the days when a wooden stick and a beat-up pair of hand-me-down skates were enough to satisfy a kid’s hockey dreams. Youth hockey is facing an affordability crisis that is keeping many kids from playing.

But in a time where families routinely pay thousands of dollars to play hockey, the Moss Park Hockey League is showing that cost needn’t be a barrier to kids getting on the ice. It’s the only league in the city that is completely free.

“The kids see their friends playing hockey, they see it on TV. It’s supposed to be Canada’s sport,” says April Hodgins, who runs the league at Moss Park Arena, located a 10-minute walk from the Eaton Centre in one of Toronto’s poorest neighbourhoods. On Saturdays, it’s hockey heaven for local boys and girls without the dollars to pay for ice time.

How much the sport costs is a touchy subject in the hockey community. While bygone superstars like Wayne Gretzky or Gordie Howe came from working-class families, these days wealthy parents are hiring conditioning coaches and ice time in the summer in the hopes that their children might one day play in the NHL.

Hodgins, a teacher at Duke of Connaught Public School, holds court in the arena office, a small room filled with spare equipment and cartons of chocolates that players sell to raise funds.

“When you have children, and they want to try something, you do it,” Hodgins says. “Hockey players are role models for so many of these kids: Sidney Crosby, Trevor Daley.”

Roughly 250 kids up to 13 years old are enrolled in the league, which draws players from around the Moss Park Arena, many of them new immigrants.

“We go from Yonge Street to Coxwell, and from the lake up to Bloor,” says Jay Sonhand, a league convener. “In that area, you have Regent Park, St. James Town, the Esplanade, Blake Street, Walpole – lots of housing complexes and areas where not everyone can afford to play hockey.”

One of the most important things Moss Park does is supply equipment for those who need it.

Years ago, the NHLPA, the union representing NHL players, donated 60 full sets, including bags, delivered by then Leafs Captain Mats Sundin. Since then, most of the donations have come from individuals.

“It costs $300 just to register for house league,” Sonhand says. “Then you have to buy equipment on top of that, which is another $200, and the kid outgrows it the next year.”

That house league fee may seem paltry compared to the thousands some parents spend for higher-level hockey. Moss Park isn’t trying to compete with those leagues, but rather, as Sonhand puts it, “let people get their feet under them.”

And for some, Moss Park does lead to bigger things in the sport .

“We have kids that came from here and now they’re playing Junior A, AA, AAA,” says Sonhand.

In two cases, Moss Park has acted as a stepping stone to the NHL. Glen Metropolit, who once played for the Canadiens, used to play here. So did Trevor Daley, who won the Stanley Cup with Pittsburgh last season.

When Daley brought the Stanley Cup back to Toronto last summer, he let the area kids come check it out, including Hodgins’s twin boys.

“We’re more about community than making money. It’s not about that – it’s about letting kids play,” he says. The arena donates the Saturday ice time every year, saving the league about $50,000.

Pisano played here when he was younger. Under his guidance, the arena has become more involved in the league than ever.

But the future is uncertain. A redevelopment planned for the adjoining community centre could mean a bigger rink, but it has also sparked fears of gentrification and access to programs offered at the community centre precinct once its redeveloped.

“The reality is that gentrification is happening in that neighbourhood,” says Maura Lawless, executive director of the 519 and a driving force behind the Moss Park redevelopment. “We think that community centres play an extraordinarily important role in the social infrastructure of cities. They’re the places that provide services that mitigate the effects of gentrification.”

Lawless says the redevelopment may see the ice expanded to an Olympic-size surface, but not the hoped-for second ice pad that could see the league expand to allow 14- and 15-year-olds to play.

Dante Scholar, 17, a former player in the league, coaches a team in the afternoon. He also helps teach kindergarten-aged kids to skate. Scholar has been big his entire life and some of the kids barely come up to his knees.

“I just wanted to give back to the league. They always helped me out,” he says.

On a recent Saturday, a few hours after his younger charges have left the ice, Scholar finds some of his players in the lobby, eating hot dogs and taking in the game before theirs.

Scholar wants all his players to be in the dressing room half an hour before game time. With Hodgins’s help, he sends the kids off to join their teammates.

Twenty minutes later, they’re on the ice, imagining that they’re Trevor Daley, or maybe young Leafs star Auston Matthews, even if the odds are stacked against them making it to the big leagues.