“Homophobia cannot be fought with Islamophobia”

Transcribing the speeches from Toronto’s candlelight vigil for victims of the Orlando massacre, I was struck by how much sniffling was caught on my recording.

But it was that kind of event, like the AIDS Vigil came early this year. And much like that annual observance, Sunday evening’s Orlando congregation in Barbara Hall Park offered a space for grief, a platform for wisdom, an affirmation of love, and an outlet for anger.

Smart and beautiful, moving and insightful, it presented a clear-eyed view of our humanity’s intersections — and the need for unity in response to division.

All this was even more impressive given the obviously short timeline during which it was put together by the Toronto Sisters of JOY, The 519, and The Village BIA.

If you couldn’t make it, these are edited and condensed versions of speeches from the event, and they’re worth reading in full:

There are almost no words that we have to say to each other. The most important thing is that we be together.

What I know is that there are people standing here tonight who are being retraumatized because of what has happened. Because of what you have lived in your own lives or we have lived in our own lives. And so please look after yourselves, because there are horrible things that happen in the world, and the worst things are the things that human beings do to each other. And the only way that we can combat that is by loving each other. There is no other way.

What we know is that homophobia cannot be fought with Islamophobia.

The more we love each other, the better off we will be, and the better off the world will be. So what happened in Orlando happened to all of us, and so we have to recognize that.

Someone asked me the other day, “Why Pride?”  Well, because of Orlando. That’s why Pride.

So let’s love each other and go forth. 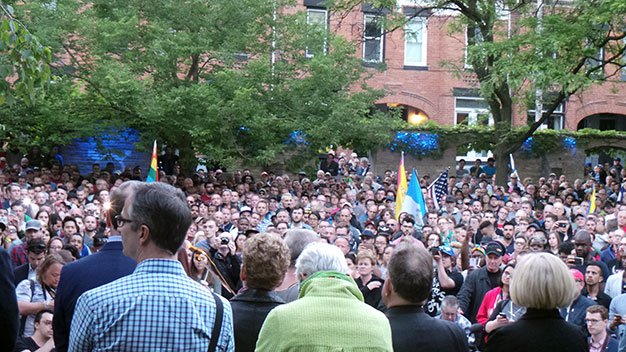 Today as the news unfolded, I was taken back to being 20 years old. I was actually underage for going into a gay bar, into any bar. And I went into the St. Charles Tavern on Yonge Street. And I want to tell you, that first experience — I went in the back door, not the front door.

And last night, over 100 people in Orlando did not have that experience. They went to a place that was meant to be a safe place. A place of fun and joy. A place of encouragement and gathering of a community together on a Saturday night. And it ended in violence as a result of a hateful and terrorist act.

While I heard the news and the numbers of those fatalities kept growing in the morning, my body reacted. And I had two impulses. First, was to reach out to my gay and lesbian friends and to seek solidarity with people who know what it’s like to experience homophobia. Know what it’s like to experience that kind of world that is not always friendly. 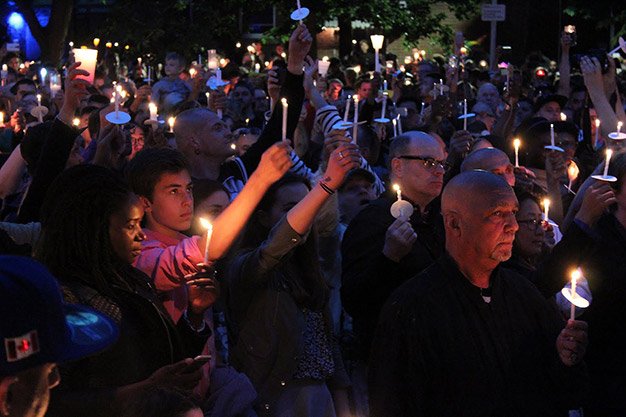 How proud can we be to be in a place where we respond in this way so quickly to something so horrific that happened?

We are going to continue to work here to make sure that these kinds of acts are things that cease to happen around the world. But the more important message that’s going to go out from here today — and I hope it gets all the way to Orlando tonight, and they feel it not just in the LGBTQ community but in all of the City of Orlando and across the United States — is that this kind of hate-filled act has no place in the world. That love can conquer all. And that it must not be placed at the hands of any particular faith or any particular group. This represents no one. This represents no set of values. This represents no faith. It is the act of a deranged individual, and it’s so important to us here, in this city of all places—

A person shouts, “It’s not a mental health issue!”

There is a reason we continue to have Pride — yes, it’s partly celebratory, but it’s also a reminder of how much more we have to do, not just with the LGBTQ community but to make sure that we embrace everybody. That we take the diversity that is Toronto, that makes us great. And that we put into action those values that we talk about all of the time. 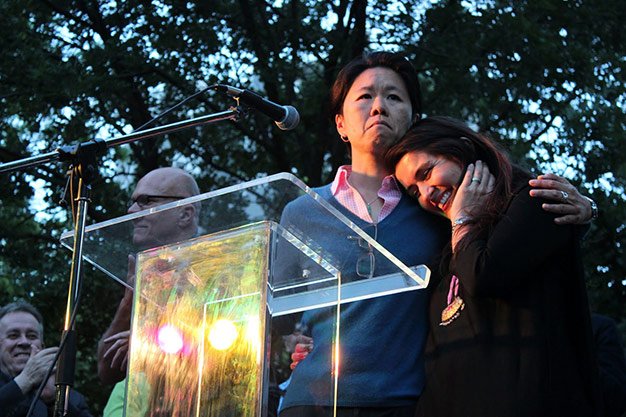 My heart is so heavy. And I know yours is, too.

We have lost so many people, through the years, to hatred, to homophobia, to transphobia. Whether it’s schoolyard bullying or parents who just didn’t understand us, what we always knew we could do was come together. And when we come together, we’re stronger, and we found each other in community. And that’s what happened in Orlando. They found each other in a community. They thought they were safe.

Our social miracle as we know it, in Toronto, in Ontario, in Canada, can never be taken for granted. People from around this great world have gathered in our city. We speak hundreds of languages. We worship the many gods as we choose to call Him or Her. And we do it in relative peace and harmony.

The voices of Toronto’s LGBT community have always shown the way. Whether it’s past the bathhouse raids, or around the violence that we have experienced in the communities, we have always, always come together.

We can never think that what happened in Orlando cannot happen here. And we have to let the people of the Americas know that we stand with them and that violence cannot be tolerated, and we will only ever respond to that type of violence with more love, with a heart that’s so open and wide.

I want to introduce you to someone — Farrah, could you step up? This is Farrah Khan. Farrah  is my queer Muslim fiancée.

We have so much in common with the communities that are marginalized and vulnerable and misunderstood. We have to work harder and build bridges. We can never be bystanders. When we see something, we will speak up. We will take action.

We will never, ever be silent or silenced. 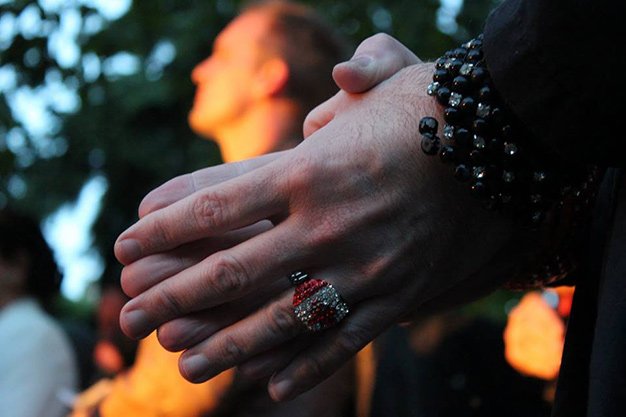 I’ve been following on the internet and saw the hate that’s been coming out. What a joy when I come here and I see all of you.

And I come speaking for the Toronto Unity Mosque, for Universalist Muslims, and for Salaam Queer Muslim Community: We don’t stand with you — we are you.

So I stand with you, as your brother. As your sibling in humanity. And I am given hope by the joy and by the unity, which is not sameness but the celebration of our differences and our diversity.

And when every other speaker before me spoke, and they spoke against Islamophobia and hate towards Muslims, the loudest cheers rang up here and my heart was just filled with love.

And I would like to share with you one line of the Quran, which always heals me. It’s chapter two, verse 115. It says whether you look to the east or to the west, no matter where you look, there is the face of God.

So look around you. Look to your right, and look to your left. There is the face of God. 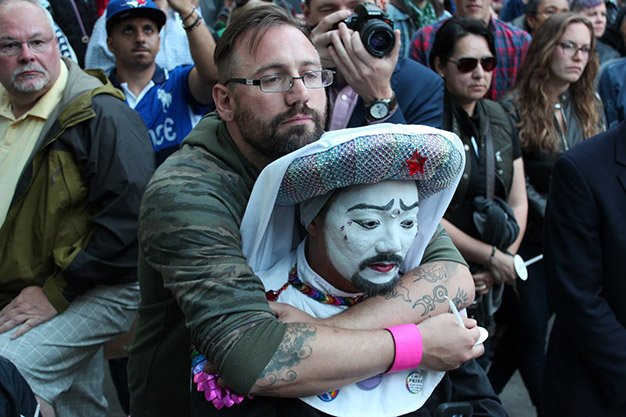 Too often, fear is a part of the LGBT experience. For many of us, we fear coming out. We fear alienation from our friends and our families. We fear violence, which is a reality for far too many in our community.

Earlier this week, Pride Toronto hosted a panel discussion with LGBT elders about the origins of the Pride movement in Toronto. They told us how they fought the fear: they protested, they marched, they organized in basements and spoke out in courtrooms. They built relationships with the black community, with the South Asian community, who are also marginalized.

They reminded us that courage is not the absence of fear but the triumph over it. The Pride movement was born out of resistance, and we will continue to fight and resist.

For 36 years in Toronto, we have come out in the month of June to celebrate who we are. To recognize our courage, our history, and our accomplishments. The tragedy in Orlando reminds us that our progress is fragile. That despite many successes — both at a legislative level and our comfort at being who we are freely in our communities — it is a risk.

This is a tragedy. It is so important that we continue to take up space. That we are visible. That we Show. Our. Pride!

Allies and supporters, now more than ever, I ask you to stand with us: to stand against the beliefs that make homophobia, transphobia, racism, Islamophobia, misogyny, and any other form of violence possible. Together, we will triumph over the hatred that exists in our society. 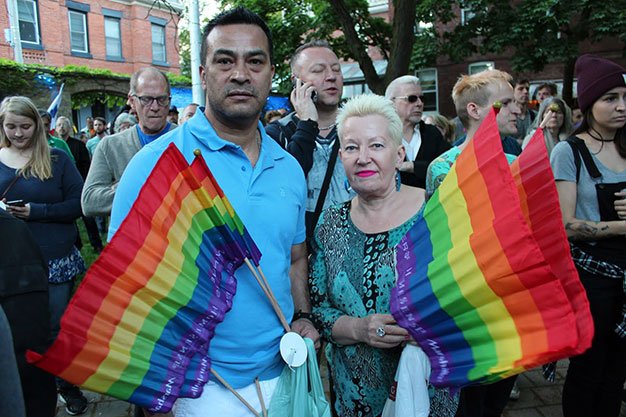 My name is David Garcia, and I’m proud to be Latino.

We are part of this rich diversity that Canada is showing to the world. Canada is a role model in the world. But there’s much work to do. We have to keep fighting for LGBT rights all over the world.

Hundreds of people from Latin American countries came to this country trying for a new opportunity to live with dignity. 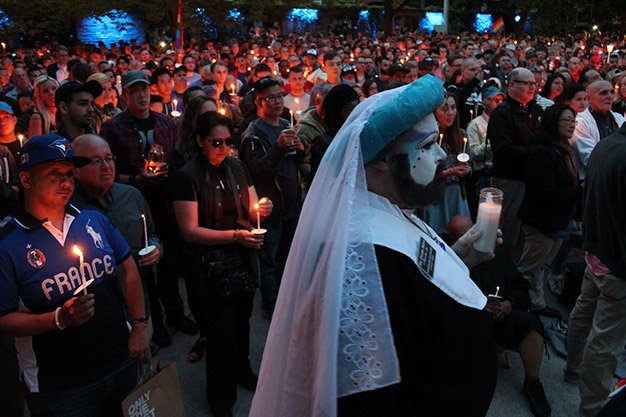 So what do we do with all this grief? Well, let’s take a look at what we’ve done with our grief.

We’ve continued to come out in greater numbers, even when it’s been a greater risk. We’ve organized ourselves to provide support for those with addictions and mental illnesses. We’ve organized our own churches, our own synagogues, and our own mosques, while we encourage others to change. We’ve started our own AIDS organizations before politicians would even say the word “AIDS.”

And we have insisted on holding our hands in public, greeting our partners with a kiss, marching in Pride parades all around the world, from Toronto to Tel Aviv to Kyiv. And we have continued to fight for the right to work and the right to marry.

The scriptures that I follow also say to be angry but sin not. So we must be appropriately angry. Angry when extremists of one religion try to distort all of that religion. And I remind you that no religion is the enemy. It is extremism and fundamentalism that we struggle against.

And let us not forget that most of the attacks that we have felt in North America have come from Christian extremists and Christian fundamentalists.

We must be angry at politicians who fail to pass gun control laws. No one should be able to own an assault weapon or a handgun.

And we should be angry at religious leaders who use writings from long ago to fuel hatred today.

May this tragedy remind us that life is fragile. So live openly. Love deeply. Grieve our losses. And in the memory of those who died in Orlando, may we be more determined to make our world a better place for those who will come after us, so that hate does not have the last word.

And may the way that we live our lives be our prayer.