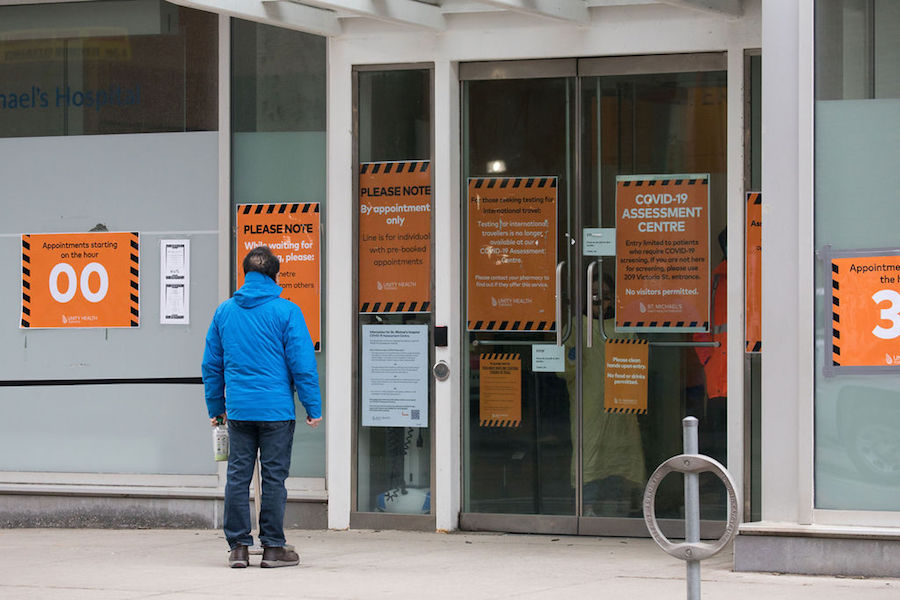 Shame and blame will not save you from COVID-19

Ford to Biden: Give Ontario a million vaccine doses

The vaccine is manufactured in Kalamazoo, Michigan, but Canada is scaling back immunization plans due to a production delay with the pharmaceutical giant in Europe. The issue means Ontario will get 80 per cent less doses than originally expected over the next four weeks.

“We’re your third largest trading partner,” he said. “We’re the number one customer to 19 states that elected you, Mr. President. And nine other states that were number two. The least thing you could do… give us a million vaccines. You have a hundred million down there. Give your great neigbhour, that stands shoulder-to-shoulder with you.. a million vaccines to get us over the hump.”

“Due to further COVID-19 vaccine supply shortages announced by the Government of Canada today, the Province of Ontario has directed the City of Toronto to immediately pause its proof-of-concept Immunization Clinic at the Metro Toronto Convention Centre at the conclusion of today’s appointments,” the city said in a statement on Tuesday evening.

Ontario originally directed the clinic to “pause” on January 22 due a shortage of vaccines from pharmaceutical giant Pfizer. Earlier in the day, Ottawa announced Canada would receive zero vaccines next week as a result of production delays in Europe.

Shipments are expected to ramp back up in early February, but at 50 per cent of the amount Canada was expecting over the last two weeks of January and first two weeks of February.

Pfizer has promised to deliver four million doses to Canada by the end of March as originally planned.

Ontario completes vaccinations in 40 per cent of LTC homes

1:05 pm Ontario has completed the first round vaccinations in long-term care homes in hot spots Toronto, Peel, York and Windsor-Essex, as well as in Ottawa, Durham and Simcoe Muskoka, Premier Doug Ford said on Tuesday.

However, Ontario will not receive Pfizer-BioNTech COVID-19 vaccines next week due to a delay with pharmaceutical giant Pfizer.

During a press briefing in Ottawa today, Maj.-Gen. Dany Fortin, who is leading the Public Health Agency of Canada’s vaccine rollout plan, said that Pfizer was suspending shipments to Canada entirely for the week of January 25.

Last week, the federal government announced Pfizer was reducing shipments to Canada in order to increase production in Europe.

Pfizer has promised to deliver four million doses to Canada by the end of March despite the delays.

As of January 19 at noon, over 226,000 COVID-19 vaccine doses have been administered across Ontario.

Today’s case count excludes an undetermined number of cases from Toronto Public Health due to a technical issue.

“Locally, there are 550 new cases in Toronto, 346 in Peel and 235 in York Region,” Health Minister Christine Elliott said on Twitter.

The province reported 2,873 resolved cases, outpacing the number of new infections for the second consecutive day.

However, labs completed only 34,531 tests in the past 24 hours, the lowest daily testing rate since December 29. The testing positivity rate is 5.5 per cent.

Active cases in the province dropped by over 1,000 since yesterday to 27,615. Hospitalizations jumped by more than 50 to 1,626, including 400 patients in intensive care. Of those patients, 292 are on ventilators.

Long-term care residents account for 20 of the deaths reported today. Long-term care homes with outbreaks are up six from yesterday to 254 out of a total of 626 homes.

10:50 am The city has received around 1,950 complaints from apartment and condo residents about neighbours violating mandatory mask rules.

“I’ve asked the staff to drill down into the complains we’ve received about masks and face coverings not being worn in apartments and condos,” Mayor John Tory said during a press briefing at city hall on Monday.

Tory said the bylaw directs building owners or operators to have a mask policy and to post corresponding signage.

City staff will look at the complaints to determine where the mask violations are happening in order to work with the problematic properties. This may mean city staffers spending time in apartment lobbies to educate residents.

There around 3,500 residential apartment buildings in Toronto. That number does not include condos.

10:10 am Nearly two-thirds of Canadians say they would support a curfew to help curb the spread of COVID-19, even though they are not sure it’s effective.

According to a Leger and the Association for Canadian Studies poll, 65 per cent of respondents said they would support a curfew.

And in Ontario where Premier Doug Ford has said he is against curfews, 62 per cent said they would back a nightly curfew.

However, only 39 per cent of Canadians believe a curfew would be an effective way to reduce virus spread and 41 per cent said they think it would be ineffective.

In Ontario, 36 per cent of respondents said a curfew would be effective and 45 per cent said it would not be effective.

Earlier this month, Quebec became the first Canadian jurisdiction to impose a nightly curfew as part of its pandemic response.

The curfew took effect on January 10 and will last for one month. The Leger poll found 74 per cent of people in Quebec support the move.

The proportion of Canadians who say their mental health is “excellent/very good” since the pandemic started is 32 per cent, a 10-point decline since last April.

Twenty-one per cent said their mental health is bad or very bad, up by eight points since April.