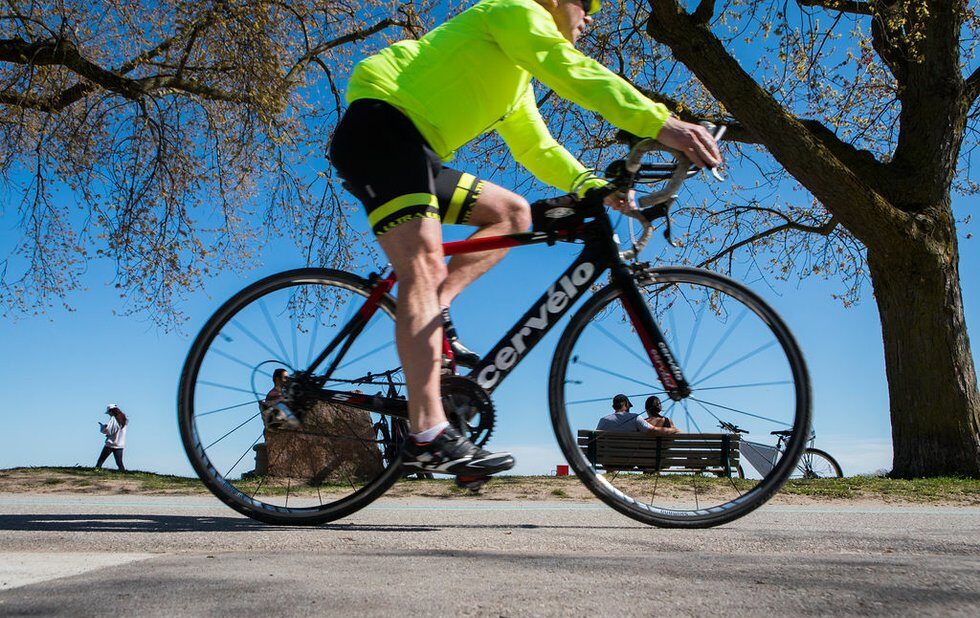 The city is bringing in a third-party investigator to look into allegations of anti-Black racism against a bylaw officer.

Deborah Ampong and Eva Amo-Mensah told CBC News that they were stopped by a bylaw officer while leaving a field in Etobicoke’s Centennial Park on Tuesday.

The pair said they were exercising and realized the gate to the field was locked. They said they hopped a fence as others were leaving the field but that the officer did not stop non-racialized people.

Ampong told CBC that the officer said: “Did you know that you two are trespassing, and that if this were my home I’d be licensed to shoot you both?”

The women recorded a heated exchange that ensued and posted the video on Instagram. The clip has thousands of views.

During a press conference at city hall on Wednesday, Tory confirmed that the bylaw officer is still employed by the city.

“These are deeply concerning allegations and I think it is very important that when you have a deeply concerning like that you do everything you can the public is satisfied you’re having an objective, independent investigation,” Tory said.

In preparation for Toronto moving to stage two, the city has released guidance documents for local businesses. Measures staff and customers wearing cloth masks when physical distancing is not possible and establishments keeping a log of staff and customers with check-in times and contact information for public health contact-tracing purposes.

Medical Officer of Health Eileen de Villa said the city’s status is “yellow” but the four indicators TPH is using to gauge progress in curbing COVID-19 spread are moving int the right direction.

The city has released data on the number of pedestrians, runners and cyclists making use of the road closures as part of the ActiveTO program.

The program shuts 10 kilometres of roads across the city to allow people to get outside on weekends and exercise while practising physical distancing.

City staff collected and verified data from Saturday, May 23 and Sunday, May 24, the first weekend that Lake Shore West and East and Bayview closures took place.

Below are the peak counts from May 23. The numbers for both Lake Shore West and East include the roadway closure, as well as the adjacent Martin Goodman Trail and/or boardwalk:

On May 24, the counts were slightly lower and came in about 75 per cent of Saturday counts.

TO Live has laid off 32 more people, citing uncertainty caused by COVID-19 and an 85 per cent drop in revenue.

In a press release, the non-profit and city agency that operates Meridian Hall (formerly Sony Centre), St. Lawrence Centre for the Arts and the Meridian Arts Centre said a total of 115 full-time staff have been laid off in addition to 480 unionized, part-time and casual staff who were already laid off or placed on emergency temporary leave.

“It is a difficult time for the organization and for live events in the city,” said Clyde Wagner, TO Live’s president and CEO, in a statement. “The entire sector has been ravaged by COVID-19 and TO Live is no exception. A full 85 per cent of our revenue is self-generated, mostly through ticket sales, which means that we lost most of our income when the state of emergency was declared and shows were suspended.”

As city agency, TO Live does not qualify for federal aid programs.

“We have worked hard to bring the organization’s expenses down to the bare minimum, but there are ongoing fixed expenses with the buildings that cannot be avoided,” added Wagner. “We have held off on making additional reductions for as long as possible, but with no clear date for resuming shows on the horizon we must take this additional step.”

The remaining 30 staff will take a 20 per cent reduction in pay and work on long-term planning, box office ticketing, venue maintenance, and venue booking on a reduced work week of four days, the agency said.

The Redpath Waterfront Festival has cancelled the return of the World’s Largest Rubber Duck.

The festival was originally scheduled to take place this weekend but was postponed to September due to the coronavirus pandemic.

“With the overwhelming success of Mama Duck’s visit in 2017, and the large crowds that flocked to the waterfront, we believe the time is still not right to bring her back,” the festival said in an Instagram post. “We continue to work on ideas to celebrate our 10th Anniversary, in a socially distant manner, so please check back for more information. We will also continue to share content on our social channels from the waterfront community and our partners.”

Ontario has reported fewer than 200 new COVID-19 cases for the fourth consecutive day.

Provincial public health officials have confirmed 190 new cases, bringing the total to 32,744. Of those cases, 27,784 are considered resolved, up 353 since yesterday. Another 12 people have died. To date, the virus has killed 2,550 people in Ontario.

“Today’s increase in resolved continues a more than week-long trend of daily decreases in the number of active cases, with 1,408 fewer active cases since last Tuesday,” Health Minister Christine Elliott said in a tweet. “Hospitalizations, ICU admissions and vented patients also all continue to decline.”

She added that 29 of Ontario’s 34 public health units reported five or fewer cases, with 19 of them reporting no new cases at all. She said that 154 of today’s 190 new cases – 81% – were from Toronto, Peel and Windsor, the three regions remaining in stage one.

In terms of testing, 24,205 tests were completed since yesterday. There are 21,635 cases under investigation.

11:13 am Trudeau to present economic update next month

Prime Minister Justin Trudeau said today that his government will provide a fiscal and economic update in the House of Commons on July 8.

The federal government cancelled plans to present a budget in March at the onset of the coronavirus pandemic. Since then, Trudeau has resisted opposition calls to detail the crisis’ impact on the Canadian economy, arguing that the situation is too unpredictable to create a complete picture of the country’s financial health.

The “snapshot” will give Canadians an idea of state of the economy, how our response to the pandemic compares with other countries and what we can expect in future, the PM said.

The province has extended emergency orders to June 30. The orders, which include restrictions on social gatherings, were due to expire on June 19.

The government said all emergency orders will remain in place until the end of the month, but each one will be reviewed on an ongoing, case-by-case basis to determine if they can  be adjusted or lifted.

Last week, the majority of the province moved into stage two of Ontario’s reopening plan. Many businesses were able to reopen, including hair salons, restaurant patios and museums. Only three public health units – Toronto, Peel and Windsor-Essex – will remain in stage one.

Across the province, limitations on gatherings were eased from five to 10 people and visits to long-term care homes will resume by the end of the week with restrictions in place.

“Extending these emergency orders gives our frontline health care providers the necessary flexibility to rapidly respond to urgent needs and protect our most vulnerable,” Premier Doug Ford said in a statement. “Even though we’re seeing decreasing infection rates with increased testing levels, we can’t let our guard down just yet.

Ontario first declared a state of emergency in response to the coronavirus pandemic on March 17. The legislation has since been renewed and allows the government to enact and enforce emergency orders.