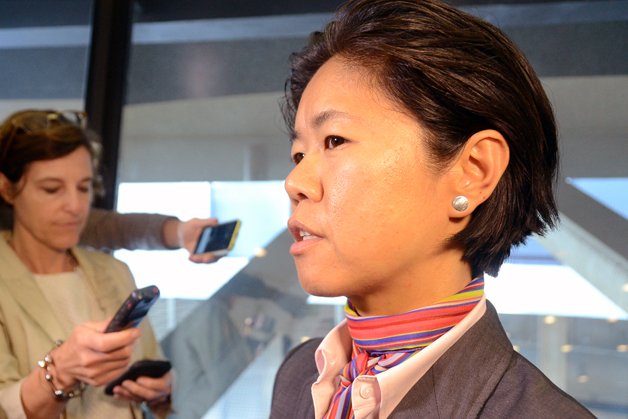 Toronto councillor Kristyn Wong-Tam says she will not be seeking to extend her tenure as vice-chair of the Board of Health when her term expires on December 1, although she has expressed an interest in continuing as a general member of the Board.

The announcement in a statement released Monday follows a backlash over statements made by Wong-Tam on the city’s policy on mandatory vaccines. The downtown councillor weighed in on the thorny subject in an op-ed published in the Toronto Sun last week.

She says her intention was to “promote discourse over divisiveness and dial down the polarization” on the issue. Her article mentioned her elderly parents’ initial reluctance to get vaccinated.

But Wong-Tam stirred a social media storm with her suggestion that the vaccinated are “just as likely” to spread COVID-19 as the non-vaccinated. It was an uncharacteristic statement coming from Wong-Tam who has otherwise been a strong advocate for vaccination.

She took to Twitter later to clarify that she “was not offering any medical advice” and apologized “if this caused any confusion or upset.” But she otherwise stuck to her guns, proffering as evidence for her vaccine claim a memo from Ontario’s chief medical officer of health Kieran Moore sent to regional medical officers of health on the Delta variant back in August. It proved to be the more egregious error for Wong-Tam.

In the memo, Moore states that the infectiousness of vaccinated and non-vaccinated people are “similar.” But that information was outdated.

Wong-Tam’s critics also pointed out that she omitted to mention in her defence that Moore was speaking in his memo about circumstances “when breakthrough cases occur.”

Wong-Tam said in her statement released Monday that that was “an honest mistake,” and clarified that “the memo is outdated and the context in which I shared it was misleading and left the wrong impression.”

For the record, Wong-Tam is vaccinated. The science is also clear: if you’re vaccinated, your chances of catching or spreading the virus are significantly lower than if you’re not vaccinated.

But on mandatory vaccines, Wong-Tam says she’s still “conflicted” because of the stress on public services. She’s also concerned about “BIPOC communities [who] are broadly represented in those who are unvaccinated.”

Wong-Tam’s view exposes a growing rift on the left as public service employees who refuse to get the jab now face the prospect of losing their job.

Wong-Tam suggested in her op-ed that regular testing may be preferable to firing workers who fail to abide by vaccine mandates. Ontario NDP leader Andrea Horwath suggested the same thing a few weeks back before quickly backtracking.

There are many good reasons for requiring vaccines of those in the public service, health and safety being chief among them. Making vaccines mandatory for government and city employees has also created the unintended consequence of labour shortages and cuts to public services.

Last week, the Toronto Transit Commission (TTC) announced service cuts after placing workers who have refused to disclose their vaccine status on unpaid leave. They have until December 31 to be vaccinated or risk being fired.

The public transit provider is not saying how many of its 15,000-plus employees are affected by the mandate, but it’s likely in the hundreds.

More than 500 City of Toronto employees who failed to comply with vaccine mandates were also placed on unpaid administrative leave last week, causing a number of recreation programs to be cancelled. The city says that it does not anticipate vaccine mandates to affect “critical and priority services,” like police, fire and paramedics.

At the Toronto District School Board, meanwhile, some 330 staff members out of some 41,600 staff who declined to reveal their vaccine status were placed on administrative leave this week. Some 290 others have been deemed to have legitimate vaccine exemptions.

The numbers are, comparatively speaking, small which would seem to bolster Wong-Tam’s argument that testing may be an option to consider for those who have legitimate concerns about vaccines but don’t qualify for exemptions. On the flip side, the small numbers also suggest that vaccine mandates work, says Board of Health chair Joe Cressy. Cressy was involved in the behind-the-scenes discussions that ultimately led to Wong-Tam’s decision to step aside.

In an interview with NOW, Cressy commended Wong-Tam’s efforts as a member of the Board, in particular on equity issues related to COVID-19, but says he supports her decision to apologize and not to extend her term.

He says that while “there’s room for disagreement” on the need to tone down the rhetoric on vaccines, “there is no room for misinformation.”

Cressy says the City has expended a great deal of energy building confidence in vaccines and breaking down barriers in vaccine reluctant communities. He says the City not only has a responsibility to protect its workers, it also has a “collective responsibility” to protect the most vulnerable communities and vaccines have proven to be the most effective way to do that.

And that’s where Wong-Tam’s comments proved unhelpful – and at a crucial time when the City is about to roll out the largest youth vaccination drive in its history following the approval of COVID vaccines for 5 to 11-year-olds.