ONCE AND FOR ALL WE'RE GONNA TELL YOU WHO WE ARE SO SHUT UP AND LISTEN by Alexander Devriendt, Joeri. 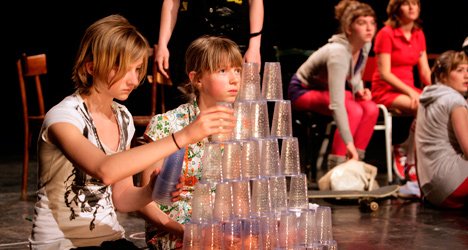 Quite a few Belgian teens are talking here.

ONCE AND FOR ALL WE’RE GONNA TELL YOU WHO WE ARE SO SHUT UP AND LISTEN by Alexander Devriendt, Joeri Smet and the company, directed by Devriendt (Ontroerend Goed & Kopergietery & Richard Jordan Productions/Harbourfront’s World Stage). At the Enwave Theatre (231 Queens Quay West). Through Saturday (February 20), 8 pm. $30. 416-973-4000. See listing. Rating: NNN

Want to have an inside view of teens? Check out the long-titled Once and For All We’re Gonna Tell You Who We Are So Shut Up and Listen, featuring 13 Belgian teens who’ve been touring the show internationally for several years.[rssbreak]

It’s a brisk, often intense 55 minutes of theatre, with some fascinating, thoughtful insights and a lot of onstage partying.

One of the points of the show is that the adult view of adolescence is a cliche, one that older people create for themselves and impose on younger people. In Once and for all, we hear and see what teens think and do, without grown-up controls.

If you saw last season’s That Night Follows Day, another World Stage presentation and one that tracked, using young performers, the inner lives of pre-teens, you might think of this current show as a continuation of the growing-up story.

The first scene, in which company members enter and sit on 13 chairs as different as the teems themselves, is repeated several times, as if to prompt us to watch the action differently. You could, in fact, see the production several times and still not catch all the interactions among the 13. They skate, play with dolls, thwack each other with deflated balloons, make out, break up and have water fights.

Then we see a parodic opera/ballet scene, followed by another that feels like an increasingly chaotic, highly kinetic, loud free-for-all. The performers seem a lot more comfortable in the latter.

There are a number of striking moments in the show, often when the cast confronts the audience verbally or just by staring at us, acknowledging our presence and asking us to watch them.

Another has the four men in the troupe alone onstage after an interrupted make-out session involving the whole cast. At a loss for what to do, the guys start inventing activities the hilarious result is a look at male energy not knowing where to direct itself.

One big plus is the naturalness of the performers. We never have a sense that they’re acting or speaking lines.

It’s as if we’re given a look into their minds and feelings, and one figure, likely speaking for them all, tells us quite frankly “let me be…I have to go too far. It’s all been done before, but not by me, not now.”