The unsanctioned safe injection site housed for nine months in a tent at Moss Park gets some much-needed funding and a permanent space indoors, but without decriminalization of hard drugs activists say the opioid crisis can't be beaten 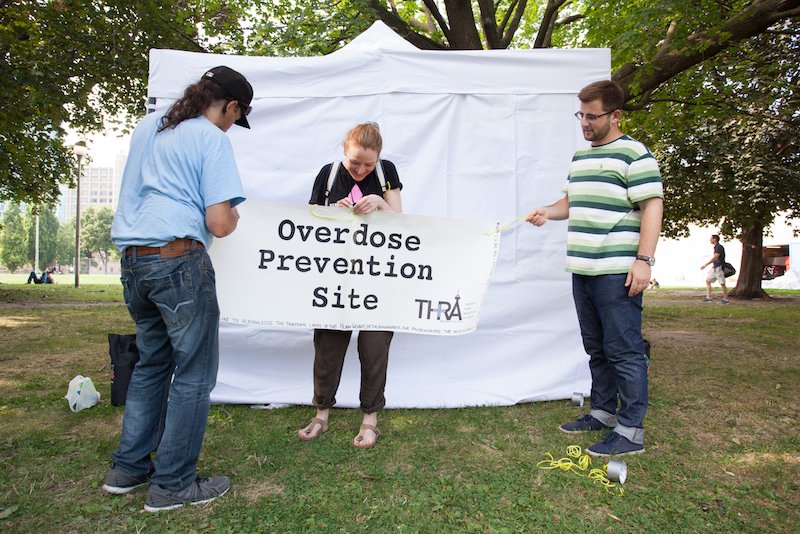 On May 11, almost nine months after they opened in a tent in Moss Park, volunteers at the overdose prevention site (OPS) announced that they had received a federal exemption to operate legally. Along with that announcement came six months’ funding and a new indoor facility set to open in early June in a repurposed art gallery a few blocks away. The funding will provide not only a permanent home, but jobs and, what volunteers seem to be most excited about after a cold winter, plumbing.

Councillor Joe Cressy, chair of the Toronto Drug Strategy, commended the Moss Park volunteers, calling them “courageous activists” who stepped into a “flawed system” to save lives and helped change provincial and federal policy on safe injection sites.

As a result, the resistance towards safe injection sites is changing at City Hall, says Cressy. It used to be that he would be asked whether the sites were really necessary, now he’s asked why they can’t be opened sooner.

“That’s a reflection of the recognition that the overdose crisis is killing people and these are preventable deaths if we act.”

The Moss Park announcement gives Toronto a third provincially-sanctioned Overdose Prevention Site. Two more have been approved, which will put the total at five when they’re opened.

The unsanctioned OPS in Moss Park, set up by the Toronto Overdose Prevention Society (TOPS) and the Toronto Harm Reduction Alliance (THRA), opened last August, amid the city’s worst overdose crisis which saw 187 overdose deaths between May and October of 2017 in Toronto, more than double the 87 during the same period in 2016.

“We were so desperate and so hurt,” says Peter Leslie, a harm reduction worker who’s been a volunteer at the site since the beginning. “We needed to open right away.”

Before his own battle with drug use, Leslie was a paramedic. He says his time on the streets opened his eyes to the realities that many marginalized communities face. “I couldn’t understand why all these people were homeless. That’s not taught in school.”

Leslie says the experience has transformed his views. Harm reduction, he says, is more than just about helping to make sure people inject safely. It’s also about removing the stigma and shame associated with drug use, “to let people know that they can take control… with the support and education.”

The Moss Park OPS began as a symbol of anguish and frustration – and lack of government support – caused by the ongoing crisis. Over time, it became emblematic of the resolve of volunteers who showed up early every day to set up the tent and stayed late after their shifts to pack it up again. It blew over in wind storms, and had no power and no running water.

Establishment of the site became a polarizing issue: to supporters it marked a powerful step in defying unjust drug policies. For detractors, it was an unsightly hub for undesirables.

In late November, ahead of winter’s plummeting temperatures, the province’s largest union, the Canadian Union of Public Employees (CUPE) Ontario, donated a heated trailer “in the absence of government leadership.”

Volunteers endured record-breaking temperatures throughout the winter. Through it all, no one died while using the site.

“Rain, snow, Christmas, New Year’s, media, police,” says Sarah Ovens, a social worker and one of the coordinators at the site, “whatever obstacles we were facing people have just kept showing up here and saying, ‘We’re going to figure it out together.’”

Many of the volunteers who staff the site began as users, slowly making the transition into integral parts the operation. They attended court for community members and wrote letters of support to people in prison. They raised money – over $100,000 – to continue their efforts, worked tens of thousands of hours and reversed hundreds of overdoses. All of the volunteers were named CBC Metro Morning’s Torontonians of the year.

Zoë Dodd, a driving force behind the Moss Park effort, never imagined she would be in a room full of police chiefs talking about the drug war and its associated trauma when it all began. Yet, on May 16, that’s exactly where she found herself. On the heels of the Moss Park funding announcement, the Ontario Association of Chiefs of Police (OACP) held a two-day conference on the overdose crisis. Just as perspectives at City Hall seem to be changing, so too are those of the leaders in policing.

“There were police officers there who were also feeling the challenges of the overdose crisis in their work,” says Dodd, “but also questioning the drug laws and the criminalization of people using drugs.”

The conference, which took place on May 16-17 in Richmond Hill, covered a number of areas, including, drug policies in other jurisdictions, harm reduction and enforcement initiatives and the Good Samaritan Act. Speakers came from a number of backgrounds – doctors, frontline harm reduction workers and drug users.

Chief Bryan Larkin of the Waterloo Regional Police Service, who serves as president of the OACP, says the magnitude and complexity of the opioid crisis spurred the need for the conference. And while harm reduction and safe injection sites are still polarizing issues in the policing community, Larkin says the conference helped facilitate important dialogue between groups that are often at odds on the issue.

Says Larkin: “We’ve never subscribed to the belief that we can arrest our way out of the opioid crisis.”

At the same time, the policy moving forward may be to put even more emphasis on going after drug traffickers, says Larkin. Canada already has mandatory minimums for trafficking, producing or importing drugs. Courts have also convicted dealers of manslaughter charges. Recently, police forces across the country have been applying the charge increasingly to dealers alleged to have sold drugs tainted with fentanyl.

But stricter enforcement would be a mistake, says Dodd.

Dodd has seen the effects of criminalization first-hand: children taken away their homes, homelessness and prison. “If anything, [police] need to take the brunt of the blame of why we’re in an overdose crisis.”

Decriminalization was one focus of discussion at the conference, which looked at different approaches, like Portugal’s decriminalization of illicit drug use and the resulting decrease in overdose deaths – Portugal had 5.8 overdose deaths per million in 2015, according to a 2017 report by the European Monitoring Centre for Drugs and Drug Addiction. Preliminary numbers put Canada at 106 opioid-related deaths per million in 2017.

Natalie Kallio, who runs the safe injection site at South Riverdale, also spoke at the OACP conference. She says that it was encouraging to see an interest on the issue of harm reduction among Ontario’s top cops. But, she says that increased enforcement on the street-level dealer is not the answer. She says that when police make a big bust it can actually have an adverse effect on the kind of drugs that end up in users’ hands as dealers end up cutting more of their supply with potentially deadly ingredients, like fentanyl. “We know that it’s just going to make the shit on the streets that much worse.”

The idea that removing some of the supply makes drugs more dangerous also has backing in research and advocates pushing decriminalization. Kenneth Tupper, a director at the BC Centre on Substance Use, was the principal investigator of a recently published drug checking study in Vancouver. The study found that 88 per cent of opioids tested positive for fentanyl.

Researchers in Toronto are currently working on a similar project. Dan Werb is leading a study with St. Michael’s Hospital, the Centre for Addiction and Mental Health and three of the frontline safe injection sites.

The goal is to provide users with detailed information on the breakdown of their drugs. Knowing a particular supply’s composition will allow researchers to tailor advice to individual users on how to use safely. The fentanyl testing strips currently available are limited – they can tell someone if there is fentanyl, but not how much or what else might be in their supply. Werb hopes to have the project launched before the end of the year.

Werb doesn’t want to be an alarmist, but he says that the situation in Toronto is “pretty scary. Toronto’s opioid supply is getting more potent, more toxic.”

Without regulation, the market will remain under the control suppliers at the top, who favour efficiency and profitability, over safety. And in the illicit drug trade, potency is synonymous with efficiency. And, increasingly, that means using stronger and more dangerous drugs.

“Until we create structural change… this is the new normal, for now, and it’s up to us to find new ways to deal with it,” says Werb.

Bad drugs are a conversation that keeps coming up among Moss Park volunteers. Ovens say the battle is far from over.

“There’s still a lot to do and decriminalization is what we’re ultimately fighting for,” says Ovens. “I guess we can turn our attention to that next.”