I’ve known Progressive Conservative Party of Ontario leader Patrick Brown for many years. He was a regular guest on my old TV show when he was a federal MP.

I never got the impression that he was especially concerned with sex education or gay issues. If anything, he struck me as more liberal than conservative on social policy.

Indeed, he posted the following on my Facebook page in response to my column in these pages last week on Conservative Christians and their crusade against LGBTQ rights abroad: “Great article Michael Coren… [it’s] a powerful reminder we need to do more internationally to combat homophobia.”

Which is why he was incredibly frustrated and surprised, he told me last weekend, when he came back from cottage country to discover the mess he was in.

It’s not been a good week for Brown. In the space of a few days, doubt has been cast on the rebranding of the PC Party as more progressive on social issues that he’s undertaken since his election as leader last year. A vital by-election in Scarborough-Rouge River happens on Thursday (September 1).

The controversy is over the new Ontario sex education curriculum, which has led some parents to remove their children from school and provoked hysteria in social conservatives and right-wing Christian leaders over, among other things, the teaching of different sexual identities.

Last weekend, a letter sent to Scarborough-Rouge River constituents in which Brown said he would scrap the new sex-ed curriculum if he comes to power was made public.

Sex education is an issue that Raymond Cho, the PC candidate in Scarborough-Rouge River, has been emphasizing throughout the campaign in a riding where a large majority of voters are Muslim, Catholic, Hindu and Chinese. “All these parents are quite concerned about this issue,” says Cho.

Brown has flip-flopped on it.

In the lead-up to the PC leadership vote in 2015, he made the right noises about the Liberals’ curriculum changes to win the support of social conservatives in the PC caucus as well as the backing of rival candidate Monte McNaughton. He showed up at Queen’s Park alongside some of the most vociferous opponents of the curriculum. People waved signs reading, “What’s next? Safe animal sex?” among other not-so-choice slogans.

“It’s fantastic to see so many people out today to express our collective concern for the well-being of our children and the importance of our families,” Brown said then.

Once elected leader, however, he backpedalled. He said the province indeed needed a new curriculum, reached out to the LGBTQ community and marched at Pride. 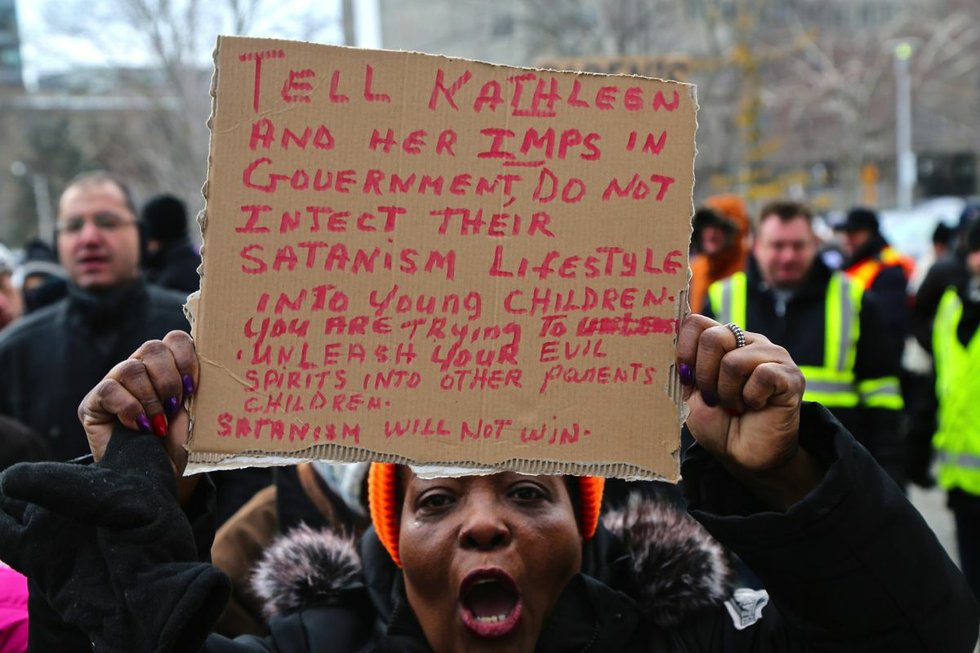 Then came the letter, then confusion, then an apologia in the August 29 Toronto Star attempting damage control, in which he wrote that it was “a mistake” for a letter to go out to constituents saying he would ditch the curriculum.

“This is not my view. This is not what I will do. In fact, the opposite is true. I apologize. I strongly support an updated curriculum that takes into account changing attitudes and the world in which children now dwell. They are being asked to understand challenging topics in ways their parents were not. It is important to have sex education to combat homophobia, and raise important issues like consent, mental health, bullying, and gender identity. The world has changed and so should the curriculum.”

So where did the letter come from? There are two possibilities.

The first is that Brown approved of it, assuming it would carry the by-election, but then realized how damaging this would be in most of the province.

The second theory making the rounds in party circles is that social conservative elements, irresponsible party support staff or someone working directly for Cho proceeded without authority.

The truth is that the hard right and religious-based groups in the party feel exploited and ignored and are intensely angry. Hell hath no fury like a fundamentalist scorned. They have lost virtually every battle but believe that a coalition of right-wing Catholics and evangelicals, ethnic Christians, Muslims and some in the Sikh community can make the Tories bend the knee. Since their thrashing over the faith school funding proposal (forced on John Tory by Mike Harris-era cabinet minister Frank Klees), they have been in the wilderness. They thought, and still think, the sex-ed debate can restore their influence.

One of their most vocal, if clownish, leaders is Charles McVety, president of Canada Christian College, who issued a letter to his not insubstantial base on the Brown controversy saying the PC leader should resign.

“It is always sad to see a politician be deceitful, but it is especially troubling when he is so brazen that he will flip three times on the same issue,” he wrote. “We have been used, deceived and betrayed. For the sake of our children Patrick Brown must step down and allow a principled, trustworthy person to lead the party.”

The equally flamboyant LifeSite News, appealing to a Catholic rather than evangelical constituency, said much the same thing.

But social conservatives are increasingly irrelevant within the Ontario Tory party.

White Christian right-wing zealots are trying to mobilize Muslims and Chinese Christians, and while there have been some divisions within a few schools over the sex-ed curriculum, it is in fact an entirely mainstream, sensible and long-overdue document that has nothing to do with any radical gay agenda or conspiracy. It is here to stay. Whether the same can be said of Patrick Brown is another question, but all things considered, I imagine he will survive. Mind you, some heads will roll, and frankly, they deserve to.