The real eco-crunch is caused by livestock, not more babies 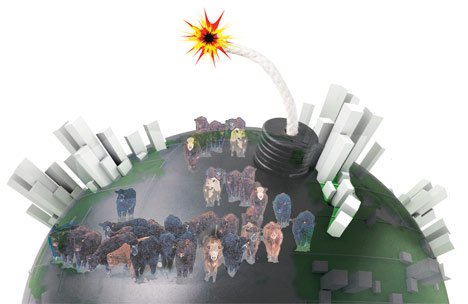 Any number multiplied by 27 billion will be fairly big, so the prospects of coming up with three meals a day for 9 billion humans on the planet some 40 years from now has some people worried.

The worrying went mainstream during 2007 when a sudden hike in grocery prices fomented food riots in over 40 countries, and many saw this as an omen of a resource-crunched future.

But when global recession put a lid on food prices, the billion people left hungry by recession didn’t make news.

Some among those still worrying about resource and population crunches met at a two-day conference at the University of Toronto this past weekend sponsored by two esteemed peace groups of a scientific and progressive hue, Pugwash and Science for Peace.

To my pleasant surprise, the opening session was not a rehash of the old-time population bomb harangues associated with what used to be called the “population control” movement.

Since 1994, when a United Nations conference repositioned population as a human rights, women’s equality and environmental protection issue, it’s ceased to be a numbers game.

Susan McDaniel, an expert in demography from the University of Lethbridge in Alberta, made sure the hundred people at the opening session knew that population theories had come a long way, baby.

Numbers alone can’t be blamed for many problems, she says. Countries with low populations, such as Canada, still face pollution and hunger, for example, while typhoons, drought and other calamities strike countries without checking their population statistics.

McDaniel stressed that the best contraceptives against population growth are not condoms, but “the education and empowerment of women” – goals that don’t receive resources from population programs sponsored by wealthy nations.

For someone like me who’s new to population issues, the most startling speaker was Robert Hoffman, president of whatIf? Technologies, a consulting company that specializes in crunching numbers and turning them into graphs for major corporations and government departments.

The big problem is not with the sheer population growth numbers, Hoffman’s slides showed. Moderate UN estimates show a trend line that doesn’t level off until 2050, when the world will be home to 9 billion people. Though that’s almost a 50 per cent increase in population and demand for food and other resources, that’s not the half of it.

The big story in population trends relates to the coming bulge in the number of old people (I’m trying not to be offensive) taking up prime pasture.

This is a problem that gets worse for the simple reason that the ratio of seniors to working-age people doubles by 2050.

By the time world population numbers level off, there will be so many seniors that each working-age person will have to carry the equivalent of two-thirds of a person on top of their productive selves.

To make matters worse, that jump in demands for increased personal productivity will coincide with an inevitable decline in factors that produce productivity, especially around food.

Just as people had their eye on the wrong ball when they followed fertility rates rather than age distribution, ag and food experts tracked productivity of plants rather than land – a little bit of hubris that comes from thinking that human ingenuity and tinkering, such as genetic engineering, can get us out of pure reliance on nature and land.

The problem is that high-quality land is going to suburban sprawl and fuel crops, medium quality drylands are being lost to drought (think Australia and the North American prairies), while low-quality land from former rainforests is expanding.

Land quality dictates that yields will go down sharply by 2020. That’s a deadline no one’s thinking about as we sleepwalk toward the missing-in-action event known as Copenhagen next month. The long and short of it?

“We have to do other things besides reduce population,” says Hoffman.

We have to stop sprawl over prime land as of today, he says, and stop using crops for car fuel.

We also need to stop factory-farmed livestock, because grain-fed animals use up far too much prime land for the nutrients they provide.

“The real population crisis is livestock, not people” he says.

Amount of agricultural soil being lost globally per year

Time it takes to replenish one inch (25 mm) of soil

From The State Of Global Food Production And Recommendations For The Future, by Leslie Jermyn, published in Science for Peace’s September 2009 bulletin.