NOW MagazineNewsReport from inside a reopened Ontario casino

Report from inside a reopened Ontario casino

With its strict safety protocols and distanced slot machines, I felt safe inside one of the reopened Ontario casinos. I was also bored out of my mind. 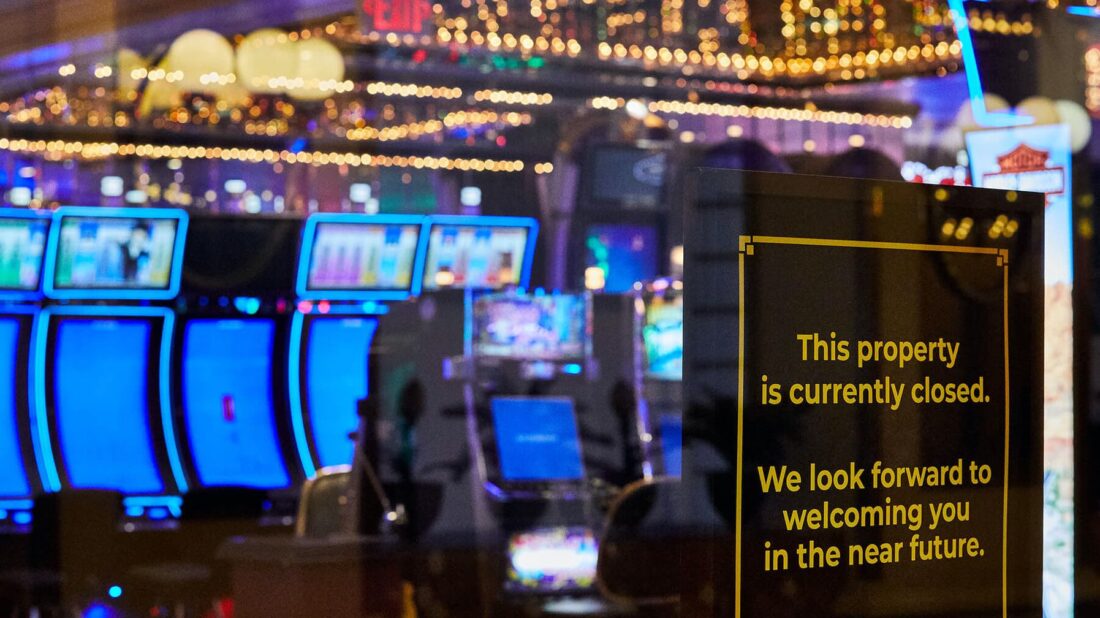 Even this pic of a closed Vegas casino has more excitement than the dreary reopened Ontario casino I attended.

I didn’t hit a jackpot. But at no point did I feel unsafe because of COVID-19. Being inside one of 11 reopened Ontario casinos, with a maximum capacity of 50 patrons and strict safety and sanitation protocols, all I felt was bored – and depressed. The place had all the ambience and charm of a minimum-security prison.

On Monday, nearly a dozen casinos run by Great Canadian Gaming Corporation reopened after being dark for six months. So I asked my father – who’s intimately familiar with all the casinos within a two-hour radius of Toronto – if he wanted to go. He said sure.

You have to reserve two-hour playing times online, and by the time I got around to booking, many of the casinos closest to Toronto – Ajax or Woodbine in Rexdale – were filled up. But I noticed a couple of spots open for Elements Casino Brantford, the town made famous by hockey legend Wayne Gretzky. (There’s a sports centre and parkway named after him.)

I’d been there several times before, and my dad knows it well. We got there at the recommended 15 minutes before our start time of 2 pm and waited in the physically distanced outdoor reservation line. Six or seven people were ahead of us. Masks are mandatory both in this line and in the standby line, and there’s no smoking.

A masked employee came over and told one patron behind us to butt out a cigarette and put on his mask, since this was “casino property.” Someone else told us to have our QR confirmation codes and photo ID ready. Meanwhile, 2 pm had come and gone. It was getting chilly. Several patrons exited the building, some of them using walkers and canes. One man burst through the door, removed his mask and cheerfully exclaimed to us: “No food! No drinks! No winning!”

Whatever happened to hospitality?

At about 2:10 pm, they let four people in. Five minutes later, they let in one or two more. Finally, it was our turn. A brusque security guard used an iPad to scan our QR codes and check our ID. We were ordered to pump hand sanitizer into our hands and given colour-coded wristbands to identify which session we were part of. And then we were told to remove our masks and hats and stare somewhere up near the ceiling, presumably for our photo to be taken.

There was no host. No one saying, “How are you?” or “Welcome back, we’re so glad to see you again!” or even a basic, courteous “Sorry about the wait.”

On the escalator up, our masks back on, my dad muttered, “It’s like we’re degenerates or something.”

At the top of the escalator we scanned the place, which, at 30,000 square feet, normally houses hundreds of people laughing, playing and drinking. It was eerily quiet.

I’ve been in some depressing casinos in my lifetime: some of the dives in Vegas’s Glitter Gulch, for instance, or Atlantic City before it got cleaned up, and a particularly sleazy-looking gaming house in Florida. This felt worse.

We both knew that the table games were closed – they were roped off. (Too bad, because Brantford has a decent craps table.) But one entire half of the property was dark, including the Keno and poker machines my dad enjoys playing. Even the Player’s Club, the place where you sign up for a frequent user card, was closed.

In the open half, only one out of every four or five slot machines was turned on. This makes sense, since you’re metres apart from anyone else. But the effect was spooky, like being in a warehouse. Occasional plexiglass dividers are present, but there doesn’t seem to be any pattern to them, as if the casino began installing them and then gave up.

There wasn’t much choice in games. But because we only had two hours – minus the 20 minutes spent in line and getting checked in – we scrambled for any game we could find. In a regular casino, there’s a feeling of: I’ll try my luck here, and if I’m not doing well I can follow the flashing lights and catchy sounds and try something else. With so few games, and the clock ticking down on my time slot, a feeling of desperation set in. Maybe I should just stick with this game until it finally paid out.

When I did leave a machine, my pockets emptier, I was surprised no one came to clean it right after. (I was using one gloved hand to press the buttons and screens.) Because no one’s serving drinks, there’s little conversation. The only talking I did was tocurse my inevitably crappy bonuses.

My dad and I ended up leaving a few minutes before our session was over. We were both cleaned out, and utterly underwhelmed by the experience. I was also thirsty. In normal times, the casino has a complimentary beverage station, but it was obviously closed off.

Before leaving, a worker scanned our codes again, presumably so she’d know how many patrons were in the casino before letting in the new group. We were ordered to throw out our wristbands. Some people, she told me, book several two-hour sessions and in the middle go out for a quick coffee or snack then return.

She smiled and said, “Thanks for coming.” The smile made sense. The casino got our money, which was the point of their reopening in the first place.

Exiting, my dad and I saw people eagerly lined up for the next session. “It’s like a ghost town in there,” I warned them.

And then we got into the car to go find dinner before returning to the GTA. Once inside, my dad said, “The only good thing about this is that I got a great parking spot.”

So at least that was a win.