Former chief Bill Blair was all for purging info collected on innocent people - most of them young Black men - during street checks, so why has Mark Saunders reneged? 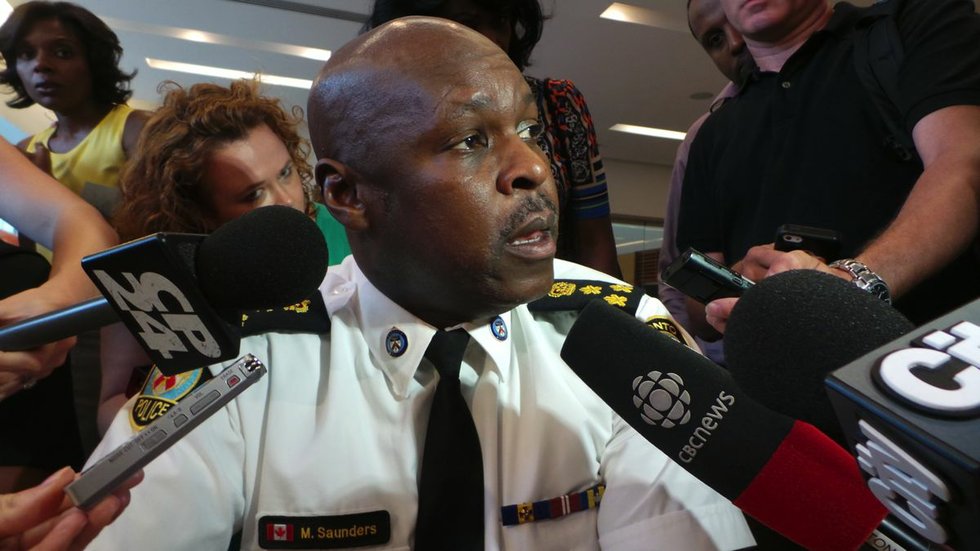 Journalist and community activist Desmond Cole added another experience to his history of interactions with police when officers escorted him out of a meeting of the Toronto Police Services Board on Thursday, April 20.

Cole was staging a one-person act of civil disobedience, refusing to move from the deputant’s seat at the board’s regular monthly meeting until members acted on his demand to destroy information gathered through the practice of carding and stored indefinitely in police databases.

It’s one major piece of business left unfinished when Ontario introduced its regulation to control carding last spring. By failing to give direction, the province left it up to individual police boards and chiefs to decide what to do with data collected through the practice (some 1.8 million contacts between 2008 and 2012), which has disproportionately targeted Black youth and members of other marginalized groups.

The issue Cole raised – that innocent people who have not been the targets of criminal investigations must not be criminalized or subjected to unfounded police inquiries due to information about them gathered from carding that is stored in police databases – has taken on added significance in recent weeks.

A Star report on Ontario’s anti-terrorism plan suggests that data gathered through carding should form part of the information that local police forces are to share with other police agencies, including the RCMP and the OPP’s anti-terrorism unit.

Former chief Bill Blair was all for destroying the info. However, current police Chief Mark Saunders has decided to renege on Blair’s decision, and the police board is clearly inclined to go along with him.

What data to retain, for what reason and for how long are questions that have been part of the board’s effort to deal with carding since 2013.

After refusing for the longest time to budge, Blair did a U-turn. In his last report on the subject to the board on April 14, 2015, days before stepping down, Blair announced publicly that any data gathered from community engagements “will be available for investigative purposes for a period of one year from date of entry,” and no longer.

Blair laid out a detailed process for the retention and destruction of future carding information. As a rule, he proposed to keep data for a year any retention beyond that was to be based on strict criteria. He also announced a process for handling historical or “legacy” data.

His report said that such data “will be sequestered from the investigative database for a period of one year.” A day after the anniversary, each such record will be “purged from the Service’s database” if it has not been used or if it “is not required for any ongoing historic investigations or judicial proceedings.”

One highly placed source at police headquarters says that board chair Andy Pringle would like nothing more than to purge the carding data, but that board lawyers have “forbidden” it.

Since the lawyers’ advice has not been divulged to the public, we do not know what risks so outweigh the public interest that the board is prepared to continue to court community anger and disrespect on the issue.

I find this bizarre. The board does not report to lawyers it is for the board to decide how it will use legal advice.

We do know, though, that Chief Saunders has never been in favour of giving up either the carding data or carding itself. How convenient, then, that the board obtained legal advice that supports his position, which is consistent with the national security lens through which he apparently views his job. To be sure, Saunders is one of a handful of senior officers considered an expert in national security.

Saunders built his career largely in the underbelly of policing, working undercover and in homicide. He spent very little time in community-based policing. It’s not surprising, then, that his justification of carding and all the practices related to it is informed by the needs of criminal investigations.

While he may have had to give up the exercise of random carding due to the provincial regulation, he’s clearly not prepared to give up its ill-gotten fruits – even though there is no legal or regulatory basis for keeping this information.