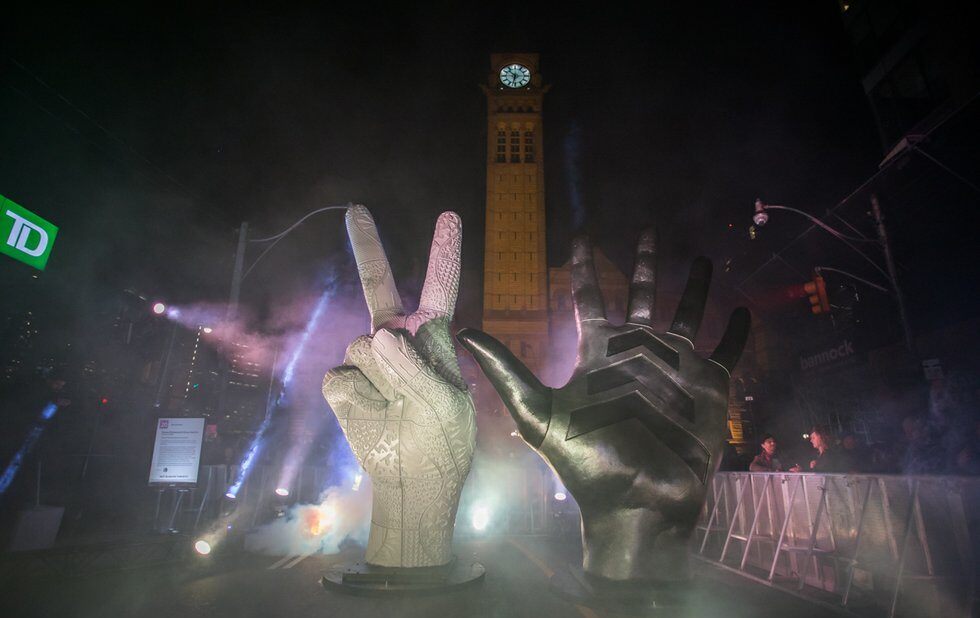 The installation Peace To The Past, Reach For The Future at Nuit Blanche 2019.

The city is extending the cancellation of major events and festivals until September 30 and is moving Nuit Blanche online.

The move will impact all city-led and city-permitted outdoor special events, the city said in a press release on Monday. The permit for the Toronto Waterfront Marathon on October 18 is also cancelled.

Earlier on Monday, Doug Ford’s government announced Ontario would start moving into stage 3 of the provincial reopening plan. Nearly all businesses will be allowed to reopen in most of the province beginning on July 17, but Toronto will remain in stage 2.

At a city hall press conference on Monday, Toronto’s Medical Officer of Health Eileen de Villa said the city continues to see around 40 new infections and less that two people hospitalized each day.

The number of active outbreaks has dropped significantly from a peak of 108 in May to 13 as of July 13. There were more than 120 new cases confirmed in the city between Friday and Sunday.

“Overall, we are continuing to see fewer people diagnosed with and hospitalized from COVID-19 in our city,” she said.

Under stage 3 of Ontario’s reopening plan, social gatherings of up to 100 people will be allowed outdoors and 50 people indoors. Health Minister Christine Elliott said Toronto and the rest of the GTA could move into stage 3 as early as July 24.

Although set to take place on October 3, all-night outdoor art event Nuit Blanche is also being reimagined as a digital event in order to curb spread of COVID-19.

“With an annual attendance of 1.2 million, Nuit Blanche is the largest free, contemporary art event in North America,” the city’s statement reads.” To reduce the spread of COVID-19, this year Nuit Blanche will not hold large-scale in-person events. Instead, Nuit Blanche will engage its wide audience through an improved digital experience, including a new public archive of works presented at Nuit Blanche Toronto in the past, an expanded series of Nuit Talks, podcasts and live streamed dialogues, and special online events on October 3.”

Toronto previously cancelled all city-run and permitted events through June 30 and then extended the ban to August 30. The move forced major events such as Toronto Pride, Toronto Outdoor Art Fair and Toronto Caribbean Carnival to pivot to online experiences.

The ban does not include outdoor sport facility permits and permit activities issued by the Parks Forestry and Recreation division in parks and other city sites that are allowed under stage 2. It also does not affect professional sports.

It’s not clear how the Toronto International Film Festival will proceed with September’s event. TIFF has previously said it will only program 50 films this year and host a mix of in-person and online events.

“The exact details of what they’re going to do we will leave it to them to announce in due course,” Tory said. “What they will put forward will include elements that have been expressly consulted upon with the medical officer of health and her team.”

The provincial guidelines for stage 3 cap the number of people in a movie theatre – including multiplexes – to 50 not including staff.

With so many summer events cancelled or moving online, the city is also capitalizing on the resurgence in drive-in venues.

Toronto is teaming with local film festivals to host free movie screenings at drive-in venues including Ontario Place and the newly launched CityView Drive-In across from Rebel nightclub.

The events, which will also include concerts and sports broadcasts, will take place at the following venues:

Toronto Public Health has created guidelines for organizers, who will produce, program and oversee these events.