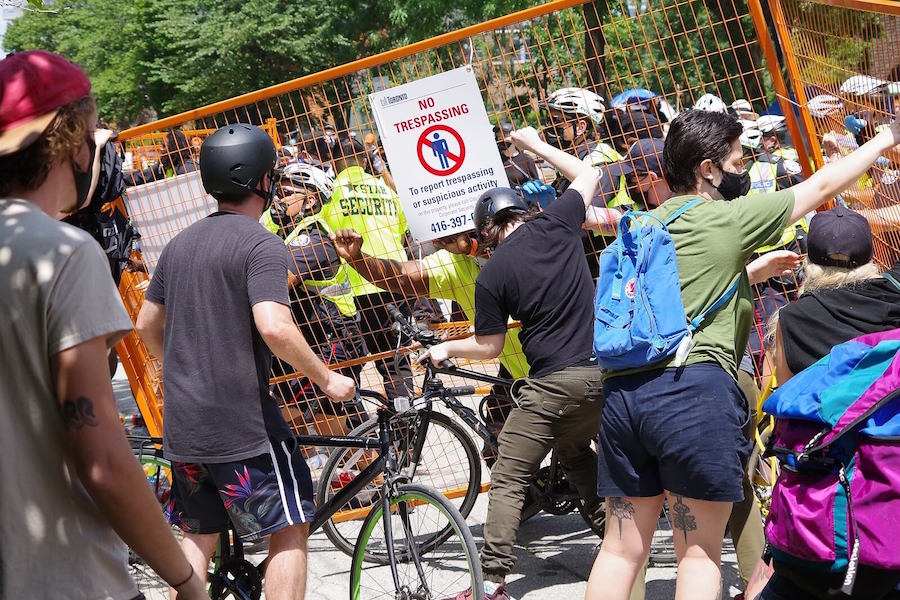 The scene at the Lamport Stadium encampment clearing became chaotic after people attempted to take down temporary fencing.

Dozens of people have been arrested after police moved in on encampment resident supporters outside Lamport Stadium this afternoon.

Police, private security and city workers arrived at the site early Wednesday morning to enforce trespass notices that were issued to people living outside on June 12. In a news release, the city estimated 14 to 18 are living at the site in 30 structures.

Heeding a call from the Encampment Support Network (ESN) and other activists, a crowd of supporters arrived at the park near King and Dufferin, surrounded the tents and other structures and linked arms.

“As always, ESN takes care to align our conduct with the requests of self-determined encampment residents,” a statement on the group’s Instagram feed reads. “This clearing took place without proper consultation or due respect for the human right to shelter.

“Residents at Lamport Stadium and Moss Park have been clear that their self-determined request is a ‘stand your ground’ defence with help from supporters in the general public.”

By the end of the day, the city confirmed in a news release that two of the 11 encampment residents in the park accepted spots in a shelter or hotel program.

“Five people already had a space in the shelter system, three people left of their own accord and one person declined an offer of permanent housing,” the city said. “Thirty structures have been removed from Lamport Stadium, as well as knives, an axe, a hatchet, propane tanks and car batteries.”

Police tearing down tents, leading some away in handcuffs pic.twitter.com/dD0ECrIdpr

Video moments ago as Toronto Police move in and begin arresting those inside the homeless encampment at Lamport Stadium @CityNews pic.twitter.com/RLm3yMlK9w

Videos posted on social media by Global TV and CityNews reporters captured the moment shortly after 1 pm when police broke up a group of supporters forming a line around the encampments and began making arrests.

The city said in a statement that it requested police assistance in clearing the fenced-in area after encampment supporters refused to leave.

“Protesters today at Lamport Stadium park indicated they would not leave the fenced area, preventing city staff from doing their jobs in assisting encampment occupants, and making the park safe and accessible for all,” the city said. “Protesters inside the fenced area were cautioned multiple times throughout the day that they needed to leave the area or would face possible arrest.”

Most people will be released, police said.

“We do our best to get to a place where nobody gets hurt and we don’t have to be physically fighting with people but you were all witness to how we had to get to that place today,” Toronto Police Staff Superintendent Randy Carter told reporters at the scene.

Toronto Police also said one officer was injured after “being sprayed with an unknown substance” and would provide an update on arrests later in the day.

Supporters of encampment residents rallied at 14 Division to demand the release of the people arrested. Police allege the demonstrators threw projectiles, including soup cans and frozen bottles. Three people were arrested and one officer was injured, police said.

Photographer Nick Lachance (left) says he was hit in the face with pepper spray.

“Things got out of hand”

Freelance photographer Nick Lachance, who was on the scene, reported being pepper-sprayed.

“As the tactical police began moving through the camp clearing its residents, supporters outside the fencing attempted to breach the zone of exclusion. They were met with an aggressive response from private security and the police, as people were shoved and hit with batons.”

Lachance said police attempted to close the gap made by protestors in the fence. “One officer deployed pepper spray at a protester I was photographing and I was hit directly in my right eye. After I could see again I witnessed several people being arrested and many others shoved hard by the police.”

“That’s when things got quickly out of hand,” he said. “Security staff and then police tried to push the gates back closed. A couple of officers fired pepper spray… at that point I saw some of the encampment supporters running up Fraser saying there are police horses coming.”

He was standing near Lachance when his fellow photographer was hit with pepper spray. Reis then moved up to the north end of Fraser near King where he said he saw police attempting to push people out of the site and tear down a barricade made of wooden pallets.

“It all happened pretty quickly. It was all very heated,” he said. “Police were very pushy with people.”

He said he also saw several encampment residents leaving throughout the day.

“If they wanted to traumatize people, they certainly succeeded,” Reis said.

The police action comes a day after nine people were arrested while city workers cleared an encampment in Alexandra Park. Seven of the nine were arrested for trespassing. A private security officer also detained a Canadian Press photographer and issued a trespass notice, which comes with a 90-day ban from the park.

The restrictions placed on media prompted the Canadian Association of Journalists to issue a statement calling on the city to “commit publicly to stop arresting reporters covering the removal of homeless encampments.”

On Wednesday morning, police began erecting fencing around the Lamport encampment site and said one still photographer and one TV photographer would be allowed into a media pool. Toronto Sun reporter Bryan Passifiume tweeted journalists were being threatened with arrest.

The city said on Wednesday evening that 14 people from the Alexandra Park encampment accepted indoor accommodation with supports, and 12 left the park of their own accord. City staff also removed 68 structures and collected 19.5 tonnes of debris.

Toronto officials consider encampments unsafe and in violation of a municipal law that deems green spaces “private property” of the city.

The city said the residents would be offered indoor accommodation with access to mental health supports and a housing worker. “Occupants will be given time to pack two bags of belongings to take with them. All other belongings will be collected and stored for up to 30 days for future pickup,” a statement reads.

Human rights advocates, lawyers and encampment residents have countered that the city’s powers are not grounded in property ownership, adding that shelter and hotel shelter spaces being offered are not safe, lack privacy and have restrictions such as curfews.

Throughout the morning and into the afternoon, activists on the scene continued to call for people to head to Lamport to act as witnesses as police warned that supporters were in violation of the Trespass to Property Act.

we’re being told that we’re now trespassing in the park. police decide when a public space is longer public. the threat doesn’t address any housing needs, but this is the playbook now pic.twitter.com/xp31PvUOIP

We’re at Lamport Stadium where @ESN_TO and ESN Parkdale are mounting an encampment defense with encampment residents. Police have moved in on foot, bike, horseback, and vehicle with Star Security and court services present. 1/#Toronto #ONpoli pic.twitter.com/aC3bSHwZS1

On June 22, dozens of city workers, police and private security officers descended on Trinity Bellwoods Park to evict unhoused people who had been living outdoors.

On May 19, the city was unsuccessful in completely clearing the Lamport encampment after supporters surrounded the residents and their structures.

See more photos from the encampment clearing at Lamport below.

Update (July 22, 9 am): This story has been updated with new details. With files from Enzo DiMatteo.