An illustrated guide to Toronto’s most notorious intersections

If you call the Big Smoke home, you’re likely to recognize one of the tangles of asphalt and signage in illustrator Peter Gorman’s map of Toronto’s most notorious intersections.

That moment of recognition is probably followed by a pang of exasperation. There it is, codified in art, the junctions that make you internally scream, “Seriously?” as you recall newbies gingerly navigating their inscrutable turns and corners.

Gorman discovered the urban intersection’s power to provoke back in 2017. An avid cyclist, he had just settled in Seattle after a year-long bike trip across North America.

As he traversed Seattle’s idiosyncratic intersections by bike, it occurred to Gorman that these unique interchanges of people, bikes and cars struck a chord with locals.

His instincts were bang on. When he posted a print of 20 Seattle crossings to the website Etsy, Gorman received 600 orders in the first week alone. He now receives regular requests to create similar maps of other cities.

Though he’s visited Toronto a number of times, Gorman had to research the city’s most awkward intersections, or, as he puts it, “The ones that people love to complain about.”

A good chunk of the final 20 depicted can be found within Old Toronto’s pre-amalgamation borders. Many of Toronto’s original thoroughfares were established before the automobile, when intersections often developed as responses to existing geographical and man-made features. Those adaptations led to the funky, twisted crossings that appeal to a design-minded guy like Gorman.

Toronto historian Richard White, author of Planning Toronto: The Planners, Their Plans, Their Legacies 1940-80, explains that throughout the city’s history, planners were repeatedly forced to make a choice: demolish an inelegant intersection and rebuild it to increase efficiency, or work around the awkwardness with new regulations, signage and moderate construction. Most chose the latter, resulting in slower, safer and decidedly weirder intersections.

“It reflects a respect for the urban fabric that they didn’t want to tear it up and make it more efficient,” says White.

For example, the infamous triangle where Dundas West, Lansdowne and College intersect is the result of a long history of such adaptations. Dundas cuts across Little Portugal at an angle because that section of the street was likely built in the early 1800s, before the grid that surrounds it existed. A Victorian version of the large overpass that crosses Dundas was in place by the 1890s to accommodate the wide railway corridor through which two diverging lines needed to pass. Lansdowne arrived at Dundas in the late 1880s, and College was finally extended past Lansdowne to meet Dundas at an awkward slant mid-overpass in the late 1930s or early 40s.

The result is a trifecta of wide intersections that cross at diagonals and feel dangerous to traverse on foot or by bike.

Although Gorman didn’t set out to represent the city’s most deadly junctions, the subtext of danger is his selections. As one Reddit commenter put it: “Wonder what the body count is at these intersections.”

The city’s Vision Zero mapping tool tells us that the “body count” since 2015 is zero. There have been 17 serious injuries at the 20 intersections illustrated by Gorman, but according to the city, they’re not our most dangerous. 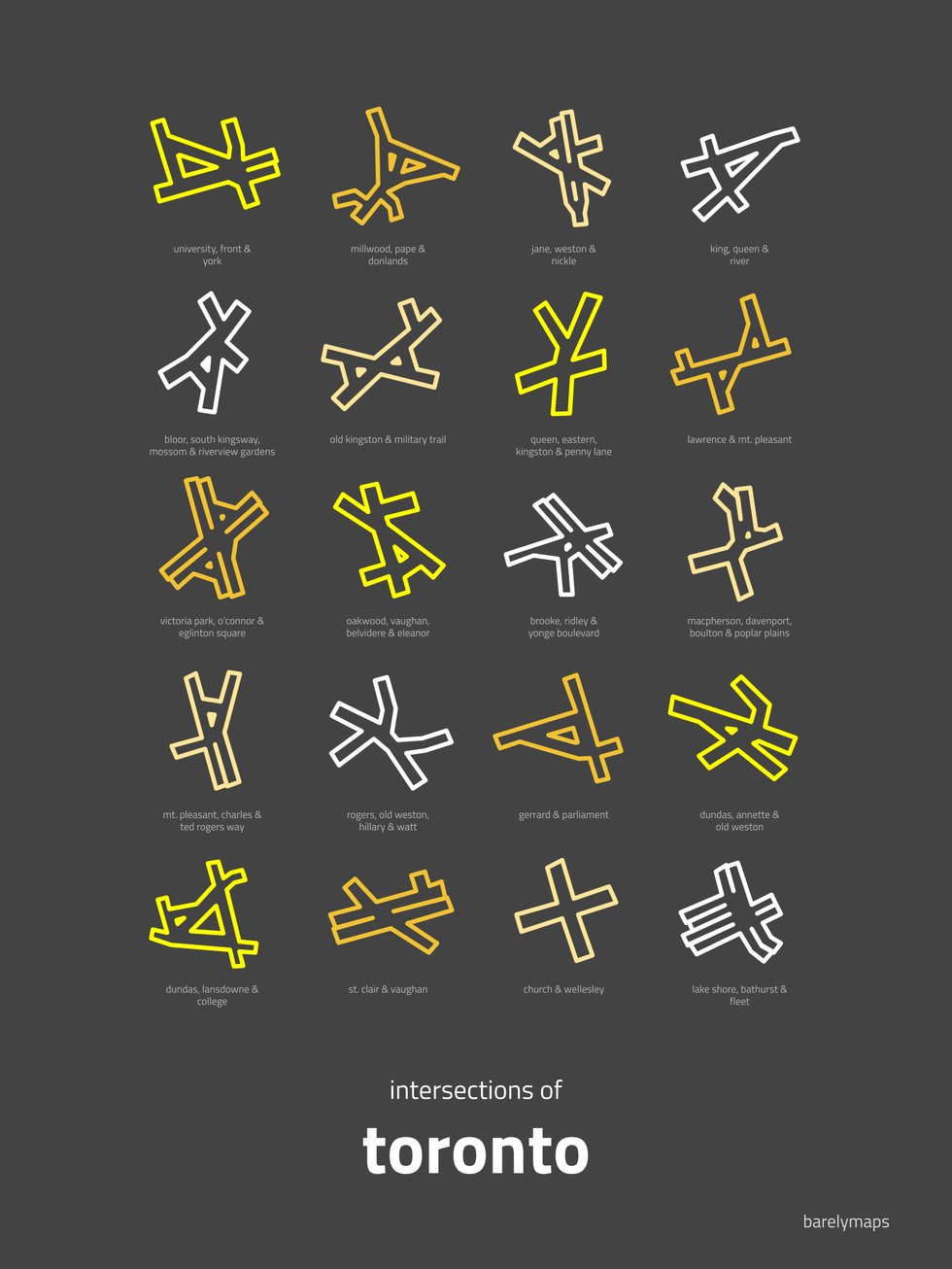 Toronto’s real danger zones can be found on another map, one published back in April of this year by the Centre for Active Transportation (TCAT). Using data gathered from a 2013 report by the City of Toronto’s Traffic Safety Unit and Pedestrian Projects Unit, TCAT mapped Toronto’s 100 “priority intersections” and found that 84 per cent are in the suburbs of North York, Etobicoke and Scarborough.

And there’s the rub. Toronto’s most dangerous intersections don’t look like a tangled knot or a splayed stick figure of branching streets. Danger in Toronto looks like a simple cross where pedestrians need to traverse arterial suburban roads.

Planned during the suburban development boom of the 1950s and 1960s, these roads connect the protected cul-de-sacs and winding residential side streets that make up much of suburban Toronto.

Traffic on these roads may have been manageable when they were built decades ago, but today they bear the load of a GTA that has grown by more than 2.5 million people since the mid-1980s. They were built for a speedy commute, not active street life. And high speed limits combined with insufficient pedestrian crosswalks have meant death or serious injury for far too many Torontonians.

In 2016, deaths from traffic collisions in the GTA hit 78. The city responded with Vision Zero, a plan with the aspirational goal of reducing traffic deaths and serious injuries to none. When Toronto reached 63 deaths in 2017 and 66 in 2018, Mayor John Tory admitted that perhaps the plan “wasn’t working,” and in July of this year rolled out Vision Zero 2.0.

York Centre Councillor James Pasternak is the current chair of the Infrastructure and Environment Committee and a leader of Vision Zero 2.0. He says that while the plan’s initiatives are urgent, delays in provincial approval combined with internal staffing shortages and a severe lack of enforcement mean the rollout has been slow.

“Much of what we’re doing now is treading water,” says Pasternak.

One of the Vision Zero 2.0 initiatives most applauded by safety advocates like TCAT is the redesign of roads to add features that encourage drivers to slow down. These include wider curbs at intersections, narrower lanes and barriers that separate cyclists and pedestrians from cars.

It’s ironic that we’re intentionally modifying our newer intersections so that they require deliberation to navigate. Who would have thought that the roads and intersections that arose from careful, ground-up planning are today’s most dangerous?

Meanwhile, the oft-maligned, perplexing downtown crossings – so often the product of cautious, incremental change – may actually be helping to slow us down.

How GTA residents can help Turkey after the disastrous earthquake

Business confidence at an all-time low in Ontario: study