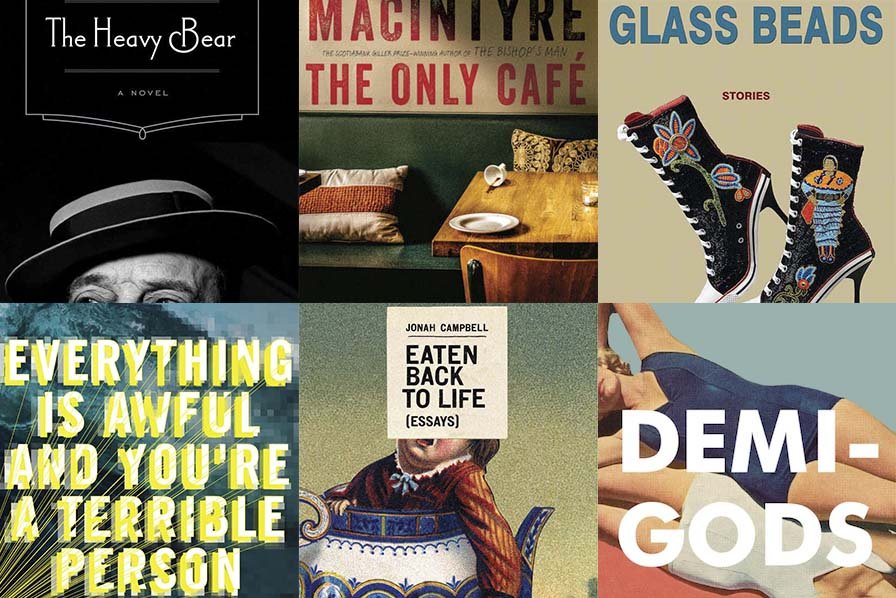 The Only Café, by Linden MacIntyre (Random House Canada)

The Only Café was immortalized in the 90s by rock band Lowest of the Low as a place to drink until your kidneys fail, but in Linden MacIntyre’s new novel, the scrappy Danforth pub is connected to an international mystery with roots in the Lebanese civil war. The Giller Prize winner’s fifth novel follows a young journalist who discovers clues about his late father’s disappearance at the Only, propelling him on a personal investigation into the circumstances behind his dad’s life and death.

Eliza Robertson’s much-praised 2014 debut story collection, Wallflowers, placed her on a stack of critics’ writers-to-watch lists. The young Montreal author’s much-anticipated novel, a coming-of-age story set in the 1950s, is already being compared to Emma Cline’s The Girls, last summer’s cultishly popular read. In Demi-Gods, a young girl becomes embroiled in a sexually charged, dangerous relationship with her new stepbrother as she struggles to resist his increasingly deviant games.

Before Dawn Dumont was onstage making audiences laugh across North America, the Plains Cree actor honed her stand-up skills in Toronto at Yuk Yuk’s and the Laugh Resort. Dumont, who grew up on the Okanese First Nation in southern Saskatchewan, draws on her natural comedic talent in Glass Beads, a collection of linked short stories that follows the lives of four Indigenous friends from the early 1990s to the late 2000s as they tackle life off the reserve. Political, personal and insightful, Glass Beads also sports one of the year’s most striking cover images.

Gentlemen Of The Shade: My Own Private Idaho, by Jen Sookfong Lee (ECW)

ECW Press’s Pop Classics titles are perfect beach reads, but don’t let their popsicle-hued covers and slim size fool you. Inside, they contain smart, insightful writing about pop culture, covering subjects from Showgirls to Nicolas Cage. The latest in the series is by talented Vancouver novelist Jen Sookfong Lee, who explores the impact of the 1991 film My Own Private Idaho on her generation’s thinking around gender identity and sexuality, with a side of “gushing” over its stars, Keanu Reeves and River Phoenix.

Eaten Back To Life, by Jonah Campbell  (Invisible)

Jonah Campbell is not a typical culinary writer. He will never gush about avocado toast or encourage your sparkly unicorn food. But if you prefer your food writing with a side of misanthropic cynicism, Eaten Back To Life is for you. In his second essay collection on the subject, the Montreal author delivers another helping of thought-provoking, critical words connecting a wide range of cultural topics, from pig heads and French gastronomy to Nigella Lawson and David Cronenberg.

How To Fall In Love With Anyone, by Mandy Len Catron (Simon & Schuster Canada)

In 2014, Mandy Len Catron and her date eschewed the usual dinner and a movie and instead embarked on an experiment, asking each other the 36 intimate questions that Arthur Aron asked in his 20-year study on manufacturing romantic love. Catron wrote about the experience for the New York Times’ Modern Love column the essay went viral, receiving more than 8 million views in a month. In her fascinating new book, Catron expands her Times piece, drawing on psychology, history, and science, as well as on her own experiences, to investigate one of life’s biggest mysteries.

Everything Is Awful And You’re A Terrible Person, by Daniel Zomparelli (Arsenal Pulp)

The Substitute, by Nicole Lundrigan (House of Anansi)

Newfoundland author Nicole Lundrigan made her mark as a stylistic literary novelist who writes deep character studies that investigate the dark side of human nature. Lundrigan, who now resides in Toronto, was inspired to go even darker with her psychological thriller The Substitute, about a scientist named Warren who takes a break from the lab to teach middle school. Warren befriends a student, only to discover her hanging from a tree in his backyard, and so he flees. The novel is told from the perspective of an anonymous narrator, who has creepy insight into the events surrounding the girl’s death.

The Heavy Bear by Tim Bowling (Wolsak and Wynn)

For those dedicated to the larger literary world even during the summer heat, there’s Edmonton author-poet  Tim Bowling’s latest novel The Heavy Bear. In it, a disillusioned man – who happens to be a writer named Tim Bowling teetering on the edge of his 50th birthday – gives up his regular routine for an adventure with a motley crew consisting of the ghost of Buster Keaton, a young woman who resembles Pippi Longstocking and American poet Delmore Schwartz, in the form of a bear. Beautifully written, this is a book for readers, and for those looking for reassurance that middle-age doesn’t mark the end of personal creativity.

By day, Toronto-raised Adam Sternbergh is a well-known journalist and editor for media outlets such as Vulture and New York Magazine. But something must happen to Sternbergh at night, as he’s produced some of the most brutal noir thrillers of the past few years. For the Coen Brotheresque The Blinds, Sternbergh leaves behind the near-future of New York City, the setting of his killer-for-hire Spademan series, for a small dusty town in Texas, where all the residents are convicted criminals – only they don’t know they are because everyone’s memories have been erased. After an unexpected revolt, it’s up to the town sheriff to keep the peace, and his secrets intact.