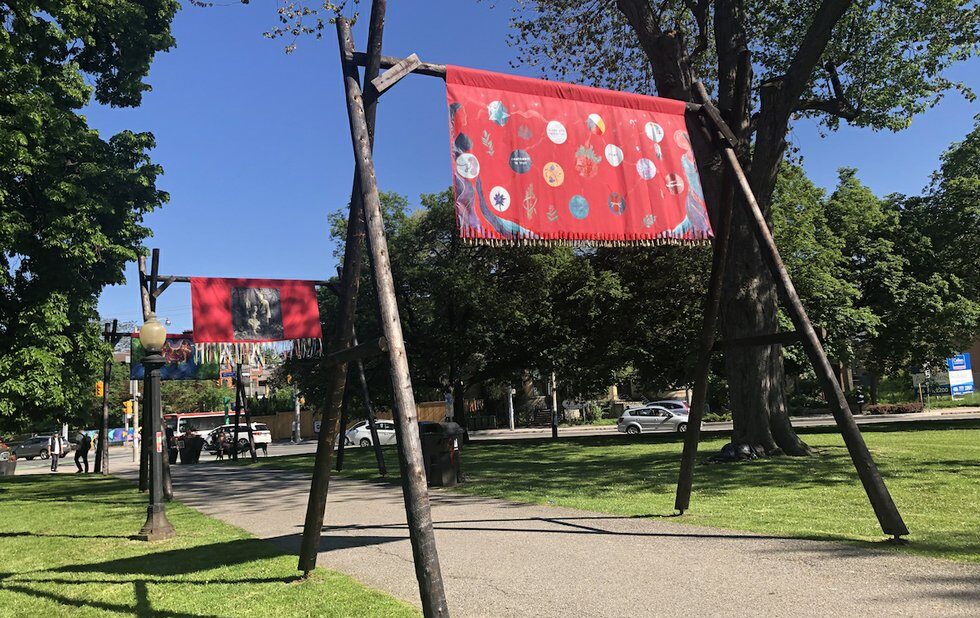 In Allan Gardens, 20-foot-tall charred cedar logs hold 13 large red banners aloft. Visitors can walk underneath them in this installation reminiscent of Christo and Jeanne-Claude’s The Gates, in which orange fabric billowed in New York City’s Central Park in 2005.

But this exhibit, called Red Embers, has a much deeper and more important message. The banners are designed by 15 Indigenous women artists and dedicated to Missing and Murdered Indigenous Women and Girls (MMIWG).

Launching a week after the National Inquiry’s final report concluded systemic violence and discrimination against Indigenous women and girls is genocide, this major public art installation was entirely envisioned, designed and executed by women, a fact the design team – Tiffany Creyke, Larissa Roque and Citylab’s Lisa Rochon – believe is a first in Canada.

“We feel very strongly that the country needs to see all-woman teams coming together to imprint and shift civic design and architecture in our city,” says Rochon. “Ninety-eight per cent of everything designed in our cities is designed by men. We believe that sensibilities, emotional intelligence and expertise of women needs to be brought to this city, this civic realm.”

“[Larissa and I] were working in an architecture firm, and all the development projects we received around Toronto were all male-focused,” says Creyke of her motivation behind Red Embers. “The work that her and I would put forward would be disregarded, and we were feeling very frustrated [so] it was important to have structural engineers and everyone on the development team be female.”

The team won a Public Space Incubator competition grant in 2018, awarded by Park People, and they quickly assembled their all-woman team to design a matriarchal public art installation in Allan Gardens. The Native Women’s Resource Centre of Toronto became their charitable partner and collaborator. The partnership included everything from the designers meeting their Elder there, to the centre’s executive director and a few staff members walking over to provide the crews with lunch.

“We wanted to enliven and beautify Allan Gardens,” says Rochon. “From the outset, we wanted to create a poignant memorial to MMIWG, and I think it eventually became an act of civic beauty and civic resilience and resistance.”

“Every artist spoke to a personal experience of how MMIWG has affected them, whether through their community, themselves, their sisters, grandmothers… it was a very personal project for every artist selected,” says Creyke.

The three co-designers decided to make the cedar posts charred black to represent the “strength and resilience of women, even when they’ve been scorched and hurt.” The banners are symbolic of the 13 Grandmother Moons within the lunar system, and the artists used materials such as animal bones, tin jingles, reflective fabric and moose hide. 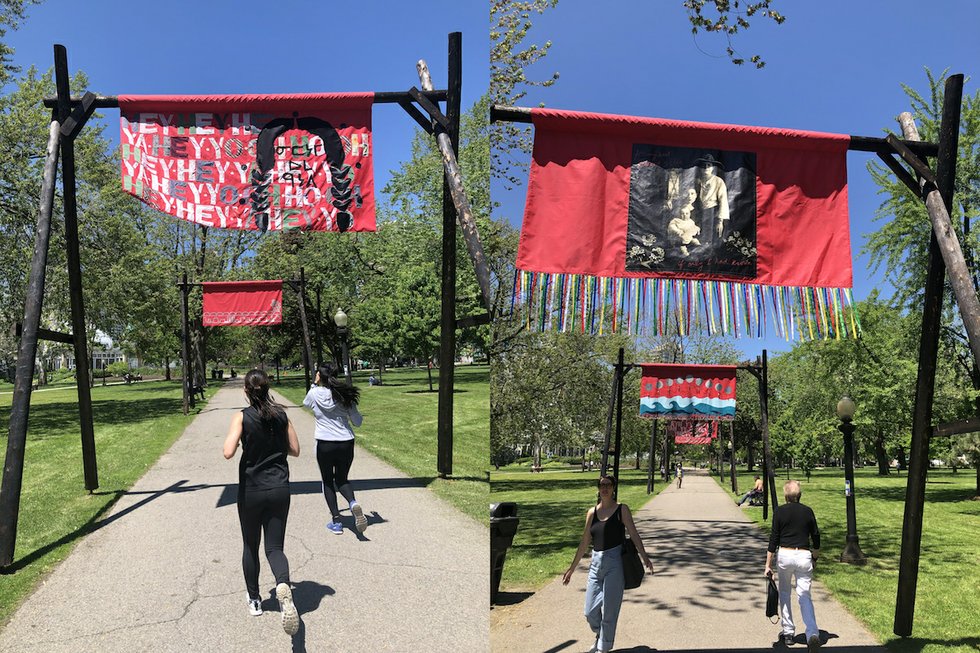 Over a year in the making, Red Embers was tricky to install. The team had to get creative in placing the cedar logs lightly into the land. Rochon says they worked carefully around the tree protection zone and ultimately innovated steel pins that went five feet into the ground using a very tiny space of earth.

For the banner Nokomis [Grandmother], multimedia artist Louise (Minowensetchketkwe) Solomon used faux fur, synthetic hair, vinyl and jingle cones. She braided the hair at the top of the banner to represent strength, happiness and peacefulness. Below the braids there is a divide in the banner that represents an assault or conflict that is, she says, “comparable to losing someone close to us, or feeling marginalized and targeted in our own lands scared for our own lives.”

The hair at the bottom is loose from its braids and is dishevelled and unkempt, representing the MMIWG.

“No longer braided, it blows in the wind, neglected and tangled. But as our hair blows we are reminded that we are not alone,” says Solomon. “The spirits of our ancestors are always with us, even in our darkest hours, the wind reminds us of this.”

Her banner features a large black heart in the middle, which represents the people that are left here without mothers, daughters, aunts, sister and friends, and is surrounded by jingle cones to aid in the healing of broken and heavy hearts.

At the grand opening on June 8, the Ojibwe artist says she was overcome with emotion.

“I watched as pedestrians took in the meaning of the banners and were reading the plaques,” she says. “These people weren’t there for the opening, they were just passing through and this was important to me. It means that we will be educating people about the MMIWG that may not know about the genocide of our people or the findings of the final report. Some people are more visual learners, and these banners offer a huge impact.”

“Red Embers is attainable to anyone, for free, to learn,” adds Creyke. “It’s not aggressive, but it’s also not apologetic in its size. I think that is powerful, which is how I feel about public art telling hard truths.” 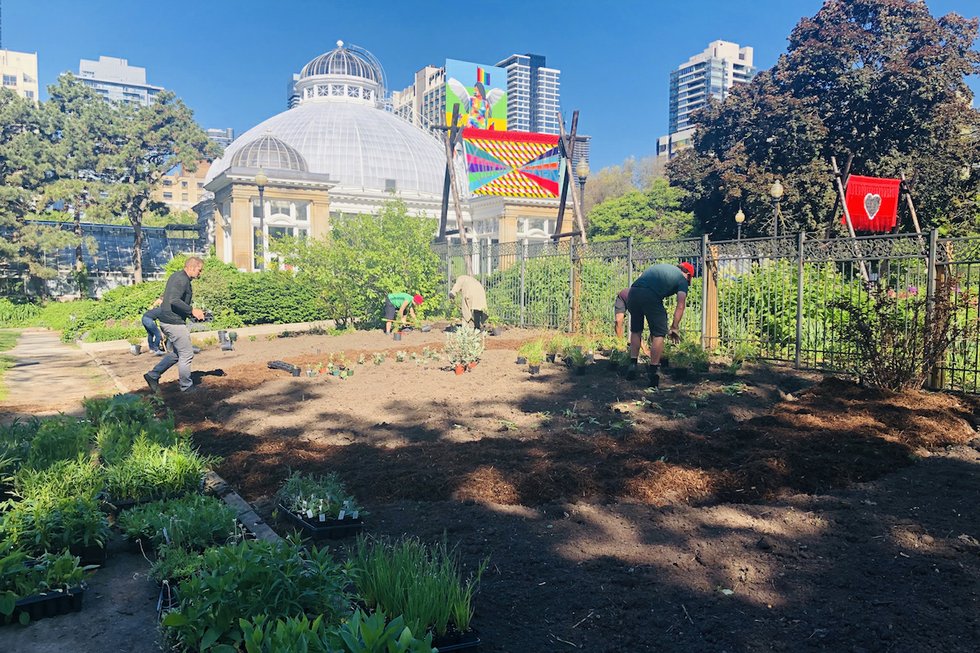 In addition, the gates sit alongside a newly planted Indigenous healing garden, a first for the historic park, with sage, sweetgrass and tobacco.

“Educating people about our history, our oppression, our beautiful, dynamic and vibrant living culture should be a larger and mandatory part of our education system – not just a high school elective that only a few will take,” says Solomon, noting that Doug Ford’s government reversed a decision to make Indigenous courses a mandatory part of high school curriculum. “It was a huge step back and a slap in the face to remove this from the Ontario education curriculum, but like this art installation, we will go forward and hold more space. Our voices will become louder and our images will tell our stories. We will not be silenced or forgotten.”

Red Embers will be in Allan Gardens until the annual Sisters In Spirit Vigil on October 4.