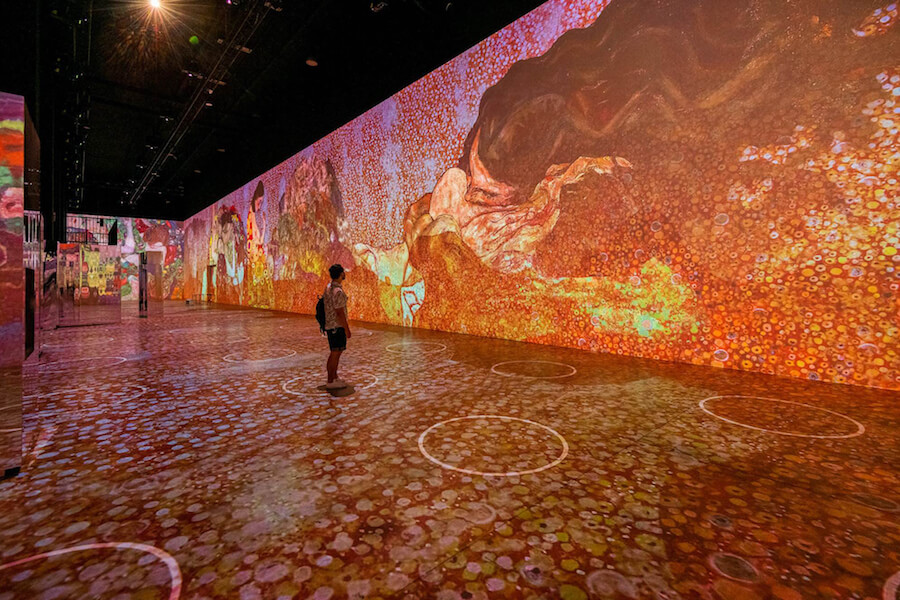 Immersive art gets sensual at show devoted to Gustav Klimt.

The creative team behind Immersive Van Gogh are readying a digital art show based on the work of symbolist master Gustav Klimt.

Running October 21 to November 28, Immersive Klimt: Revolution will have its world premiere in the Toronto Star building at 1 Yonge. The show was created by artist Massimiliano Siccardi and composer Luca Longobardi, the team behind the Van Gogh show.

Producers at Lighthouse Immersive are billing this one as more sensual and playful than the melancholic Van Gogh tribute.

“Klimt was a leader through a time of unrest among artists who wanted to completely reimagine what art could be and make art that favoured graphic style and symbolism,” producer Svetlana Dvoretsky said in a statement. “He was a bold provocateur, particularly in his daring portrayal of the female form. The exhibit bathes the viewer in the sensual colours and golden glow of the period while also evoking the thrilling energy of times of change.”

The Austrian artist was active in the late 1800s and early 1900s and is known for creating lavishly detailed and allegorical works that were considered “pornographic” by some people’s standards at the time. He was the leader of an art movement known as the Vienna Secession.

Immersive art and experiences have become a major trend in recent years – with everyone from the producers of Drag Race touring shows to installation artists describing what they are doing as “immersive.”

These large-scale digital reimaginings of European master painters are generally based on 360-degree digital video projections in contained rooms. Since Immersive Van Gogh debuted last summer, another “immersive” show has opened not far away: Beyond Monet. That show has had its run extended through November 7.

Asked what he thinks of critics who call these shows gimmicky, Siccardi told NOW last summer that museums allow viewers to see the entirety of a classic painting, but immersive art is about going “inside” to uncover “expressive potential.”

“I like to think that after enjoying an immersive work of mine about a great author, people go and see it ‘live,'” he said.

Toronto’s Lighthouse Immersive has taken over five stories of the 1 Yonge Street building that previously housed the Toronto Star printing presses. It includes a main gallery that is 600,000 cubic feet, three additional galleries, offices, two gift shops and a cafe. The company has since opened galleries in Chicago, New York City and San Francisco and plans to open locations in Los Angeles and Las Vegas later this year as part of an 18-city rollout.

Later this month, the company will open two modern dance-based shows: Mikhail Baryshnikov: Looking For The Dance and the world premiere of Touch, a show mixing live dance and digital projections by choreographer Guillaume Côté and artist Thomas Payette. The pair previously teamed on the National Ballet of Canada production Frame By Frame directed by Robert Lepage.

Immersive Klimt will take over the space previously home to Gogh By Car, the drive-in version of Immersive Van Gogh that producers created in response to Ontario’s pandemic restrictions in June 2020. The new show will run alongside Immersive Van Gogh and Illusionarium.

Tickets go on sale for Immersive Klimt on September 18 via the show’s website.