Nuit Blanche 2018: Ekow Nimako creates a monument to Scarborough out of Lego 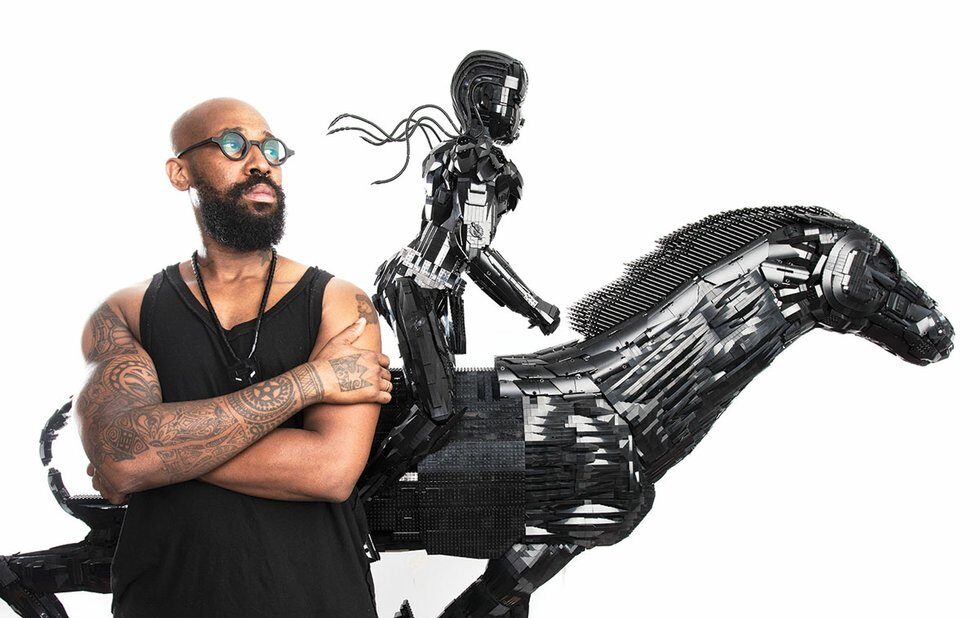 It starts with the eyes.

When Ekow Nimako begins work on a Lego sculpture, the first pieces he fits together form the eyes. On a technical level, it provides a sense of proportion, but it also gives his work an air of austerity. The wild animals and mythical figures he often creates appear severe, impenetrable and warrior-like.

It isnt lost on Nimako that making Lego art speak in such a bold way is no small feat. Hundreds of hours go into his craft. On average, hell clock 16-hour days on a given piece. Hes been working on his current sculpture for the better part of three months.

But its more than that. The Toronto-based artists approach doesnt rely on designs and Lego-approved design software. Its crafted on intuition. He spends hours staring into empty space, creating a mental map thatll guide him piece by piece. To understand that this is Nimakos process and then to see the work is astonishing.

As we talk in his Leslieville studio, the work hes creating for Nuit Blanche is visible through solid oak double doors: an 8×6-foot sculpture that will be comprised of over 80,000 black Lego pieces when completed. Called Cavalier Noir, it depicts a Black child astride a dauntless black unicorn.

As Nuit Blanche heads to Scarborough for the first time this year, Cavalier Noir will join other curated works that artistically disrupt the notion of amalgamation, highlighting the creativity and distinctness of the suburbs arts community.

It will be positioned on a plinth behind the Scarborough Civic Centre, and Nimako envisions it to be a monument that asks: if Scarborough were to commemorate its own heroes, who would be represented?

Its an emblem of hope that speaks to the unsung hero, says Nimako, who has the suburbs racialized and disenfranchised communities in mind. More pointedly, however, Cavalier Noir is a voice for Black youth.

Its important to capture those young minds, he continues. You reach a point where youve got to look at the younger generation and say, The world is yours, what are you going to do with it?

Nimako grew up in Scarborough. As a child, he consumed movies and cartoons depicting the future, but he didnt really see a Black future. Black heroes were rarely the central characters in sci-fi and fantasy. Still, the Montreal-born artist came to understand that theres a power to being at the centre of worlds with limitless possibilities an agency that is at the heart of Cavalier Noir and its fiercesome child-warrior.

Children are so vulnerable in the world, says Nimako. They dont have a lot of agency, but its within stories, and especially myths, that everything gets aggrandized and infused with magic and wonder. You can be at the centre or the teller of this world. Its completely up to you.

While Nimako honours the wealth of imagination at his disposal, which has fed his collections, including Building Black: Mythos, an exploration of mythology and resistance shaped by the melanin-rich beings of Africa-Beyond, he recognizes that a society steeped in anti-Black racism makes it difficult for Black youth to imagine a future in which theyre thriving.

Cavalier Noir stands, in part, as a symbol of a bold and fearless future. Nimako collaborated with filmmaker Director X, who exhibited at Nuit Blanche two years ago with the installation Death Of The Sun, to make as grand a statement as possible. X helped to expand the ever-evolving narrative behind the monuments mythology.

I really get involved in the narrative, says Nimako, listing the questions fuelling his and Xs exploration. How did this child manage to tame such a wild and mythological beast? Clearly, they have some kind of magic kinship. What crusade are they on? Who is this child on the crusade? Whats the name of the unicorn?

While some of those questions may remain unanswered, Nimako says thats okay because its the nature of myth to go on through the annals of time, expand and get built upon to the point where you question whats the truth and whats the myth?

Alyssa Fearon is the curator of the Scarborough exhibition. Titled STYLL, it will highlight the strong artistic production that has always existed in the suburb, and continues to thrive, despite arts in the downtown core receiving the lions share of attention (and funding).

In looking to showcase works rooted in the community, Fearon believes Cavalier Noir will deeply resonate with folk in Scarborough and resound widely with those outside.

[The work] is politically relevant right now, given the amount of statues being toppled globally, and were staring to learn more about the violent and colonial legacies of these heroes weve constructed monuments out of, she explains.

Fearon is referencing an ongoing debate that, in Canada, has seen the removal of a statue of Edward Cornwallis in Halifax and calls to remove Prime Minister John A. Macdonalds name from Ontarios elementary schools because of their complicity in Indigenous genocide. Last year, artist duo Life of a Craphead sent a statue of King Edward VII and his horse floating down the Don River.

Nimako is amused by the amount of monuments with equestrian themes (These generals are put on horses because it makes them look more heroic. But theyre mercenaries, not national heroes). However, his tone becomes steely when he speaks about Cavalier Noir as the antithesis. Rather than a monument to aggrandizement, its purpose is to make those who look at it feel heroic.

Nimakos work with youth exemplifies this goal. Hes conducted various workshops in Toronto and Peel region schools, employing Lego to engage students in creative and critical thinking. The workshop Building Beyond is an exploration of Afrofuturism that asks students of various ethnicities to build their own descendants as they imagine them to be a thousand years into the future. Akin to Nimakos all-Black aesthetic (he almost exclusively uses black Lego in his work), he provides students with a palette of black and brown Lego to construct the facial features.

To his non-Black and brown students, he explains that he has Ghanian ancestry, but he also has a white, British great-grandfather, which opens them up to exploring the idea that their descendants may not share their ethnicity but its important to explore what their experiences might be. His Black and brown students are simply overjoyed to engage with a project that reflects their culture back to them.

I overhear them talking and theyre like: Yes, Black! And they get excited about making dreads [from Lego], he says.

Its Nimakos intention for Cavalier Noir to galvanize youth in the same way. Its androgynous child warrior is clad in armour, complete with a dangling tasset at the waist. One of its most striking features is long cornrows, built from the corrugated hose pieces in Lego Technic sets, that trail and twist in the air, giving the statue a sense of galloping movement.

A protagonist with braids is a powerful symbol. It takes a form of Black cultural expression that is often stereotyped and criminalized under white supremacy and subverts that negative messaging by depicting cornrows as a hairstyle fit for a hero.

Ultimately, Nimakos hope is that Black youth see the monument and feel that theyre the ones whove tamed mythological beasts because youre all warriors to get through this, he says, addressing the audience he hopes Cavalier Noir will speak to the most.

You have to grow up fast and put up the armour and deal with whats out there, he continues. You go to school and your teacher is looking at you funny because of your cornrows all those microaggressions add up and its so daunting sometimes to just be.

So it was really important for me to reflect that struggle as stridently, boldly and triumphantly as possible.