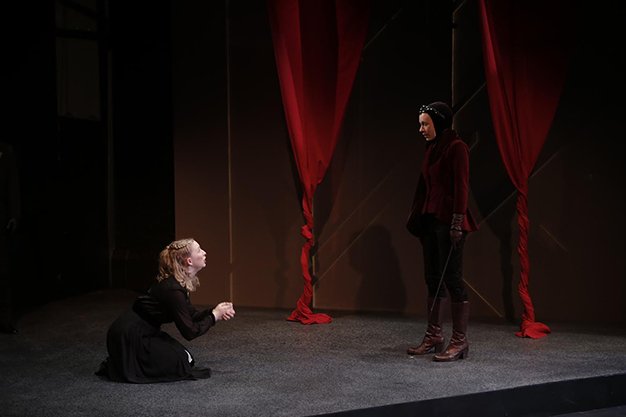 The politics in Friedrich Schiller’s Mary Stuart spill over into several confrontations: England versus Scotland, Protestant versus Catholic, cool diplomacy versus hot passion and, of course, the key battle, that between Mary and her cousin Elizabeth I.

Mary is under guard in England, charged with murder and her implicit attempt to take over the throne from Elizabeth, who hesitates to sign Mary’s death warrant. Courtiers and supporters of the two sides, not all of them transparent in their allegiances, fill the space around the two women.

It’s a thrilling play, especially in the fictional encounter between the rival queens near the end of the first act, and the George Brown Theatre production captures much of the tension in the encounter between Mary (Priscilla Taylor) and Elizabeth (Sarah Doyle). Though Elizabeth has allowed the meeting to be arranged, her first words to her cousin are dismissive: “Who is this woman?” It’s not the most auspicious of beginnings and, after a series of increasingly nasty insults, that meeting concludes with a cry of “Bastard!”

Here and elsewhere, both Doyle and Taylor handle the text well, creating multidimensional figures who know how to play the games necessary at court, where feigned weakness can be as effective as overt power.

Though that scene is the play’s strongest, there are other fine elements in the slow-starting production, directed by Jeannette Lambermont-Morey. As Mortimer, first presented as Mary’s bitterest foe but actually her loyal defender, Matthew Finlan brings passion to the stage, both in his sham allegiance to Elizabeth and his hot, almost religious devotion to the Catholic Mary. His speech about converting to the Roman faith is a highlight it’s clear that this man is a martyr in the making.

Mortimer isn’t the only covert player in Elizabeth’s court. The Earl of Leicester (Graham Conway) has allegiances to both women, emotionally and politically, while even Mary’s warder, Sir Amias Paulet (a believable Zachary Murphy), handles his charge with strict but sympathetic care.

There’s especially fine work by Michael-David Blostein as Lord Burleigh, Mary’s key enemy at court. Blostein’s honeyed voice is as seductive as his demeanour in Burleigh’s attempt to eradicate Mary and her threat to the throne. As Davison, Elizabeth’s new secretary of state, Jesse Beam captures the impossibility of the position in which he’s placed: reading his sovereign’s mind, giving her what she wants even if she doesn’t give precise orders and bearing the consequences of his actions.

Shannon Lea Doyle’s angled set and Anahita Dehbonehie’s attractive, slightly futuristic costumes – Elizabeth, in masculine pants rather than a dress, has the look of a commanding aviator – emphasize stark red and black, colours that feel right for this dramatic production.

One of the most exciting events of the Native Earth Performing Arts season is the Weesageechak Begins To Dance Festival, which turns 27 this year.

The fest, devoted mostly to works in progress by indigenous artists, allows senior participants to work alongside emerging and mid-career creators.

The opening show is Something Old, Something New, Something Borrowed, Something Blue, created by Gloria Miguel with Steve Elm, a piece originally produced by Spiderwoman Theater (November 14 and 16). Also on the first week’s bill are Jani Lauzon’s I Call Myself Princess (tonight, November 13) and Dinah Christie and Tom Hill’s Paddle Song, featuring Cheri Maracle (November 15).

That’s a lot of talent.

Buddies in Bad Times celebrates the work of queer women and trans* folk in Insatiable Sisters, a one-night cabaret curated by Kim Katrin Milan and Gein Wong that explores queer sexuality and liberation.

A few weeks ago we reported that Pea Green Theatre had taken its Fringe hit Three Men In A Boat to the Literature Live Festival in Mumbai.

Now we’ve heard that Why Not Theatre’s making the same journey with an earlier success, Iceland.

Set against the background of the world banking crisis, Nicolas Billon’s play, directed by Why Not’s Ravi Jain, has had a few well-attended runs in Toronto, first in SummerWorks and later as part of the Factory season.

According to Jain, “the production is particularly relevant in India today as the country faces another set of economic challenges around the fluctuating value of the currency. In fact, a number of young Indian playwrights are writing scripts that examine the economic changes within their country.”

Performing in the tour production are Claire Calnan, Shannon Currie and Ali Momen.

Iceland will continue to tour over the next several years in Canada, the United States and the UK.

Organizers have issued a call for the fourth annual Gina Wilkinson Prize, recognizing an experienced female theatre artist who’s making the move to directing from another area of theatre, just as Wilkinson did.

The nominee must be a member of the Canadian professional theatre community and either a Canadian citizen or have permanent resident status. Preference will be given to those who have spent several years in a theatre discipline – acting, stage management, design, administration and so on – and who are now transitioning into directing.

Audiences now have six more times to Hold Mommy’s Cigarette. That’s the name of Shelley Marshall’s play, an honest and funny account of growing up with generations of people suffering from mental illness. Marshall recently performed the play in the Full Bawdy Loft (her own home – appropriate given the autobiographical nature of the show), and now she’s added two more weekends of shows.

The added dates are November 20 to 22 and 27 to 29. November 22 marks International Survivors of Suicide Day. Makes sense, since during the recent remount Marshall received many emails from people sharing stories about their own – or loved ones’ – suicide attempts.