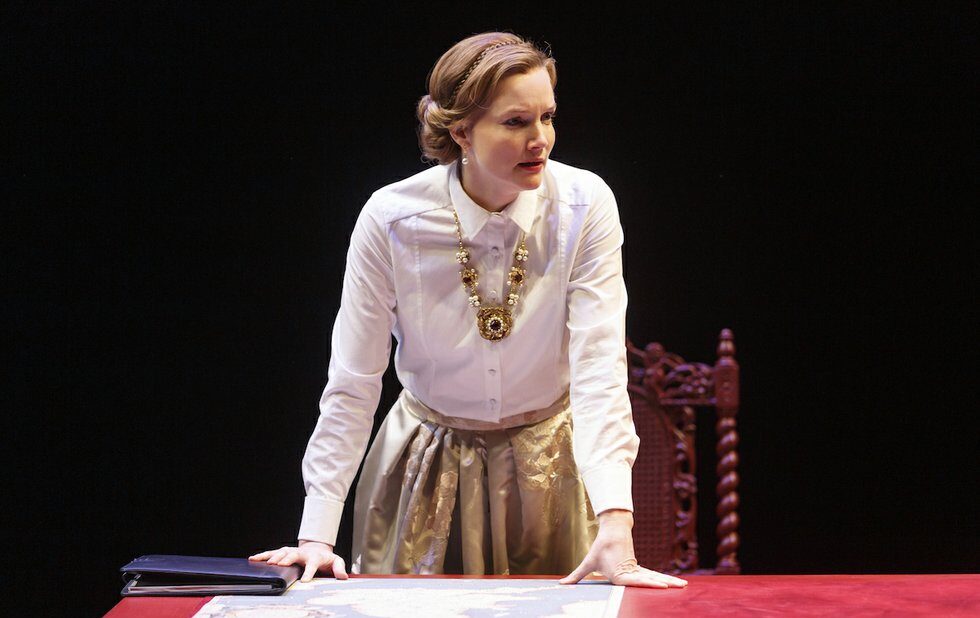 Shannon Taylor plays a ruler who wont be constrained by patriarchal traditions in Mother's Daughter.

Mary I (Shannon Taylor), the first reigning Queen of England, is often known by the nickname Bloody Mary. But Kate Hennigs Mothers Daughter, the very satisfying third play in her Queenmaker series, shows us a complex, nuanced woman tasked with difficult political and moral decisions before she gets blood on her hands.

The play opens in 1553, after King Edward VIs death. A will states that Edwards first cousin once removed, Lady Jane Grey (Andrea Rankin), inherit the crown, not his half-sisters Mary and Elizabeth/Bess (Jessica B. Hill). But Mary rallies support, imprisons her cousin in the Tower of London and ascends the throne.

Still…. what to do about Jane? And then theres her ambitious half-sister, Bess, whos better equipped at playing this politics game. Can Mary trust her?

The queens advisers Bassett (Beryl Bain), Susan (Maria Vacratsis) and Simon (Gordon Patrick White) help her out and provide us with lots of exposition. But the main figure pushing Mary forward is the ghost of her mother, Catalina (Irene Poole), aka Katherine of Aragon, Henry VIIIs first wife. The dynamic between mother and daughter is the scripts most intriguing element, and Pooles imperious, proud Spaniard contrasts beautifully with Taylors more introverted and initially easygoing monarch.

Hennig layers into the script the idea that Marys the child of a messy divorce and so, in her mid-30s, is reluctant to get married, even though she knows she must bear an heir to ensure future succession.

And the title takes on weight as the play progresses and we see, as Mary gains in strength, how much shes inherited from her mother, including some possible physical ailments. Brilliant flashbacks involving Anne Boleyn (Hill again) point to another mother-daughter dynamic. And the plays best passage prophetically looks at a time when female rulers wont be constrained by patriarchal traditions.

As in the two earlier plays in the cycle, The Last Wife and The Virgin Trial, Hennigs use of colloquial language brings Tudor history delightfully down to earth. Sometimes she overdoes it. Calling children kids is one thing, but hearing the expression Lets get the hell out of Dodge sounds silly in any context.

The actors, however, fully inhabit their characters. Taylor makes her journey from unlikely monarch to hard realist convincing and sympathetic, while Poole is sizzling as Catalina an idea emphasized by Kimberly Purtells lighting and Debashis Sinhas sound design.

Hill brings urgency to her two roles, and Bain and Vacratsis make a lively pair, especially when contrasted with Whites intentionally dour Simon.