Many recipients talked about police violence, inequities in the theatre industry and going beyond allyship 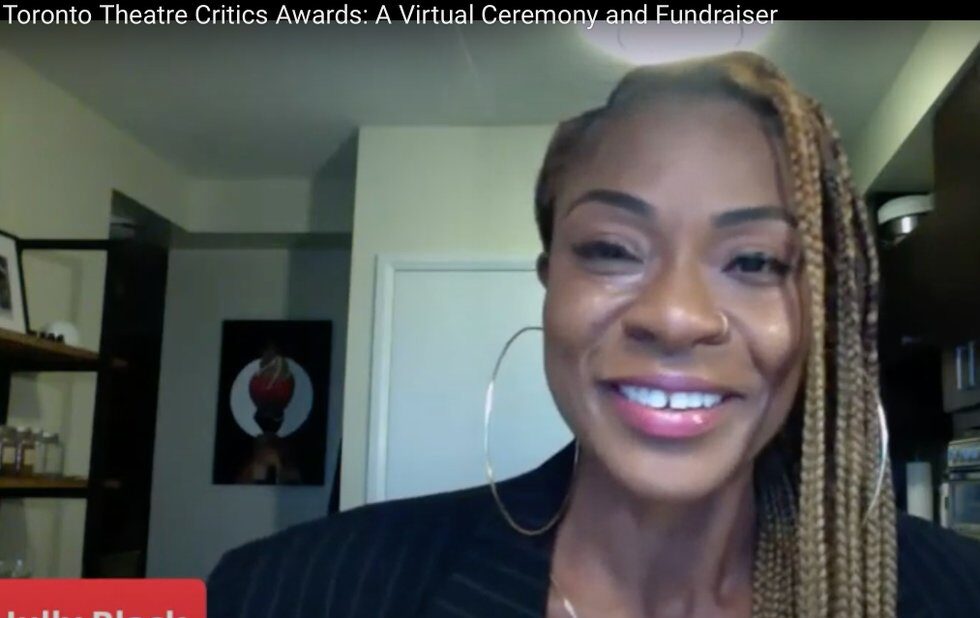 The awards, now in their 10th year, celebrated the best work in a shortened season. (Full disclosure: I’m one of the members.) Streamed live on the YouTube channel of the AFC (formerly the Actors Fund of Canada), the event was a fundraiser for the AFC.

The night’s big winners were Outside the March and Crow’s Theatre’s production of The Flick, Obsidian Theatre’s Pass Over and the musical Caroline, Or Change, a co-production between Obsidian and Musical Stage Company.

Many of the most effective acceptance speeches were proudly political.

Thomas McKechnie, co-writer of The Jungle, which won the TTCA for best new Canadian play, recited the names of three people – Regis Korchinski-Paquet, who fell to hear death while Toronto police were in her apartment in May D’Andre Campbell, who was shot and killed by Peel police in April and Ejaz Ahmed Choudry, who was fatally shot by a Peel Region police officer last Saturday.

He went on to say that artists themselves were to partly to blame for the police violence by creating “copaganda.”

“At these times, people often say, ‘How can they get away with this?'” said McKechnie. “And one of the answers is: artists help them.

“Artists help them when we write, direct, perform and produce uncritical media about the police. When we make TV shows and films about police officers and their heroic activities, and very few about police victims. Lots about how tough their jobs are and how the bad ones always get rooted out. But very few stories about people like Regis Korchinski-Paquet, an Afro-Indigenous woman from the Caribbean who came to this country and was killed by its agents.

“Who writes [Korchinski-Paquet’s’] story?” he continued. “Does the CBC pick it up, or do they just keep running reruns of Rookie Blue? Our Black, brown and Indigenous communities are crying out for justice. And I want to know if you can hear them. If you can hear them, I need you to promise me one thing. No more copaganda. Ever. We can and will and must tell stories about the police, but we aren’t a PR firm for racist murderers any more. We aren’t just artists. We are citizens.”

Herbert, co-winner of the TTCA for best lead performance in a play for Jesus Hopped The ‘A’ Train, acknowledged the recent conversations and changes in the Canadian theatre scene, using the metaphor of being awake.

Herbert mentioned yesterday’s news story about a plane flying a banner with White Lives Matter over a soccer game in England.

“We are awake and the people who oppose what we’re trying to do – which is to have a better world, I think and I hope, at least that’s what I’m working on – are awake,” said Herbert. “And everybody’s making themselves heard. I think we need to continue that. I think we’re behind in this particular field, and we have a lot of work to do. Some of it painful. Theatre companies, artists in general – we can’t go back to sleep.”

Many recipients shouted out director Philip Akin, who was himself a double TTCA winner for his direction of the plays Actually and Pass Over and is stepping down from being artistic director of Black theatre company Obsidian next week.

Akin ended his moving acceptance speech by quoting from the racist white character in the powerful Pass Over.

“I’m left with all of these great conversations we’ve had tonight about where we are and Black lives matter, etc., but I keep going back to Alex McCooeye’s last word at the end of the play. He details all the things that have happened, and then he sighs and says, ‘Anyways…’ Anyways. I think we are in a moment approaching where a lot of people are going to go say, ‘Anyways.’ And I think that we as artists need to not do that. We have to find a way to prevent ‘anyways.’ To prevent that big sigh, the shake of the head and the moving away. We have to find a way to keep creating, driving and challenging and doing everything we can to keep at the forefront of our work the power of theatre.”

One of the most moving acceptance speeches of the night came from R&B singer-turned-musical theatre star, Jully Black, who was one of two winners of the TTCA for best lead performance in a musical. Her mother passed away shortly before she took on the role of a domestic worker in the musical Caroline, Or Change, and she said Musical Stage Company and co-producer Obsidian Theatre became the family she needed.

“My mom was a domestic, and that’s how she was able to help us to actualize our dreams,” she said, with tears in her eyes. “Agatha Gordon, I say her name loud and proud – Agatha Gordon who worked for $1.65 an hour here in Toronto.”

Black said the musical helped her understand Blackness, but it also made her realize that whiteness “is a conversation that needed to be had – and needs to be had more and more.

“Privilege and fragility – all those things I recognize it’s time to stand in the gap for one another.  It’s time to listen, learn and take action.”

She ended by giving a message to the white community.

“Be a co-conspirator,” said Black. “Allyship is cool. But try being a co-conspirator… if I need freedom, go fight for the freedom, and I’ll drive the getaway car. Let’s do that. Let’s be that type of game changer and history maker.”