Toronto Caribbean Carnival will be a food truck festival in 2021

As COVID-19 curbs the parade, the Toronto Caribbean Carnival is pivoting to a foodie event with steel pans and masqueraders 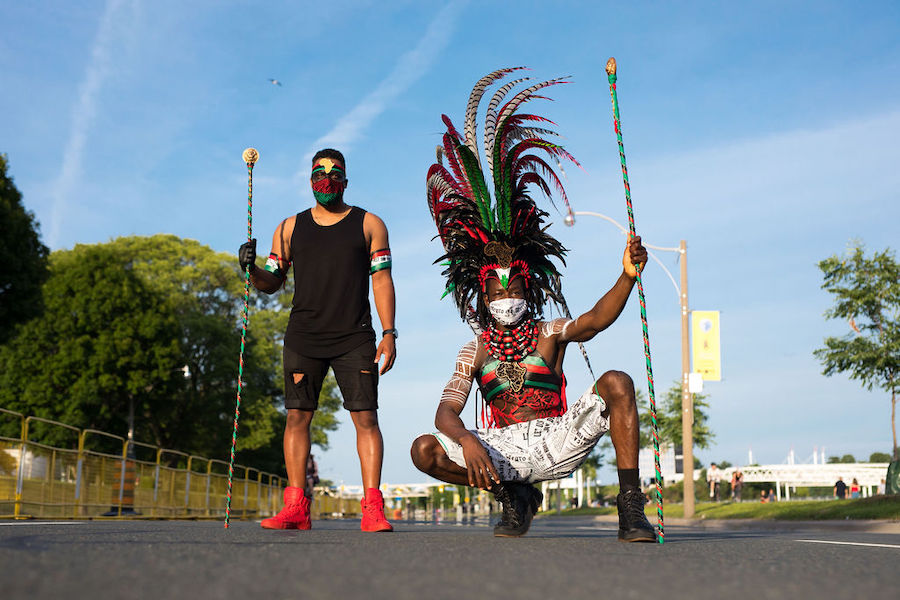 Christian Miller and Omotayo Damilola wear SugaCayne's Bloodline costumes on Lakeshore Boulevard, where the Toronto Caribbean Carnival’s Grande Parade would have been held were it not for COVID-19.

The Toronto Caribbean Carnival is pivoting from mas band trucks to food trucks in 2021, as the COVID-19 pandemic curbed yet another Grand Parade.

At a virtual media launch on June 15, Toronto Caribbean Carnival organizers described plans for the 2021 event, which will largely be a foodie event celebrating West Indian flavours. A month-long Carnival Eats Passport program will promote local restaurants – and give participants the chance to vote on the best patty, roti or doubles and such – while leading up to a food truck festival taking place on July 31 and August 1.

The plans are a modest return to live events for the Toronto Caribbean Carnival, which had to settle for a virtual parade last year, connecting masqueraders from their homes during live DJ sets and performances.

“Look out for a mini carnival at this food truck festival,” says Andre Newell from the Toronto Caribbean Carnival.

There are already a dozen food trucks registered to participate with more still undergoing the submission process.

The two-day Carnival weekend food truck festival is currently pegged to take place from 11 am to 4 pm but that should change as the Festival Management Committee continues to negotiate location and other details with the city. The fest was originally meant to be a drive-thru event but is progressing to a more interactive and lively cookout atmosphere as Toronto advances on the vaccine front and brings down COVID-19 numbers.

“You can get out,” says Toronto Caribbean Carnival’s spokesperson Andrew Ricketts. “You can go to any of the food trucks that you want. We’re going to have some music playing. We don’t want it to turn into a party, but at the same time, come out and experience some Caribbean culture, try the different food and have some Carib beer.”

On top of the food trucks, there will also be pan, a programmed Toronto Caribbean Carnival broadcast and hopefully masqueraders from the city’s band showing out new costumes featured at First Lap, last month’s virtual band launch.

“We want to keep the spirit of the Carnival alive,” says Toronto Caribbean Carnival’s communications manager Andrew Ricketts. “And we can’t do that without the bands because they are the heart of the festival.”

Those ready to start dining on Caribbean culture now can register for the Carnival Eats Passport, which is essentially a loyalty program offering prizes for the most points collected at curated local restaurants. And they can participate in voting for their favourites among the local businesses, because we really need to expand the best patty conversation away from TTC stations – no disrespect to Warden.

Toronto Caribbean Carnival is also emphasizing the history behind the festivities this year. In our cover story last year, SugaCayne band leaders urged for a reconnection with the political history behind Carnival and its celebration of emancipation. “At its heart it was a protest,” SugaCayne’s Candice Dixon told NOW.

This year, Emancipation Day will be recognized across Canada for the first time.

“We want to make this a big celebration,” says Newell. He says Toronto Caribbean Carnival has been collaborating with all the other Caribbean organizations to educate and entertain, keeping the history and the relevance at the forefront during various events from flag raisings to a CN Tower lighting ceremony.

Earlier this year, Toronto Caribbean Carnival also announced the creation of a virtual timeline that will collect testimonies, photos and videos from the masses recounting its history since 1967. “We would love to keep this going for years to come and make this the most collaborative and comprehensive database of Caribbean history in Canada,” says Newell.

Newell and Ricketts tell us to expect more developments and details, which will be published on TorontoCarnival.ca at the end of June. At the Carnival launch, hosted by Brandon Gonez on Instagram Live, Mayor John Tory and Doug Ford promised a Grand Parade for Toronto Caribbean Carnival’s 2022 edition.