Toronto's patios are back in business – with a few new social distancing measures in place. Here's where to drink and dine al fresco near you 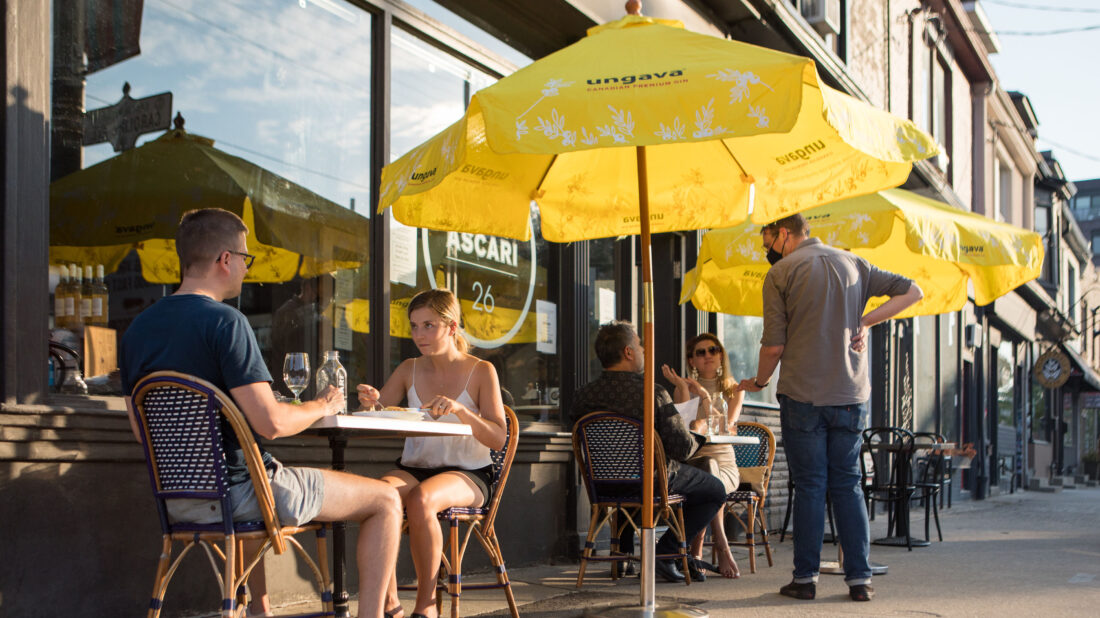 The original Leslieville location now has a cute side deck, while the King West offshoot has a sunny streetside area perfect for people-watching. 1111 Queen East & 620 King West, ascarienoteca.ca

Time to get reacquainted with that willow tree – the Danforth’s best-hidden spot for beers and burgers is back open. Reservations accepted. 143 Danforth, allens.to 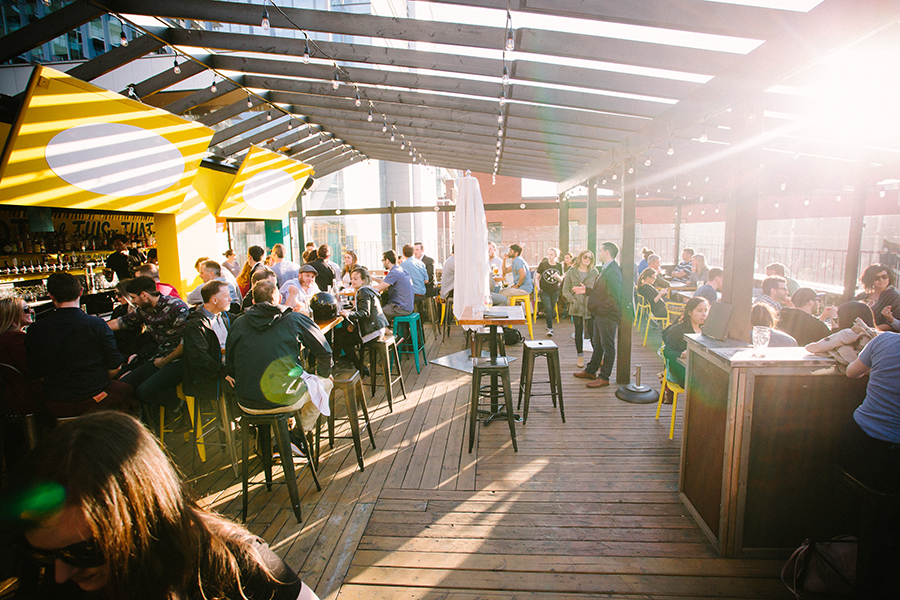 This beer bar, home to one of downtown’s best rooftop patios is back with a host of new safety procedures, including screenings upon arrival. Reservations available. 137 Peter, barhopbar.com 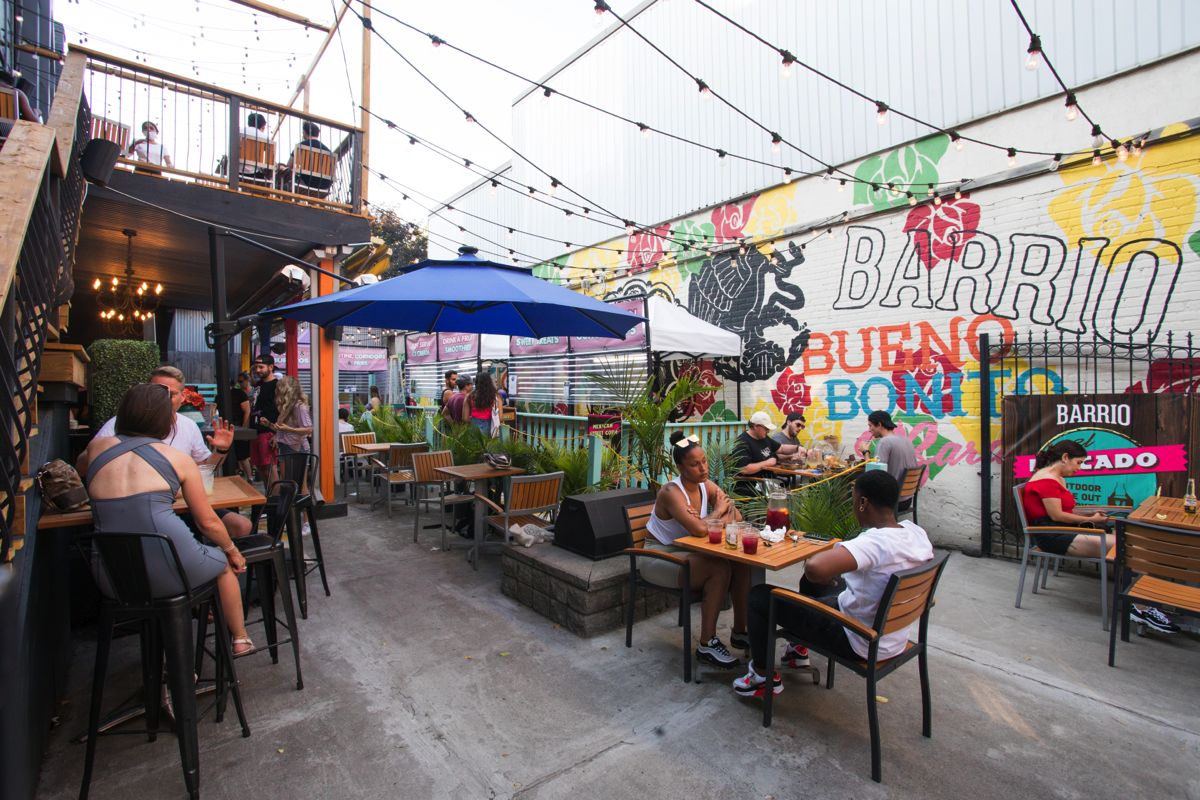 The Leslieville Mexican joint has converted a chunk of its patio into a limited-capacity open-air market complete with carnival-inspired snacks like pickle-lemon soft serve – but you can still pull up a chair and enjoy the air. 884 Queen East, barrioonqueen.com 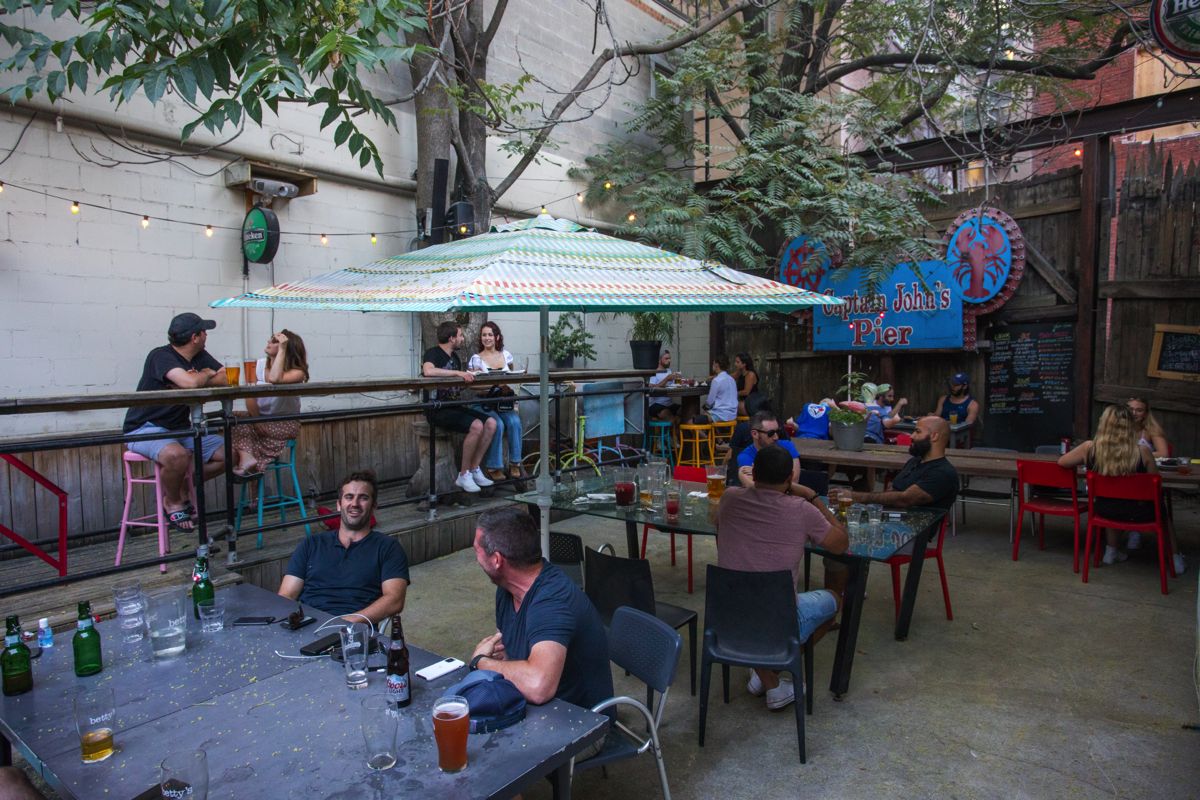 If you’ve been anywhere along King East for the past two decades, this lovably grungy watering hole (and its backyard space) need zero introduction. 240 King East, bettysonking.com 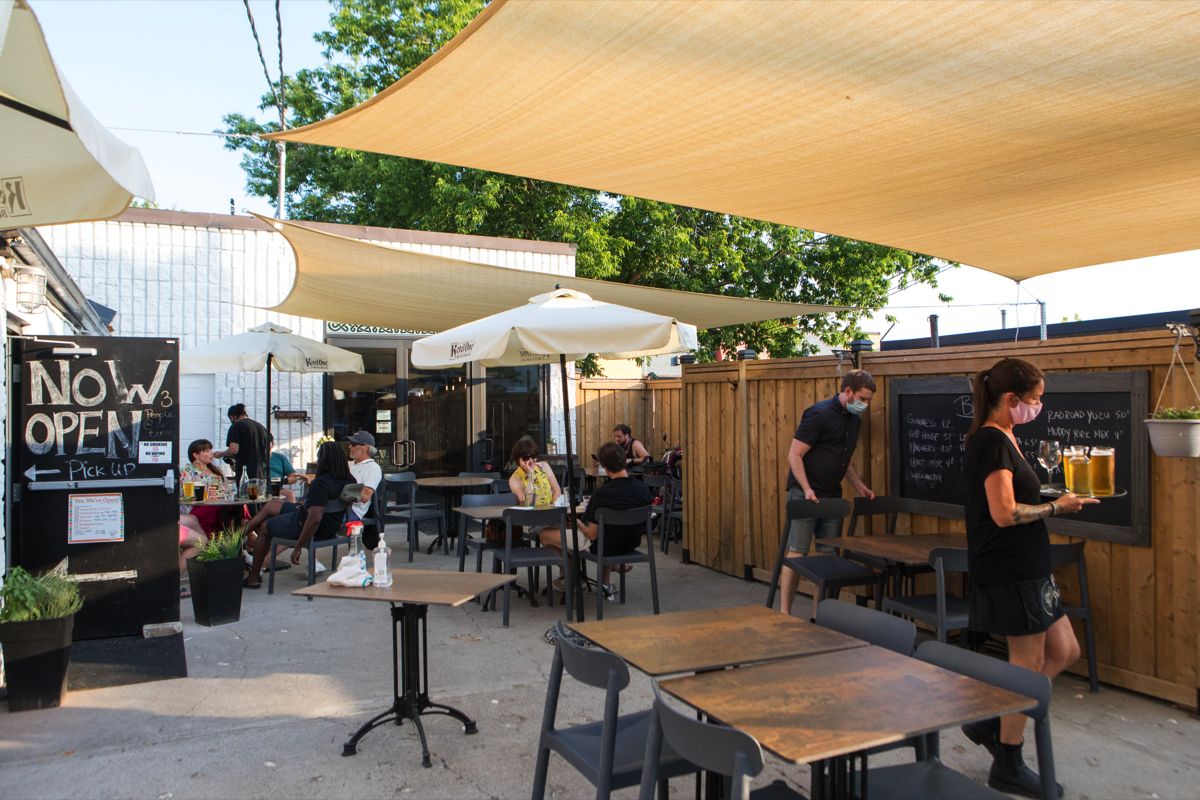 Formerly known as the Ceili Cottage’s front patio, this sunny front yard space (minus the yurt) is under new management, though the cozy Irish pub vibes remain. 1301 Queen East, theburren.ca 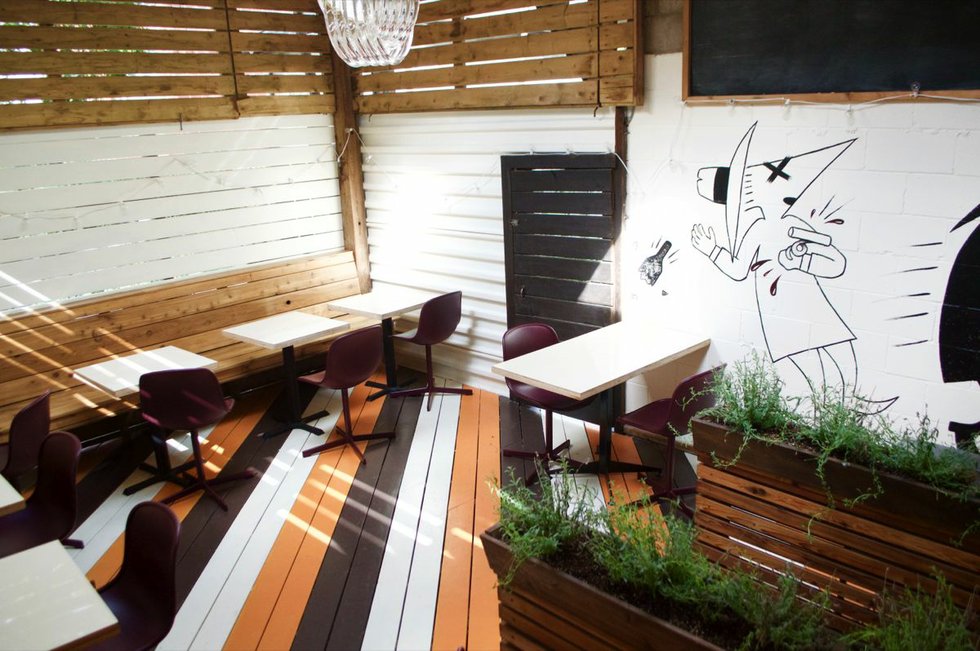 Still known in the hearts of many as the Black Hoof’s back patio, Vendetta’s backyard space (now with a swishy striped paint job) is open for all your pasta and orange wine needs. Reservations available. 928 Dundas West, @barvendetta

The enclosed back patio at this Greek-inspired snack bar, complete with picnic tables and string lights, is one of Bloordale’s best-kept secrets. 1226 Bloor West, @bar_neon 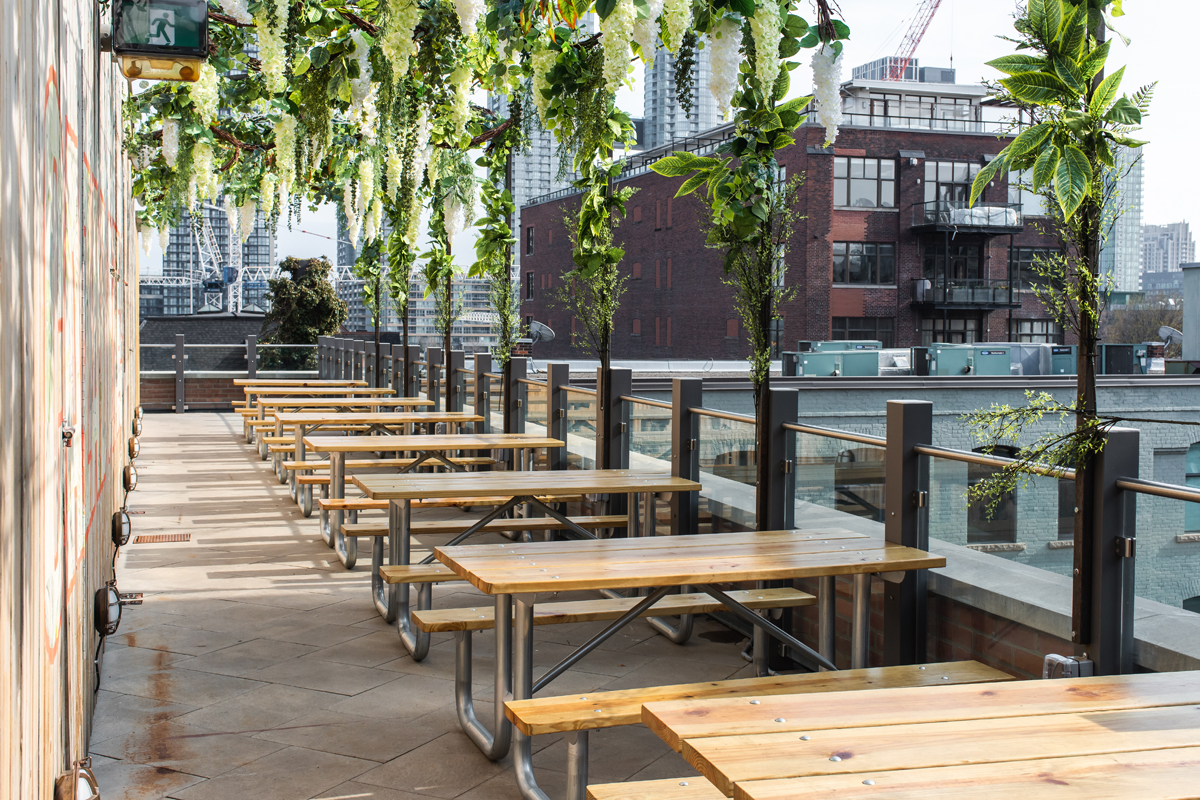 What’s the mathematical opposite of eating Kraft Dinner on your couch during quarantine? Probably scarfing a lobster grilled cheese on the Financial District terrace at this schmancy downtown spot. 66 Wellington West, mcewangroup.ca/bymark 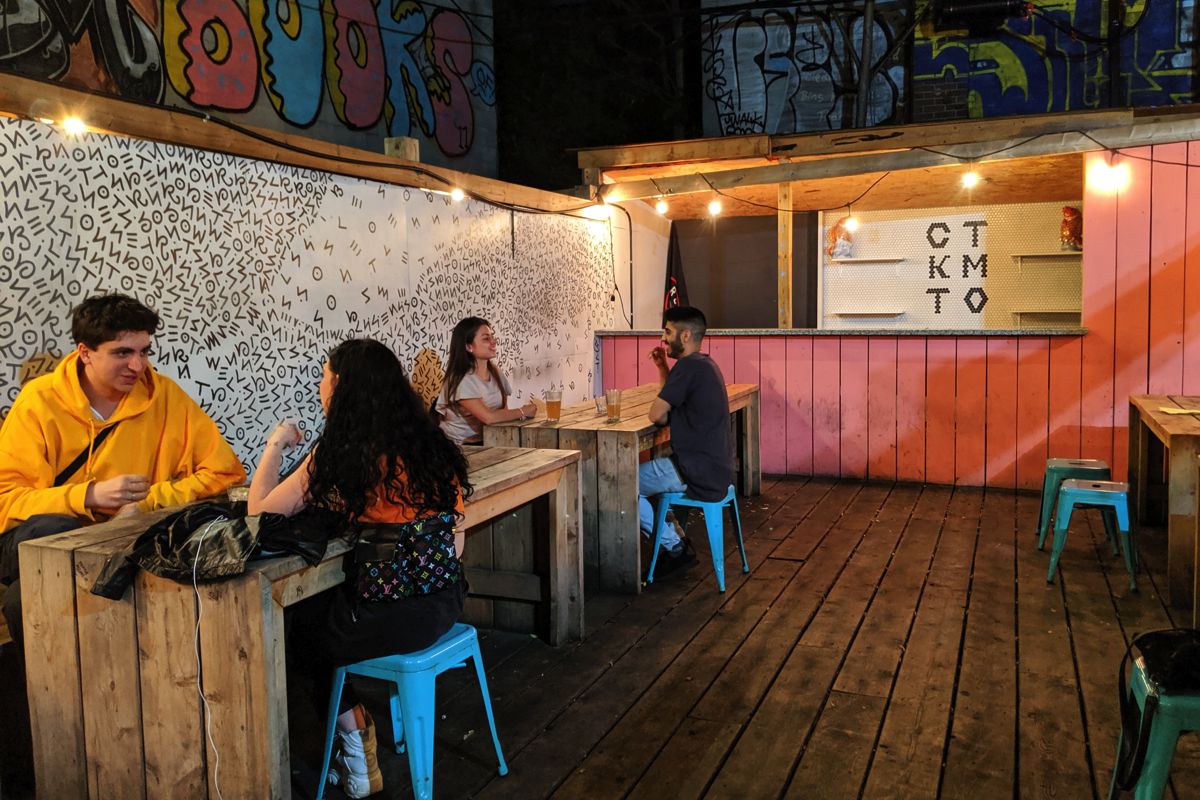 Though the crowded weekend BBQs and dance parties are on pause for the time being, you can still soak up the sun at this Kensington staple (and its new Queen West offshoot). 60 Kensington, 1186 Queen West, @coldteabar

One of the Distillery’s biggest, most bombastic patios (read: ample room to spread out) is back open for tacos and Margaritas. 18 Tank House, elcatrin.ca

Fresh off a menu relaunch this past winter, Sociale is serving Kyle Rindinella’s elegant interpretations of Italian faves on a cute,
bistro-chaired side patio off Dundas West. 1288 Dundas West, sociale.ca

A Cabbagetown fave, this tucked-away, vegetation-shaded side patio is the perfect place to dig into a wood-fired pie. 12 Amelia, famelia.com

It tends to get overshadowed by sister spot Madame Boeuf, but the wood-panelled back -patio at Anthony Rose’s Middle Eastern tavern is a destination in its own right. 414 Dupont, fatpasha.com 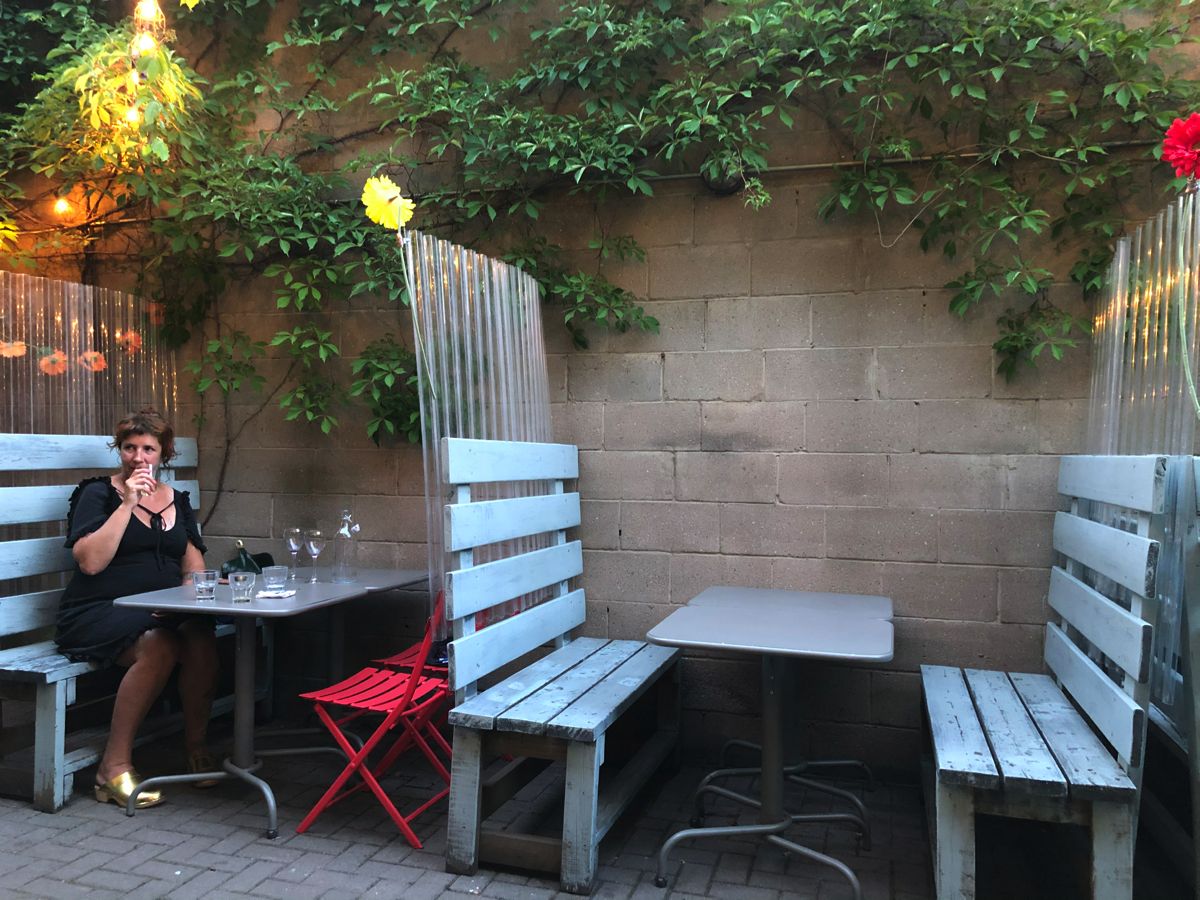 Pull up a booth (now with plexi shields!) at Tom Thai’s Ossington bistro and grab a ceviche and a bottle off the lengthy wine list. 207 Ossington, @foxleyonossington

While the Bellwoods offshoot of the taqueria has become all-vegan Tacos Rico since last summer, the original location – and its charming plant-laced back area – are still truckin’. 1330 Queen West, grandelectricrestaurants.com

The arcade machines are, unfortunately, off-limits at this Geary pizzeria – but the beer and North of Brooklyn pies are still available on the shaded side patio. 229 Geary, thegreatergoodbar.com

It’s a shame we can’t really enjoy the striking indoor setting at the new five-floor Gusto in Corktown – but the wood-fired pizzas, mortadella sandwiches and clever cocktails make up for it. 501 King East, gusto501.com

The four rooftop patios at this Yorkville pub are hot real estate, even when dining inside with the AC on is actually an option. Reservations accepted. 142 Cumberland, hemingways.to 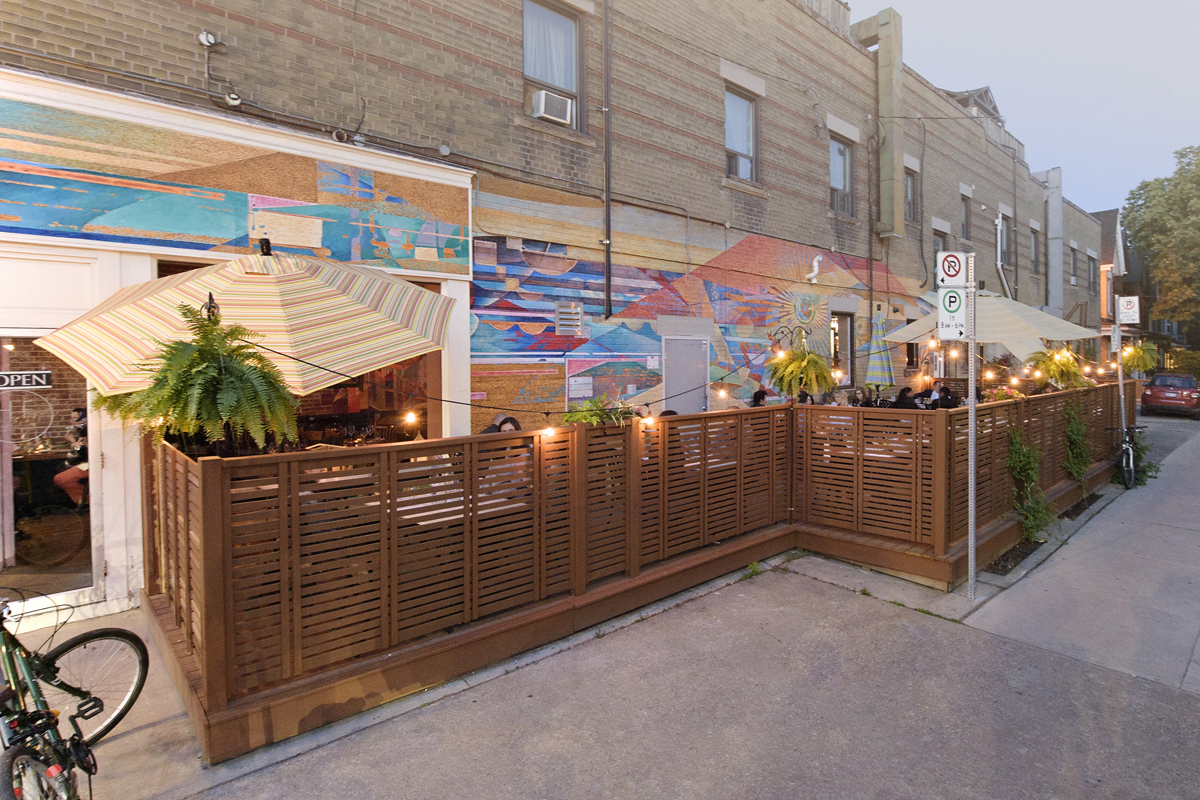 With over 100 selections available, this Harbord bar (and its colourful side patio) is a magnet for cider lovers. Reservations accepted. 119 Harbord, herfathers.ca 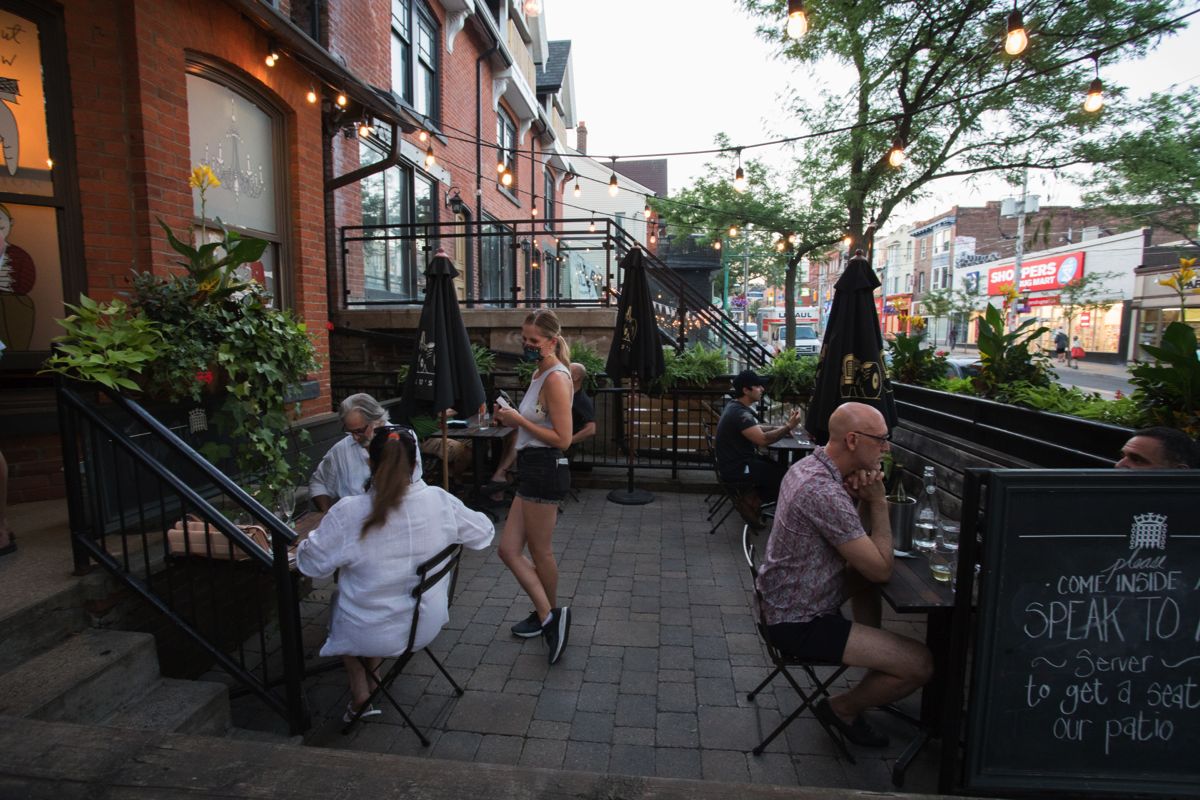 It’s the moment Cabbagetown beer geeks have been waiting for: both of the patios at this beloved Parliament pub are open, with service available through their takeout window. Reservations accepted. 454 Parliament, houseonparliament.com 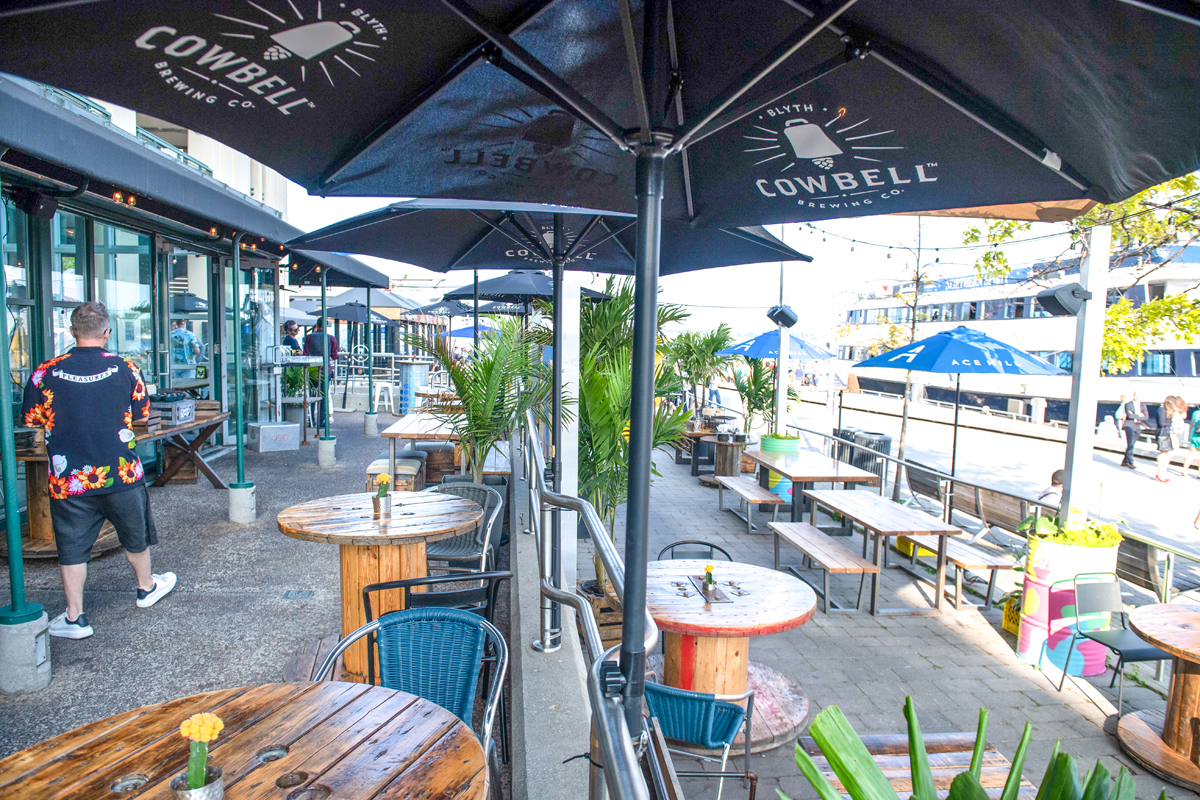 Punctuate a waterfront walk with some fried chicken, tacos and beer at this lakeside spot. Reservations not currently accepted. 207 Queens Quay West, joebird.ca

Pull up a picnic table and drink some Conductor’s Ale fresh off the line at this west-end brewery (which – fun fact – is located in a former trash incineration facility known as “the Destructor”). Reservations not currently accepted. 150 Symes, junctioncraft.com

Thanks to the addition of a cute streetside patio, you can now dig into Rob Bragagnolo’s paellas and chocolate-dunked churros al fresco. 433 King West, labora.to

Nothing says summer in Little India like diving into a sizzling biryani on the sizeable outdoor deck at this family-friendly North Indian-Pakistani spot. 1365 Gerrard East, lahoretikkahouse.com

One of our best new brunch spots of 2020 is bringing its modern-bistro menu to a cute adjacent patio that aims to whisk you away to the south of France. 642 King West, lapinoubistro.com

The rooftop patio – possibly the only one on all of Dundas West – at Craig Harding’s California-inspired eatery was well over a year in the making. Reservations available. 849 Dundas West, lapalma.ca

Beers and birds (specifically, fried and whole rotisserie chickens) are the draws at this Junction Triangle spot – but the cute picnic tables on the patio don’t hurt either. 1588 Dupont, lovechix.ca 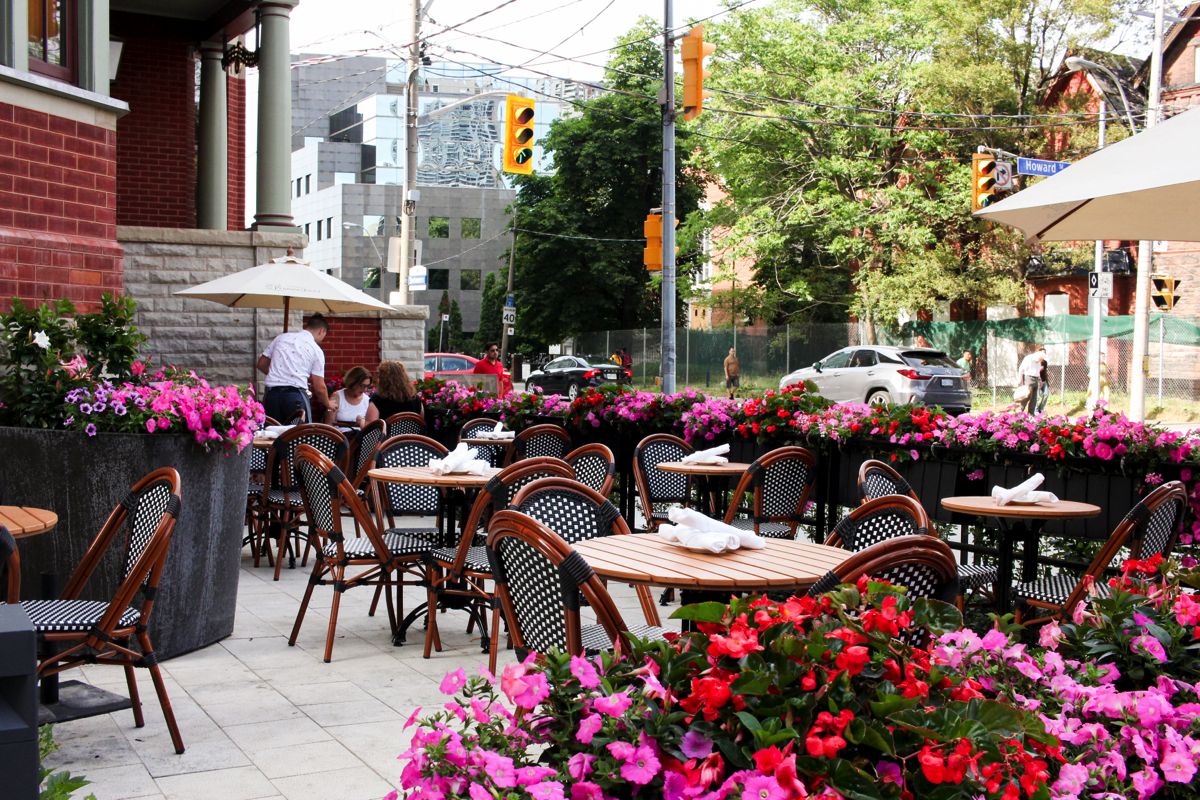 This French bistro – which approaches almost Wes Andersonian levels of cuteness – has a sunny patio with caned chairs and tons of blooming flowers to match. Reservations accepted. 592 Sherbourne, maisonselby.com 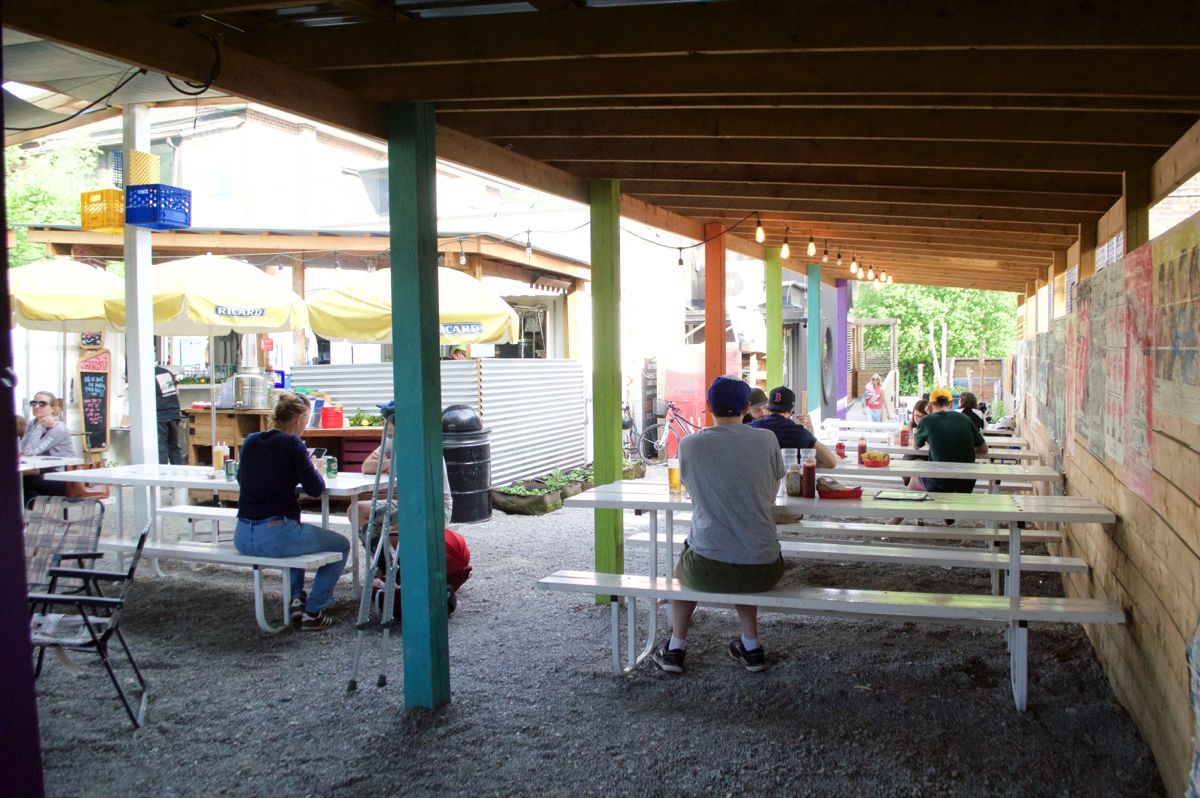 Rebranded as “Madame Boeuf and Bottle” to account for its to-go booze sales, Anthony Rose’s outdoor kitchen is still doing burgers and fries – but the bocce and lawn games have been put on pause. 252 Dupont, @madameboeufandbottle 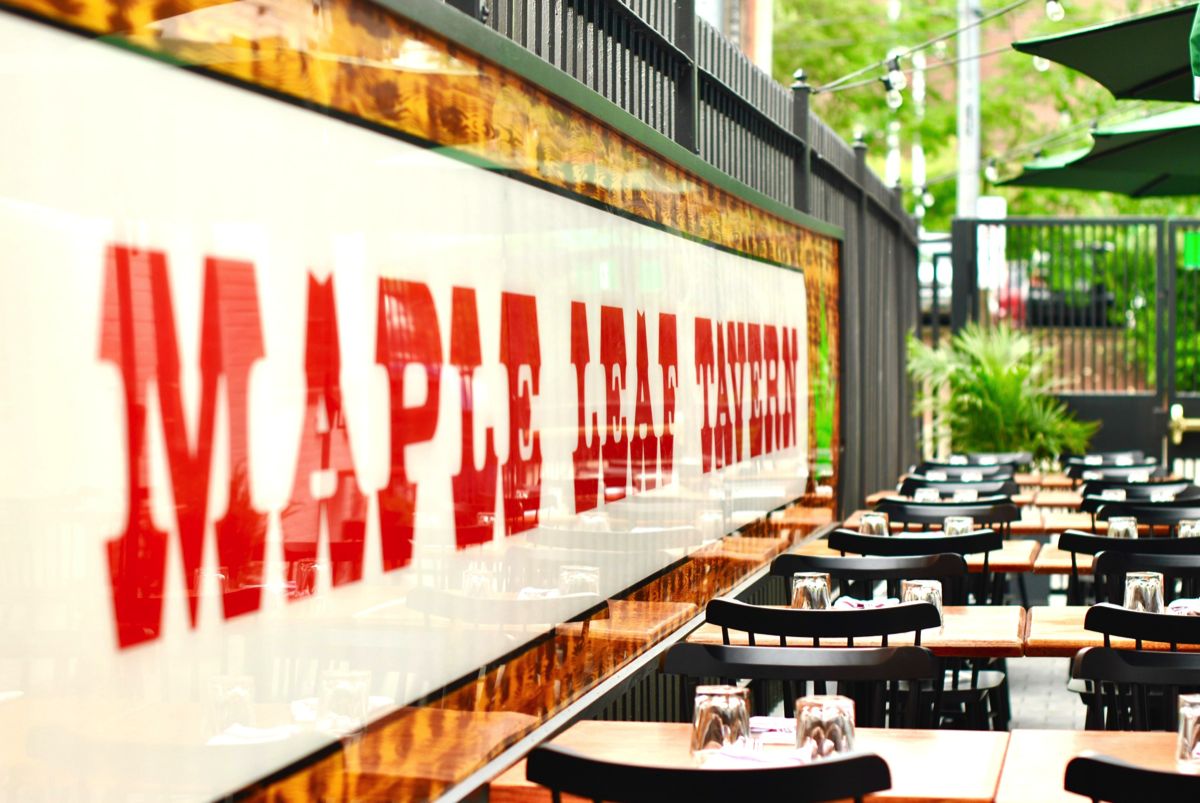 Dine on burgers and classed-up pub fare on the side patio at this former dive bar (where the old sign from the original bar still hangs). 955 Gerrard East, mapleleaftavern.ca

Sushi by the water sounds like a match made in heaven – and the plush atmosphere on this upmarket sushi spot’s patio, decked out in bench seats and lanterns, takes things to a whole new level. 10 Bay, mikutoronto.com 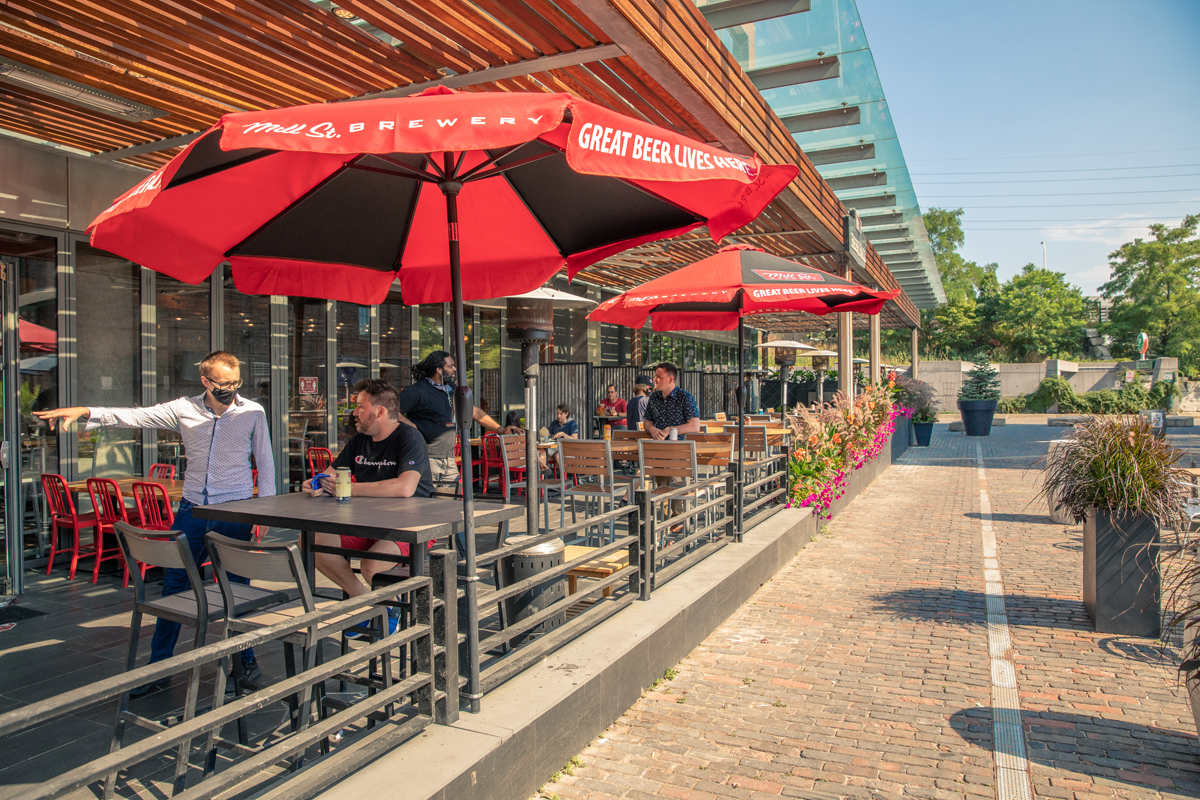 After pivoting to selling meat pies during the pandemic, downtown’s favourite English pub and football bar has reopened its charming rooftop patio – and is adding sidewalk cafe space. 35 Elm, queenandbeaverpub.ca

It’s been in business for over 40 years, but this cafe and Thai restaurant’s walled back patio still feels like a secret garden hidden in plain sight on Queen. 208 Queen West, queenmothercafe.ca

Pull up a picnic table on the brand-new wooden deck at this Junction Brewery and knock back their cult favourite Armed N’ Citra IPA (or a dozen other brews). 100 Symes, rainhardbrewing.com 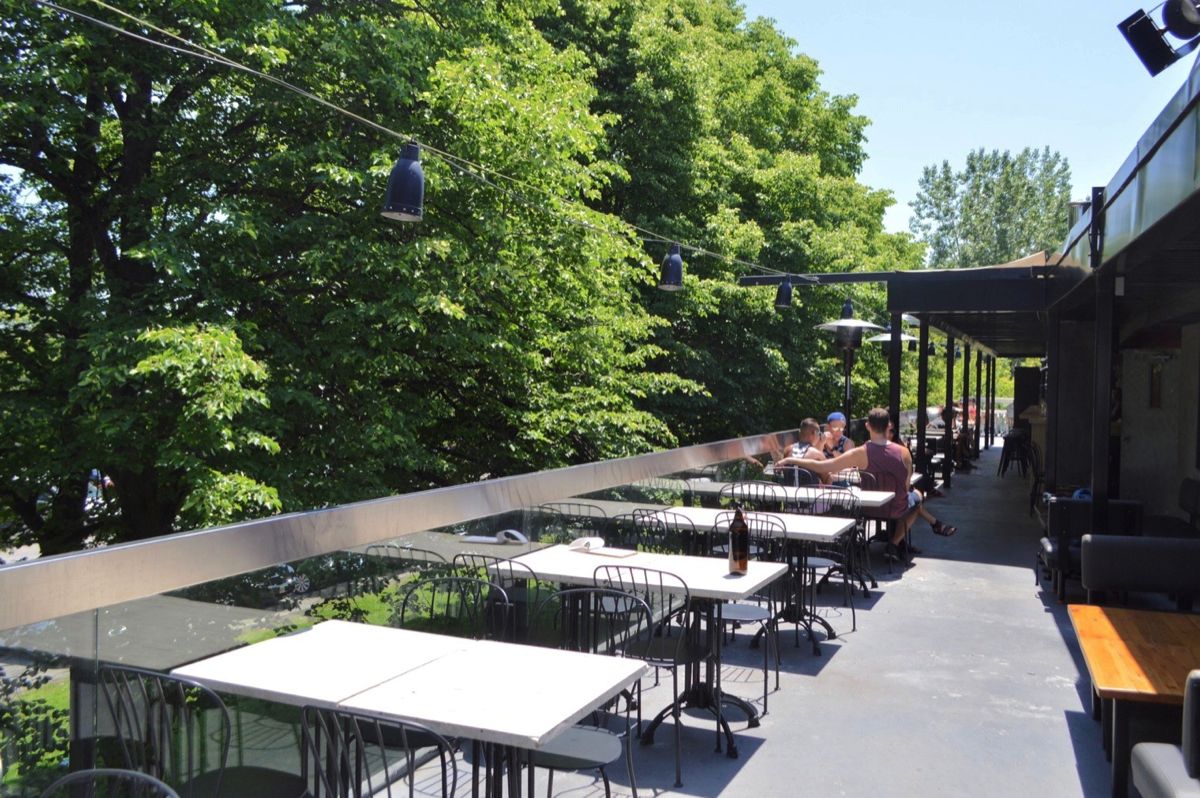 The gorgeous, tree-shaded rooftop patio at this Leslieville brewery is one of the east end’s  best-kept secrets. 1001 Eastern, rorschachbrewing.com 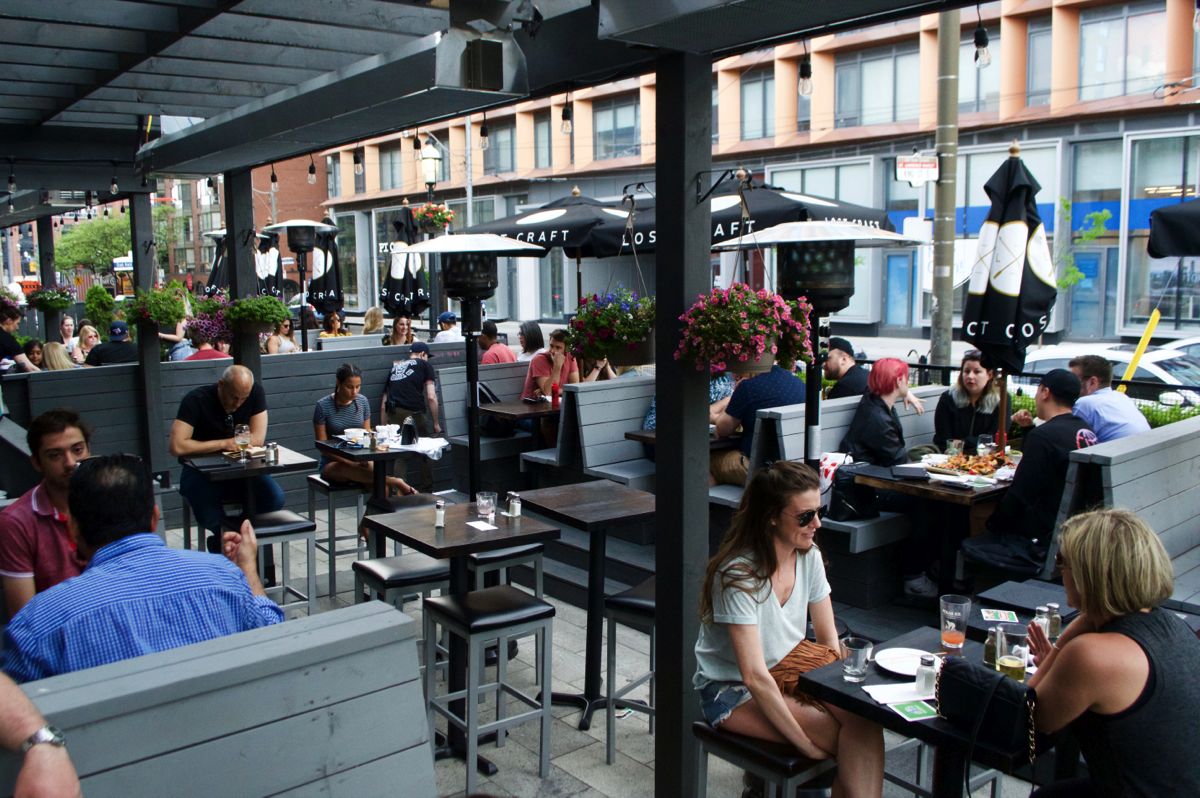 If a giant Caesar with a bunch of stuff skewered onto it sounds like your idea of a good time, head for this Vancouver-by-way-of-King-East sports bar.
107 King East, scoreonking.com

Get your people-watching in (to the sound of live Greek music) at the flower-lined patio on this Danforth favourite. 500A Danforth, soulas.ca

Nerds, it’s time to leave the basement and get yourself some vitamin D (and maybe some brunch) on this geek-themed bar’s sizeable front deck. 580 Church, stormcrowmanor.com 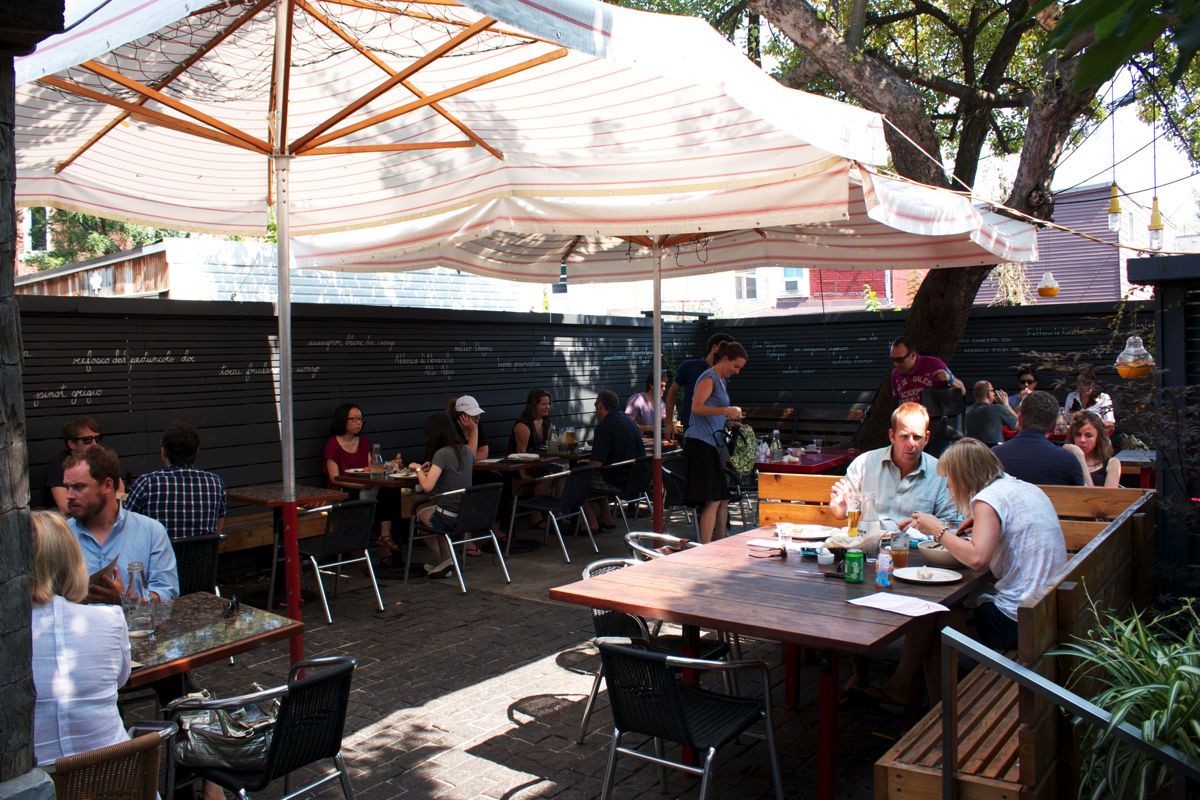 The leafy back patio at the original Terroni has been a Queen West hangout for years (though the backyard at Terroni Adelaide and the rooftop at Bar Centrale – both of which are also open – are pretty spectacular too). Reservations available. 720 Queen West, terroni.com 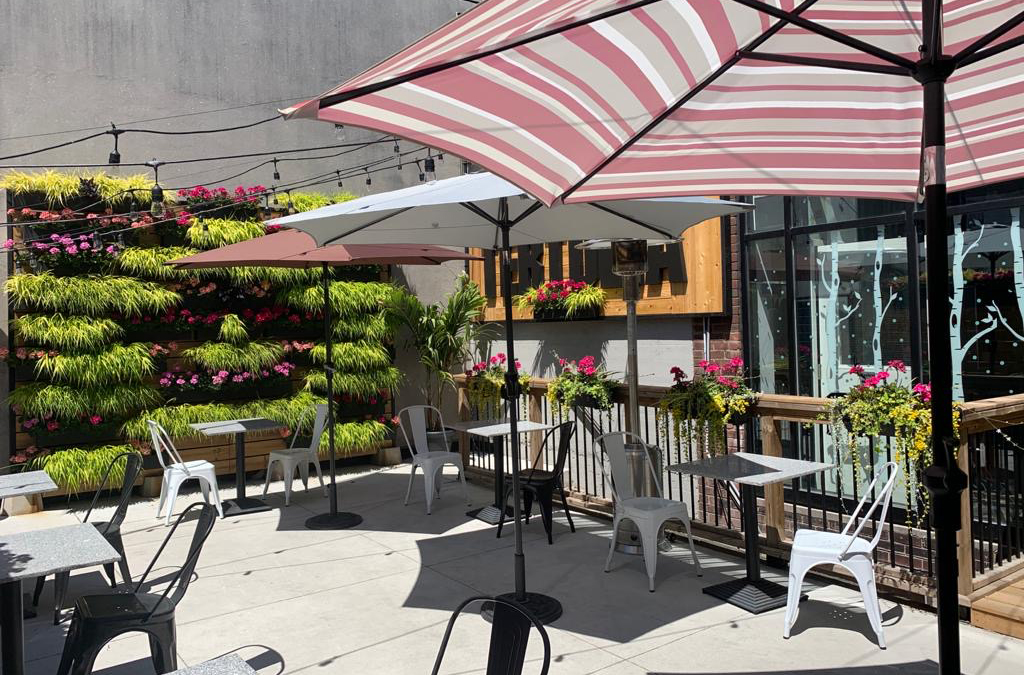 We predict the walled-in back patio at this newish espresso bar, with its string lights and stunning floral wall, is about to become hot real estate in Riverside. 711 Queen East, @tertuliaespressobar 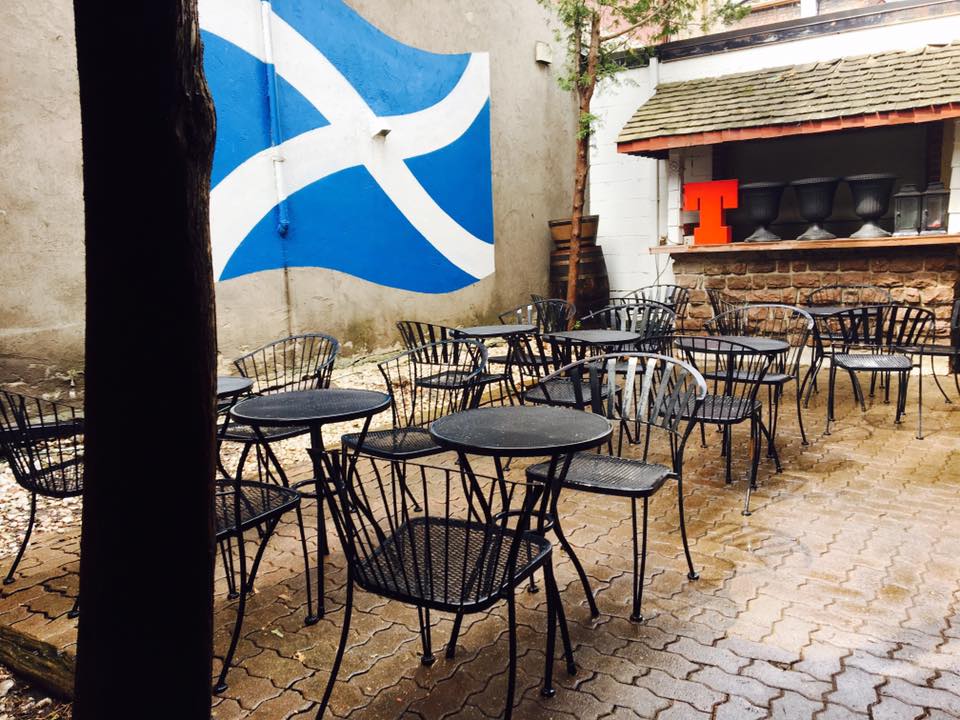 Dine on haggis in the shadow of a massive Scottish flag while sampling your way through this College Street pub’s enormous collection of whiskeys. Reservations only. 856 College, thecaledonian.ca

The sunlit rooftop patio at this swank hospitality group’s flagship seafood restaurant is one of the finest in town. 10 Temperance, thechasetoronto.com

This restaurant and entertainment complex has teamed up with Pai to serve Nuit Regular’s vibrant Thai eats on their new streetside patio. 225 Richmond, thefifth.com 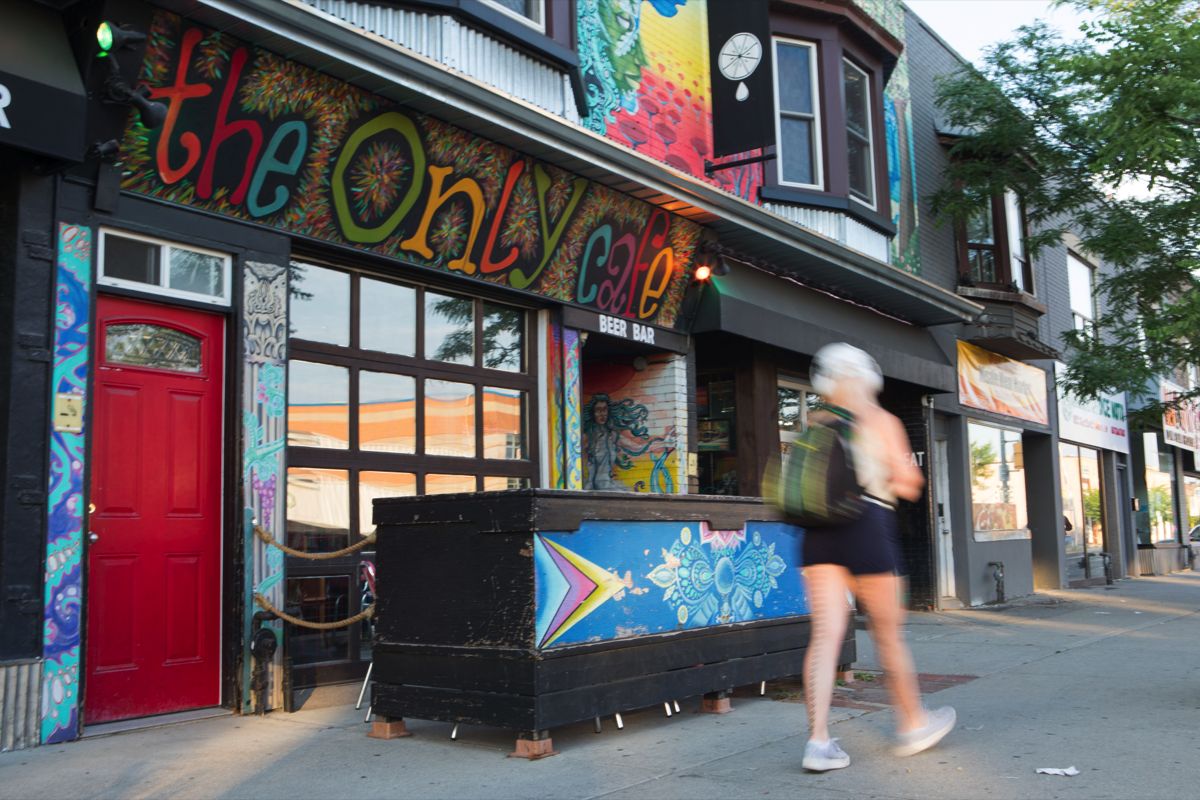 Beer nerds in the know love the craft taps and cans at this Danforth spot; beer nerds who are really in the know head straight for the fenced-in back patio. 972 Danforth, theonlycafe.com 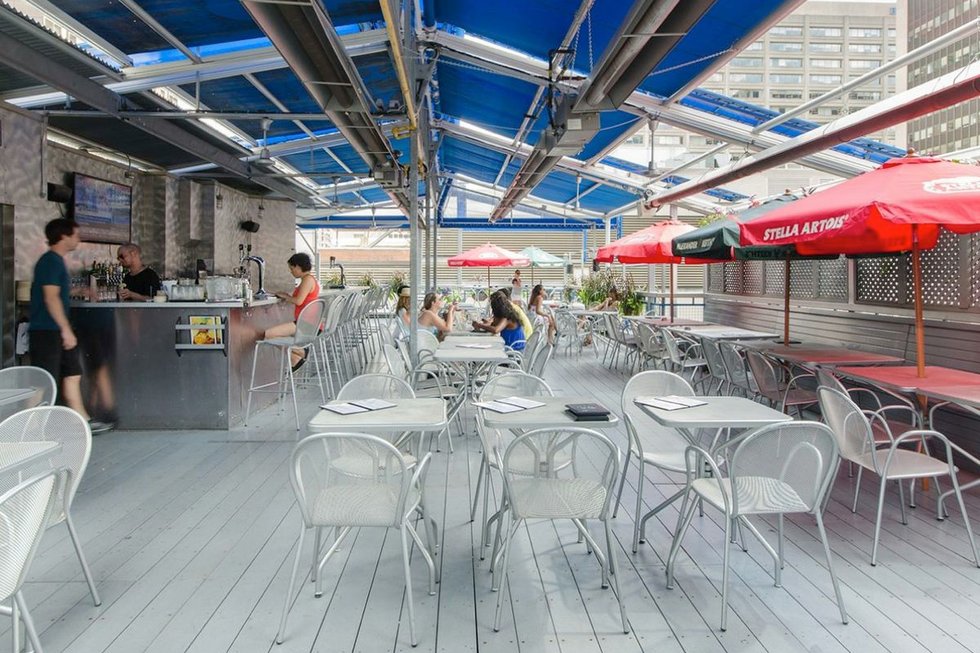 Summer in Yorkville means pints on the rooftop at this multi-floor watering hole. 22 Cumberland, thepilot.ca 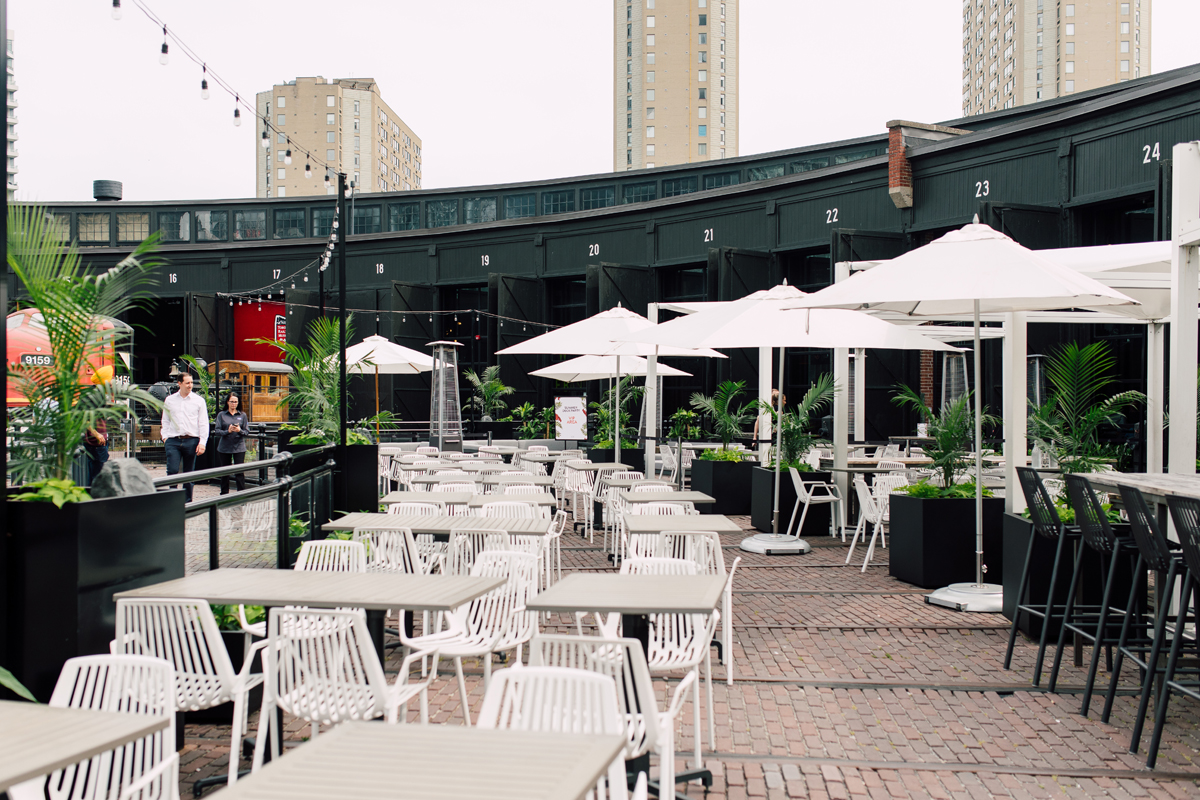 The entertainment complex’s patio (which seats a socially-distanced 128) offers plenty of room to spread out. Reservations available. 255 Bremner, therecroom.com

This massive waterfront patio can now accommodate even more socially distanced diners thanks to its takeover of the waterfront concert stage. No reservations. 235 Queens Quay West, theslip.ca

One of Parkdale’s favourite momo restaurants is also home to a cute, spacious fenced-in back patio. 1544 Queen West, tibetkitchen.ca