Drink and dine above city streets at these rooftop patios 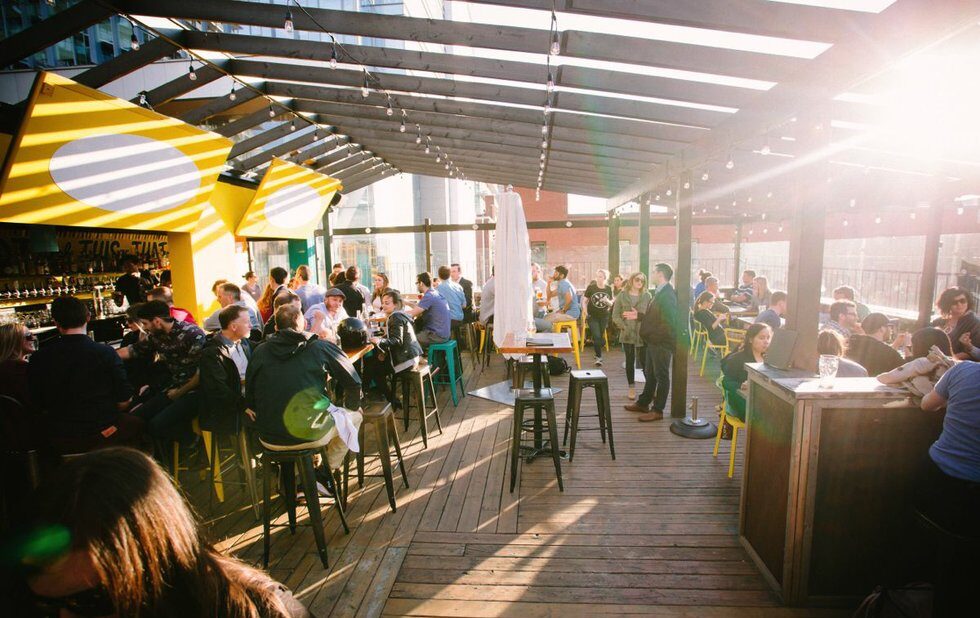 Though the squishy front patio at Bar Hop’s OG location will forever hold a place in our hearts, Bar Hop Brewco’s rooftop, which seats 135 thirsty souls, is like a magical beer garden in the sky. The house beer program, overseen by Matt Bod, brims with geeky brews, like the freshly released and summer-ready Shell Game, – a bright magenta blend of barrel-aged farmhouse ales with hibiscus – and a forthcoming collab with Short Finger, a Gose fermented with kveik (an old-school Norwegian yeast cultivar) and Brett, spiced with Indian coriander. 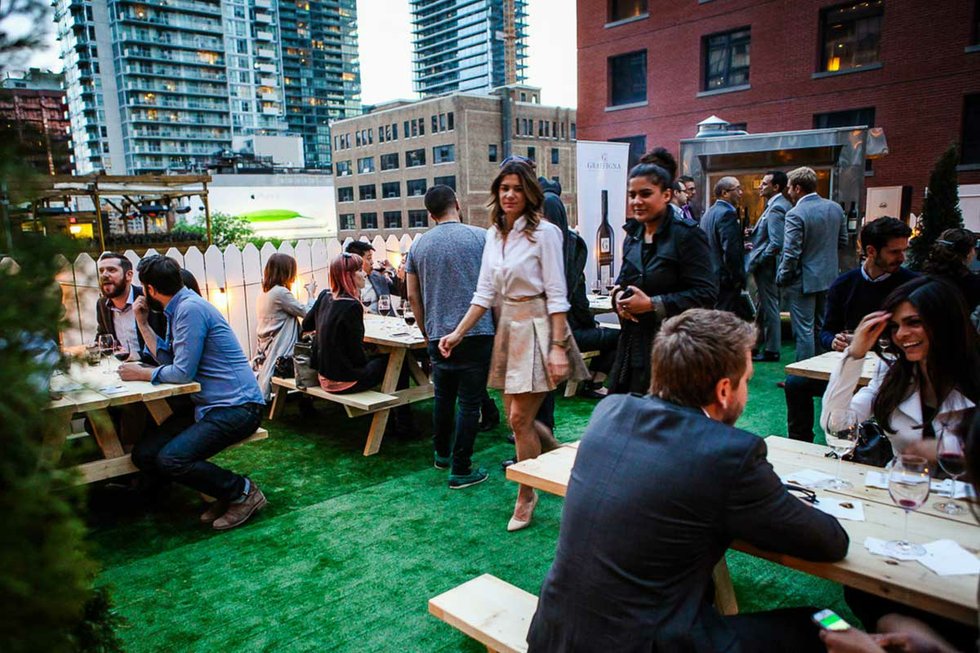 If I described Mascot’s Beer Garden as a millennial playground in a panopticon of condos, that might come off as a not so subtle hint to avoid it at all costs – but don’t. Come here to kill a Sunday afternoon with a pack of pals or descend after work to wash away mundane office dramas with a fresh, crispy house-brewed pilsner. In the interest of longevity, there’s plenty of shade to be found under giant yellow umbrellas while stuffing your face with spare ribs and ceviche. If there’s something special to celebrate – like I dunno, life – 5-litre Mascot mini-kegs are a genuine menu item. 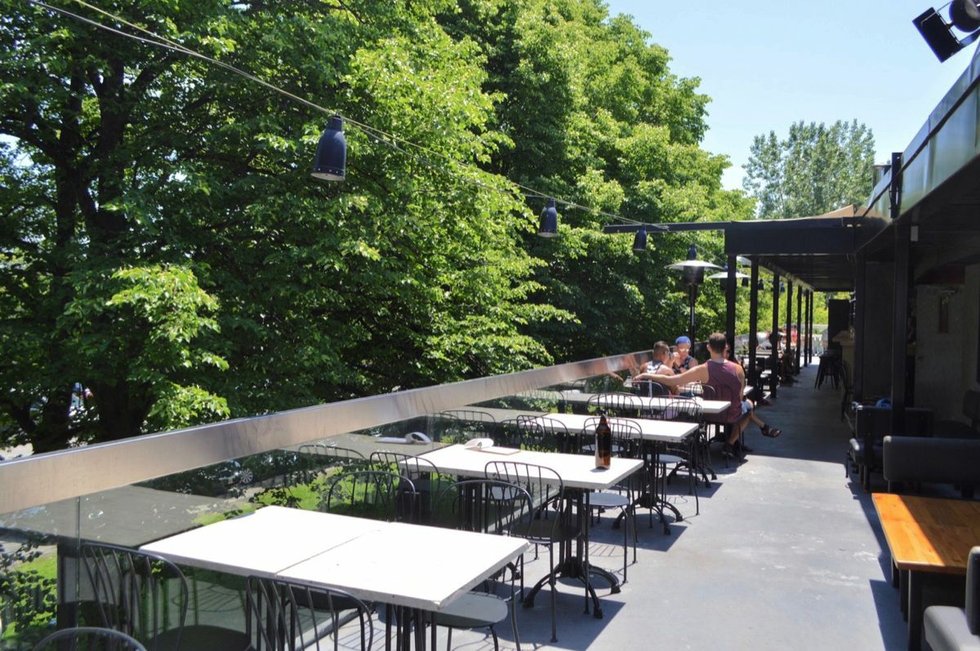 Some patios sacrifice relaxation at the altar of supreme coolness, but not this one. Suspended in tree tops and steeped in sunshine, Rorschach’s park-side terrace offers one of the most stress-free scenarios imaginable. Toss into the bucket of pros the fact that Rorschach brews pretty tight beers – from mixed fermentation sours and grisettes to pilsners and a host of IPAs, which switch up weekly – and pours 16 of them on tap at any given time. Paradise found. 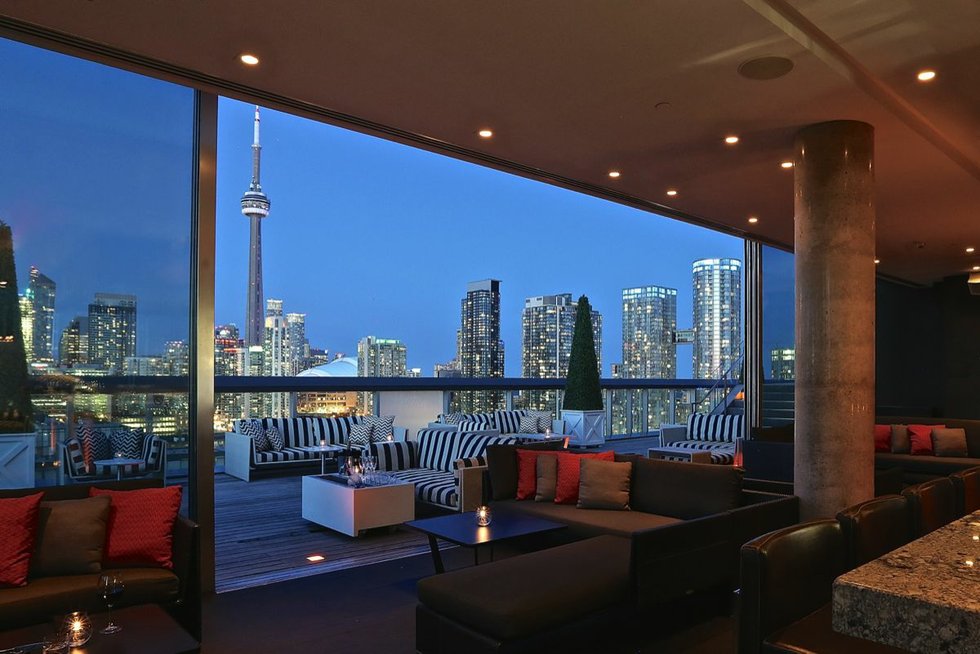 After every sporadic visit to the Thompson’s slick top floor, I slink off disappointed but validated for not riding 16 floors up to the top of Toronto more often. I can’t afford that level of high life on the regular, but damn if the view isn’t worth bleeding a premium for once in a while. Five years in, the rooftop lounge is still a classic Toronto perch, with platinum people-watching and a classier crowd than the Jabronis-Gone-Wild vibe you encounter on proximal rooftops. It’s worth saving and suiting up to treat yourself to a few skyline cocktails this summer. 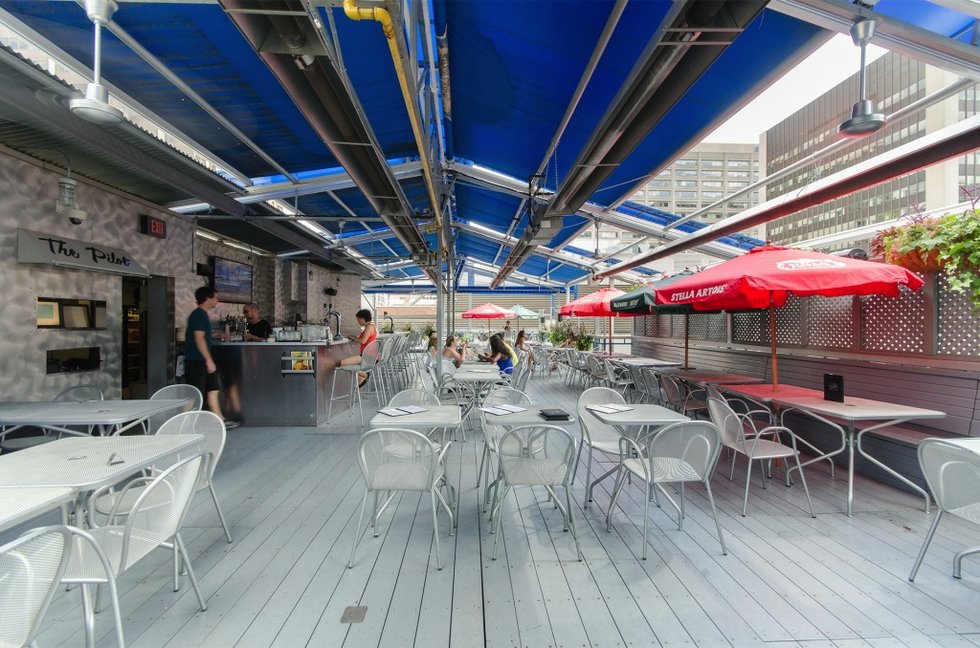 Amid a flurry of new and slated openings, Yorkville seems to be changing face faster than the folks who strut its skinny, super-car-lined avenues. Evolution evades the stalwart Pilot, though, which moved into the neighbourhood in 1972 long before its Cumberland address was desirable, let alone luxe. Skirt the dim downstairs and climb straight to the city-famous 185-seat Flight Deck. The mostly macro beer lineup has a few solid Ontario indie breweries like Side Launch and Collective Arts thrown in, but if there’s a time and place to guzzle Labatt products, this is probably it. Calling the wine list basic is generous, but house pours are $7/glass so shut the hell up and order a side of ice for your pinot grigio and a trough of nachos, too. 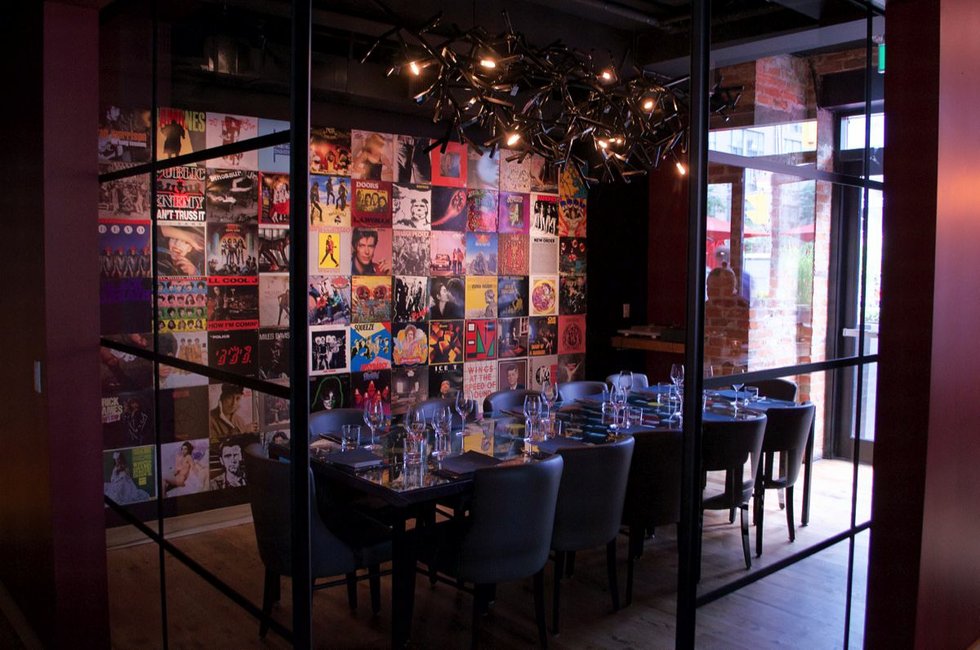 The “I can’t believe I’m crossing the DVP to party” crowd has been noticeably (and mercifully) silent since the Broadview made its grand entrance last summer. The hotel, born from a lavish renovation of what was once Jilly’s, is crowned with not one but two rooftop decks – a chill second-floor terrace packed with cushy patio furniture and lit by a massive neon sign, and a show-stopping south-facing patio on the seventh floor. 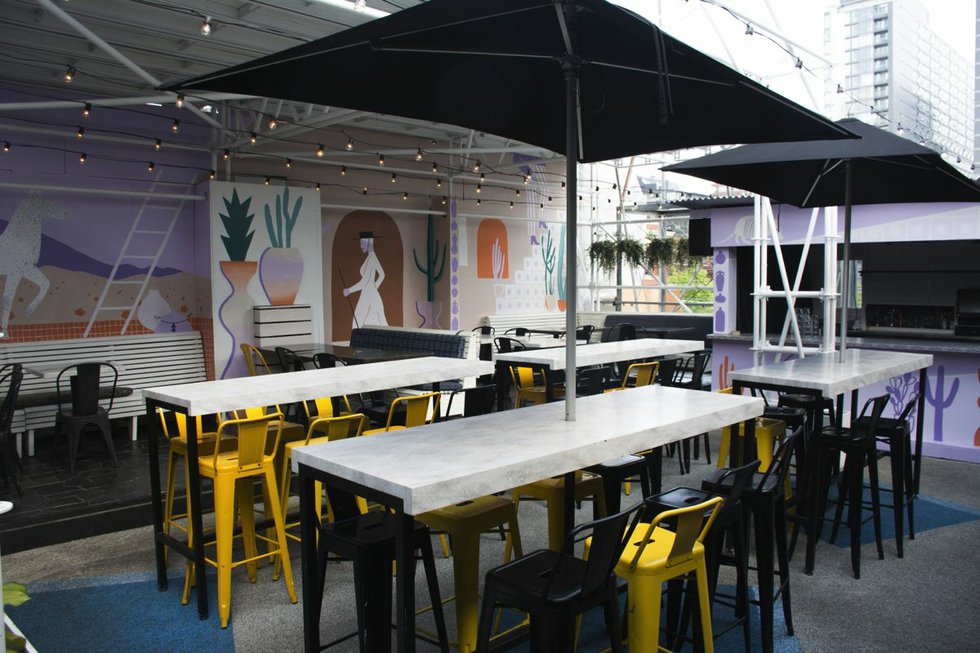 Part of the fun of Queen West’s fave rooftop perch is that it’s reinvented, with an all-new look and menu, every patio season. This year, the deck will be mostly covered – blame the adjacent construction as the hotel is renovated. But though there’ll be less direct sun, the tropical vibes will still be strong thanks to a massive collection of live plants and vines snaking their way across the patio, as well as a new southwestern-inspired installation by artist Louise Rymer. 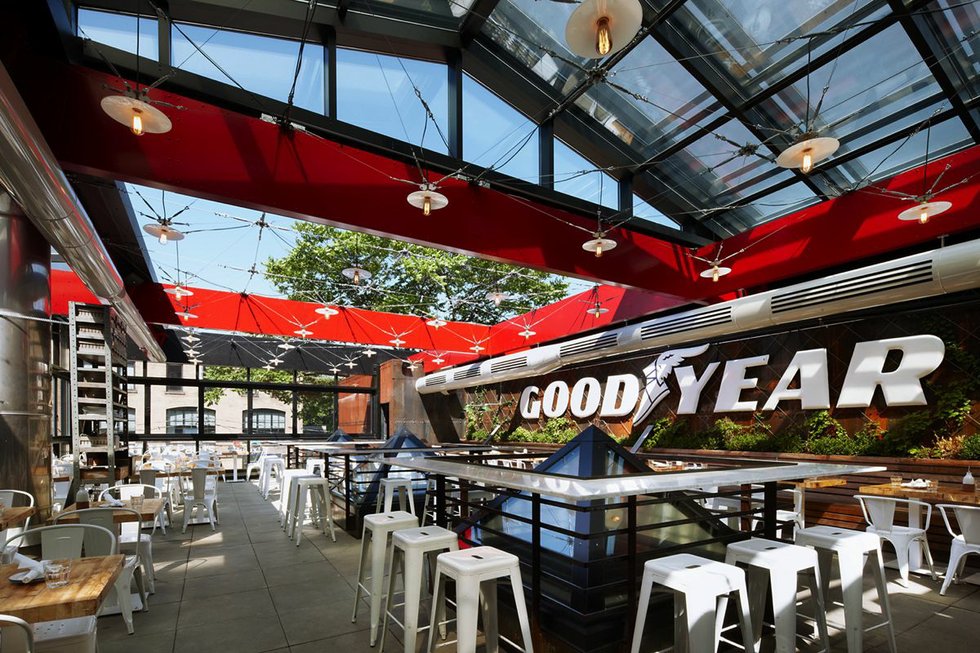 The Rogers Centre aside, Gusto might be home to Toronto’s favourite retractable roof. The industrial-chic trattoria makes the most of its three-floor space (once home to an auto garage, as the massive salvaged Goodyear sign hammers home) with an airy upper deck that’s a favourite destination for King West business lunches, post-work drinks and sunny brunches. There’s also a ground-floor patio that handles some of the inevitable overflow. Oh, and the pizza ain’t half bad either! 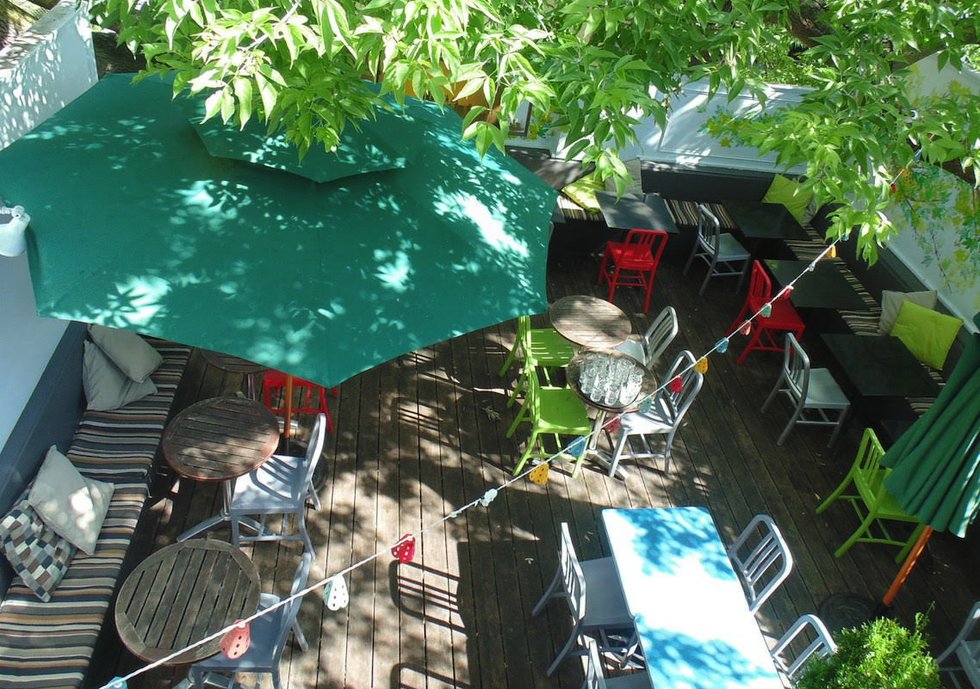 There’s something special about the southern stretches of the Annex: those beautiful houses, the shady trees, those fancy-pants Palmerston street lights. That quiet magic gets blown up to Secret Garden-level proportions on the rooftop deck of this omnivorously oriented brunch and dinner spot, where a formidable maple tree winds its trunks through the walls of a cozy patio. That’s what gets the crowds in the door, but the affordable drink specials and sustainably sourced menu suited for carnivores and vegans alike keep ’em coming back. 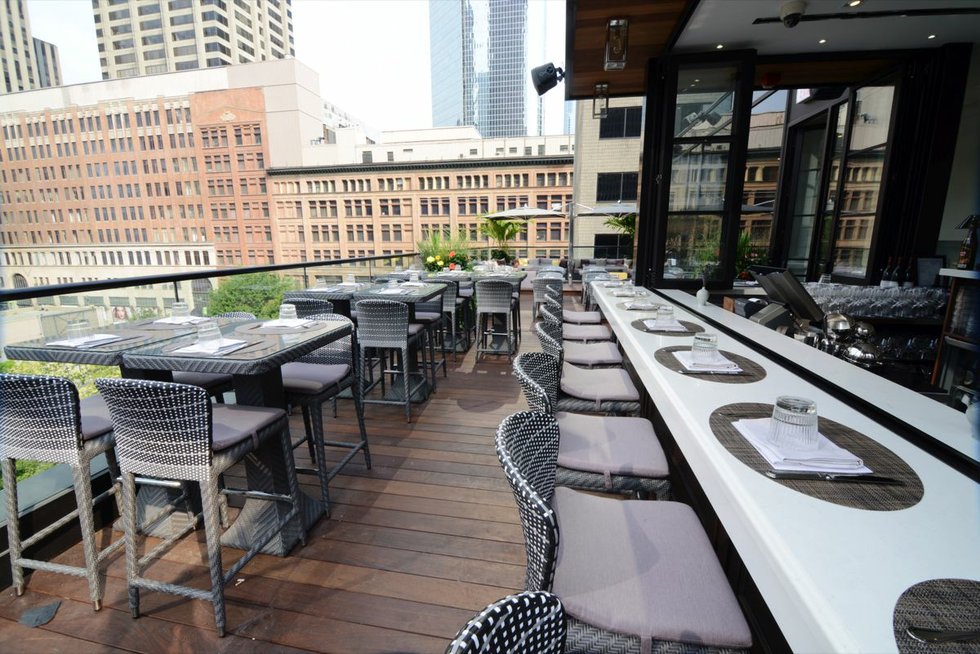 The Chase’s penthouse patio has been the Financial District’s post-shift watering hole for five years strong, but it likely isn’t a heavy-circulation haunt unless you don a suit and/or terrifically painful designer heels five days a week. Keep an open mind, though – frolicking amongst suits can be fun on occasion, especially when there’s champagne involved and things get gregarious. Also of note: the perma-packed roof gets generous sun till late in the day, and cocktails, while pricey, are beautifully presented and tasty, too. 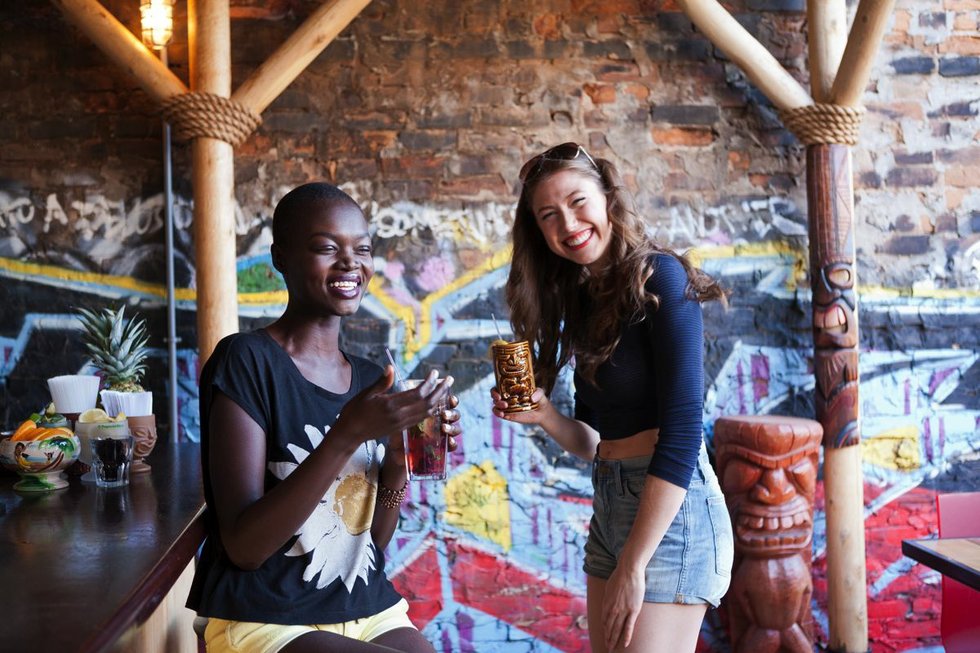 Even though Toronto’s most lovably grody rock venue installed this rooftop deck six years ago, its hidden-away location high above the bustle of Queen West means its veneer of obscurity and secret-clubhouse feel remain intact. The Bovine rooftop, with its thatched roof and classic tiki cocktails – which beat Miss Thing’s, Shameful Tiki and Shore Leave to the umbrella-topped punch by a good couple of years – makes for a perfectly on-theme summer hideaway. Black T-shirted creatures of the night, don’t scatter: cans of PBR are still readily available!