"My life began when I decided to gain as much weight as possible. The moment I chose to become fat, everything changed." 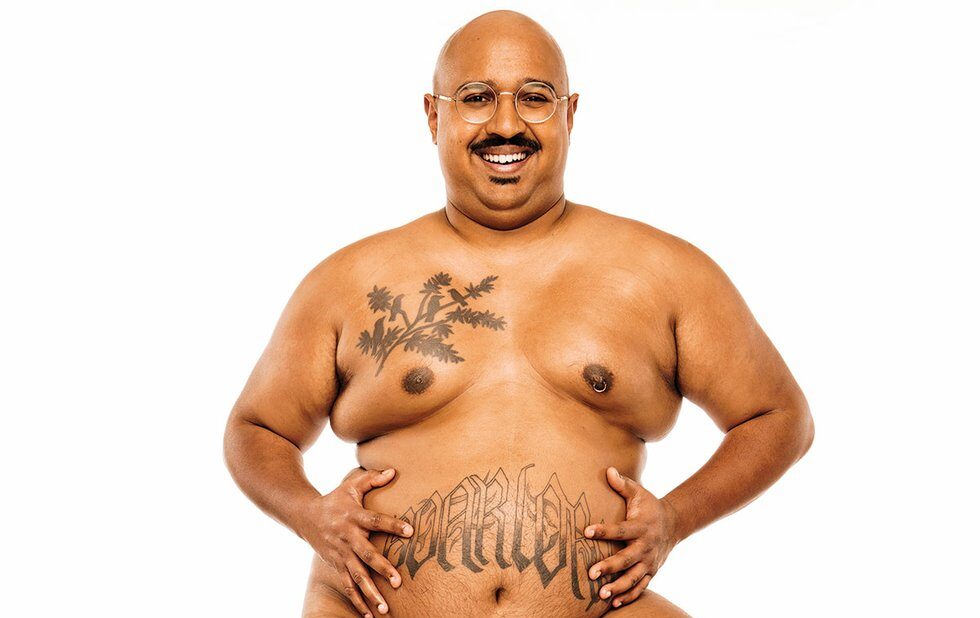 I’m a short, fat, brown, bald man. You don’t see a lot of images of people who look like me outside of very specific corners of Tumblr (R.I.P.). Doing this shoot is part of a larger project: I’m writing a book for Penguin Random House about the future of the fat body. My writing has been exclusively about how we think about a fat body. What I’m working toward is an equitable future for anyone with a non-normative body.

A popular fiction is that your life begins when you lose weight. Only when the pounds are gone, we are told, does the real story begin. A lie, one of many. My life began when I decided to gain as much weight as possible. I don’t much care for stories about self-esteem but the moment I chose to become fat, everything changed.

Yet at the same time I don’t want people to be fooled by astonishment or spectacle. We’re in a time of extreme violence and extreme cruelty enacted on the human body. What does loving yourself mean in that context? Not much. By proudly sharing my fat self I hope to contribute to some tiny fractal of work that broadens our political imagination, that helps us think of entirely new futures, new ways to relate to each other.

I want to dismantle the system that arbitrarily marks one body as valuable and another as surplus. I want slender traitors. The people who despise others who look differently and deny them equal pay, basic human rights and dignity – I want them to be traitors to their preconceived notions of what the body is and isn’t.

For a good portion of my life I was extremely skinny and I hated it. I  was a radio producer working at CBC during the Harper era. I didn’t have a lot of job security. I had just enough money for rent, food for myself and food for my cat. But I was desirable. People found my rib cage sexy and I was starving. That broke me. I had enough and decided to actively gain as much weight as I could.

My confidence and conviction didn’t return from the war – rather, I discovered them for the first time. How I performed at work, how I valued myself and the people around me, how I learned to be present for others, all of that I owe to becoming fat. I love how it feels to walk around. I feel powerful. I feel like I belong to something.

It’s too easy to say “love yourself” and avoid the difficult questions. This system of plunder we’re in – call it capitalism, call it the diet industry or the wellness industry – it devalues the fat body but it’s doing the same to the thin body and the ripped body. It keeps saying, “You’re not enough.”

Visibly showing comfort is a form of power. Creating images where I’m inviting the audience in – you can be here in this moment, you belong – that’s when you have some really interesting conversations. Why do I think I have to go to the gym and break my back? Why am I so obsessed with productivity and optimization? When someone is comfortable with another person’s body, then they can be comfortable with their own.