On a cold afternoon in late February, a small group of teachers, students and activists gathered outside the Ontario Teachers’ Pension Plan office on Yonge Street to offer up a fossil fuel-inspired rendition of Pink Floyd’s The Wall. “Hey, teachers, keep it in the ground.”

When reports emerged last month that Kinder Morgan was in talks with OTPP, the Canadian Pension Plan and others to help finance its $6.8 billion pipeline expansion, which is now due to begin construction in September, the OTPP was slow to distance itself from the project. The OTPP finally denied involvement in the project in a tweet February 27: “Ontario Teachers’ is not in talks to finance Kinder Morgan pipeline expansion.” Ontario Teachers’ also quietly ditched its Enbridge stock back in September in the face of violent police crackdown on protests in North Dakota over the gas giant’s $1.5 billion stake in the contentious Dakota Access Pipeline. 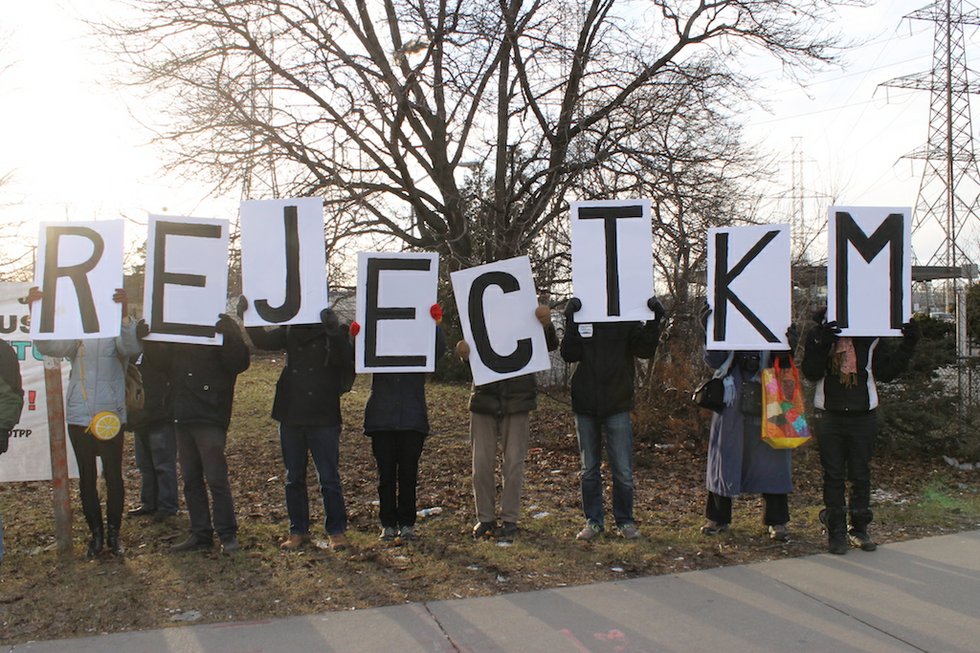 It’s also got shares in Exxon, but as Toronto350.org’s Brian Young tells NOW, those shares became “invisible” in 2015 when OTPP raised the threshold for public reporting on its investments to $150 million.

While OTPP has become the focus of recent divestment efforts, the Canadian Pension Plan is even worse, environmentally speaking, says John Bennett, a senior policy advisor with Friends of the Earth. Bennett says, “If you look at what they bought in recent years (the Devon Energy Pipeline, Encana and Western Petroleum) they were literally bailing out big Canadian oil companies.”

Besides investments in Enbridge, Kinder Morgan, Exxon, Chevron and more than 30 coal companies, more recently, Bennett says, the plan “has gone on a fracking binge,” buying up all of Encana’s assets in Colorado, including 95 per cent of the Denver-based energy giant, the Broe Group.

Given the current depressed state of oil markets – Royal Dutch Shell sold its assets in the oil sands this week – the real question is how prudent is it for  the OTPP and CPP to continue to invest in fossil fuels.

OTPP and CPP did not respond to interview requests from NOW, but both have been public about their preference not to divest from fossil fuels completely. The OTPP maintains on its website that, “Engaging with companies directly is more effective and constructive than divestment, because we can use our influence to encourage changes in corporate practices.”

The CPP emphasizes its support for climate change-related shareholder resolutions on its website. “We do this because we recognize that climate change has the potential to significantly impact our investments. As an engaged owner, we believe we can have a powerful influence on the companies in which we invest.”

Interestingly enough, Canadian pensions have actually been credited with boosting responsible investments in this country. The Responsible Investment Association reported recently that pension fund assets account for 75 per cent of the Canadian responsible investment industry’s growth over the past two years, thanks in part to new regulations in Ontario that require pension plans to disclose whether, and to what extent, environmental, social and corporate governance factors (ESG) are considered when making investments.

But Fry doesn’t buy it. “Engagement works in some sectors, like forestry – there are more sustainable ways to do forestry than others. But when it comes to burning fossil fuels there’s no better way to do it. It’s all bad. We just need to stop.”

Happening in Toronto: An open conversation about Black motherhood