This 7.5 kilometre walk takes you from East York to North York, with the cool DVP sculptures in between 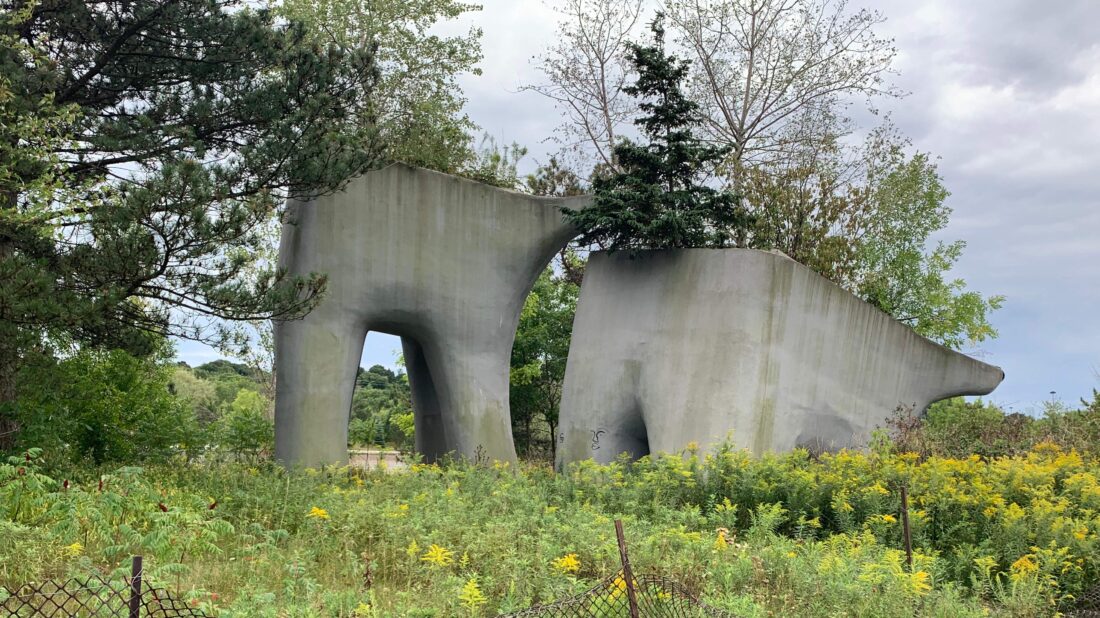 Giant molars or a herd of elephants? You decide.

Uh-oh. The chill of autumn is already in the air. Before we’re all forced to hibernate like masked moles, make sure you take advantage of the fresh air to clear your head and boost your spirits. In this series, I explore some of the city’s parks and streets. This week: East York’s Taylor Creek Park and the adjoining E.T. Seton Park, which will take you from the easternmost part of Danforth Village up to Eglinton and Leslie.

It’s about a 10 minute walk north from Victoria Park subway station to the wooden staircase leading down to the easternmost part of Taylor Creek Park. From there it’s possible to travel northeast to Warden Woods, or, more likely, west and then north to Sherwood Park (at roughly Yonge and Lawrence) or south all the way to the Lower Don Lands.

It’s essentially a choose-your-own-trail experience. Since I was heading up to Eglinton for dinner, I decided to take the northwest route, which resulted in a pleasant, moderately difficult and somewhat generic walk.

There are various entryways for this massive trail. Many of them utilize stairs, but where there’s vehicle parking (Don Mills, Haldon and Dawes) wheelchair users should be fine. The surface is mostly asphalt, and at least for the Taylor Creek Park section there aren’t many steep hills.

E.T. Seton Park is a little harder to access, with a southern parking spot off of Don Mills and a northern one near Eglinton, accessed from Leslie. Because of the current Eglinton Crosstown LRT construction, I had to hike up a cluttered, garbage-strewn hill and navigate concrete dividers to get to Eglinton, which added some drama to the walk.

What you can see, and who’s there 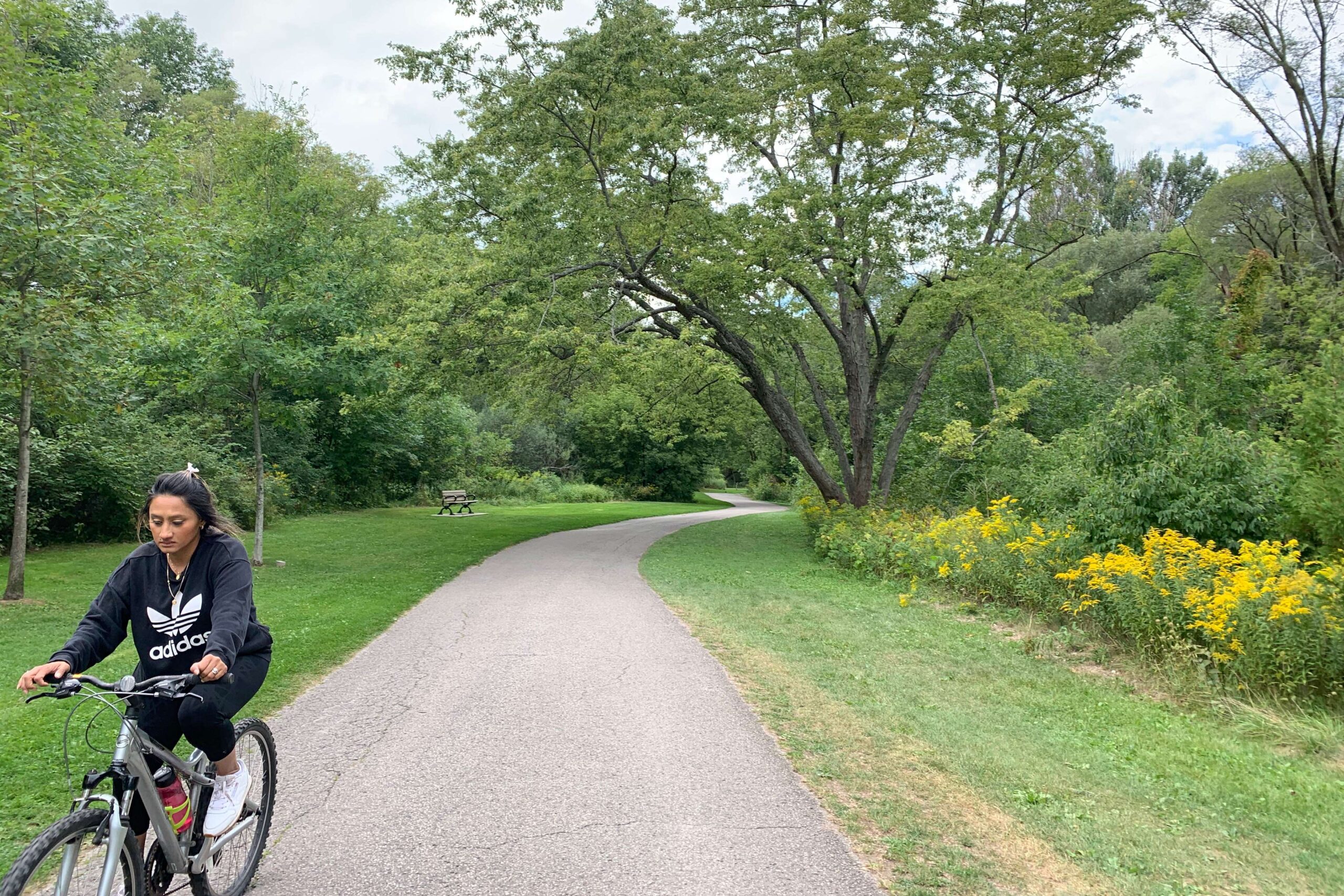 Taylor Creek Park is beautifully maintained but a little dull.

Taylor Creek Park is beautifully maintained. The grass looks neatly trimmed, the trails have ample signage and there are garbage cans strategically located along the path. But it’s a little repetitive.

I went on a sunny Saturday, so the path was busy with couples, groups and young families – there were many strollers. (There’s a tougher, and more private, hiking path just across the creek.) But soon we were overrun by obnoxious cyclists coming from both directions. One spandex-clad Tour de France wannabe yelled at me that I was “hogging the fucking road” and I told him he could ride on the fucking grass. Nature brings out the best in people, doesn’t it? 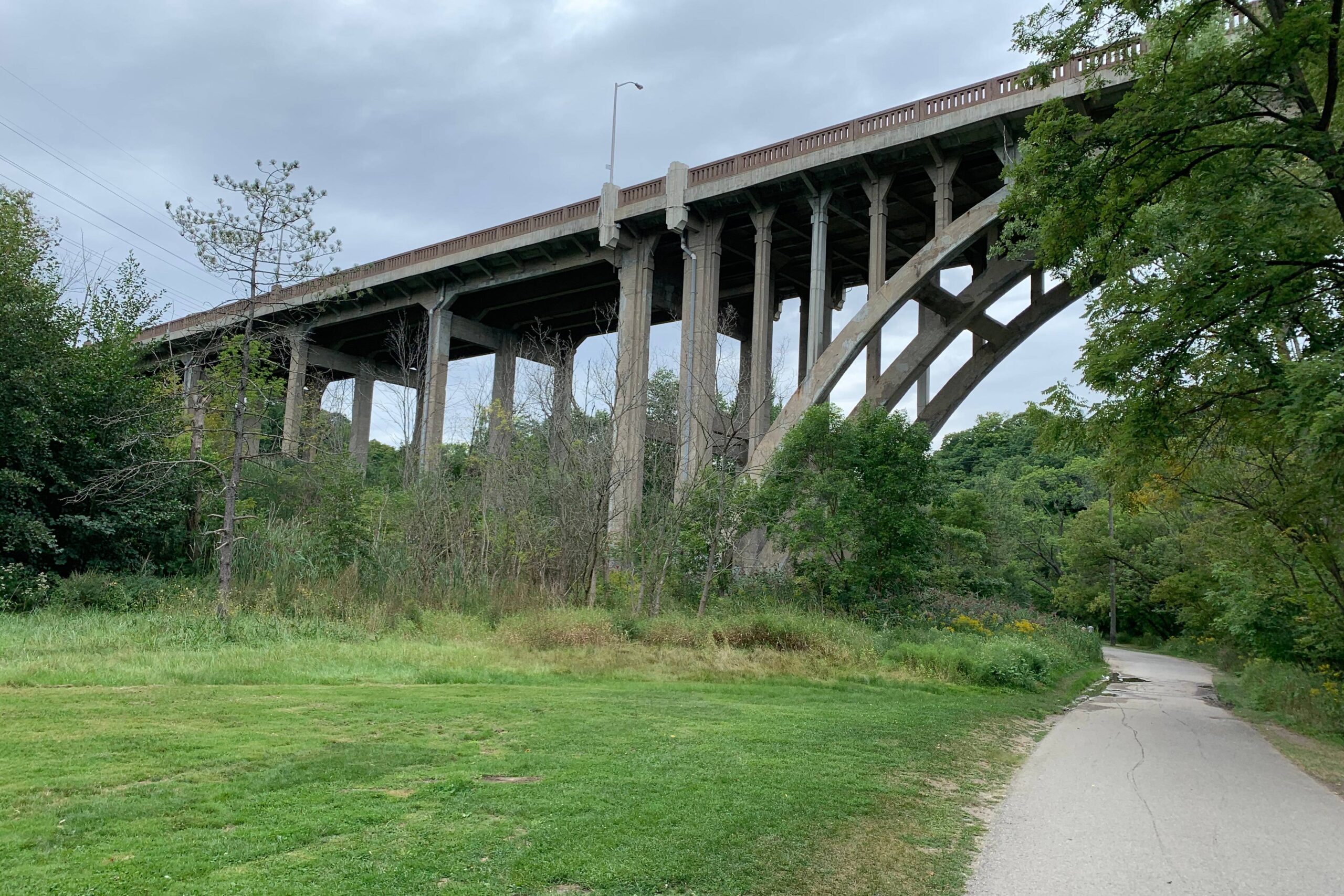 The bridge under O’Connor provides some variety to a somewhat monotonous walk.

The bridge on O’Connor provides a dramatic sight. As I passed, I noticed a couple doing an impromptu photo shoot against the modest graffiti on the girders.

A few sections of the trail were flooded, so signs gave us alternate routes on higher ground. Helpful! 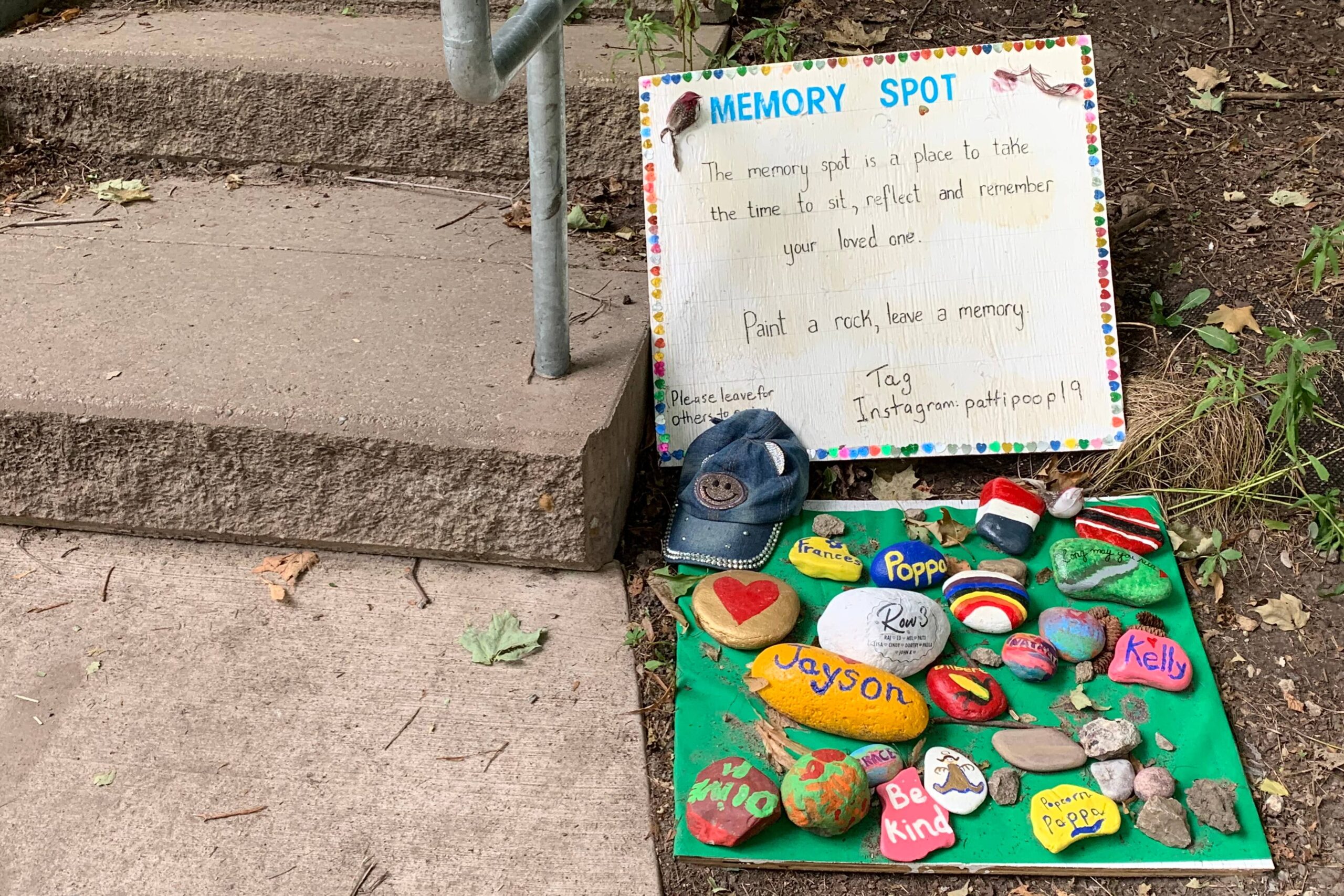 A Memory Spot reminds you to forgive obnoxious cyclists.

Further on, I spotted a poignant little Instagram-friendly “Memory Spot,” for people to “sit, reflect and remember your loved one.” Oddly fitting during the pandemic. When I saw a painted pink rock saying “Be kind,” I instantly regretted yelling at the cyclist.

Giant molars or herd of elephants?

As the park ended and I passed beneath the Don Valley Parkway, I encountered one of the most iconic images in the city: the series of six sculptures that resemble giant molars or a herd of elephants. These pieces by Canadian artist Noel Harding use solar power to draw water from the Don River and filter it to hydrate the trees and plants in the surrounding wetlands.

Then I entered E.T. Seton Park, named after the famous writer and wildlife artist Ernest Thomas Thompson Seton, whose dubious achievements include appropriating what he thought were Indigenous elements into the traditions of the Boy Scouts of America.

This park felt more spacious and spread out. Many families had set up picnics. Groups of people tossed around a frisbee. There was a much-needed public restroom. Beyond the asphalt and gravel path, I could see little pathways and trails leading… who knows where? Apparently there’s a nature preserve somewhere. Maybe next time. 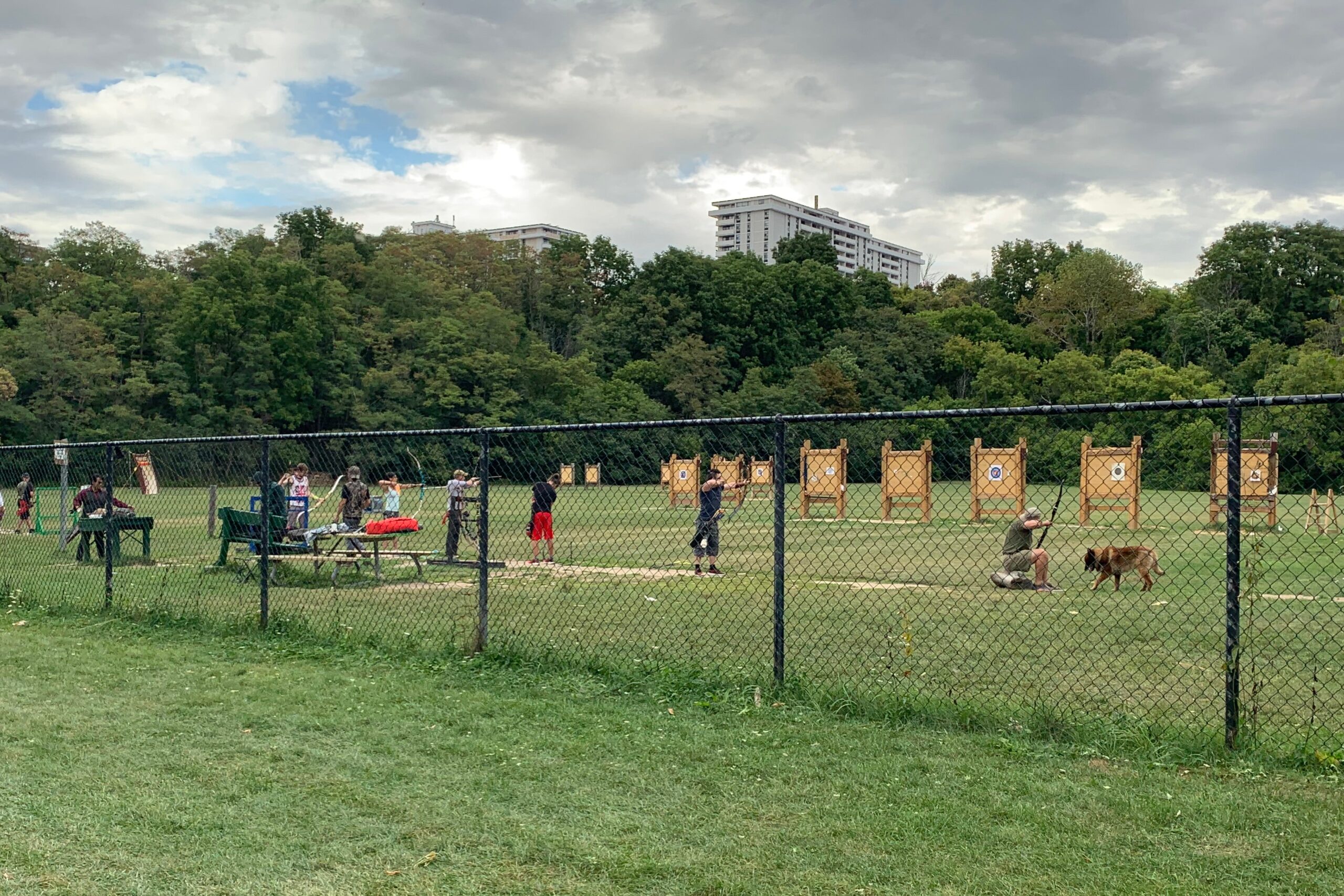 Aspiring Katniss Everdeens do their thing at the ET Seton Park archery range.

I did, however, pass an unsupervised free archery range, which is used by everyone from Olympic athletes to aspiring Katniss Everdeens. (Crossbows are forbidden.) And I also encountered the nicest view of a creek during the whole trip.

As I mentioned before, Eglinton is currently a mess, so leaving the trail, which would have taken me up to Sunnybrook Park and beyond, was a challenge.

While there wasn’t a lot to look at during the nearly two hours it took me to walk the 7.5-8 kilometres, I’m glad I went. I’d definitely return to E.T. Seton Park in a month or so to see the autumn leaves. And perhaps by then there’ll be fewer cyclists jamming up the trails.